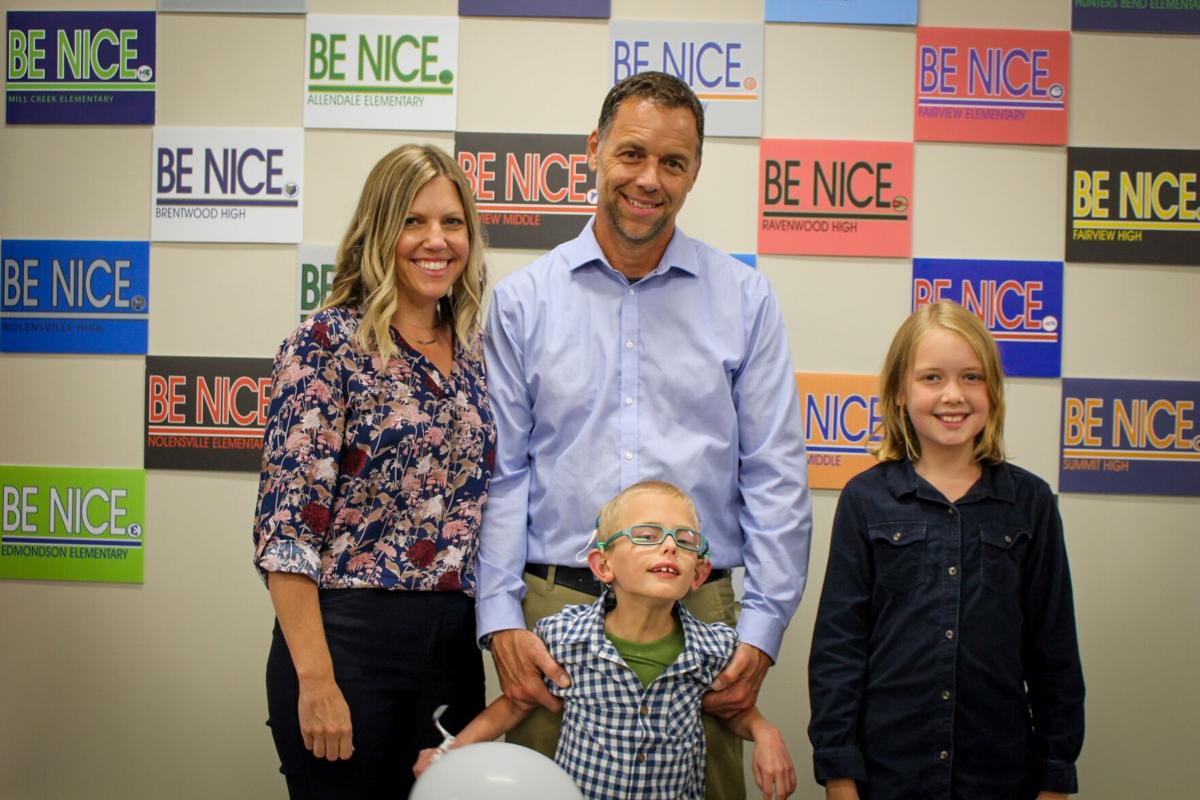 Jennifer Aprea was joined by her husband, David, her daughter, Dani, and her son, Ryan, on Sept. 9 when she was sworn in as the new District 5 representative on the Williamson County Schools Board of Education. 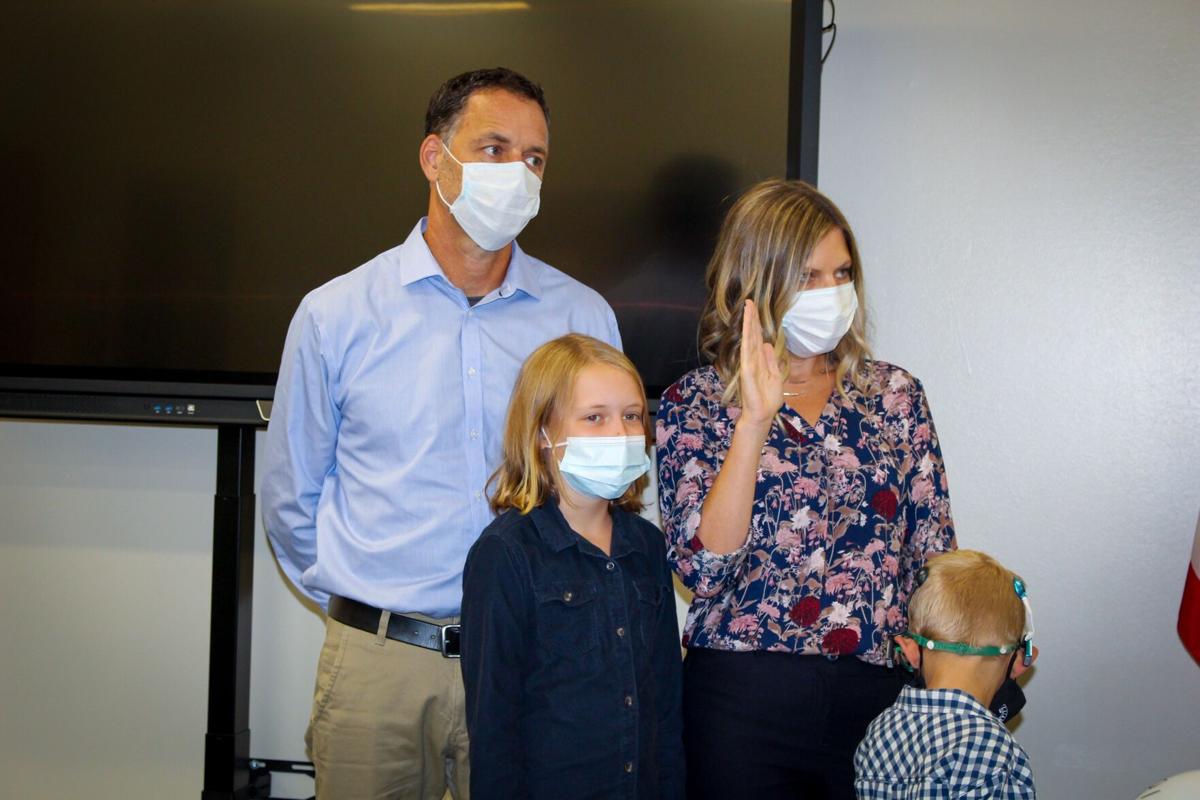 Jennifer Aprea takes her oath surrounded by her family as she officially enters the school board office. 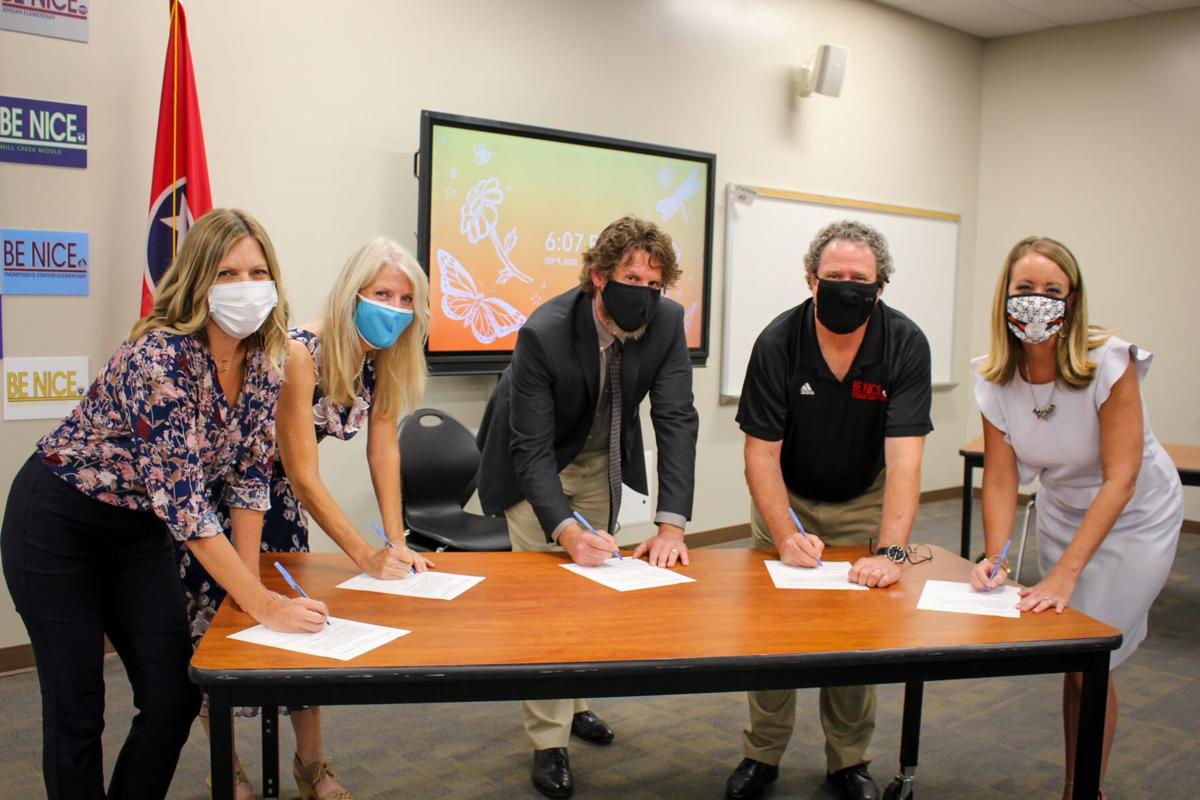 Jennifer Aprea was joined by her husband, David, her daughter, Dani, and her son, Ryan, on Sept. 9 when she was sworn in as the new District 5 representative on the Williamson County Schools Board of Education.

Jennifer Aprea takes her oath surrounded by her family as she officially enters the school board office.

The job has officially begun for the only new member of the Williamson County Schools Board of Education.

The beginning of Jennifer Aprea's term is a bit unconventional. However, in the midst of a pandemic that seems to place the email inboxes of government officials in high demand, she is committed to remaining approachable to parents and having open conversation as she steps into her new role.

“It is probably the most interesting time you could ever have to join school board with everything going on in the world, but basically, I’m still getting my footing,” Aprea, who represents District 5, said.

Aprea said she's been working on getting the lay of the land and developing relationships with her fellow school board members and the families in her district since she was sworn into her position on Sept. 9.

She is no stranger to public education, having served as a public elementary school teacher for 12 years before launching her own business when she started a family with her husband. She has also served on the parent-teacher organization board at her children’s elementary school for the last few years.

Aprea has a daughter in fourth grade and a son in second. Her son was born 3.5 months before his due date and has visual and hearing impairments, so for the last eight years, Aprea has also been an advocate for children with disabilities. This led to her current full-time job at The Arc of Tennessee, a nonprofit advocacy organization for people with intellectual and developmental disabilities, as the director of family engagement in special education.

“I think it is a benefit to all students to have someone on the board who has that unique perspective, not just as a parent to a child with disabilities but also as a former classroom teacher,” Aprea said.

She also brings a unique perspective as a parent with a daughter enrolled in WCS Online and a son learning on campus this year. She said she appreciates being able to not only understand what parents are going through during this challenging time, but also see and hear what students and teachers are going through as she helps her kids through this year’s adjustments.

Aprea said so far, her family has had a good experience with WCS Online for her fourth-grader. She did bring up in a recent school board meeting, though, that some online elementary students have missed the social interaction that typically comes in the classroom setting.

“I had signed up as my daughter’s virtual room parent for this year, so (after that meeting) they had sent out something to the room parents … so that we could start planning social events in the virtual classroom maybe during the lunch period or as we come up on winter break celebrations or birthdays for the teachers — things like that,” she said.

Aprea added she has also heard about plans for book clubs, study groups and similar activities for online middle- and high-school students as well.

With Gary Anderson, her predecessor as District 5 board member, retiring from the school board after 30 years, Aprea said she has “some big shoes to fill,” sharing that she hopes to take after him in his commitment to WCS students.

“He’s just done a lot for kids with disabilities, and he’s done a lot for the music program,” she said. “He just quietly does a lot of work behind the scenes, but he always put students first.”

One way Aprea has already started to involve families in her work is by encouraging parent communication on her social media platforms.

On Tuesday, a pilot asynchronous learning day for middle- and high-school students on campus, she posted on her Facebook page, asking parents for feedback on how it went.

“The board may vote in the future on whether or not schools should include more of these asynchronous days throughout this very extraordinary year,” she wrote. “Please email me if you’d like to share your thoughts on how this day went for your family.”

Aprea said she got a lot of mixed feedback on the day.

“Most people, by a slight majority, are in favor of it, from what I’ve seen at least in District 5,” she said. “They said they enjoyed having that day off, but they would prefer it be on a Monday or a Friday so that it backs up to the weekend and just asking for more consistency in the work that was assigned so that some kids don’t end up with 20 hours’ worth of work and some end up with 30 minutes.”

She shared that continuing communication with families is a goal of hers moving forward.

“I am very approachable. I am not somebody you can’t reach out to and talk,” Aprea said. “I love having conversations. I particularly love when there can be a correction of misinformation or rumors that are being put out there. If there’s ever any questions, come to me because I’m forthright and honest, and if I don’t know the answer, I will always go and try to find out.”

Jennifer Aprea continues to update her Facebook and Twitter accounts and can be reached directly at jennifer.aprea@wcs.edu.