At Franklin’s Board of Mayor and Aldermen meeting Tuesday, city leaders took the first steps toward creating a permit system for protestors and those wanting to hold public gatherings.

The language of the ordinance would require group gatherings of 20 or more for the purpose of public expression to obtain a free permit from the city a minimum of two days prior to the event.

On the first of two readings, aldermen voted unanimously to advance the ordinance. Ward 2 Alderman Dana McLendon, who has previously been critical of the ordinance, was not present at the meeting.

The proposal was first brought before the board in November of 2019, initially spurred by the 2017 white supremacist rally in Charlottesville, Virginia that ended violently.

“What we are trying to do is provide for the use of public space for that expression. And I don’t think there’s any other way to provide for but through some form of permit,” City Administrator Eric Stuckey said. “If you don’t have a permit, then you don’t have the ability to allow for it.”

He explained that by creating a permit system, the city can more effectively monitor when and where citizens are gathering, helping to protect them from counter protestors and ensuring continuous movement through what may be a heavily trafficked area (like town square).

“It is a permit that has a very low threshold for approval,” Stuckey added. “We don’t get into the content. Really, we are just looking at timing, availability and safety concerns.”

There is a loophole in the ordinance that allows for spontaneous gatherings without a permit in response to breaking news events.

“‘Spontaneous’ is still kind of a defined term, meaning it has to be something that happened in recent news,” City Attorney Shauna Billingsley said. “I would say that most of the things happening right now are based on recent news.”

For those who are planning a protest in advance, the city would require a permit application, retaining the authority to ask protestors without an application to reschedule.

Without the permit, “if someone wants to come and counterprotest you at the same time, we can’t move them off the square,” Billingsley said.

Alderman Clyde Barnhill said he didn’t see why citizens had to protest on town square in what might amount to an “inconvenience” for other citizens.

“I’m failing to understand why we are not able to direct them to any public property we have within the city,” he said.

“Location is speech too,” Stuckey cautioned, noting the city can’t control the place of a protest.

City leaders say the ordinance is motivated by safety concerns, but those opposed say it infringes upon free speech rights. Stuckey said he has spoken with several protest organizers in an attempt to better understand their concerns.

“There have been some that have been critical to say this restricts speech,” Stuckey said. “I actually believe it facilitates it. It provides for a mechanism to have it happen, have it happen in a safe way.”

Alderman Margaret Martin said she supported the measure because she wanted to avoid a situation like the May 30 protest in Nashville that devolved into rioting.

“You all are acting like and talking like there isn't going to be any problem with demonstrators,” she said. “I hope you're right, but if there is any commotion and there is any disruption there, I want our police to be able to do what they have to do under the umbrella of the city.”

Both Billingsley and Stuckey pointed out that local law enforcement currently hold that power, permit or not.

"I don't ever want anything to happen like happened in Nashville." Martin said.

On the meeting's Facebook livestream, Brad Williams commented, "Is a permit going to stop it from happening here?"

Read the full ordinance and other related materials from the board's meeting below. 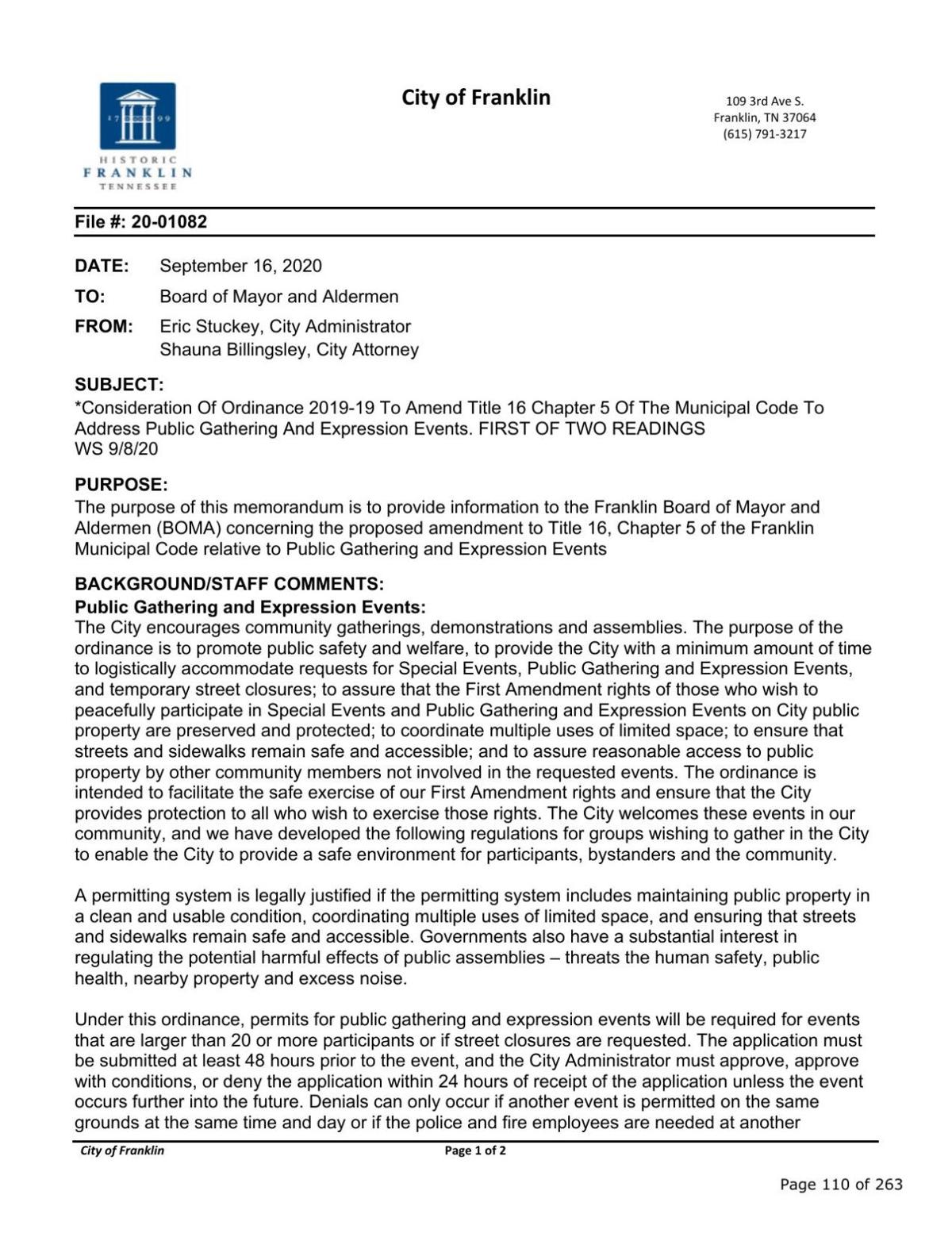