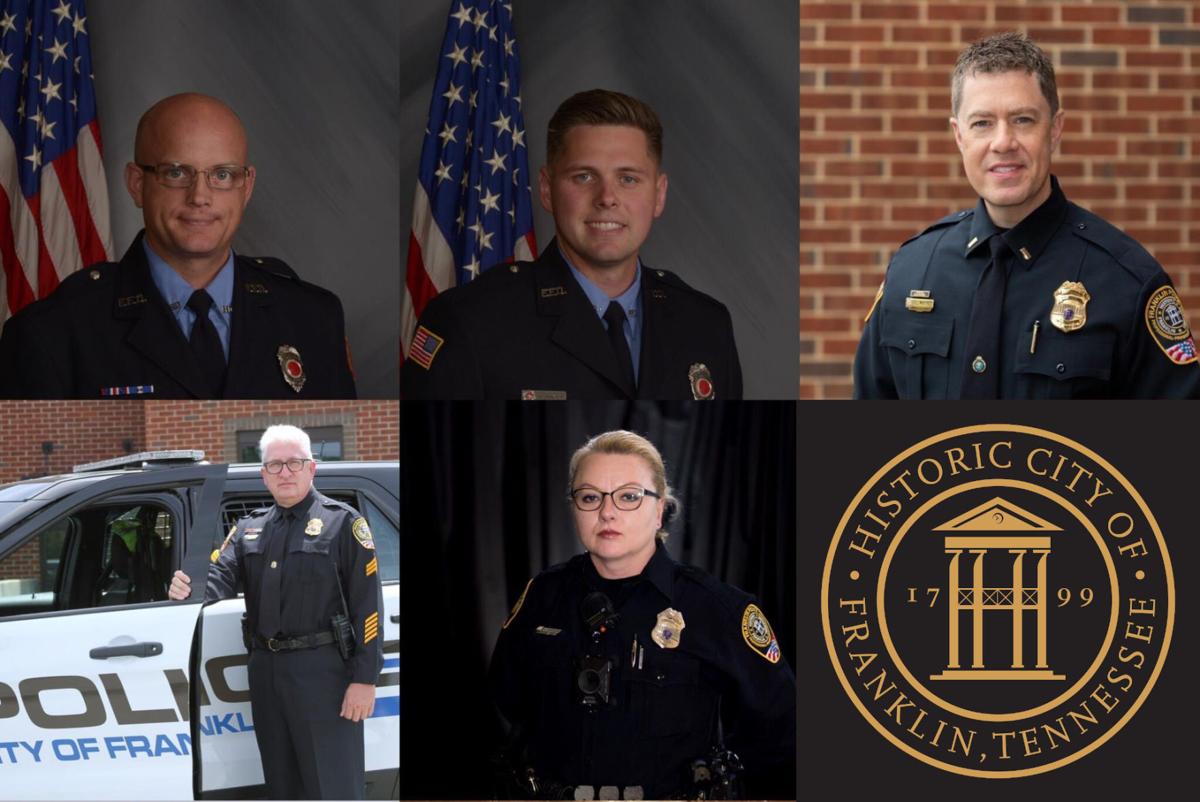 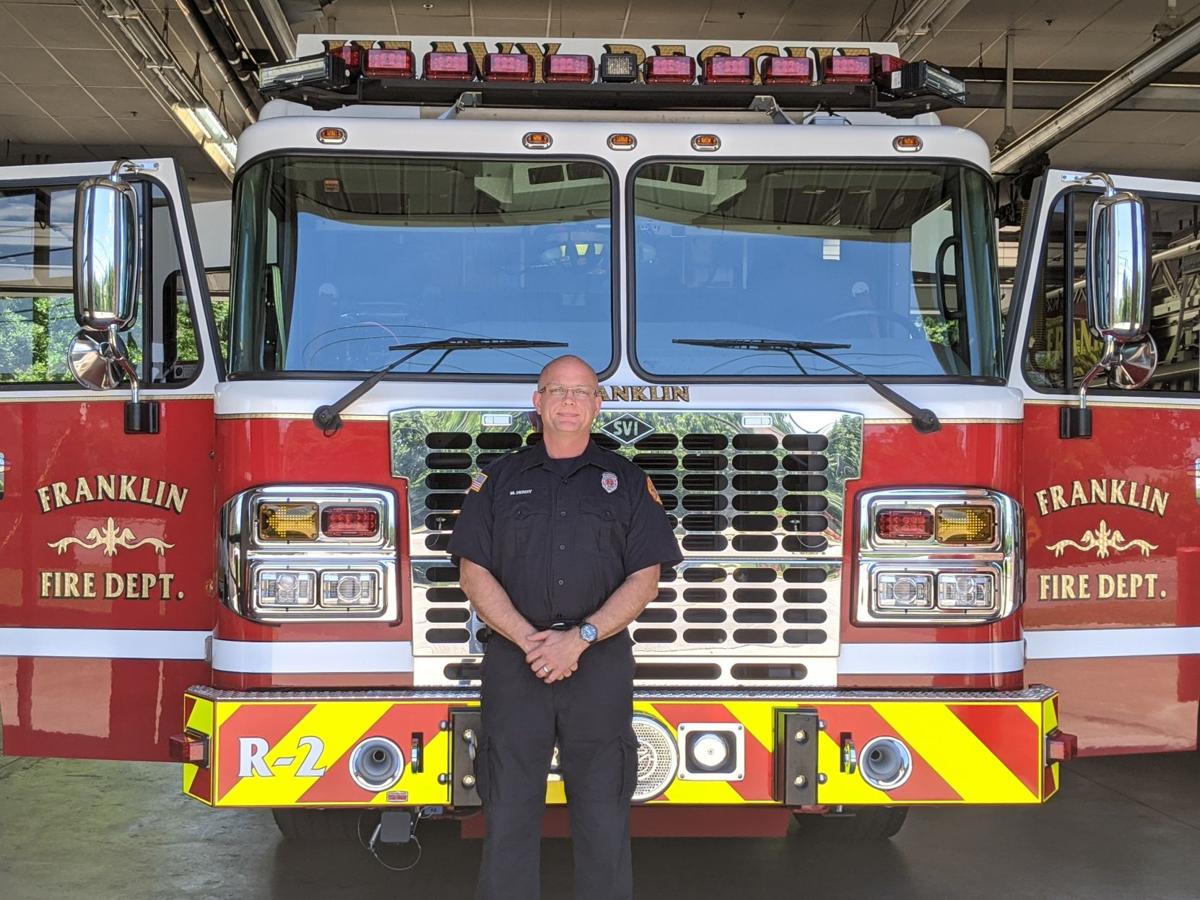 Michael Henry of the Franklin Fire Department leaned over the railing of the I-65 overpass on Bakers Bridge Avenue to save a man considering suicide alongside four other first responders and four citizens.

Michael Henry of the Franklin Fire Department leaned over the railing of the I-65 overpass on Bakers Bridge Avenue to save a man considering suicide alongside four other first responders and four citizens.

This week, the Williamson Herald is honoring first responders and their service to the people in the community. Just over one year ago, the Franklin Police and Fire departments worked with the people and for the people and ended up saving a life.

For this teamwork during an emergency, the Herald, Full Service Insurance and Grange Insurance are presenting five Franklin first responders with a Community Hero Award.

“It is clear that the intervention by selfless citizens and the prompt and professional response shown by the Franklin Police Department and Franklin Fire Department saved the life of this individual contemplating taking his own life,” said Patrick Baggett, vice president of Full Service Insurance. “The Franklin Police and Fire departments have the highest professional standards, and in this circumstance, their training and the help of four citizen heroes saved this man’s life. They are well deserving of the Community Hero Award.”

In late February of 2019, a man drove onto the Interstate 65 overpass on Bakers Bridge Avenue, stopped his car in the middle of the road and climbed on the other side of the railing, standing a few dozen feet over the interstate as he contemplated suicide. Seeing the danger this man was in, four citizens stopped where they were and held onto the man, speaking to him and trying to stay calm.

Warner said he had been driving to get some lunch when he heard about the man on Bakers Bridge, close to where he was. He immediately dropped his plans and drove to the overpass.

What Warner would’ve witnessed not long before he arrived was Mullins taking the place of one of the citizens holding onto the man and curling his arm through the railing to hold him up in case the man removed his feet from the concrete ledge. Later, when the firefighters arrived, Henry slipped his own legs through the railing and leaned over the ledge, with his head toward the highway below, to grab onto the man’s pants in an effort to pull him up. As he did this, Engle held onto Henry to keep him from falling over the edge.

“I actually only grabbed him one-handed, and we tried to pull him up, and he was so heavy we couldn’t get him up,” Henry said. “I went back over and grabbed with both hands, depending on Brad to hold me. I mean, if he let go of me, I’d have fallen.”

Engle said when they grabbed onto the man, he had dropped his feet from the ledge and let them dangle over the highway, and when the group tried to pull the man back onto the bridge, he had wedged his feet underneath the overpass to prevent the group from lifting him.

“I think that just goes to show how desperate of a mindset that this guy was in,” Engle said.

Eventually, the group was able to successfully bring the man to the safe side of the railing, continuing to struggle with him as he expressed his desire to jump until EMS was able to take him to the hospital.

The first responders shared that the four citizens who intervened at the beginning of this incident are a large part of the reason the man was saved, commending them for their calm approach and selfless actions.

Additionally, Henry, Engle and Warner shared that the large amount of training first responders undergo throughout their tenure prepared them for situations like this. Henry said he hopes citizens see their commitment to safety and realize, even if they do see police or fire vehicles seemingly sitting idly, a lot of the time first responders are training behind the scenes to prepare for the next call of duty.

“It’s what you don’t see that we do like training for two hours every shift or going to classes to better ourselves or going down to our training center and cutting on already wrecked vehicles to get extrication expertise,” Henry said,

Henry’s glad they were able to save the man’s life and hopes he is doing better today, sharing that one of the toughest parts of his job is having to move onto the next call and not hearing what happened next.

“Some of the saddest things that we have to deal with — I’ve been doing this for 25 years — is not knowing what happens to people after you drop them off at the emergency room or leave the scene of a call,” he said.

Warner said he believes when people are given another chance, their minds often change.

“People do change their minds, and they do realize that this isn’t the best or only solution,” Warner said. “I think in most cases, people that find themselves in those situations are forever grateful for a second chance to have a different perspective, and what a joy it is to be a part of a group of difference-makers.”

Warner shared he thinks God puts people in the right place at the right time to make a difference.

“He certainly did that day on that bridge and probably a hundred times over throughout our city and county throughout the year,” he said.

To learn more about the Community Hero Award, including how to nominate your local hero, visit williamsonherald.com/site/full_service_insurance_community_award.html.