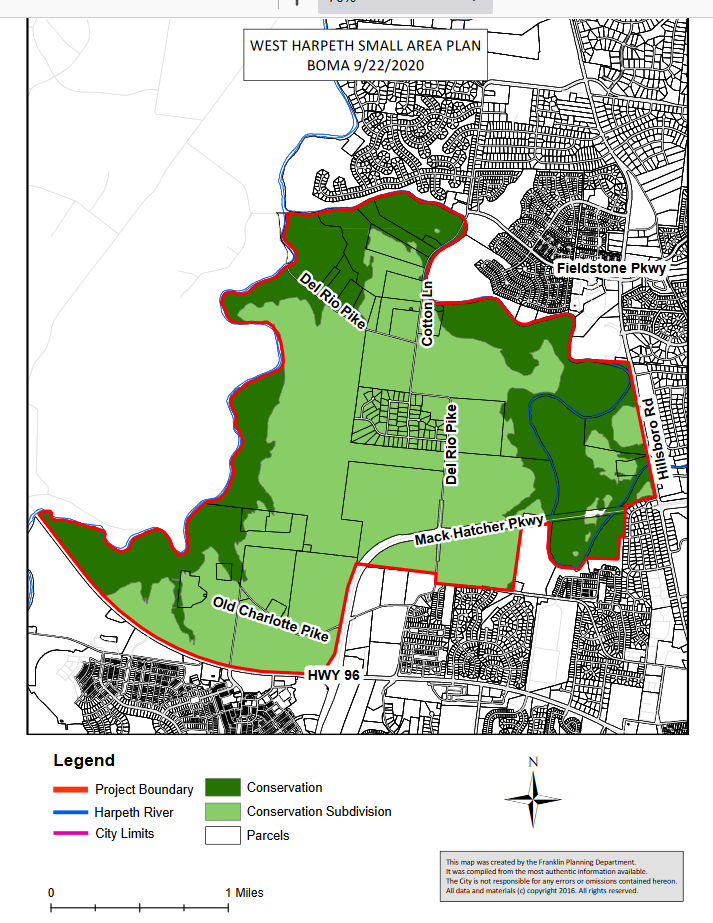 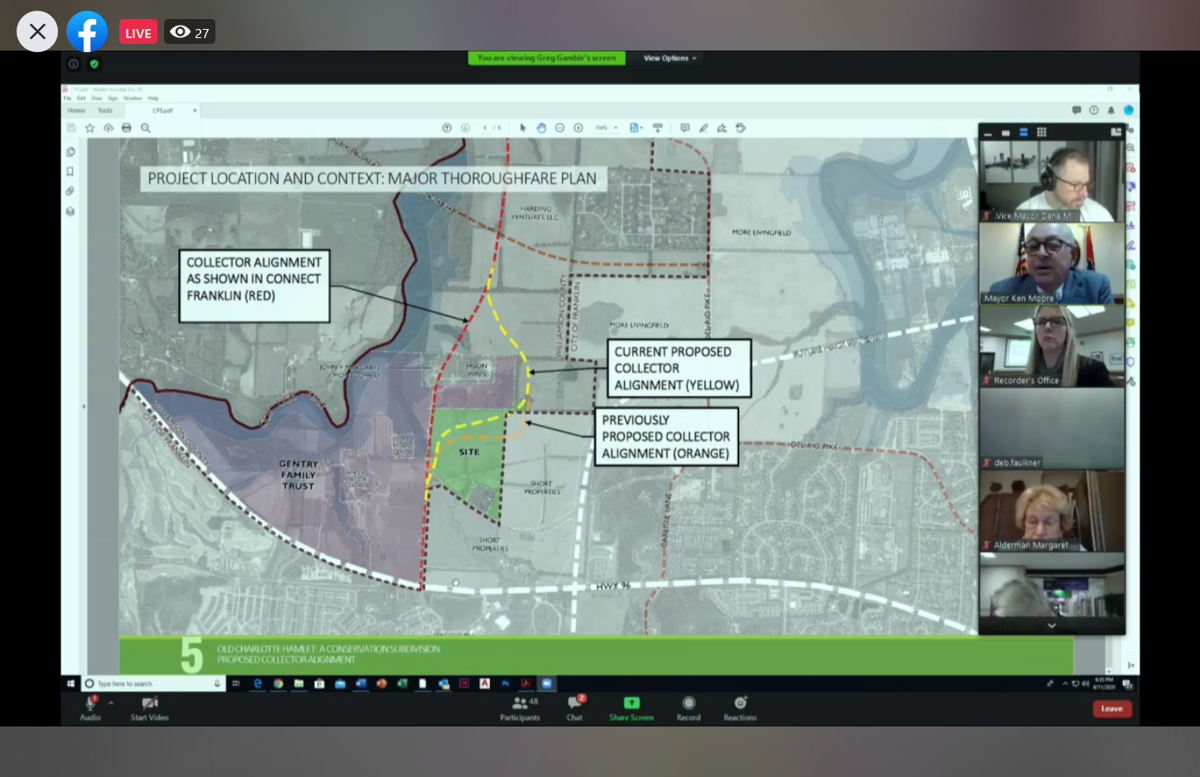 A screenshot from the Franklin Board of Mayor and Aldermen meeting shows the proposed connector road now planned to edge around the Gentry property.

A screenshot from the Franklin Board of Mayor and Aldermen meeting shows the proposed connector road now planned to edge around the Gentry property.

As the new section of Mack Hatcher Parkway nears completion, the conversation about preserving open spaces on Franklin’s west side has ramped up.

After several discussions pertaining to future developments in a section known as the West Harpeth Sanitary Sewer Basin, Franklin’s Board of Mayor and Aldermen came close to a vote on Tuesday night, but ultimately deferred until Nov. 11 in an effort to seek further clarification on ramifications of plan options.

City staff offered aldermen three options to choose from when considering the area’s potential for development.

Most aldermen expressed support for the third option, which would have the planning commission create a small area land use plan for the region.

The second option, which a few aldermen also supported, would update the city’s infrastructure plan, including sewer and transportation networks, in the area.

The area in question is west of the new section of Mack Hatcher between Hillsboro Road and New Highway 96 West. It includes Brownland and Gentry's Farm.

Both of the recently proposed developments are now on hold, said city Planning and Sustainability Director Emily Hunter.

“We cannot accept their submittals until their full plan is completed,” she said, especially with policy changing.

City leaders all agreed on the need to look more closely at how development will impact a part of Franklin that remains pastoral.

“Things are never going to remain the same, and it’s our job to grow wisely and provide a wonderful life experience for our citizens,” said Brandy Blanton, at-large alderman.

Ward 4 Alderman Dana McLendon called it a “100-year decision,” the effects of which will ripple outward.

“In the absence of a small area plan, we have one property owner after another coming in to negotiate what is best for them,” he said. “We don’t know necessarily what kind of road alignments might make sense, if we had sat down and done one comprehensive plan.”

With the small area plan, those affected by potential developments would “have a front row seat” to discuss their concerns with the BOMA, McLendon said.

“I also have uneasy feelings just about the conservation subdivision,” Ward 1 Alderman Bev Burger said. “I would ask that my fellow aldermen do the same for the east side of Franklin as well, and not just leave this as an island unto itself over here.”

“I do not see us doing anything like what the people who have been talking about leaving this basically undeveloped. I do not believe that would be possible,” she said.

Hunter pointed out that the board would still retain the right to approve future developments.

“The guidelines in Envision Franklin are a policy, but they’re not requirements, like what’s in the zoning ordinance, and we do not have a conservation subdivision zoning district,” she said.

With the small area plan, Hunter said the board would see any development first before receiving a vote from the planning commission.

Ultimately, the motion was deferred until the Nov. 11 meeting, with aldermen seeking further clarification on the small land use plan.