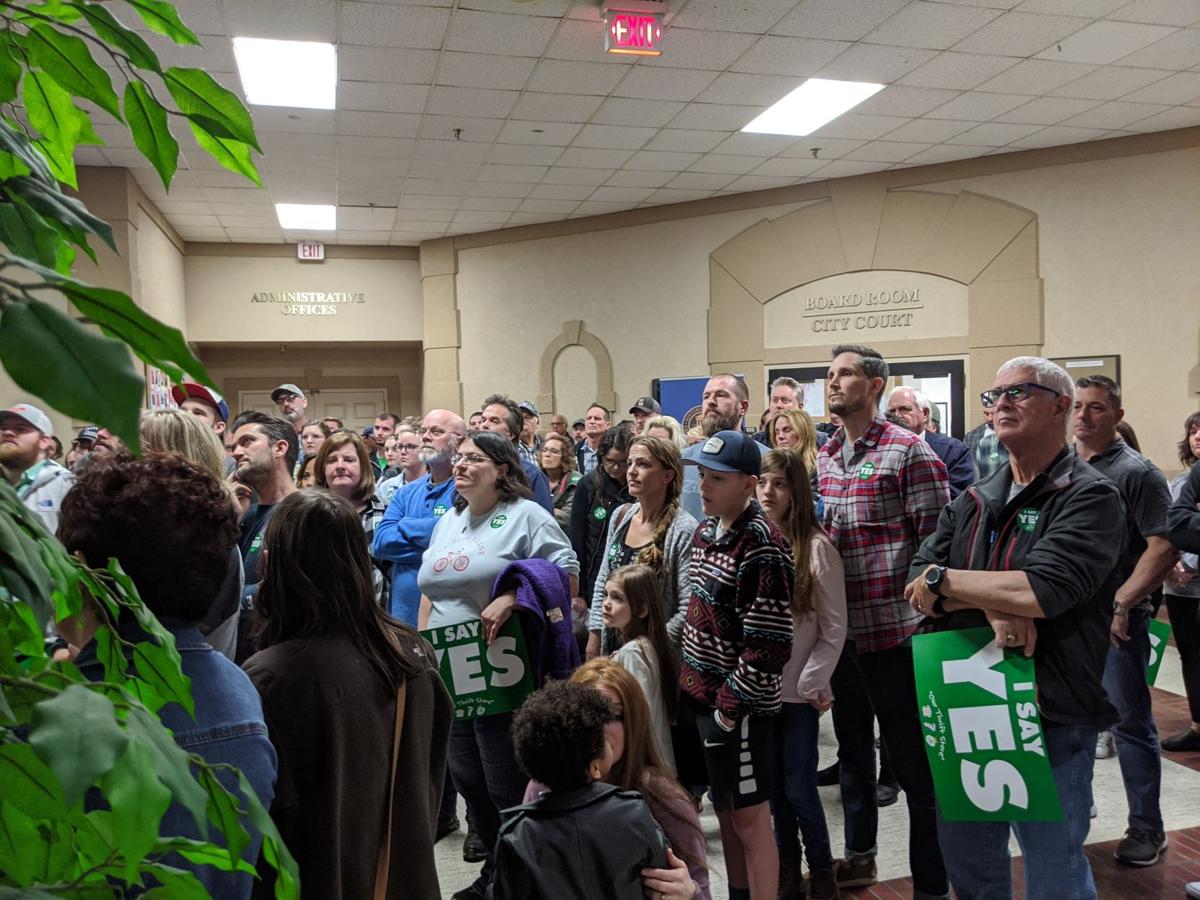 Hundreds of people gathered inside and outside the Franklin City Hall Board Room for the Board of Zoning Appeals meeting, where the city would decide whether or not Our Thrift Store would be allowed to build a facility in a civil institutional zone. 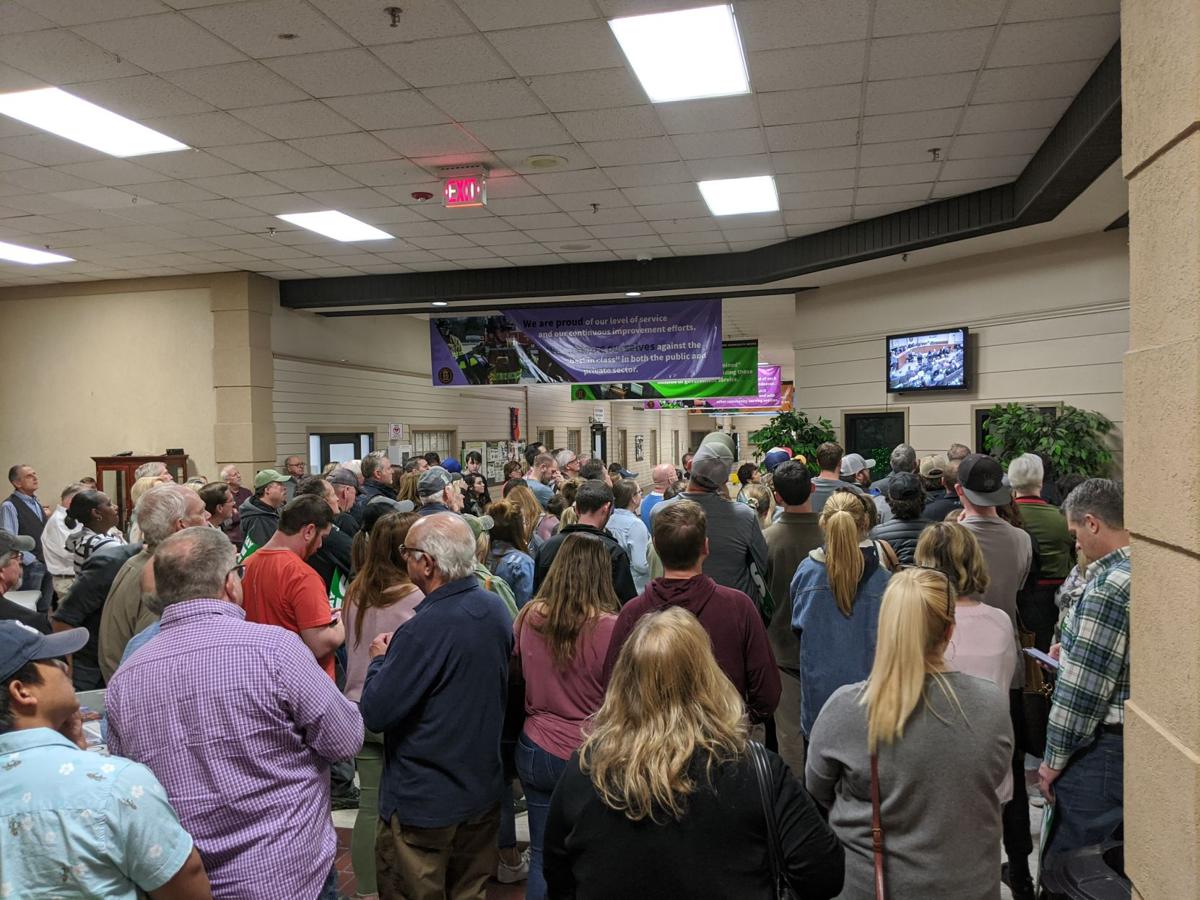 Supporters and opposers, overflowing out the doors of the board room, gathered around the television in the lobby, where the meeting was streamed. 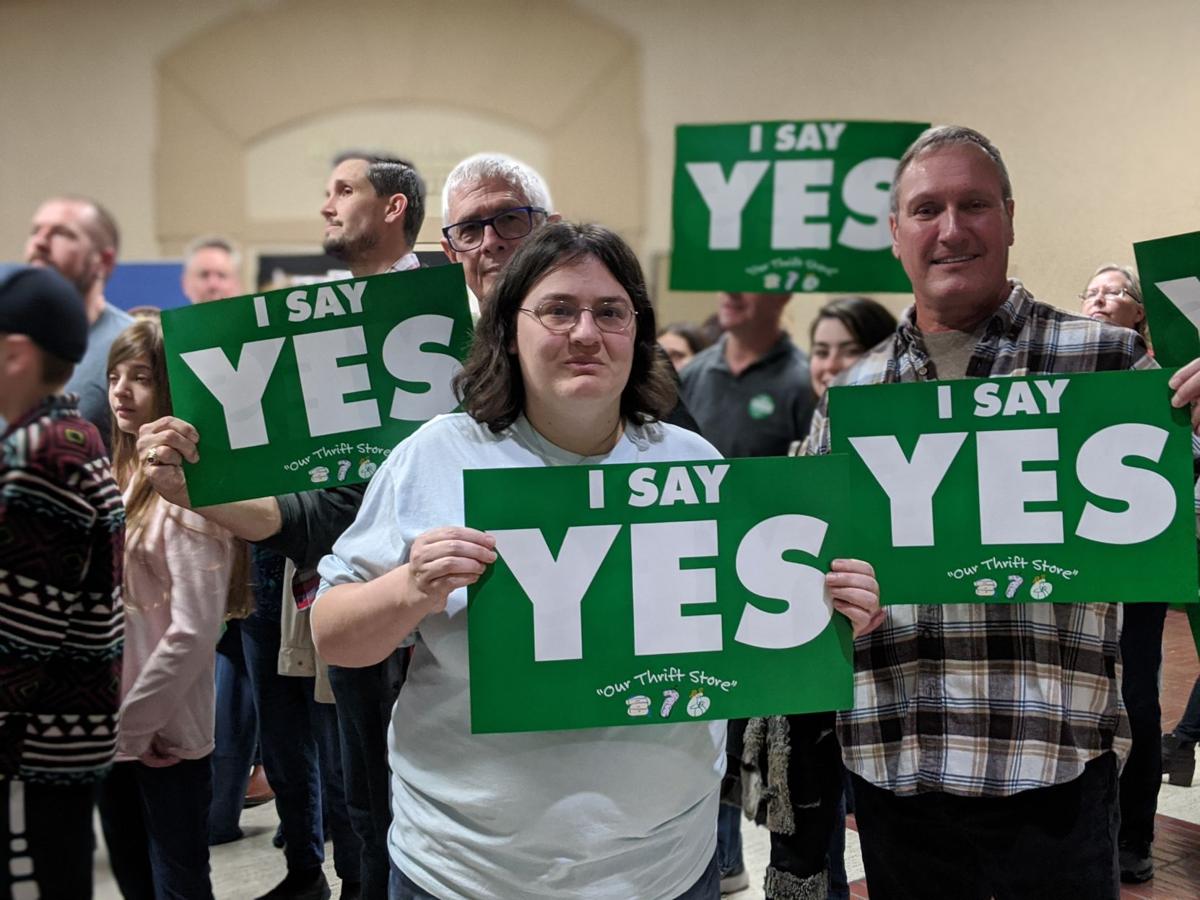 Supporters of Our Thrift Store’s appeal wore stickers and held signs that read, “I say yes.” 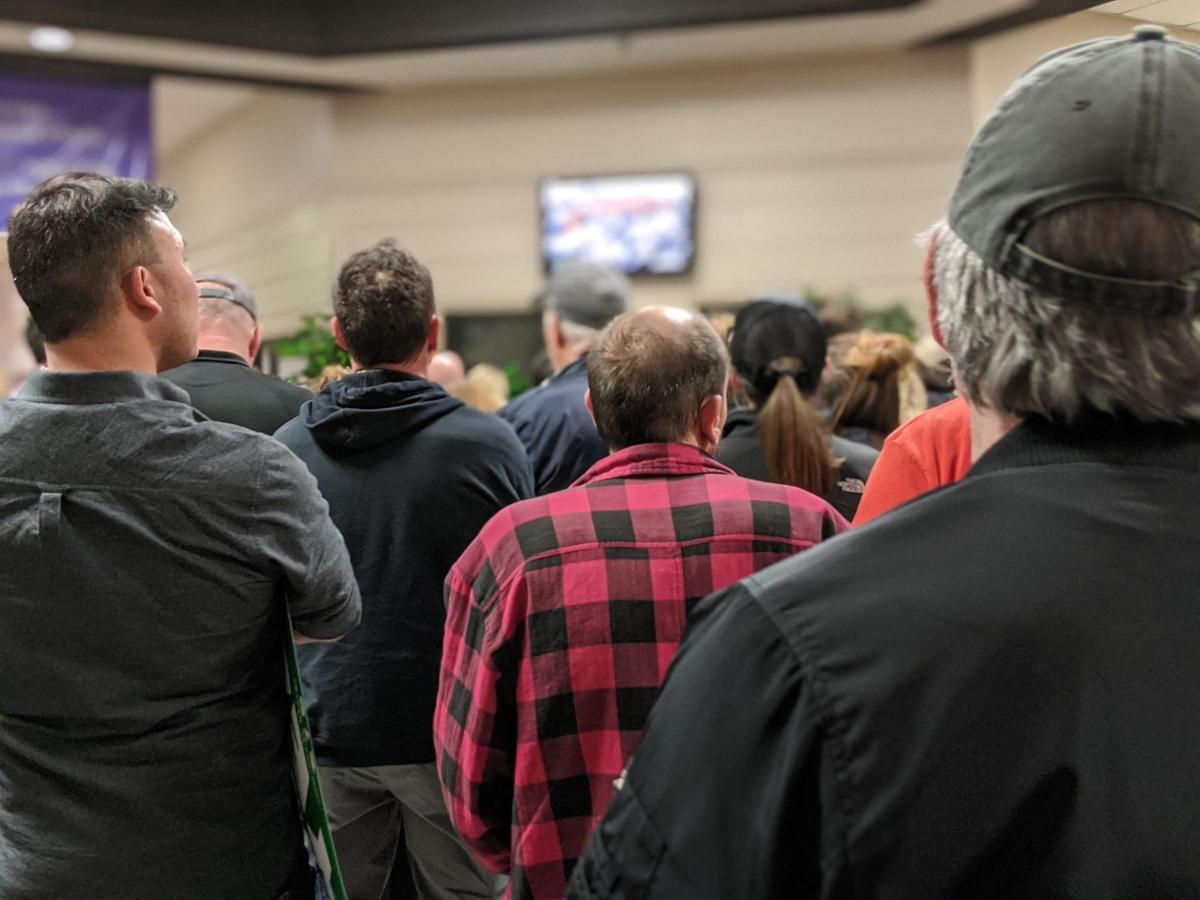 Residents watched speakers present both sides of the argument before the board ultimately voted not to allow the organization in the civic institutional zone.

Hundreds of people gathered inside and outside the Franklin City Hall Board Room for the Board of Zoning Appeals meeting, where the city would decide whether or not Our Thrift Store would be allowed to build a facility in a civil institutional zone.

Supporters and opposers, overflowing out the doors of the board room, gathered around the television in the lobby, where the meeting was streamed.

Supporters of Our Thrift Store’s appeal wore stickers and held signs that read, “I say yes.”

Residents watched speakers present both sides of the argument before the board ultimately voted not to allow the organization in the civic institutional zone.

After three weeks of anticipation, the Franklin Board of Zoning Appeals ruled not to allow Our Thrift Store to build a new facility on a property zoned for civic institutional use.

Thursday night, hundreds of community members flocked to Franklin City Hall to express either their support or opposition to the GEAR Foundation, the nonprofit that runs Our Thrift Store on Columbia Avenue, building a new facility on a parcel of Williamson County land on Granbury Street.

Back in September, Williamson County Mayor Rogers Anderson offered to lease the property to Dave Krikac, the owner and founder of the GEAR Foundation, for $1 a year, knowing that the organization’s current lease is set to expire soon. However, when the official decision to lease the land came before the county commission budget committee last week, the committee voted to defer the vote until the city made a decision on whether or not to allow Krikac to operate the organization in civic institutional zoning as opposed to a commercial zone, in which the nonprofit operates currently.

Those in support of the organization’s use of the new property wore green stickers that read “I say yes” and held matching signs. Because of the mass amount of people attending the zoning appeals meeting Thursday night — the crowd overflowed from the 170-person-capacity board room and filled the lobby just outside — Frank Jones, the chairman of the board of zoning appeals, decided to extend the normal time allotted for public hearing on each side of an issue from seven minutes to 15.

On both sides, the full 15 minutes were filled.

Before public comments began, though, the zoning administrator, Shanna McCoy, stated her stance, which the board would vote to support or overturn.

“I determined that the use of Our Thrift Store is a retail use,” McCoy said. “I arrived at this determination after reviewing and considering several definitions in the zoning ordinance, including the definitions of a retail use; charitable, fraternal or social organization; place of public assembly; and personal services.”

Running through all of these definitions, she determined the organization to be primarily a retail store, similar to Goodwill.

“Goodwill does a lot of great things. They’re a good, charitable organization, but the GEAR Foundation — their focus isn’t charity; their focus is education and training,” Burger said.

Some on this side of the argument claimed the retail component of the organization is merely to fund training and provide jobs for adults with disabilities, more than 80% of whom across the country do not have jobs according to the U.S. Department of Labor. Others claimed the zoning ordinance clearly does not allow for such an organization to operate within civic institutional zoning but pleaded with the board to allow for a variance, excusing this particular case.

“Based on what staff just told you, I think your decision is probably already made and probably pretty easy because what we’re asking for is not permitted,” said David Klatt, whose child works at Our Thrift Store. “The fact of the matter is we need to step up as a community at permit this organization to continue to exist and to flourish. … Maybe we’re asking for the moon, but that’s what we’re asking.”

Meanwhile, the other side was largely represented by neighbors of the Granbury Street property, who did not want Our Thrift Store that close to their houses. Stephanie Steele, a 62-year resident of Granbury Street, said she likes the empty, grassy lot as is. She said she takes her grandchildren to play back there.

“I work for Goodwill. We do the same thing you do,” she said. “We train our people in a retail store.”

Sean Aiello, district 11 county commissioner, also expressed there is no guarantee the county commission would lease the land to Krikac even if the board did allow Our Thrift Store into a civic institutional zone.

Ultimately, the board decided unanimously to uphold McCoy’s assessment, and almost immediately after the decision was made, Granbury Street resident Guil Ezell stood up to express his support for Krikac and his organization despite it not being allowed on that property.

One resident in the crowd said the community should start a GoFundMe page to help the organization purchase property.

District 11 county commissioner Brian Beathard said he has had several people contact him over the last few weeks with property recommendations and some land donation offers for the organization.

Krikac said, despite some disappointment, he’s okay with a “no” and is hopeful that a solution will turn up.

Guess the Thrift Store did not have enough developer blood to get its waiver. Guaranteed if they did, this would have been approved.