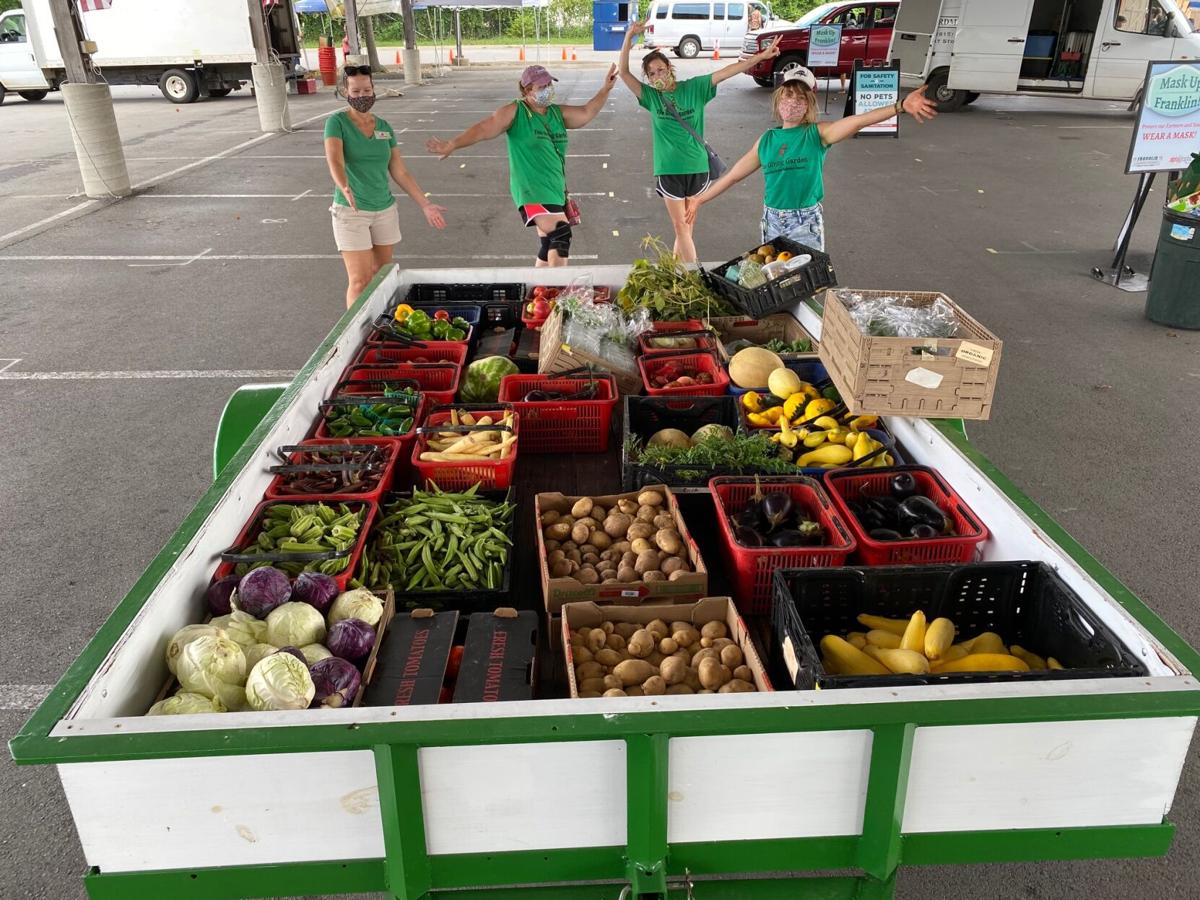 Giving Garden on the Go volunteers meet at The Factory on Aug. 15 to transport donated produce to communities.

Giving Garden on the Go volunteers meet at The Factory on Aug. 15 to transport donated produce to communities.

Under the shade of a tree at the entrance to Franklin Estates, one of Franklin’s mobile home communities, volunteers stood beside a flatbed trailer full of fresh vegetables on a recent Saturday.

As people came in and went out of the neighborhood, a bilingual volunteer explained the purpose of the truck, which had come from the Franklin Farmers Market to distribute donated surplus produce to those who may be in need.

Those serving were part of Franklin First United Methodist’s Giving Garden on the Go, a new expansion of its long-running garden program. Since its inception this summer, the group has given away over 9,000 pounds of food.

Though the church has partnered with the market for several years to receive surplus produce — often bringing a portion to food bank One Gen Away — Jody Todd, who is communications director at FUMC, said they wanted to find a way to also serve others in Franklin.

After One Gen Away moved across town from a previous location at The Factory at Franklin, Todd said she wondered about serving the neighborhoods they passed as they drove produce to the food bank.

“Really, the moment was birthed out of feeding the people in our neighborhood and getting to know them,” she said.

Todd, who lives a few minutes from Franklin Estates, said some may see the mission as serving the poor, but she heeds the call simply to serve her own neighbors.

“It brings you into a different position of ownership for it,” she said. “These are our people.”

Located on Franklin First United Methodist’s Mack Hatcher campus, the 5-acre garden has been in existence for over a decade and typically provides 35,000 pounds of food each summer for the community.

After the church purchased the land for a new campus in 2007, parishioner Michael Jones asked then Rev. Lynn Hill if Jones could start a pumpkin patch on a portion of the 107-acre property. Hill agreed, and the beginnings of the garden sprang to life.

“Michael had a plan for a pumpkin patch, and God had a vision for a garden that would feed a community,” said the Rev. Vona Wilson, the church’s senior associate pastor in charge of missions.

Wilson said food from the garden is given to community partners. But the garden doesn’t just fill a physical need.

“It’s something that connects us with our deep humanity,” she said.

Wilson said that for years the church has worked to form relationships within Franklin’s diverse communities.

“The relationships have just grown to be friendships,” she said.

A few of its 19 partners include GraceWorks Ministries, the DUI court, Nashville Food Project, WAVES, Second Harvest Food Bank and newer partnerships, such as Daughters of the King.

Another important connection is with the farmers market.

Todd said the generosity of the market through the years has enabled the church to continue and expand the garden’s mission.

“We’re all equal. This is just something we have the good fortune to do,” she said. “Literally, we are standing in the gap.”

Since the COVID-19 pandemic hit the nation in March, community leaders say they have seen a greater need for food, as well as hope.

“This year, it has just become apparent how hungry people are,” said Barbara Bowden, the garden’s distribution director.

Valencia Breckinridge, executive director of GraceWorks, said that the number of people seeking food from their mobile pantry has doubled since the start of the pandemic, with lengthy lines at their drive-through events.

Breckinridge said that demand for food was so high during April, May and June that the nonprofit spent the same amount purchasing food that it typically does in a year.

One Gen Away distributed 1 million pounds of food in 2019. By April of this year, it had surpassed the 1 million-pound mark and is on track to give away 3 million pounds in 2020.

“Everybody is calling, wanting to know if we have more food,” Bowden said of their partners. “I just see a great need.”

During summer weekdays, the sun beats down upon the masked volunteers who move seamlessly throughout the garden, pruning, weeding and harvesting squash, tomato and okra.

This year, the potato harvest has been a larger part of the garden’s bounty than usual. A man driving a tractor plowed up rows of potatoes, leaving volunteers carrying baskets to walk behind and remove the starchy gems from the exposed earth.

The decision to plant an abundance of potatoes was intentional, as the garden board became aware of what was to come with the pandemic.

“They don’t require as much upkeep, they can be stored and they are nutrient dense,” Wilson said.

The potatoes are one example of how the church’s gardening efforts have adapted since the pandemic hit.

Bowden said some of their regular volunteers are older adults who haven’t felt comfortable coming out to work around others, and the church has limited the large groups that used to come in the summer.

“We could not have survived this year if we had not had the master gardeners and our core group of volunteers,” Bowden said.

The garden is open to volunteers, as long as they can meet health and safety standards listed on the church’s website.

“People find it’s peaceful there — everybody is working for the community,” Wilson said. “We teach that the body of Christ is made up of all different gifts, and you go to the garden and actually live that teaching.”

To sign up to serve in the garden, visit franklinfirstumc.ccbchurch.com/gotoscheduling/40/public.