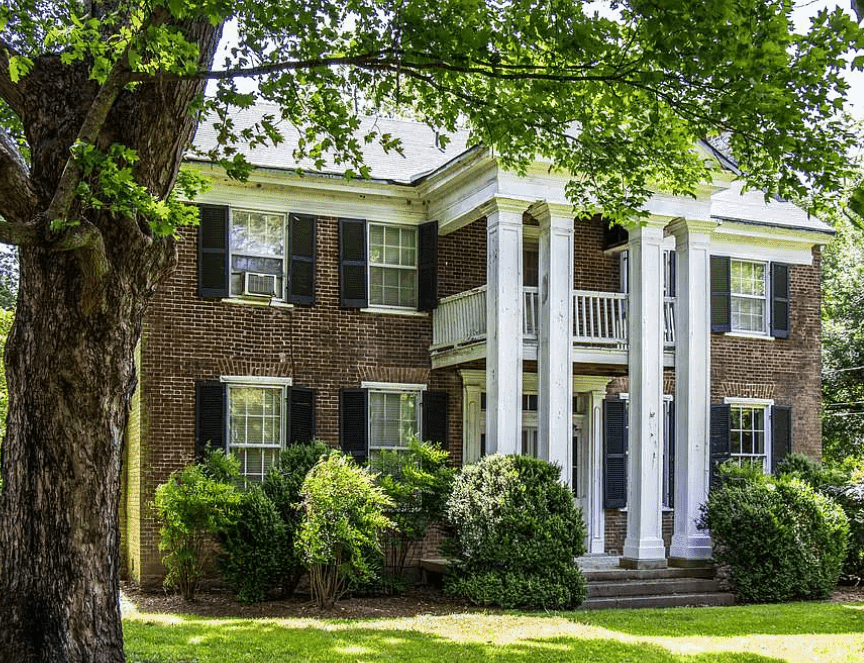 The Creekside home was built in Franklin in 1835, according to the Tennessee Historical Commission. 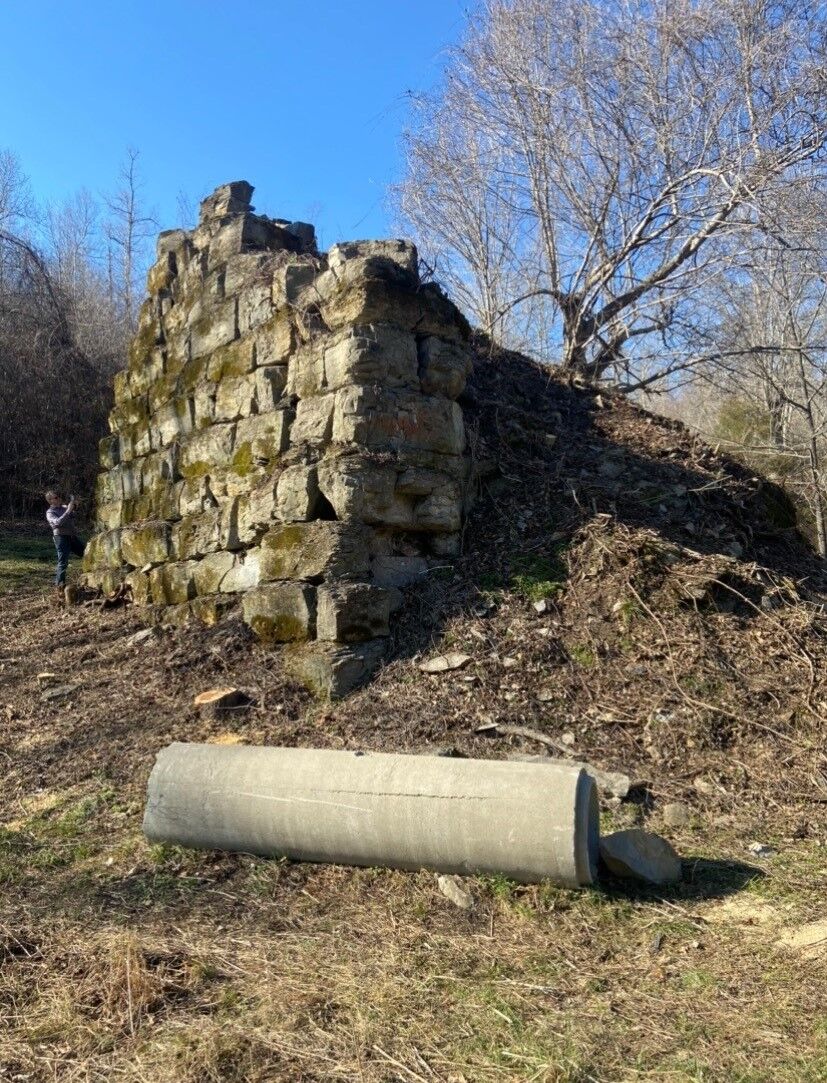 Located near Fairview in the northwest corner of Williamson County along the Caney Fork of the South Harpeth River are the remains of the limestone stack of the Williamson furnace. 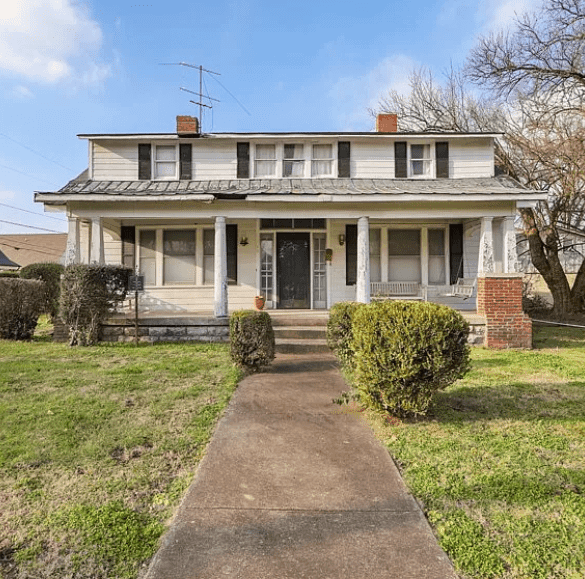 The Merrill-Williams house in Franklin was built in 1881. 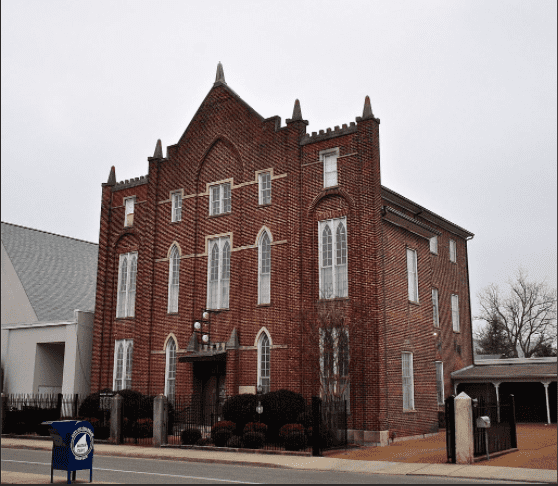 The Historic Franklin Masonic Hall is a historic Gothic revival building constructed in 1823 and still being used regularly by the Hiram Masonic Lodge No. 7.

The Creekside home was built in Franklin in 1835, according to the Tennessee Historical Commission.

Located near Fairview in the northwest corner of Williamson County along the Caney Fork of the South Harpeth River are the remains of the limestone stack of the Williamson furnace.

The Merrill-Williams house in Franklin was built in 1881.

The Historic Franklin Masonic Hall is a historic Gothic revival building constructed in 1823 and still being used regularly by the Hiram Masonic Lodge No. 7.

The Heritage Foundation of Williamson County announced this week the properties it considers the most at risk in the county and efforts to help preserve them.

The new preservation advocacy program, Sites to Save, is designed as a tool to help the community partner with the Heritage Foundation in its efforts to raise awareness of Williamson County’s significant at-risk historic, cultural, geographical and archaeological resources. These resources may include buildings, structures, cemeteries, historic districts, archaeological sites, natural and cultural landscapes.

“As we continue fulfilling our mission of saving and sharing historically rich places and stories throughout our entire county, the Sites to Save program is a natural next step,” said Heritage Foundation President and CEO Bari Beasley. “Historic preservation has long been important in Williamson County and its cities, and our organization sees the endangered list as a way to generate creative approaches to preservation and connect property owners with resources to ensure that historic places are saved and rehabilitated for future generations.”

Six properties, dubbed the “Six at Risk,” have been identified for 2021.

Properties will remain on the list each year until such time as the threat is lessened or the property is preserved. The primary benefit of the endangered list is public awareness, advocacy and action.

The properties on the 2021 “Six at Risk” list are the Historic Franklin Masonic Hall at 115 2nd Ave. S. in downtown Franklin, the Merrill-Williams House at 264 Natchez St. in downtown Franklin, the Williamson iron furnace on Caney Fork Road in Fairview, the Civil War earthworks off Spanntown Road in Triune, the farmstead tracts in Nolensville and the Creekside property at 370 Franklin Rd. in Franklin.

The Historic Franklin Masonic Hall is a historic Gothic revival building constructed in 1823 and still being used regularly by the Hiram Masonic Lodge No. 7. Recognized by the U.S. Department of the Interior as a National Historic Landmark, it is the oldest three-story building in Franklin, and is nationally significant as the site of negotiations in 1830 between President Andrew Jackson’s administration and nearly two dozen of the Chickasaw Native American leaders.

The Merrill-Williams house was built in 1881 by Moses Merrill, a formerly enslaved man owned by slave trader Charles Merrill of Franklin and Nashville. As Moses Merrill grew older and less able to maintain the residence, he sold it in 1891 to Tom Williams, the son of well-known African American businessman and preacher A.N.C. Williams. The property was listed for sale last fall, and the African American Heritage Society of Williamson County has a one-year option to purchase and save the home from potential gentrification.

Located near Fairview in the northwest corner of Williamson County along the Caney Fork of the South Harpeth River are the remains of the limestone stack of the Williamson furnace. Built in 1832 by Moses Speer, it is believed that the iron used to make the columns of the historic Williamson County courthouse on the public square was cast from pig iron manufactured at this furnace. It is the only known iron furnace that operated in Williamson County.

Spread across 500 acres and multiple private tracts in Triune is a Civil War fortification one preservation expert called “one of the most intact and unaltered set of Civil War earthworks in the U.S.” The earthworks provided protection as well as a crucial signaling station for U.S. soldiers to communicate between Franklin and Murfreesboro.

Road realignments, traffic signals and increased commercial development interest have placed pressure on large farm parcels that contain historic homes in Nolensville. Tweaks to the town’s downtown zoning have paved the way for larger-scale commercial development than was previously allowed in the area. Recently big-box grocery chains have floated proposals for developing tracts along Nolensville Pike at Clovercroft and Rocky Fork roads, putting the future of the homes in question.

The Creekside home was built in 1835, according to the Tennessee Historical Commission. A developer is proposing construction of a residential neighborhood at this gateway to downtown Franklin, on both sides of Franklin Road, with 33 single-family homes and 32 multiplex buildings, each of which would contain four apartments. Creekside was the home of descendants of John B. McEwen, who was mayor of Franklin during the Civil War.

For each of the sites on the list, staff at the Heritage Foundation of Williamson County plan to attend relevant public meetings that involve the sites on the list, consult with willing property owners and municipalities about the history of the property and offer insight on preservation and restoration, and connect willing property owners with construction and preservation experts related to the needs of the site.

In addition, the Historic Franklin Masonic Hall and Merrill-Williams House will receive in-kind resources in 2021, valued between $25,000 and $50,000, through the Heritage Foundation and its divisions. They will receive free professional services through the foundation’s preservationists, including resources such as conditions assessments, preservation plans or historic structures reports to support the property owners’ understanding of the sites’ history, preservation needs and recommendations for future preservation, restoration and/or rehabilitation. In addition, the sites will have an opportunity to host a fundraising event or concert as part of a new “Playing for Preservation” series at The Franklin Theatre.

Special events encourage community engagement and can be a powerful tool to rally support and needed funding to support the preservation project.

“We understand that our quality of life is special and rare, and we know that protecting it doesn’t happen by accident,” Heritage Foundation Director of Advocacy and Government Relations Jill Burgin said. “Preservation has to be intentional, especially in an area that has seen the growth we’ve seen in Williamson County. While we respect the rights of property owners, we also want the public to know that being listed on the National Register of Historic Places isn’t a force field that protects a place in perpetuity. Preserving old structures takes knowledge and money, and we hope to help shape public policy and inform residents about these resources and share the value of these properties to the cultural fabric of our community.”

In addition to the “Six at Risk,” the Heritage Foundation has also compiled an honorable mention list of “Sites to Watch,” which are locations that are not in imminent danger of demolition but are on the radar to be monitored because of uncertain funding resources or threat of development.

• The Daniel McMahon House on the Franklin First United Methodist Church property near Franklin Road and Mack Hatcher. This home started around 1812 as a sprawling farm owned by one of the county's earliest settlers, Revolutionary War veteran Daniel McMahon.

• The Gaylor house at 253 Natchez St. was owned by Ruth Gaylor from 1902-1982 and is has been owned since the 1900s by the Shorter Chapel AME Church next door. Gaylor’s house was the only Franklin listing in the historic “Negro Travelers’ Green Book” from 1956-1961.

• The McCord Patton family cemetery in Arrington holds the final resting places of some the county’s earliest settlers and is threatened by development of a subdivision off Cox Road.

The Heritage Foundation hopes the Sites to Save list will help make locals aware of the historic sites around them, as well as educate newcomers to the area. To learn more about the sites and how to get involved, visit WilliamsonHeritage.org/SitesToSave.

To donate to the Foundation’s preservation efforts, including supporting the Sites to Save program, visit WilliamsonHeritage.org/Donate.