Magnolia Hall has been owned by Ann Inman for decades.

The property's pond backs up to New Highway 96 West. 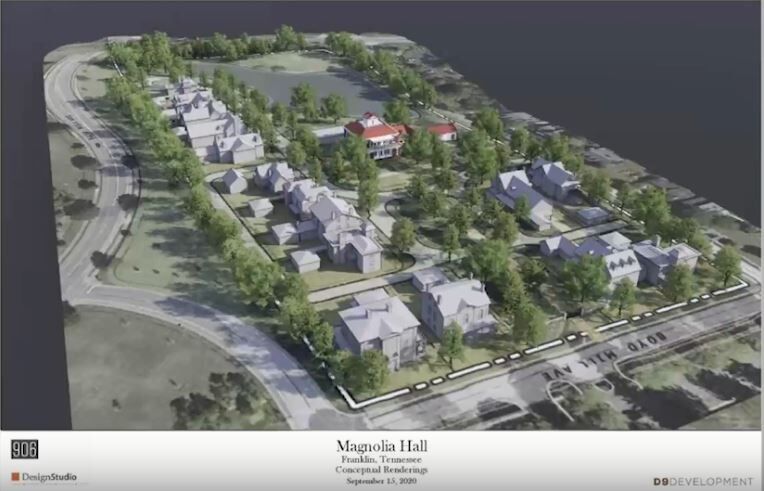 A preliminary rendering of the property shows how homes may be aligned.

Magnolia Hall has been owned by Ann Inman for decades.

The property's pond backs up to New Highway 96 West.

A Franklin developer known for creating high-end communities in downtown Franklin has plans to create a subdivision at Magnolia Hall.

At an online neighborhood meeting held Wednesday, Oct. 14, the Franklin Municipal Planning Commission heard how the developer plans to conserve the historic home and build 15 additional homes on the 12-acre plot of land.

The historic property is located at 600 Boyd Mill Avenue, on a corner opposite Jim Warren Park and bordered to the east by Glass Lane.

The 7,000-square-foot Italianate Greek revival home was built in 1840, featuring five bedrooms, four bathrooms and a large pond and springhouse on the north side.

The home and property were purchased in 1976 by Gordon and Ann Inman. The couple divorced in 1988, and Ann Inman retained Magnolia Hall. It has been on the market several times before Inman chose to work with Bernie Butler, the founder of D9 Development, to develop the property.

Jason Goddard, a landscape architect with Design Studio, represented Butler in requesting a change to Envision Franklin. The city’s planning document already allows for five homes around the perimeter of the property with preservation of the home, but Butler is asking for 15 single-family homes to be allowed with integration into the landscape and background.

Butler said he plans to restore the springhouse and create a dock on the pond so residents of the neighborhood might be able to use it for kayaking.

“We want the lake to be beautiful and landscaped around it and be an amenity for the neighborhood,” he said.

Homes would be 3,500- to 4,500-square-foot “period-correct” 1840s style homes, Butler said, likely ranging in price from $1.6 million to $2.5 million. The new buildings would be scaled so Magnolia Hall will be the centerpiece of the community.

Design documents show the entrance into the community off Glass Lane, with a village green space and an open space following the historic driveway that goes out to Boyd Mill Avenue.

“It seems to me that is not where the entrance needs to be,” said John Schroer, Franklin’s former mayor and a nearby resident on Boyd Mill Avenue.

He pointed out the lack of a traffic light system to Highway 96 from Glass Lane, noting that an entrance out of Boyd Mill might be more appropriate. Schroer clarified he wasn’t entirely opposed to the project.

“If the objective is to get us all on the same page, I’ll just let you know, I will never be on a page that has the entrance to this 15-unit subdivision directly across the end of my driveway,” Glass Lane resident Judge Joseph “Woody” Woodruff said. “That’s a nonstarter for me.”

Butler said the design visuals were a schematic based on what had been required by the city, and the entrance location is yet to be set in stone. The amendment, he said, will give them permission to work further with the city on the site plan.

Butler acknowledged the difficulty of developing such a historic property in downtown Franklin and said he is committed to working with the city staff and neighbors to ensure the development is done to satisfy all parties involved.

“If I’ve got any history in downtown Franklin, it’s that we unanimously come up with something that we all love,” he said.

The Franklin Municipal Planning Commission will hold a hearing for the amendment at 7 p.m. on Dec. 10.

You kind of wonder why we spend all this time and money on things like Envision when the BOMA will just grant a waiver.

My thoughts exactly. Total waste of money. The planning committee is only interested in how many homes they can cram into our historic areas.