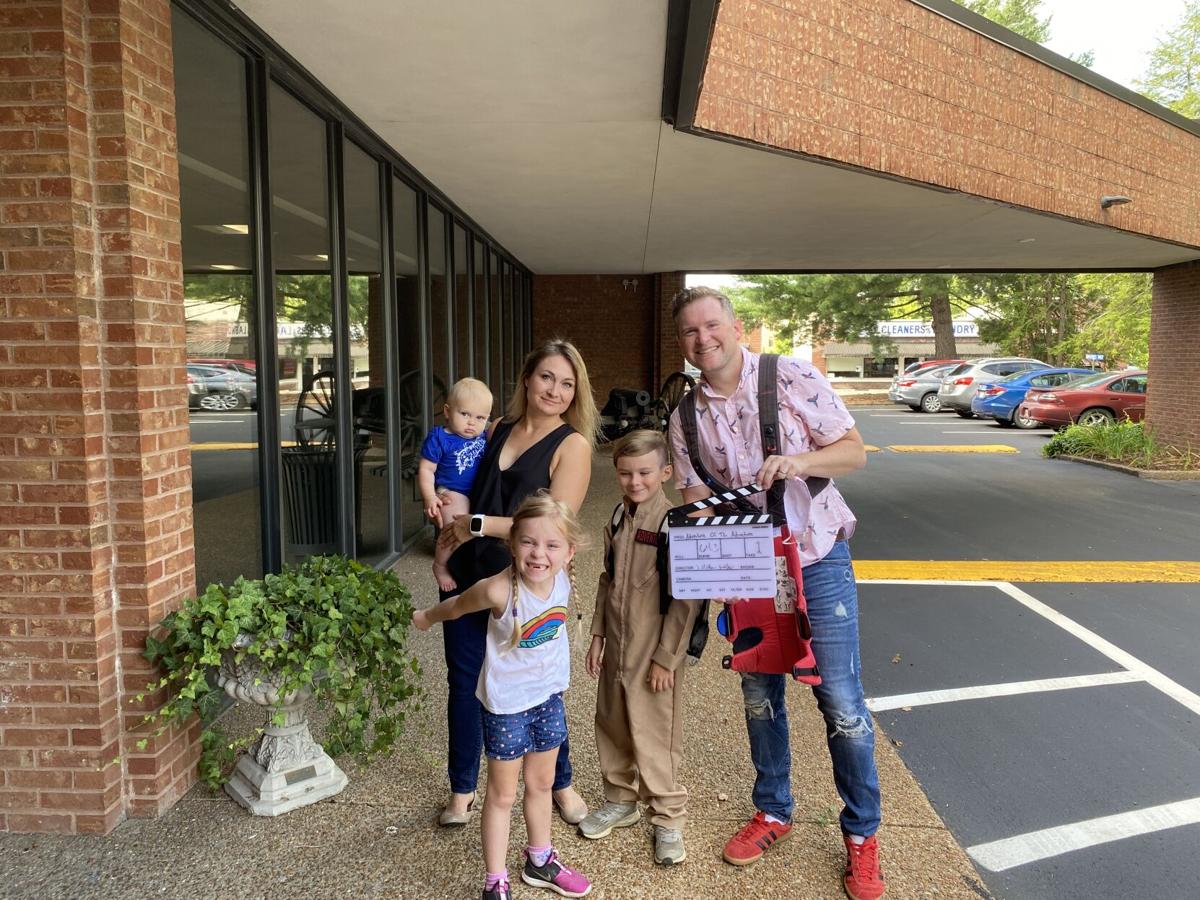 In lieu of a summer vacation, the Welker family created a 1980s-style adventure movie during quarantine surrounding the Battle of Franklin and including some of their favorite spots around town. Pictured in the back are Zena Welker holding baby Turner, oldest child Camden and J. Matthew Welker with middle child Irie standing in front. 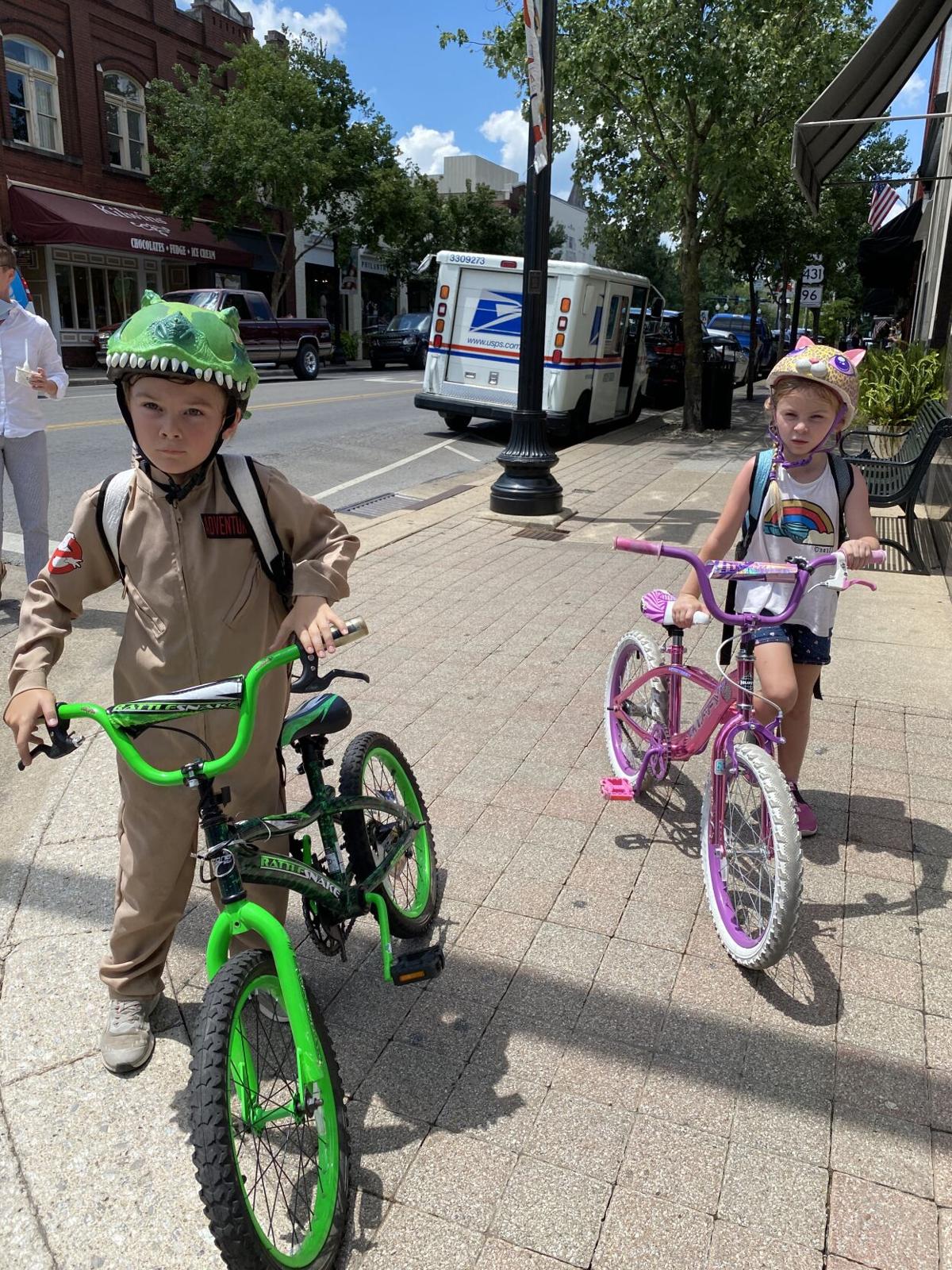 Camden, left, and Irie Welker star in “The Adventures of the Adventures,” a family film about a hunt for treasure dating back to the Civil War, which will premiere at the AMC Dine-In theater in Franklin on Thursday.

In lieu of a summer vacation, the Welker family created a 1980s-style adventure movie during quarantine surrounding the Battle of Franklin and including some of their favorite spots around town. Pictured in the back are Zena Welker holding baby Turner, oldest child Camden and J. Matthew Welker with middle child Irie standing in front.

Camden, left, and Irie Welker star in “The Adventures of the Adventures,” a family film about a hunt for treasure dating back to the Civil War, which will premiere at the AMC Dine-In theater in Franklin on Thursday.

In the midst of a global pandemic, happy days may not come so naturally, but the Welker family was determined to make the most of the positives in their lives this year and to make happy days for their kids to remember when they look back on 2020.

J. Matthew Welker had a month left of paternity leave, which was originally going to involve a family vacation, when the coronavirus hit. With vacation canceled and time to kill, his wife, Zena, suggested he start a project — a short family film, though “short” may not be the right descriptor.

“He went to school for film, so I said, ‘Why don’t you do a 15- to 20-minute short with the kids, and maybe you can involve some of the other kids in the neighborhood since they’re all pent up in their houses as well,’” Zena Welker said. “Then he just started writing a script and just kept writing a script and then just kept writing a script, and it ended up being about an hour-and-a-half-long movie that involved all the families that we were kind of quarantining with here in our little neighborhood in Franklin.”

The movie, “The Adventures of the Adventures,” pays tribute to epic movies of the 1980s, such as “The Goonies,” as the Adventures, a Los Angeles family settling in Franklin (much like the Welkers), go on an adventure of their own surrounding a historical event that happened in their own backyard over 130 years ago: the Battle of Franklin.

The Welkers moved to Franklin from Los Angeles, California, about six years ago, and they live in a neighborhood surrounded by Civil War era stone walls. In the family’s movie, part of a wall falls, and the Adventures kids find a wartime note with a clue, leading them all over the city on a treasure hunt.

“There are so many beautiful locations (here), and we thought, if we can use those and stuff, it would look fantastic, and we can kind of run around town and ask people at, like, Landmark Booksellers or the Williamson County Museum and the Visitors Center,” J. Matthew said.

He said that his kids — Camden, Irie and Turner — have always “eaten up” activities involving the history of Franklin, such as tours of Carnton or the Lotz House, and it made sense to include those historical elements in the movie’s adventure. He shared that, while the Civil War may be a sensitive subject, “it’s really important to still know about (it) today,” and the movie also acted as a family learning opportunity.

However, the kids didn’t just learn about the Civil War in creating this project. J. Matthew got to teach them a little bit about filmmaking, and they certainly had fun in the process. The kids shared that they learned about continuity as they shot all the scenes at a given location at one time rather than in chronological order. They learned how much work goes into their favorite movies as they watched their dad edit for hours on end. They even got to play cinematographer and hold the iPhone 11 on which the movie was shot when their dad was in a scene.

“Are all the shots of daddy from a really low angle?” J. Matthew asked his kids — the answer was yes.

“I personally was struggling a lot, especially with the voice thing,” Camden said of the process where vocals had to be recorded and redubbed over video when the original audio was unusable. “It took almost 80 times for me to get one sentence right.”

Even though the family’s original vacation plans to visit New York City were missed, Zena said she wanted to show her kids that taking a trip isn’t the only way to find adventure.

Each family member had their own special memories from the filming process, but it seems the consensus was that the moment when the kids’ grandmother chased their uncle, who played the antagonist, with a frying pan was the most fun — at least for the kids.

The Welkers shared that it was great to see their family and community come together in this project, and as dreadful as the pandemic has been, this wouldn’t have happened without it.

“Had there not been a pandemic, had there not been schools shutting down and my work sending us all home until July next year, had I not had this job where they gave me the time off, had our trip not been canceled in New York this summer, none of this would’ve happened,” J. Matthew said.

“The Adventures of the Adventures” will premiere at the AMC Dine-In Thoroughbred 20 theater in Franklin on Thursday, Nov. 5, at 6 p.m. at 40% capacity. Tickets are free and can be reserved on Eventbrite. To watch the movie trailer, visit The Dirt Farm Productions YouTube channel.