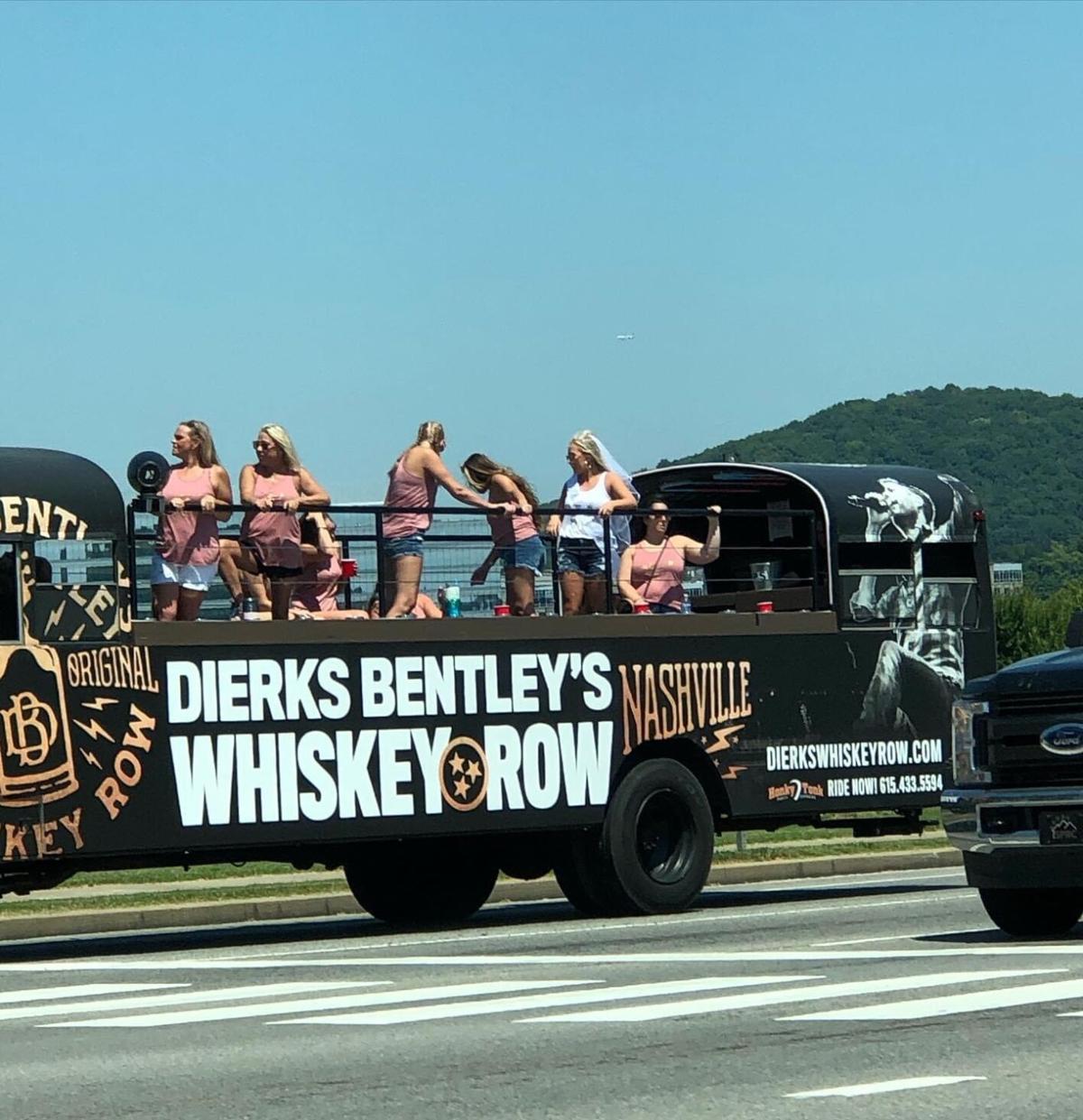 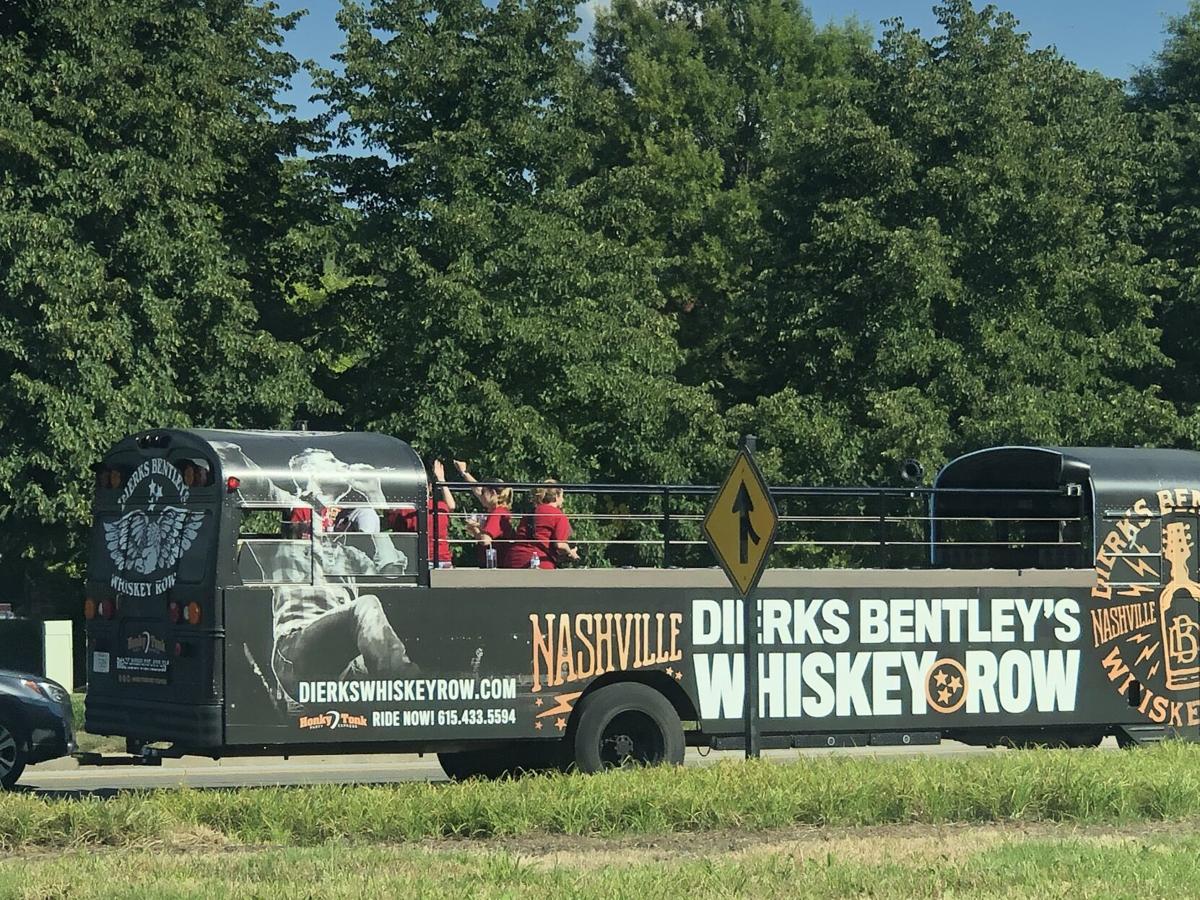 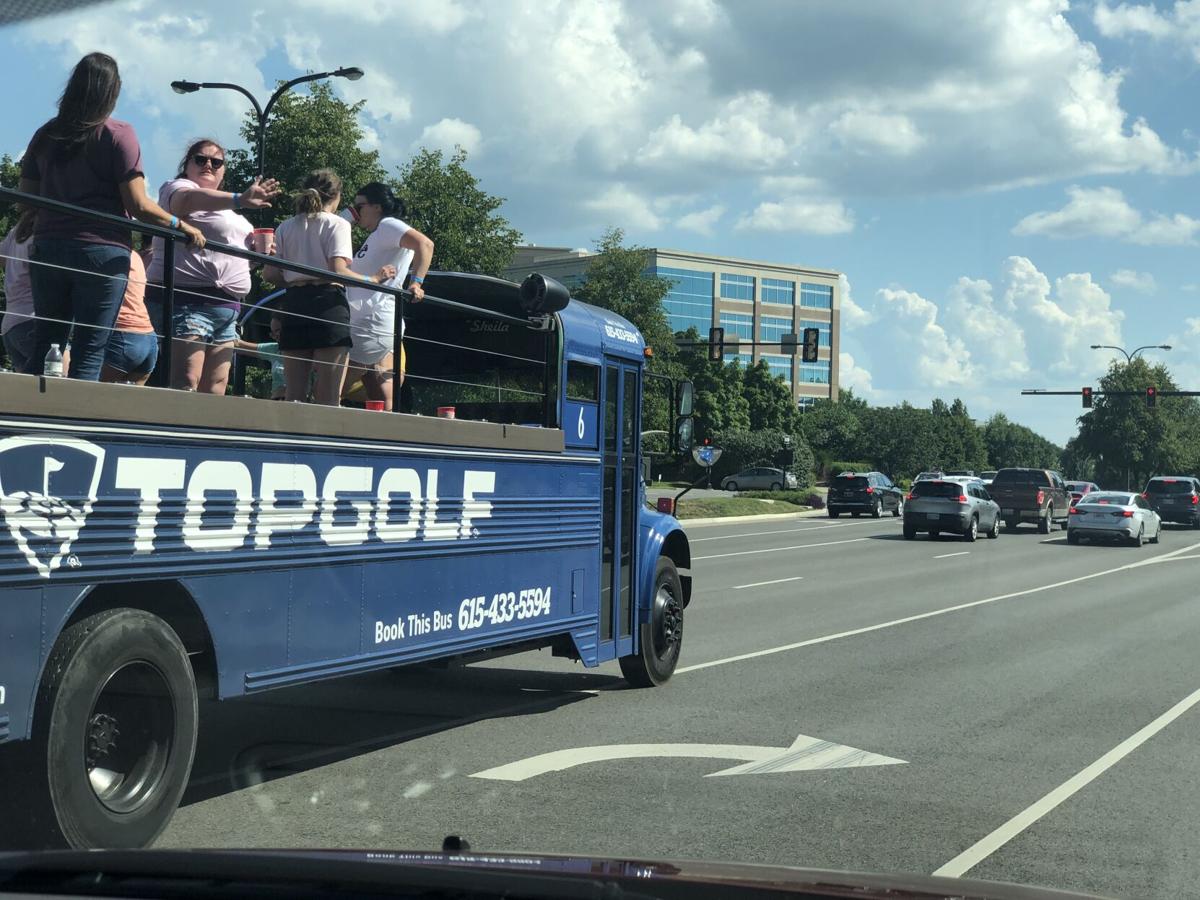 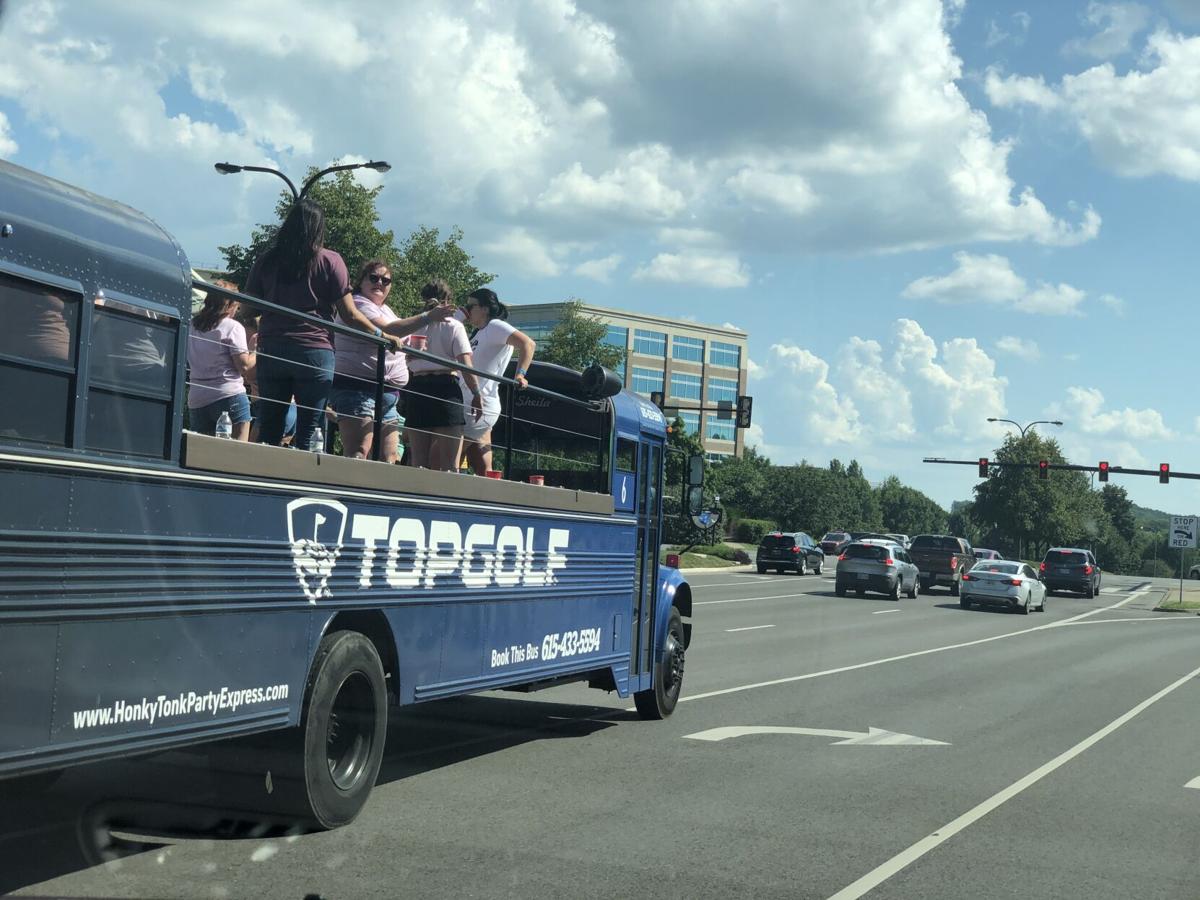 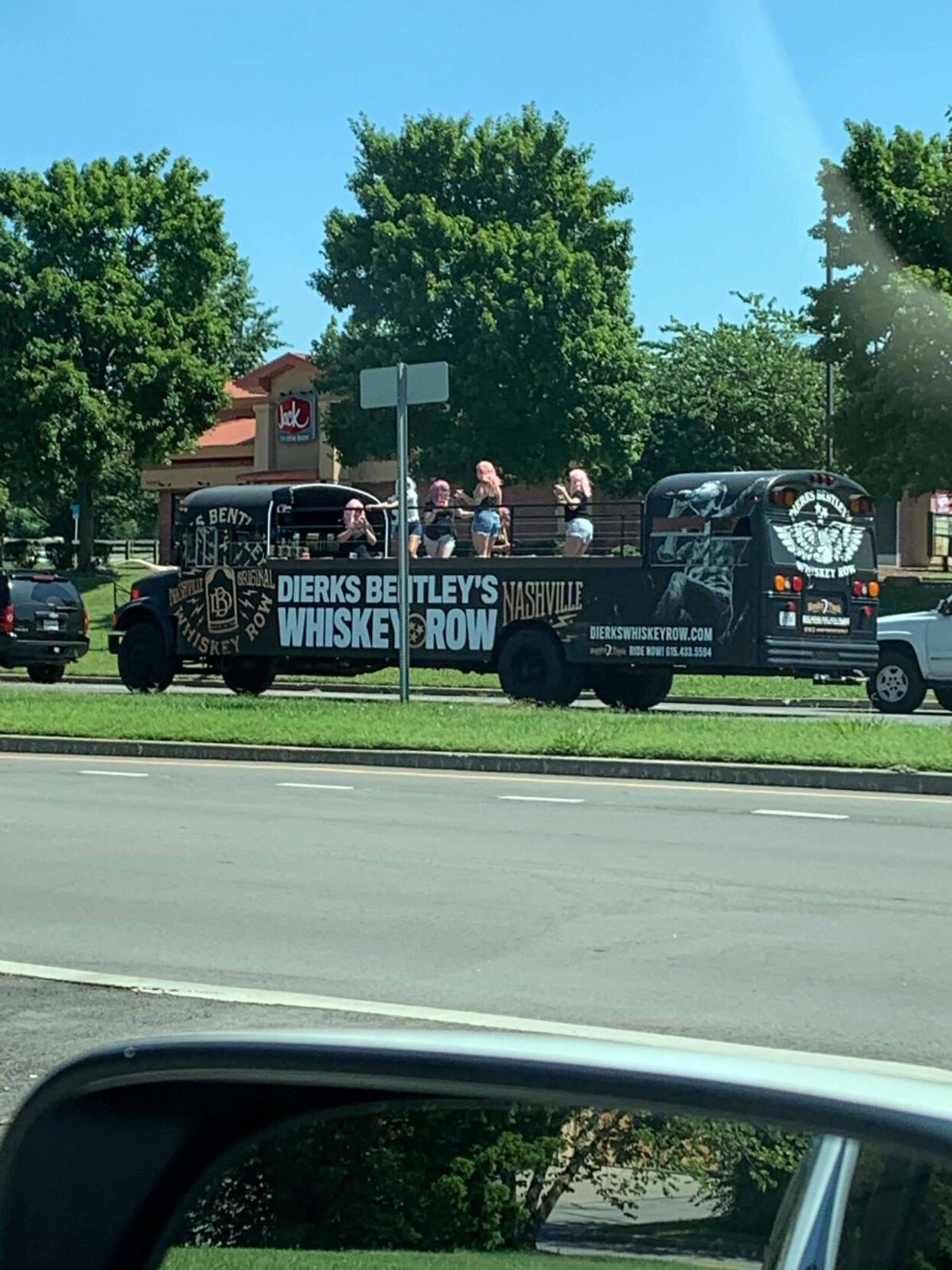 When Nashville Mayor John Cooper and the Metro Public Health Department banned party buses in the city, the businesses who sponsored these “transportainment” vehicles thought they found a way to continue: make their way to Williamson County.

The party buses were first spotted Friday afternoon at the MAPCO convenience center on Moores Lane in Cool Springs. By Saturday, they were lined up at the Tin Roof bar on Carothers Parkway.

The buses loaded and unloaded behind the bar then traveled south on Carothers, turning onto McEwen Drive, right onto Mallory Lane and then a right onto Moores Lane before making the turn back on to Carothers. Honky Tonk Party Express, TopGolf and Dierks Bentley’s Whiskey Row were three of the buses seen by Herald staff.

As photos began circulating on social media, the Herald posed a question on Facebook asking readers their thoughts on the party buses. The response was an overwhelming “No,” party buses are not welcome in Williamson County.

“Drove behind the Top Golf bus in Cool Springs,” Marion Wiggins said on Facebook. “Music was so loud — I couldn’t hear my own radio with the windows up. The party was clearly not concerned for their personal safety — didn’t see any masks — no way for personal distancing.

“Hope this doesn’t become a regular thing in our beautiful town of Franklin.”

Monique Bruno asked neighbors on Nextdoor what they thought and said, “My son looks up and some girl is shaking her ___ wearing a bikini.”

Christopher Tasik, a Brentwood resident, also posted on Nextdoor that he called Franklin police after seeing the TopGolf bus and then called the business.

“After a lengthy lecture about everything they are doing to keep their employees safe I was unable to speak to somebody because they don’t have anyone to answer their phones,” Tasik said. “Hypocrisy at its worst. ‘Our’ people need to be safe but we’re okay putting others in danger.”

After Franklin police were called by private citizens, they responded by shutting the buses down.

“They were operating in the Cool Springs area yesterday [Saturday],” Ryan Schuman, a spokesperson for the Franklin Police Department, said. “One of the drivers was issued a citation for noise ordinance, and everyone was made aware of the city’s open container law. Officers spoke to the manager of the operation, and the buses are no longer operating in Franklin.”

The Brentwood Police Department also shared a statement on Facebook.

“The city of Brentwood is aware of open-air party buses that normally operate in Nashville showing up in the Cool Springs area Saturday afternoon,” the statement read. “The Brentwood Police Department will enforce all applicable state law and local ordinance requirements that apply to these operations, including noise regulations as they relate to amplified sound from these vehicles. City staff will continue to assess our local codes as to how they may apply to these types of businesses and respond accordingly.

“No citations were issued by BPD on Saturday, Aug. 8 for party bus violations.”

The mayors of Brentwood and Franklin also voiced displeasure.

“Tin Roof has not been good players through this whole thing [the COVID-19 pandemic], however, they are in the Franklin jurisdiction,” Brentwood Mayor Rhea Little said.

“Obviously, party buses are not Franklin,” Franklin Mayor Ken Moore added. “Due to COVID-19, this situation has been put before us. I am against these buses.

“If this needs to be explored as a board, and I expect these conversations to happen early in the week, we will handle it moving forward. We have had some bad actors in our community, though. We know who they are.”

County Mayor Rogers Anderson extended the mask mandate in the county until Saturday, Aug. 29. It is a class A misdemeanor if residents are caught not wearing a mask. Police have been educating the community on the importance of wearing a mask and have not been issuing citations.

People on the party buses were not cited, as they were drinking beverages and this is considered an exception to the mask mandate.

“These people don’t care about other people,” Moore said. “It’s why cases of COVID-19 continue to increase. We have been contacting businesses who violate and talking to them. Moving forward, it may be time for more than talking.”