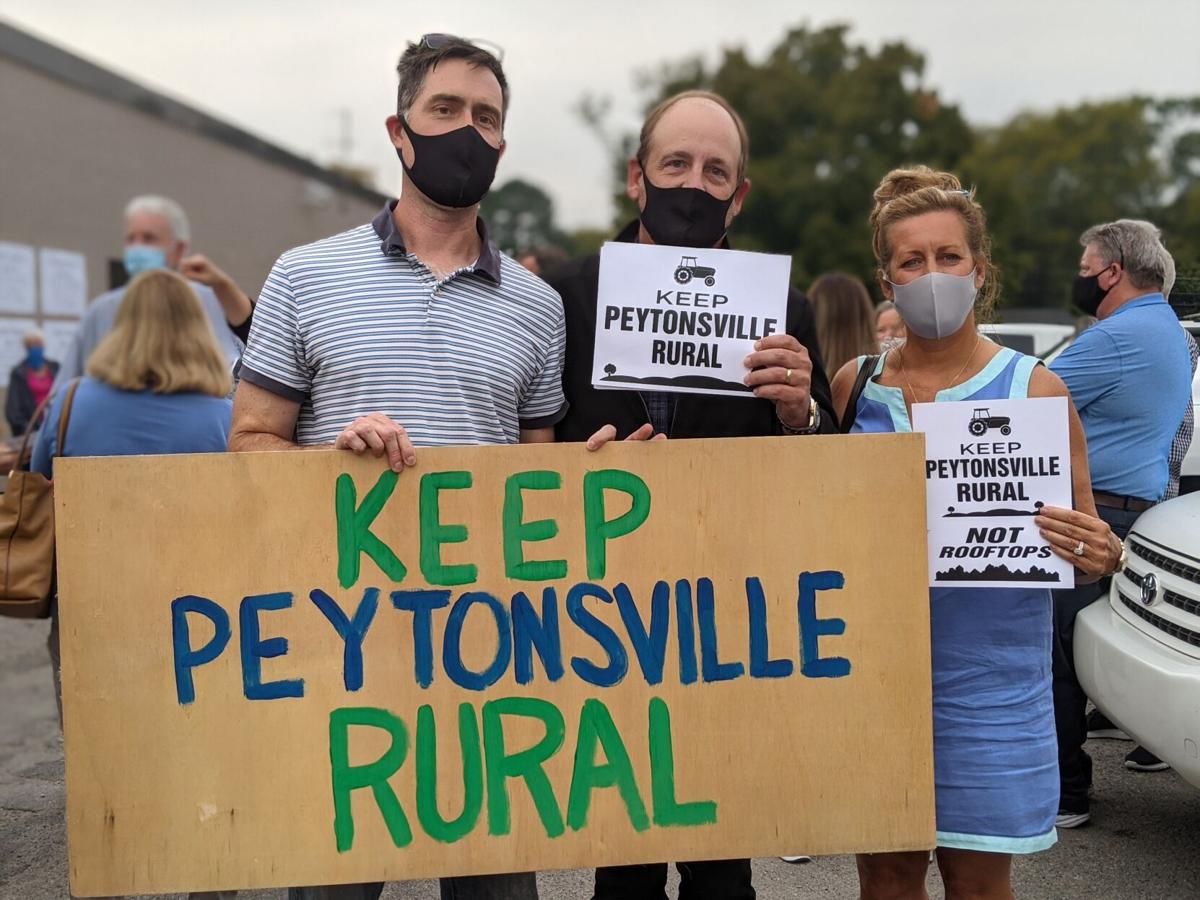 Peytonsville residents gathered outside the Williamson County Administrative Complex to voice their objections to the development planned for the Duquette property on Long Lane and Gosey Hill Road. 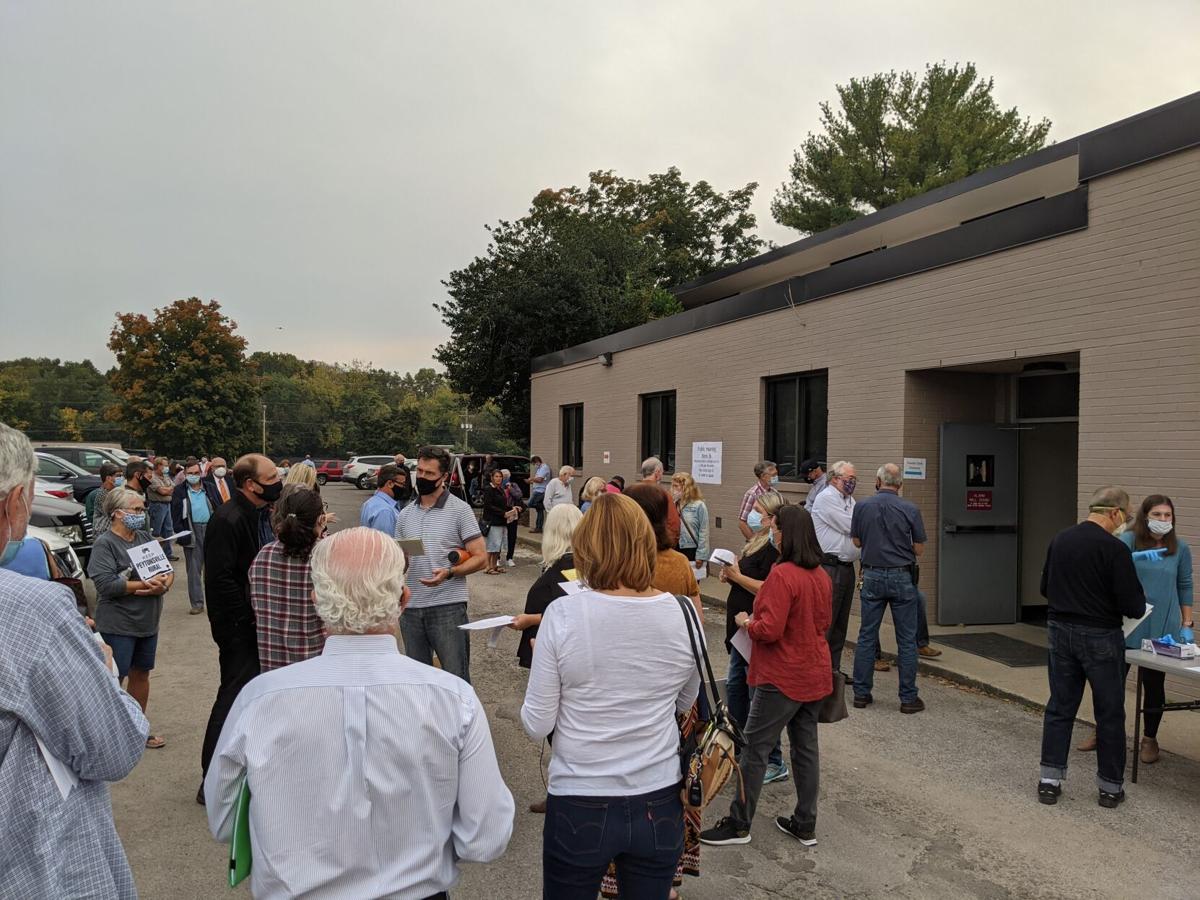 County residents sign up to speak during the Williamson County Planning Commission meeting. 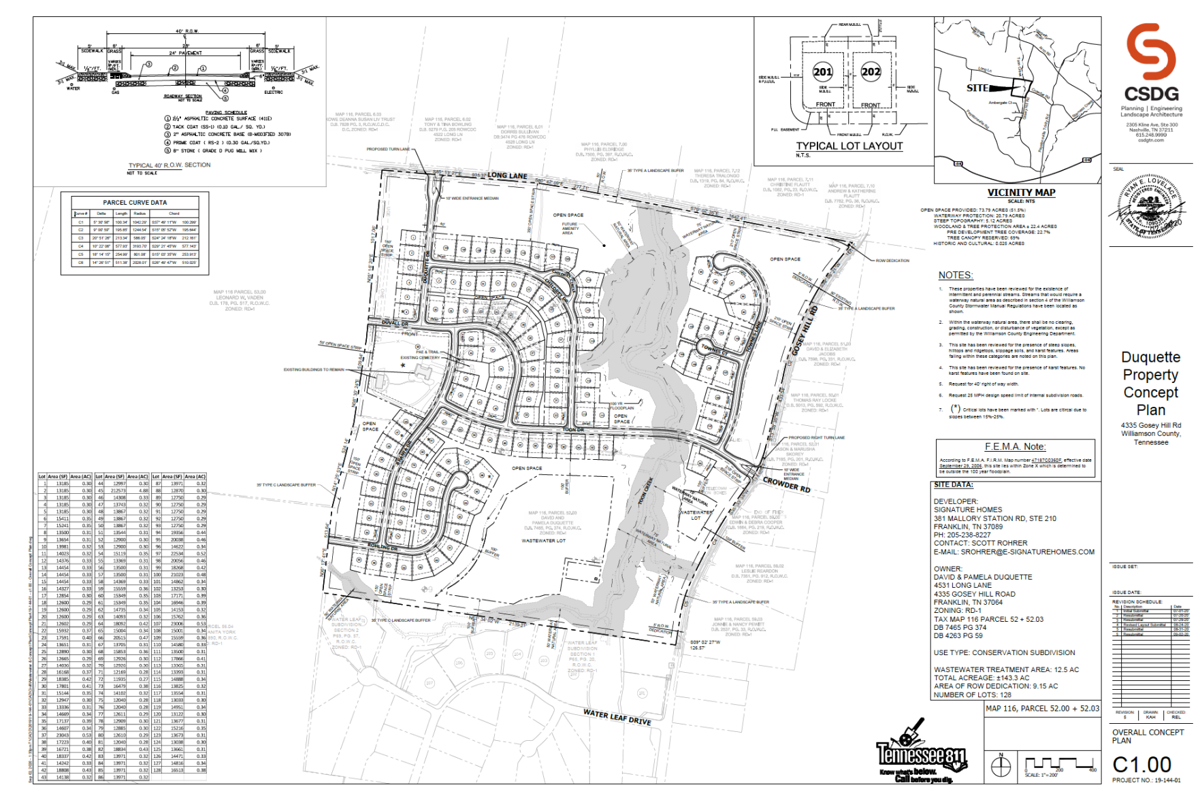 Pictured is the site plan for the Duquette property development. The planning commission passed the site plan 8-2 with amendments adding left-hand turn lanes into the subdivision and the movement of the Long Lane entrance as far east as possible for safety reasons.

Not much can draw a crowd these days, but dozens of county residents gathered outside the Williamson County Administrative Complex Thursday evening before a planning commission meeting to share their opinions on zoning and development.

Many in the crowd held signs that read, “Keep Peytonsville Rural,” in protest of a development plan for the Duquette property on Long Lane and Gosey Hill Road in Peytonsville. The development would bring 128 lots to the roughly 143-acre property — a density of about 0.9 units per acre — around Toon Creek with about 51% of the site preserved as open space and about 70% of the existing tree canopy retained.

Many residents expressed safety as well as aesthetic concerns with the development. Richard Jefferson shared that he’s concerned about the safety hazard of adding more traffic on Arno Road, just up Gosey Hill Road from the proposed development. He said there’s no shoulder on the road, and this sentiment was echoed by several residents who showed up to speak on the issue.

“No traffic study done while we are still in the midst of a pandemic is accurate. I cannot emphasize that enough,” one resident said during the public comment portion of the meeting.

Another resident said Long Lane was a “narrow, treacherous” road decades ago and that it still is, just made of asphalt rather than gravel. Andy Gilbert similarly mentioned the dangerous nature of the road itself, saying a large number of crashes have occurred on Arno Road over the last few years, even one including his wife and son.

During the meeting, planning commissioner Robin Baldree said traffic is a concern for her as well, recommending a left-hand turn lane into the subdivision be added to the plan in addition to its already proposed right-hand turn lane.

“I don’t know if you’ve been around elementary schools when they go to school, especially when they let out. There are a lot of cars,” she said, referring to Creekside Elementary School just up the road.

Planning commissioner and county commissioner Beth Lothers expressed her support of requiring left-hand turn lanes to the site plan, which was eventually passed by the commission.

Some residents were upset that Williamson County passed a revised comprehensive land use plan in March, which outlines a plan to rezone the area including the Duquette property from a one-unit-per-acre residential zone to a one-unit-per-5-acres residential zone, but this development would not be compliant with those guidelines. However, while the plan has been adopted, the zoning has not officially changed. The planning commission held a public hearing concerning the adoption of the land use plan’s new zoning regulations during the meeting, which will be continued at the next meeting.

“We have the plan, but the developers … have been scooping in right underneath and sweeping up this land and putting in these developments before we have a chance to really do all the (regulations) around the plan,” Gilbert said.

Mike Grant, another Peytonsville resident, said he doesn’t think the commission moved fast enough to implement the land use plan and its new zoning guidelines.

Lothers addressed this sentiment, saying the developers applied before the zoning changed from one unit per acre to one unit per 5 and that the commission is following the law.

“For anyone who would suggest that we are looking the other way or allowing things to be rushed through, that’s inaccurate, and many of us spent two years — close to — away from family and other time working on the (comprehensive land use plan), advocating for that,” she said. “Do we wish this was under the one-to-5? Yes. In all fairness, if it originated prior to March, I am obligated in fairness in obeying the law that I honor the fact that this applicant had submitted.”

Under the conditions of adding left-hand turn lanes into the subdivision and placing the Long Lane entrance as far east as possible, the site plan for the development passed 8-2 with commissioners Don Crohan and Jessica Lucyshyn voting against.

While a mixed crowd came to the public hearing of the adoption of the land use plan’s zoning changes, some in favor of certain one-unit-per-acre zones being changed to one-to-5 and some against, the public hearing will continue and action was deferred until the commission’s next meeting on Tuesday, Oct. 27.