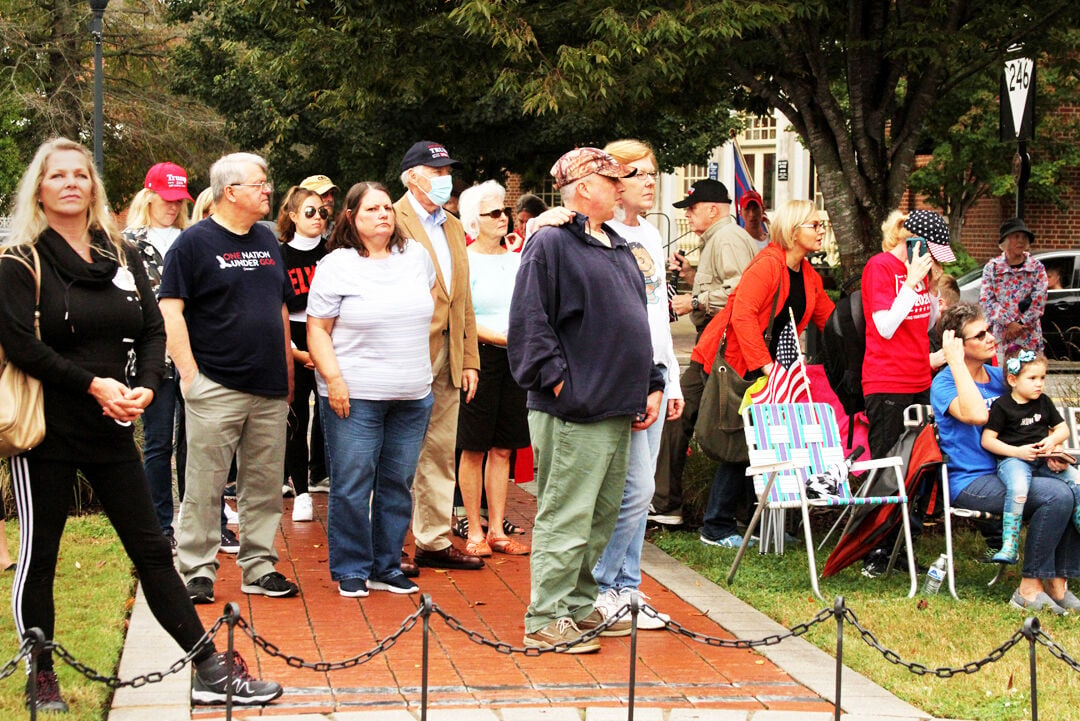 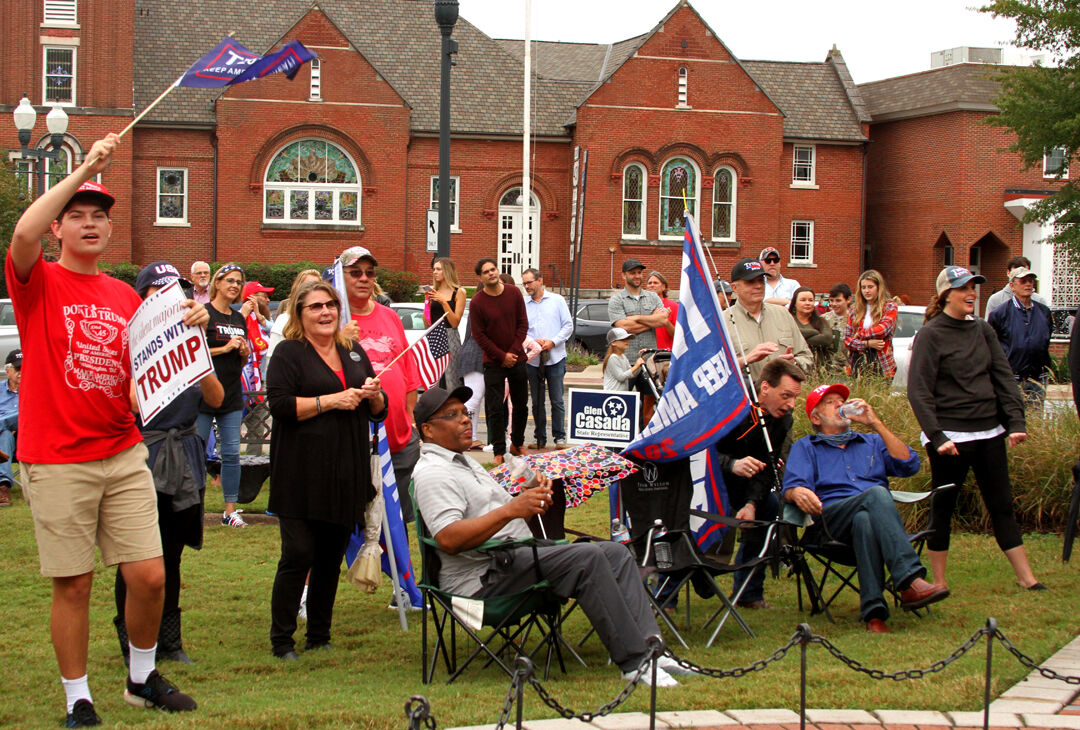 A light drizzle early on didn't prevent a mixed crowd of about 250 from gathering at Veterans Park Sunday afternoon for the Rally4Freedom in support of state and national candidates. 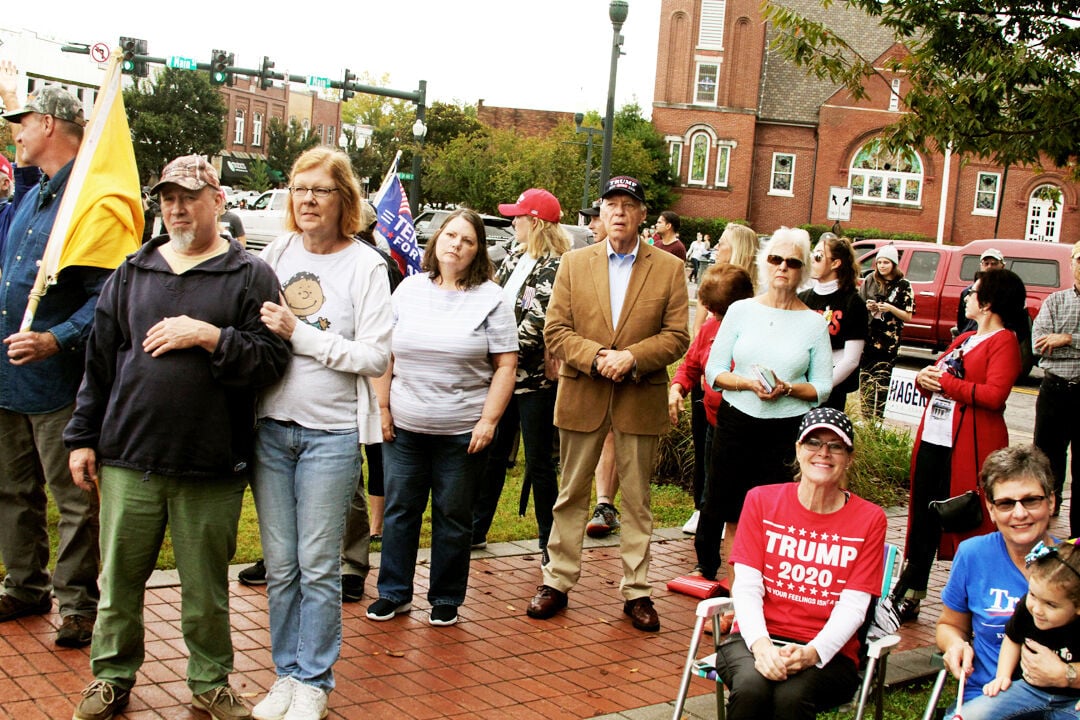 A light drizzle didn't stop about 250 people from showing up and waiting for the opportunity to show their support for state and national Republican candidates. 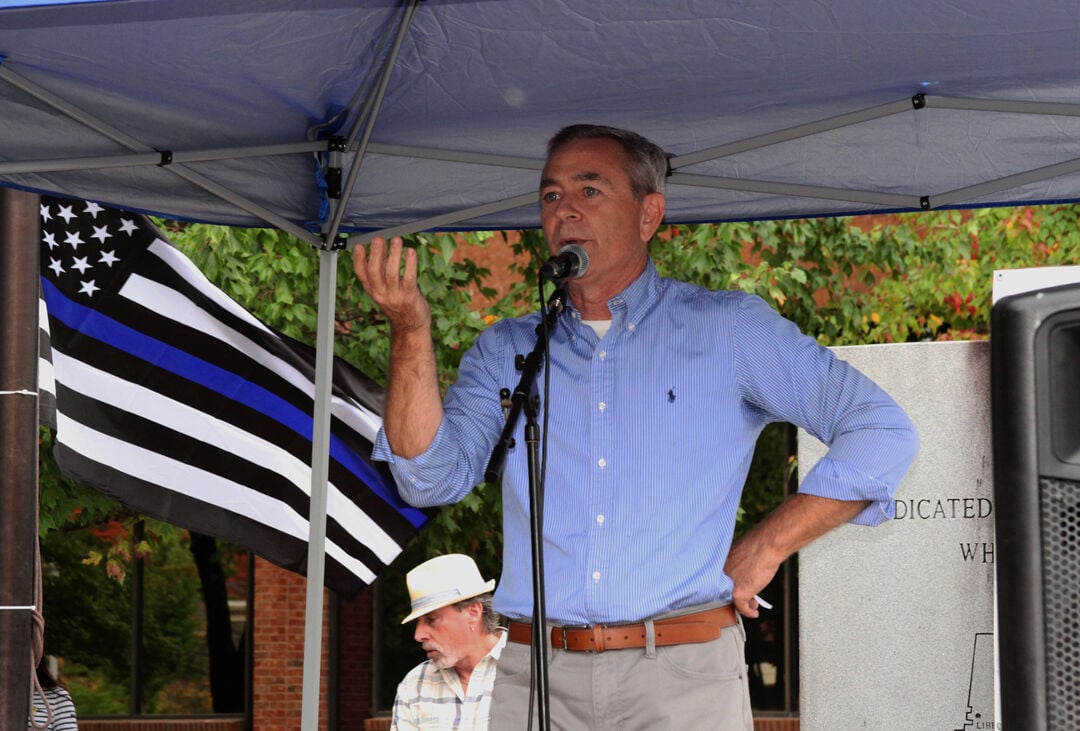 Tennessee state Rep. Glen Casada talks about accomplishments of the state legislature he's been a part of since 2003. He is running for re-election. 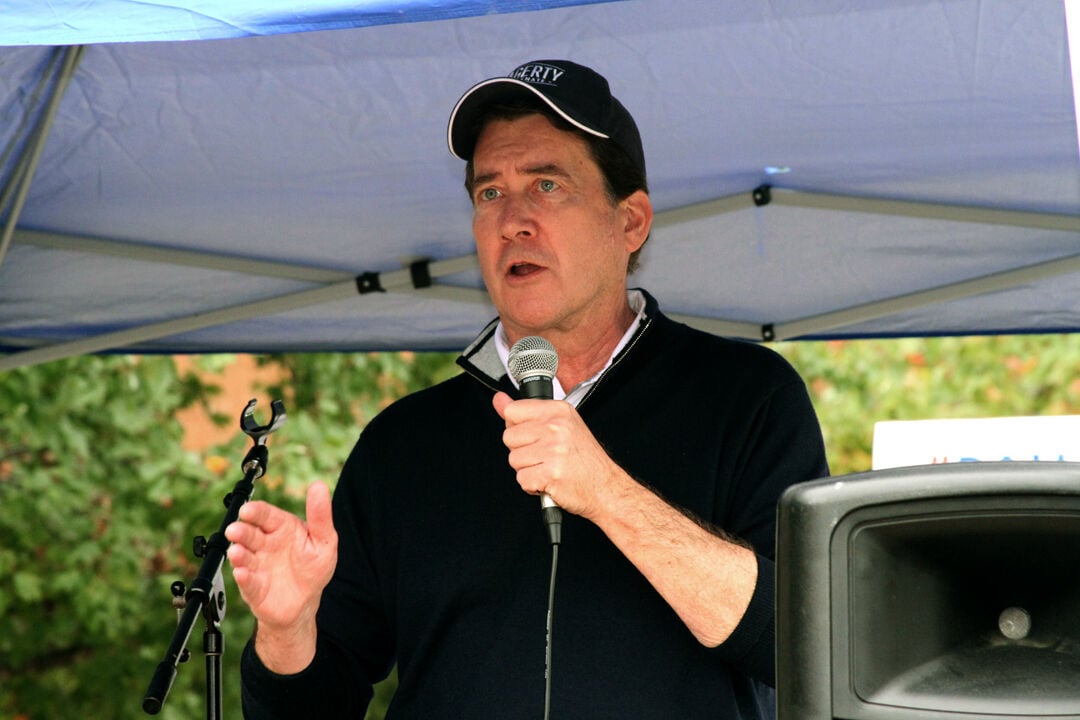 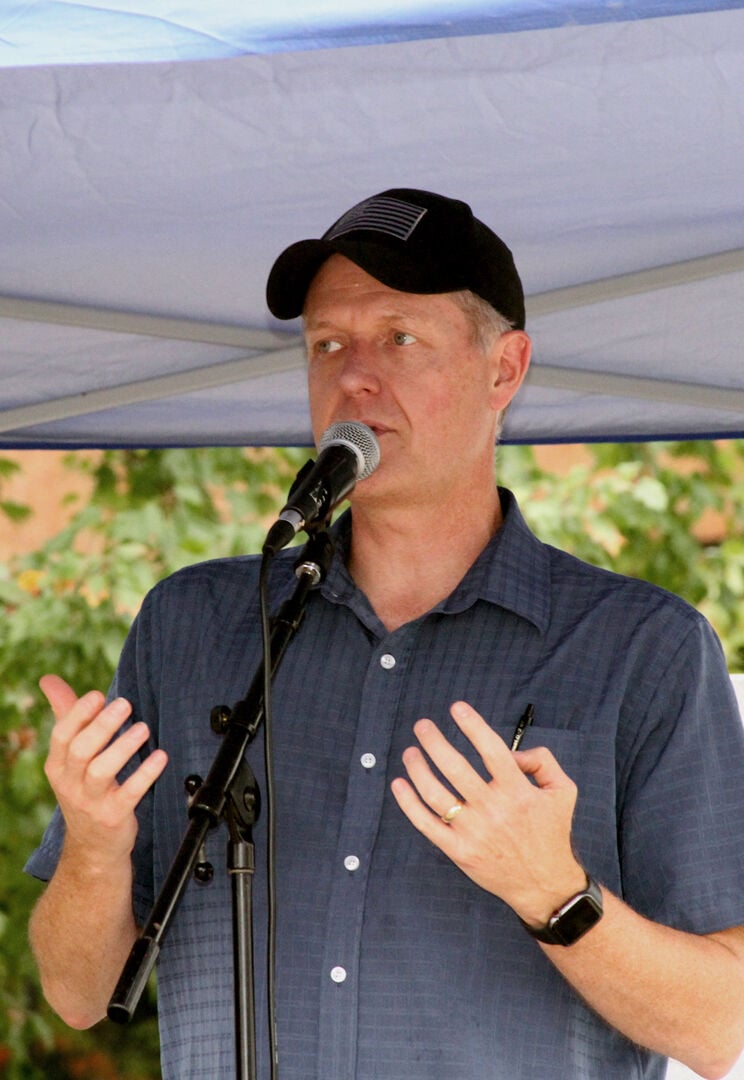 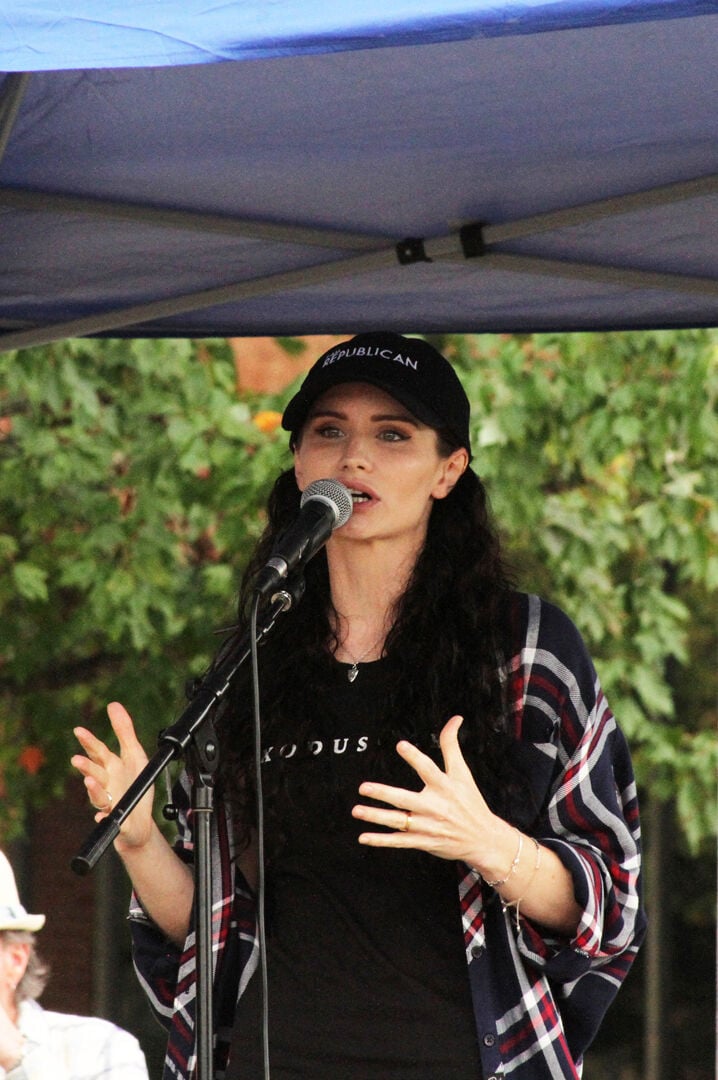 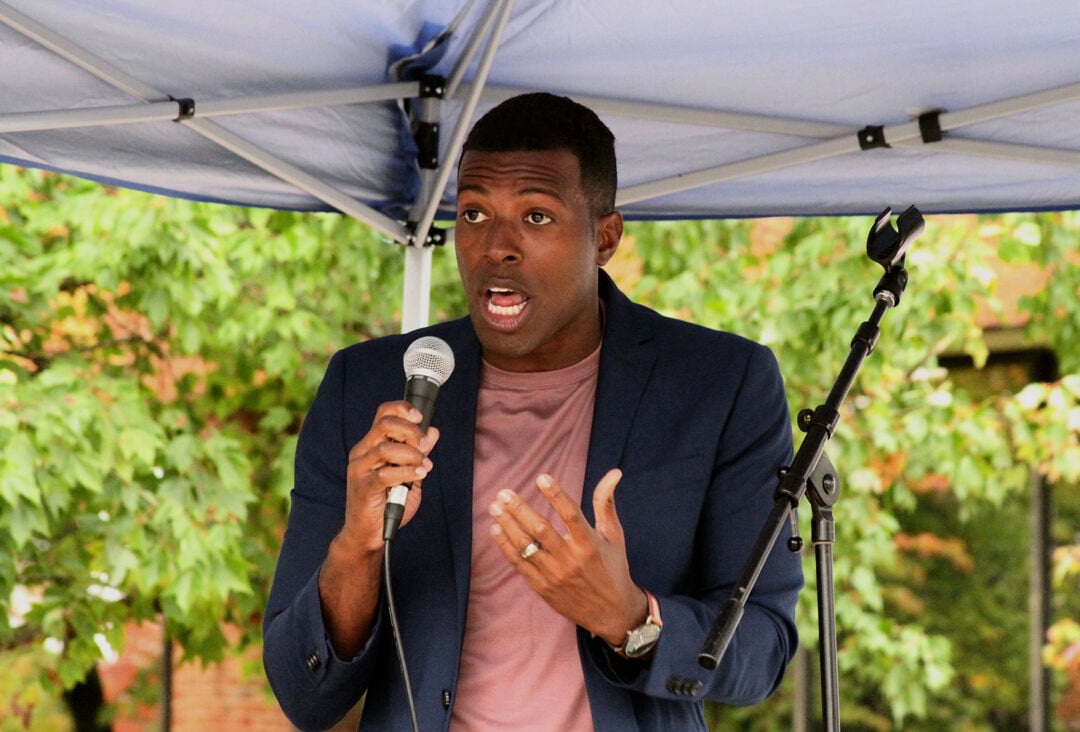 Fox political commentator and veteran Rob Smith speaks about the love he has for America and how he became a conservative Republican. 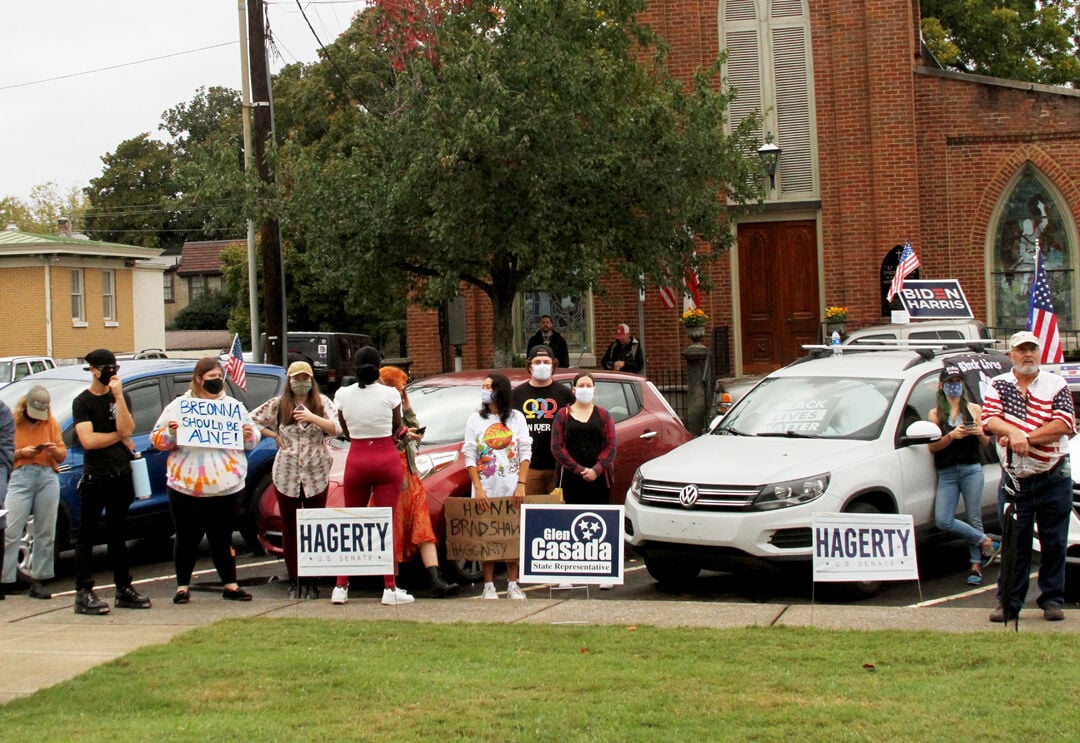 About a dozen protesters showed consideration while gathered along West Main Stree videoing the Rally4Freedom in Veterans Park at Five Points. 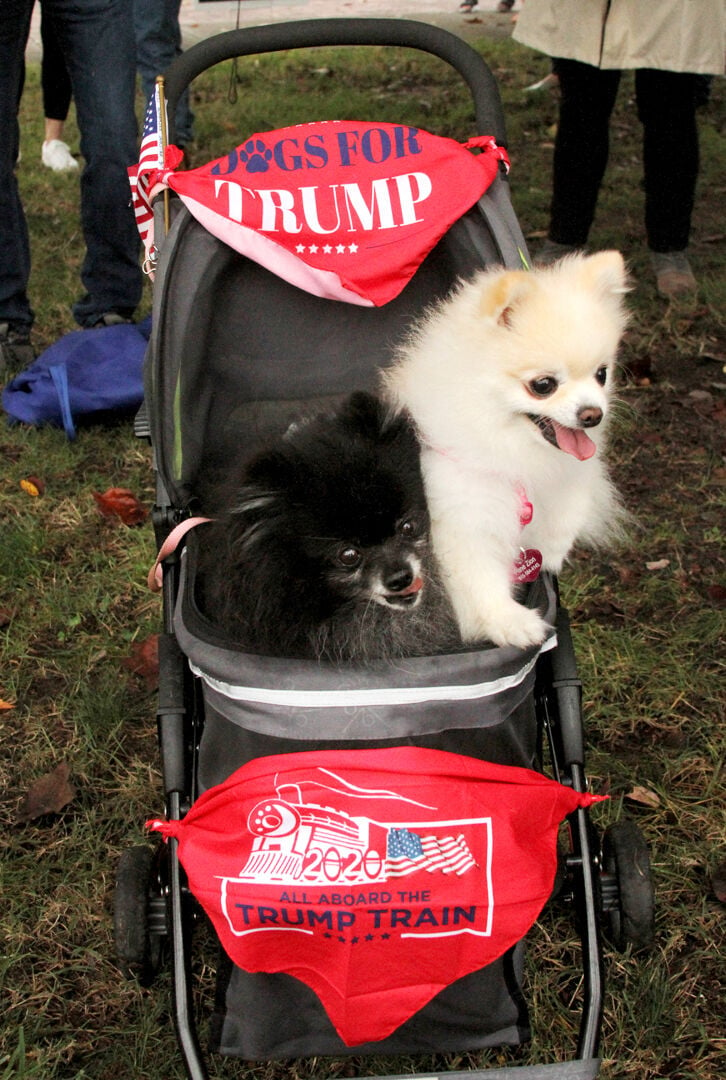 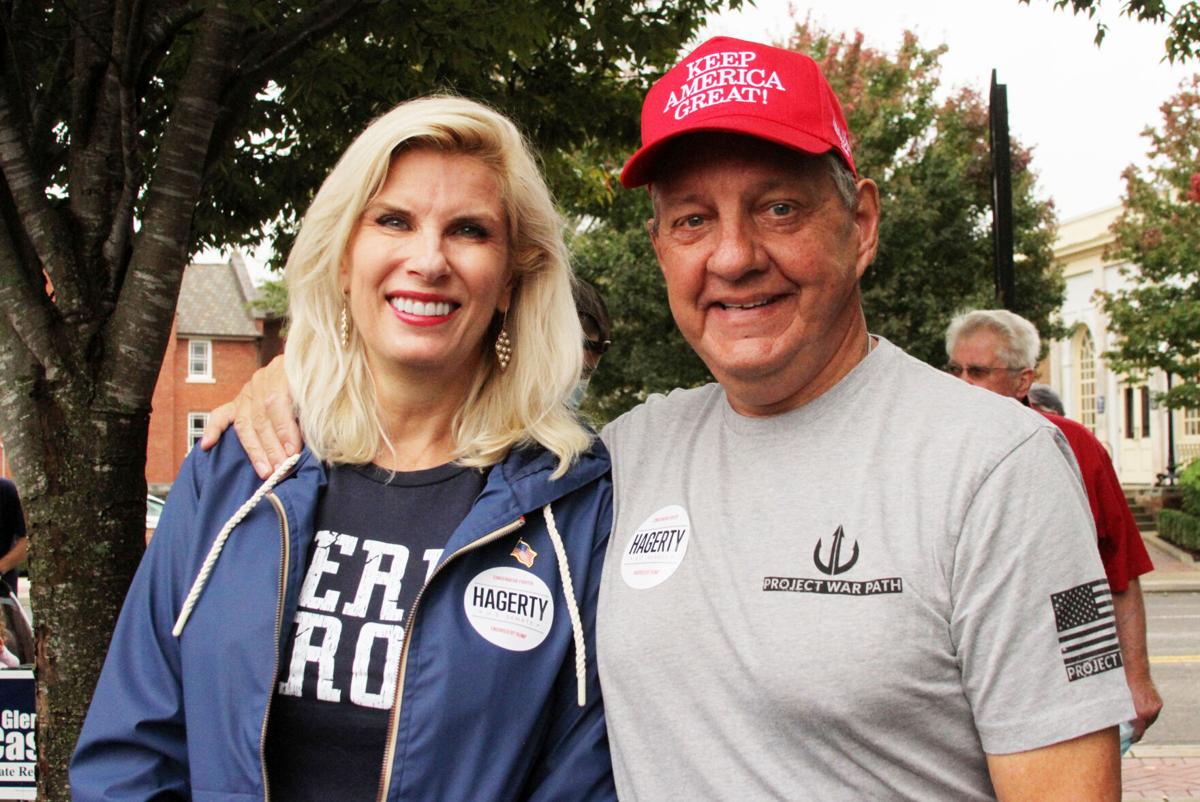 A light drizzle early on didn't prevent a mixed crowd of about 250 from gathering at Veterans Park Sunday afternoon for the Rally4Freedom in support of state and national candidates.

A light drizzle didn't stop about 250 people from showing up and waiting for the opportunity to show their support for state and national Republican candidates.

Tennessee state Rep. Glen Casada talks about accomplishments of the state legislature he's been a part of since 2003. He is running for re-election.

Fox political commentator and veteran Rob Smith speaks about the love he has for America and how he became a conservative Republican.

About a dozen protesters showed consideration while gathered along West Main Stree videoing the Rally4Freedom in Veterans Park at Five Points.

Sunday afternoon’s Rally4Freedom in Veterans Park at Five Points in Franklin was only slightly dampened by the light drizzle early in the festivities. As the crowd grew horn blowers circled the park for a short time and about a dozen protesters with signs gathered along the West Main Street side of Veterans Park.

The rally was organized by Robby Starbuck, a filmmaker and political commentator, and sponsored by Wang Vision Institute. Musician Landon Newsom, an ambassador in the fight against human trafficking, and Cheryl Brown, chairman of the Williamson County Republican Party also took part.

The rally brought together a diverse group of speakers, including Fox News commentator Rob Smith and Sean Davis, one of the co-founders of The Federalist, a web magazine, along with a few politicians in an effort to underscore why they believe freedoms are being lost, to provide information and to keep the excitement high going into the upcoming national and state elections.

After singing the national anthem, Newsom spoke about the issue of human and child sex trafficking, how open borders are a pipeline for trafficking and the support the issue has received from the White House.

“President Trump donated his own money and assured federal money will go toward the fight,” she said. “Once again, we will be the party that frees the slaves.”

Davis took the microphone and told those gathered, “We didn’t send our representatives to Washington to erase the risks in life or to keep us safe. We sent them to protect the Constitution, which exists to keep us free.”

He called on those in the crowd to hold their representatives accountable.

State Rep. Glen Casada, who is running for reelection, provided a list of reasons why people are flocking to Tennessee to live and challenged those who have been here a while to educate the newcomers about why Tennessee is such a great place to live. He said that Tennessee has the lowest debt among all 50 states and the lowest taxes and it happened because of Tennessee’s conservative values.

State Sen. Jack Johnson also spoke. Johnson represents all of Williamson County in the Tennessee General Assembly, is the majority leader of the state senate.

Bill Hagerty, a former U.S. ambassador to Japan, is running for the U.S. Senate seat that Sen. Lamar Alexander will be leaving at the end of this year’s Senate session. Hagerty said he has a plan to reinvigorate the economy as it struggles to bounce back from the setbacks created by the pandemic, to create opportunities for personal success and to protect religious freedom, which, he says, has been under siege for a decade or more.

Starbuck is a former Hollywood director. After he outed himself as a conservative on “Fox & Friends,” he said he had to leave town. Starbuck fired up the rally as he spoke about the value of loving America and freedom.

“My family came from Cuba, and I can tell you freedom is important,” he said.

Sitting back being complacent and thinking it will always be there is the surest way to lose that freedom, he added.

Starbuck spoke about how billionaire George Soros has slowly taken over district attorney offices throughout the country. Now rioters go unpunished and people who try to defend themselves are arrested and prosecuted.

Smith followed with a passionate talk about loving America.

“We have to build a people in this country who are proud of where we are, a people who want to protect and conserve all the amazing things that this country has to offer,” he said. “I came to love this country when I was in the military.”

As a Black teenager with no plans for the future, Smith joined the Army when he was 17 and was deployed to Iraq.

“I served next to people who were Black, White, Asian, Latino,” he said. “It didn’t matter. What did matter was we were serving this great nation of ours.”

He went on to say color, religion, sexual orientation “are used to divide us.” What really matters is loving and appreciating this country so much that “we are willing to fight and protect what we have: freedom.”

During his closing remarks, Starbuck thanked the protesters on West Main Street for being considerate throughout the event.

Seconds later, a man set off his car alarm and kept it going, successfully provoking a few at the rally to react. Cooler heads prevailed and the crowd was disbursed, but in the confusion, someone hit one of the protesters in the face.

Only liberals would protest freedom, but then again, they'd apparently rather have government tell them their every move. What I can't understand is, why don't they just move to a socialist run country or state? I hear California has nice weather and big handouts. Thank you to the Williamson County delegation at the state and federal level, you all are doing great work promoting less taxes, less regulation and more freedom! You all deserve re-election!

Robby Starbuck made a few music videos and Landon Newsom is his wife. They are both staunch Trump supporters who actually work for and get paid by Trump and Robby is constantly tweeted misinformation and lies. He is not a political commentator . . . he is a propaganda minister for Trump and I personally find him and his wife annoyingly hypercritical.

My first reaction is; did this “Freedom” group get a permit to do this and when did they get the approval to gather? Second reaction is historical... I am a long, long time resident (early 60’s. Ancestors even earlier) of Williamson County and I love this place but have always been uncomfortable with the majority of inhabitants that espouse the beliefs this group is touting. That being said, I do not run and am proud to be a progressive person who supports the protestors and good citizens of this county who are fighting against racism, neo-Confederates, anti- immigration and the wrong belief that “Freedom” means supporting those things that hurt and purposely degrade those wanting a healthy life, clean environment and equality for All.