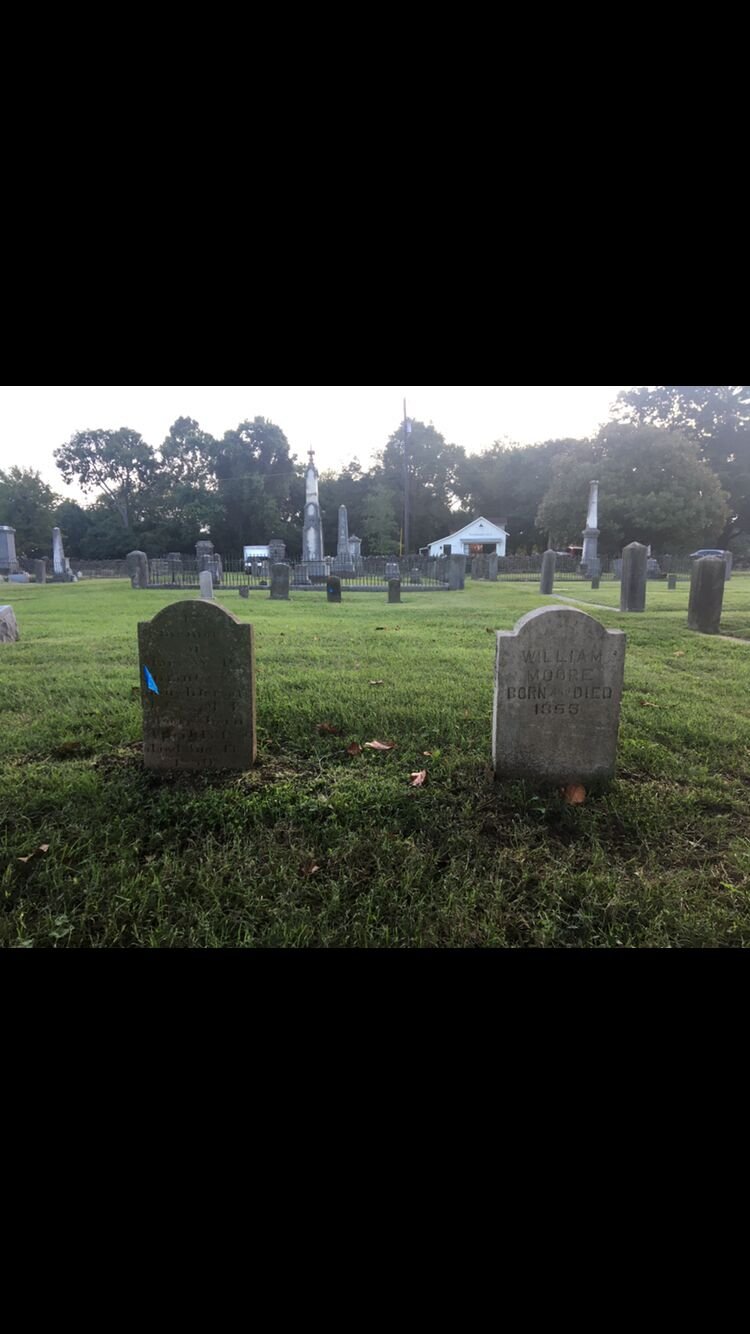 A before and after picture of a cleaned headstone. 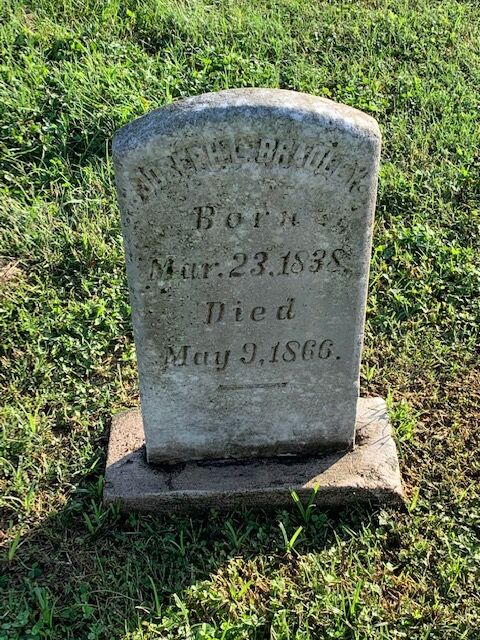 Joseph Bradley was buried in a Franklin cemetery. 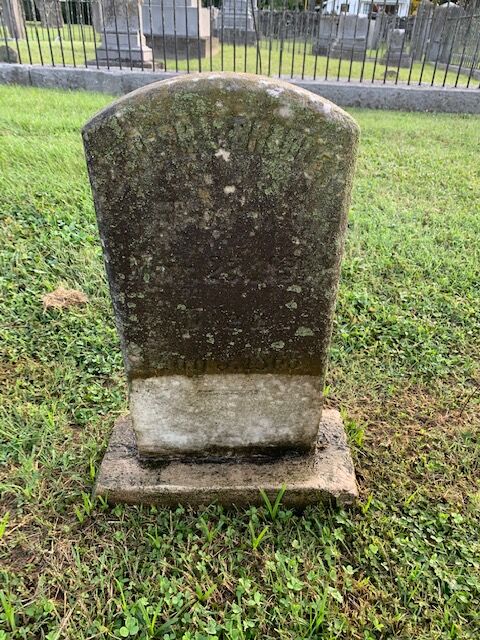 Joseph Bradley's headstone before it was cleaned. 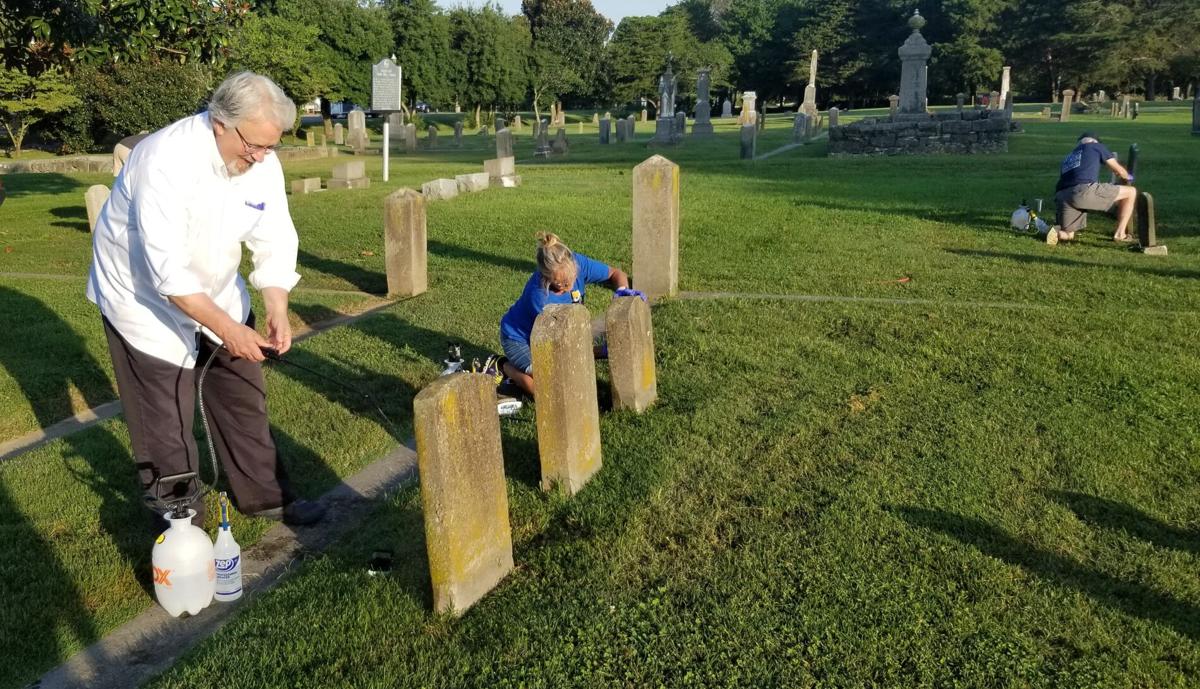 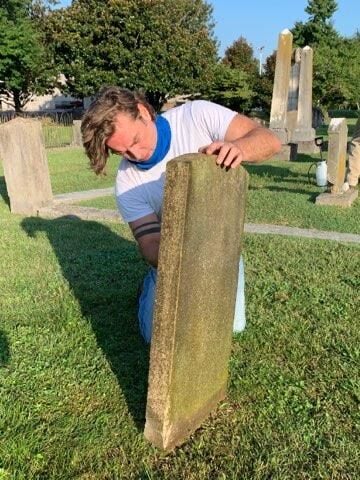 A before and after picture of a cleaned headstone.

Joseph Bradley was buried in a Franklin cemetery.

Joseph Bradley's headstone before it was cleaned.

Those heading into Franklin from the north may notice the juxtaposition of old and new as they near historic downtown.

To the left, a lot with two trendy trailers, serving up donuts and coffee, a newly paved parking lot and the city’s oldest burial plots, surrounded by limestone walls.

City Cemetery and Rest Haven are the final resting places of Revolutionary and Civil War veterans, prosperous founders of the city and county, as well as the not-so-prosperous. Captain Tod Carter, who fought for the South and died on his family’s land during the Battle of Franklin, is buried there.

A city-commissioned report has described the condition of the graveyards as “desperate,” with broken and caved-in headstones and ironworks. Some gravestones are nearly overgrown with grass and weeds, and many of the names are illegible.

As Franklin’s population and status have grown, residents and visitors have also grown curious about the history and maintenance of the city’s gravesites. Renewed interest has inspired all three local Rotary groups to restore and preserve history on the precipice of being lost.

Later, while out for a run, Shairs noticed the grave conditions of the cemeteries.

“There were a lot of names I couldn’t read,” he said. “We’re literally and figuratively losing the history.”

The City Cemetery, located to the east of 4th Avenue South, opened in 1811, 12 years after Franklin’s founding. There, Black and white residents were buried.

Across the street to the west, Rest Haven Cemetery, which opened in 1855 during the city’s growth, was reserved exclusively for whites.

In 1884, the Toussaint L’Ouverture Cemetery across Hillsboro Road opened. It was established on 4 acres purchased by a group of 44 local African American men and named after the leader of the famed Haitian slave rebellion. It was designated as a burial site specifically for Black residents.

While the other two plots are city-owned, a group of local families still owns the L’Ouverture graveyard, where Franklin resident Linda Mora has documented 1,200 graves.

Though all three cemeteries are on the National Register of Historic Places, no comprehensive inventory or burial register exists for the city-owned sites.

In 2014, the management of the cemeteries shifted from the Franklin Streets Department to the Parks Department.

A grant from the state historic commission allowed for a study and report on their condition, which resulted in a 152-page document detailing the history of local graveyards and actions needed for preservation and restoration.

According to the report, there are between 285 and 373 marked graves in the City Cemetery, with around another 300 unmarked African American graves. At Rest Haven, the number is approximately 475.

But Franklin’s Urban Forest Superintendent Brian Walker said the total number for the city-owned yards is actually much higher. According to a ground-penetrating radar (GPR) study done by the city, there are 1,506 unmarked graves in both cemeteries, bringing the tally of the two closer to 2,300 graves. Many headstones may have been lost over the years due to flooding.

The report stated, “Unfortunately, maintenance has been minimal and it is reported that in the past local citizens, in an effort to control rank vegetation, simply burned off the cemeteries yearly. Even more recently it appears that maintenance has been limited to mowing.”

“Simply put,” the authors concluded, “after years of deferring preservation activities, the city of Franklin is facing a massive maintenance responsibility.”

Walker noted that the families of the dead were traditionally responsible for maintaining the headstones. But in recent years, the city has realized a responsibility to preserve the sites.

“We recognize that family members may or may not be in and around Williamson County anymore, but there’s a valuable historic aspect to these cemeteries,” he said.

Recommendations from the report are outlined in painstaking detail, but the authors identified five main action items for restoration and preservation of the cemeteries:

2. Repairing the stone walls, fences, and ironworks inside and outside the cemeteries.

5. Posting of regulatory signage at cemetery exit and entry points.

At Tuesday night’s Franklin Board of Mayor and Aldermen meeting, leaders approved two agenda items related to the cemeteries. One item accepted a $6,000 grant from the state historic commission to begin restoring the ironworks, and the other will allow private groups to raise preservation and restoration funds.

“Cemeteries are such a pivotal part of any community,” said Ravener, who is also on the Civil War Historical Commission. “For any community to take pride and ownership in maintaining and preserving these locations is central to overall good community spirit.”

Ravener, a U.S. Navy veteran, said he first visited the cemeteries in 2009 for a ceremony reinterring a man known as Franklin’s Civil War “Unknown Soldier.”

His interest lies not only in preservation, but in Franklin’s veteran history.

“They are a cog in the wheel of the larger story of Franklin itself,” Ravener said.

The Future of the Past

With help from Walker and the city of Franklin, the Evening Rotary recently began the first of several planned cleanups. First up is restoring the headstones, using the chemical solution D/2.

“You just can’t go in there with any cleaning product or power washers,” Ravener said. “In many cases, the stones are porous and already in disrepair.”

Walker explained the process, which involves wetting the stones with water then applying D/2 and scrubbing with a soft bristle brush. So far, he said, the Downtown Franklin Rotary and Civil War Historical Commission have cleaned about 50 markers.

“It’s all legible; it looks so much better,” Shairs said. “You’re taking away decades and decades of mildew and mold.”

Shairs and Ravener have seen interest from members of each Rotary club. Through concerted efforts, they hope to continue contributing, from repairing the stone walls to replacing the ironworks, not just at the two city-owned cemeteries, but also at L’Ouverture.

For Walker, a 13-year veteran of the Franklin Parks Department, the graveyards are full of rich history and connections. One thing he has begun to notice: grave sites with birth and death dates on the same day signifying the passing of a newborn, a reminder of the precious fragility of life.

“I think there’s opportunity there to learn about ourselves,” he said. “It’s not just a marker out there. There’s a story to be told from these sites.”