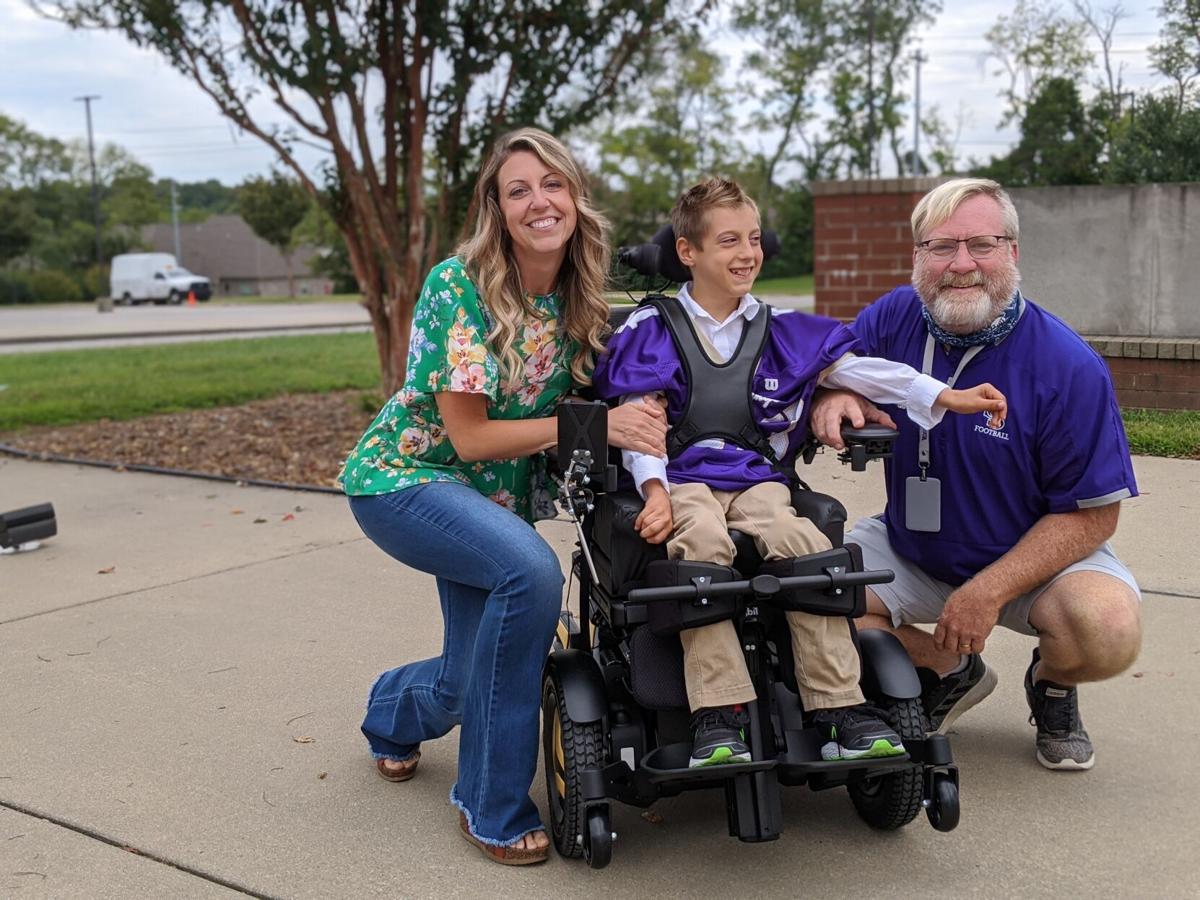 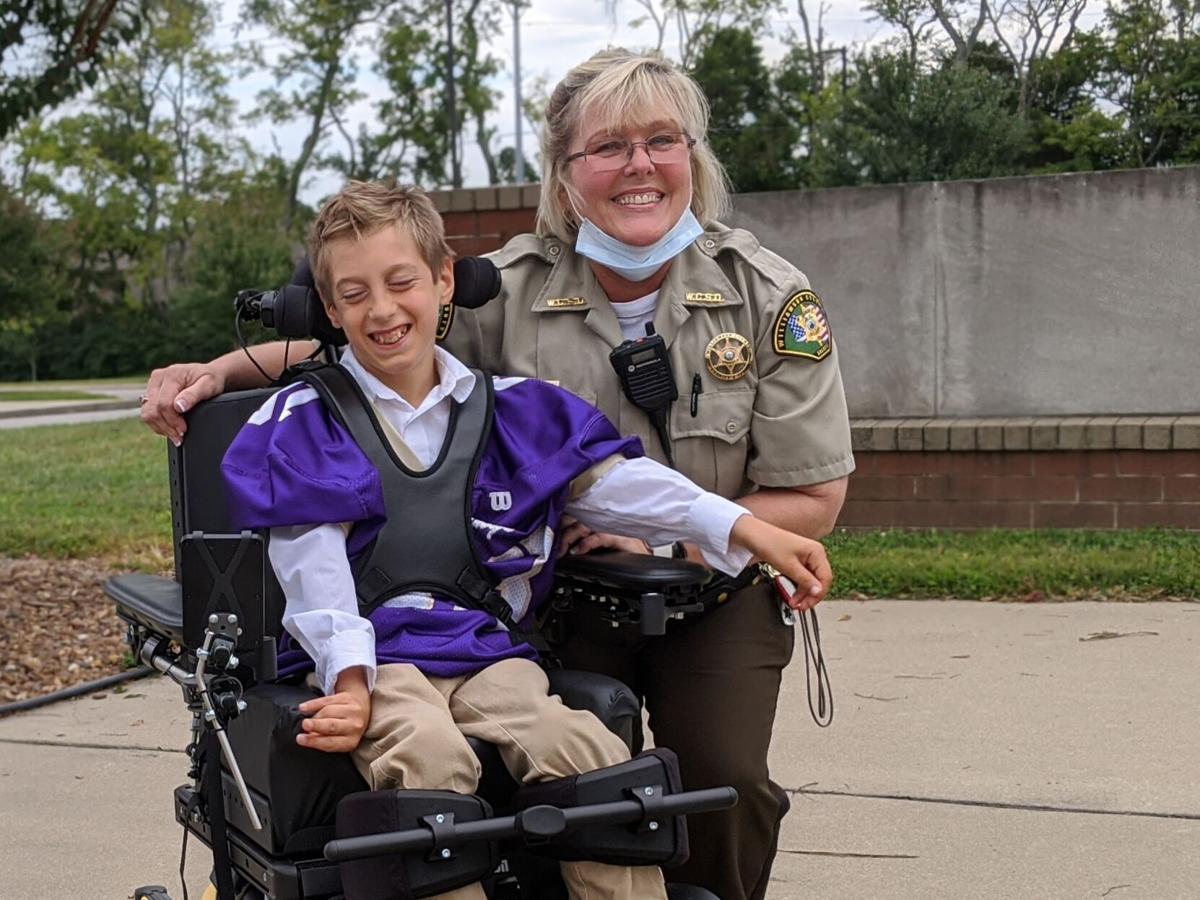 Every parent worries about their child fitting in at middle school, and BrandiLee Schafran is no exception.

But just a couple months into her son Gavin’s sixth-grade year, she has seen the positive impact he has had on other kids and how the school’s junior varsity football team has embraced him as a friend and the youngest assistant coach the school has ever seen.

A few weeks into the school year, BrandiLee saw Gavin interact with football coach Jason Koch at Spring Station Middle School. Knowing her son’s love for sports — football, hockey, lacrosse, basketball, you name it — she asked if there was anything her son could do to be part of the football team.

Gavin isn’t able to be a traditional player on the field. His physical mobility is limited, so he sits in a special chair that allows him to move around as fast as other kids. He has special devices that not only allow him to speak more clearly but also allow him to honk, like a car horn, to call attention.

“(Koch) asked Gavin right then and there if he wanted to be his assistant coach,” BrandiLee said. “Then he lit up and was beaming and said yes.”

While telling this story with Gavin sitting across from her, BrandiLee saw a smile on her son’s face and asked him if he likes being the assistant coach. He flicked his eyes upwards to say “yes.”

BrandiLee said that when she was in labor with Gavin, he wasn’t getting enough oxygen, which led to complications after his birth. He had seizures and stayed in an intensive-care unit for two weeks. She said she noticed something wasn’t quite right about the way Gavin positioned his arms, and at six months, the doctor told her and her husband that Gavin showed characteristics of a child with cerebral palsy.

“I will never forget those words,” she said.

Gavin received an official diagnosis when he was a little older. Despite the challenges he and his family have faced as he has grown, Gavin is just a classic sixth-grade boy in many ways. Koch said that he’s “sweet and smiley and all that, but he is mischievous.” He said that sometimes Gavin will drive by people sitting with their elbows on the table and will knock their arms over the edge, or he’ll crack cleverly timed jokes in class.

“He knows the ways of the world, let’s put it that way. He’s street smart,” Koch said. “He’s just the best combination, really. You can mess with him, and he gets it.”

But he’s not only street smart, BrandiLee said. She said that he is pretty much on par with his grade, and though his ability to express through language is limited by cerebral palsy, which affects his motor skills, his ability to understand is excellent. While others have given him tips on how to best communicate and express himself, he has found ways beyond that to string together words, sounds and facial expressions to clearly get his message across and exhibit his lively personality.

It’s that personality that has captured the heart of so many at the school, including school resource officer Marsha Hellstrom.

“I came out to get to know him, and we struck up a good friendship. And I learned how to communicate with him, and I just love him,” Hellstrom said, emotion welling up in her throat. “He’s my hero every day.”

Hellstrom said that Gavin, who is always smiling, has inspired her and taught her how to better enjoy life. Gavin held Hellstrom’s hand as she spoke about him.

During his time as assistant coach on the football team, Gavin has also captured the heart of the players to the point that they’re disappointed when he can’t make a game, Koch said. But Gavin’s not just there for moral support — he knows the language of the game.

“It’s been rough. We don’t see eye to eye. I’m a conservative play-caller; he likes to go wide open,” Koch said in jest, eliciting a laugh from Gavin.

But Koch added that having Gavin as an assistant coach goes beyond the game of football.

“Here’s the deal with my whole view on him being my assistant coach: While we think we’re doing something good for Gavin … he’s fine. He’s a good dude. He’s going to be all right through his life,” Koch said. “He doesn’t need to be my assistant coach, but the other kids out there need Gavin to be out there because they need to learn how to love their brother no matter the differences — Gavin’s differences between them. They need to learn to live their life if someone’s skin color is different, you know what I’m saying?”

Koch said that after leaving the business world, where he spent 20 years of his career, he feels like he’s fulfilling his purpose in his current job.

“I want to do good in the world, right? I want this world to be a great place, but the way I’m wired, I’m not going to go march or go do stuff,” he said. “So, how can I do something to help this world out? I can show up at Spring Station and hang out with Gavin.”

He added that he’s proud of the way the Williamson County School District includes students with disabilities with the masses rather than separating them the way they were when he was growing up.

As BrandiLee prepared to grab some dinner with Gavin before the football game that night, she said that opportunities like this not only benefit people like her son but the world around them, too.

“I always get nervous about kids … genuinely wanting to be his friends, but I think that the opportunity for him to do this, it is — I guess, as they say — equal opportunity for both the players and coaches and Gavin because it just gives them more ways to interact with him and to see, like, ‘Oh, yeah, why wouldn’t Gavin be able to come and be assistant coach?’” she said. “Our world is changing, and there’s so much more inclusivity than there used to be.”

BrandiLee said it’s almost traumatizing to think about how cerebral palsy may affect Gavin’s future, but she couldn’t imagine life without him.

“The joy that he brings is pretty indescribable,” she said.