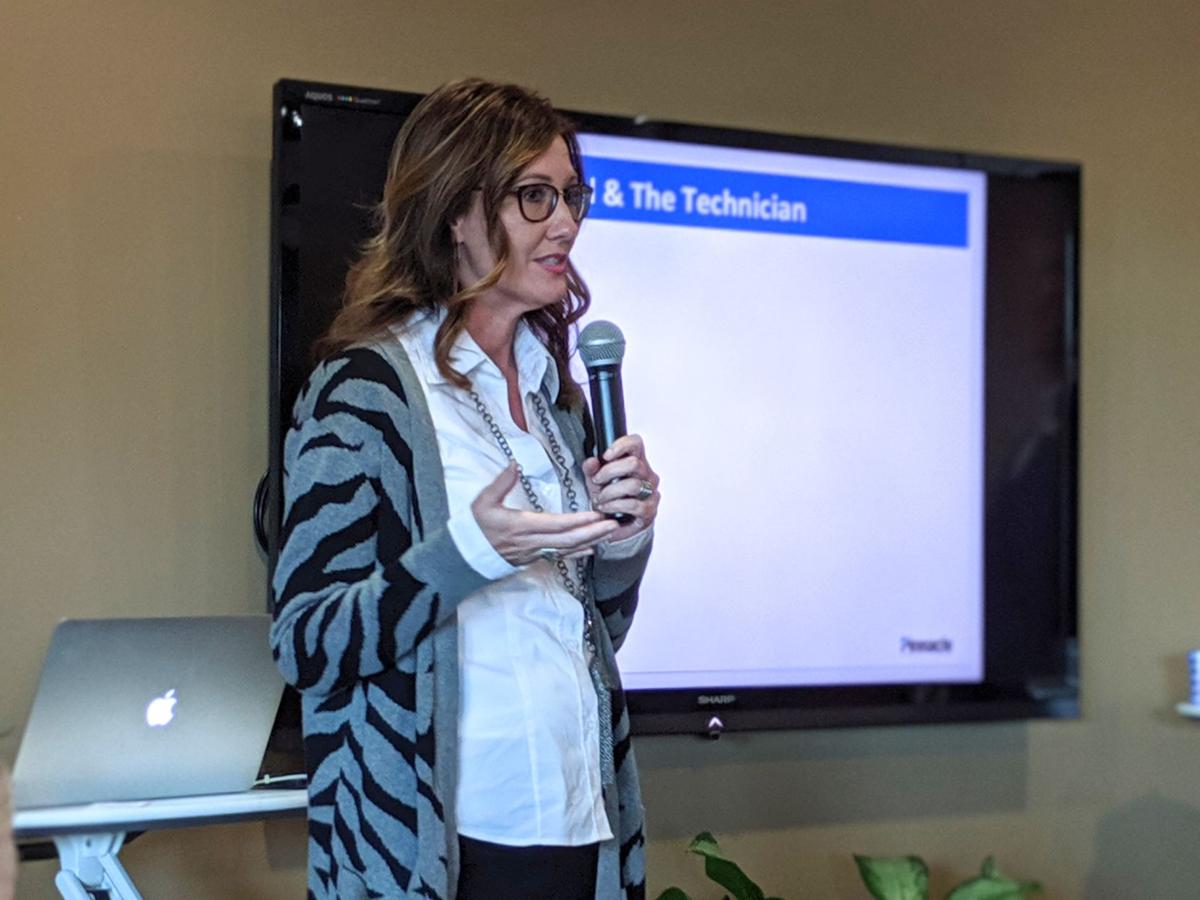 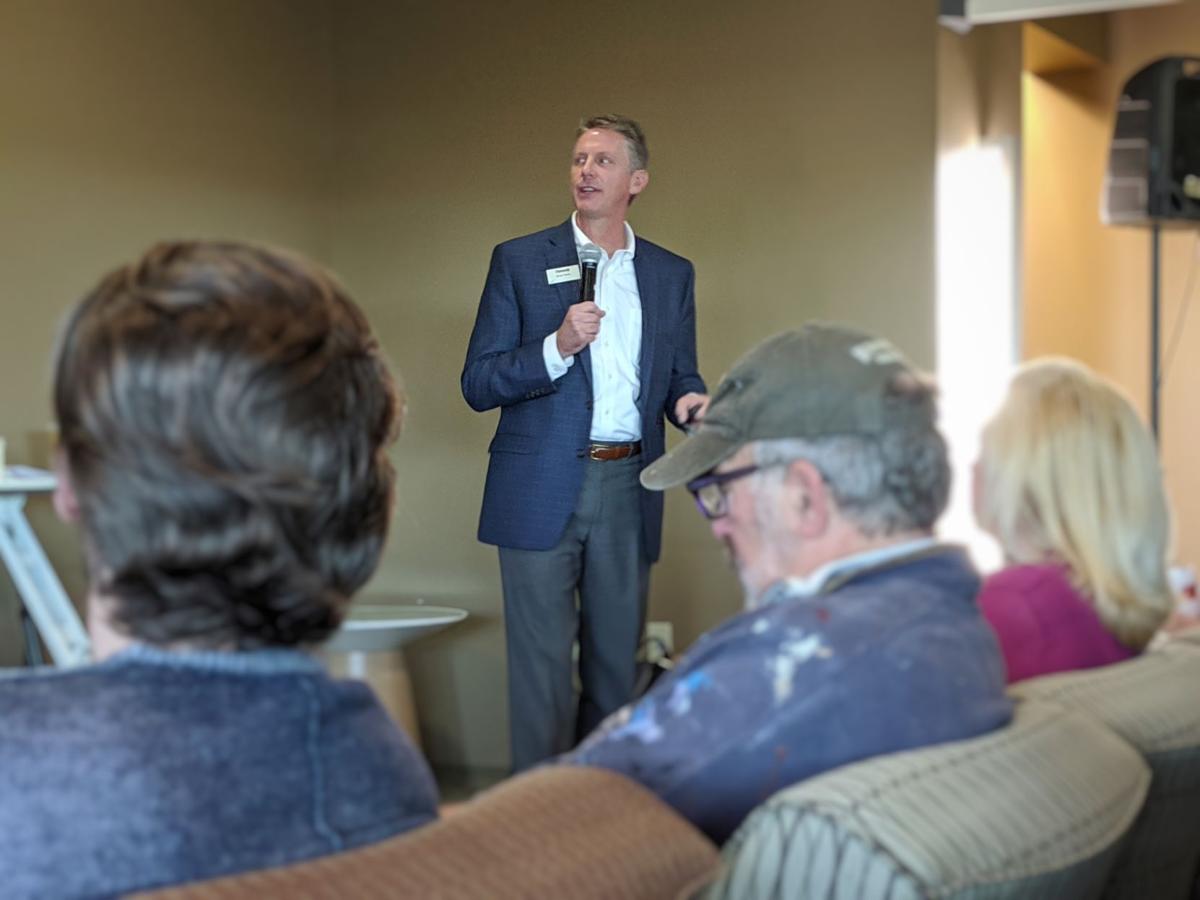 Area manager of Pinnacle Financial Partners Brad Dunn discussed at the First Friday event the characteristics of three different work roles: the technician, the manager and the entrepreneur.

Area manager of Pinnacle Financial Partners Brad Dunn discussed at the First Friday event the characteristics of three different work roles: the technician, the manager and the entrepreneur.

Williamson County is becoming a major hub for entrepreneurship, a theme trickling down even into the county’s schools as public and private entrepreneurial programs emerge, and speakers at this month’s Williamson, Inc. First Friday discussed what it takes to move from an employee to an employer with a group of current and future business leaders.

Financial advisors with Pinnacle Financial Partners Brad Dunn, who is also an area manager, and Tiffany Jones led a discussion centering around a book titled “The E Myth” by Michael Gerber in which they outlined three types of businesspeople: the technician, the manager and the entrepreneur.

Dunn explained the technician is someone who focuses on the present, who completes day-to-day tasks to keep a business running. He said the manager, while positioned towards the future, is focused on the past, keeping up the status quo. Finally, the entrepreneur is focused on the future — the idea person.

Jones said the entrepreneur is typically the person in a business who always wants to move forward with a new project and is reined in by the managers and technicians. Dunn gave Oprah Winfrey, Elon Musk and Jay-Z as examples of entrepreneurs.

“These people have created brands,” he said. “They’ve created companies, corporations. They have been disruptors in the marketplace with things that weren’t there before.”

Vincent Barnes, who started an outsourced human resources company called Barnes HR four years ago, said the key to branching off from someone else’s company to start your own is finding a need in the community and then building your market from there — and that’s exactly what he did.

“It got to a point where I said, ‘You know, I need to set my own shingle out. I’m tired of my job being eliminated, bought away, downsized,’” he said, describing his rocky background as an HR professional at growing companies that get absorbed into large corporations.

Dunn described this moment of wanting to pursue one’s own vision rather than working to establish someone else’s as the “entrepreneurial seizure,” a term taken from “The E Myth.”

“(Entrepreneurs) kind of come to a point where they say, ‘Man, (my boss) is nice enough, they know enough, but good grief, I just can’t do this for them anymore,’” he said, sharing a pertinent adage: “If you don’t build your dream, someone will hire you to build theirs.”

This statement hit home with venturing entrepreneur Karlita Zirker. With a background in accounting, she left her job of 17 years to pursue a personal career as a virtual assistant two weeks ago, hoping to build a collection of odd jobs, like Barnes, into a web of contracted positions.

She said she’s always felt the desire to start her own business but never really knew where to start, and one day, without knowing exactly where her feet would land, she went for it, following a sudden peace she felt.

She said she’s currently putting her name out there and working on networking and getting involved in the community, which is what brought her to First Friday. This is exactly what Barnes recommended to up-and-coming entrepreneurs like Zirker.

“Do as much research as possible as to businesses like that BNI-type concept, networking groups that would get together,” he said. “Make sure that you have a presence out there. Get your name around to things like this, where you can stand up and say, ‘Hi, I’m Vince Barnes. I coordinate the Williamson County SHRM events every month.’”

To help business leaders move deeper from the networking process to peer development, Pinnacle holds a six-week MasterMind program, where business owners and leaders can get together in small groups, work through “The E Myth,” and discuss business issues together to help each other’s companies prosper. The next group begins in January.

For more information on the MasterMind program, visit pnfp.com, and to learn more about Williamson, Inc. events, visit williamsonchamber.com.