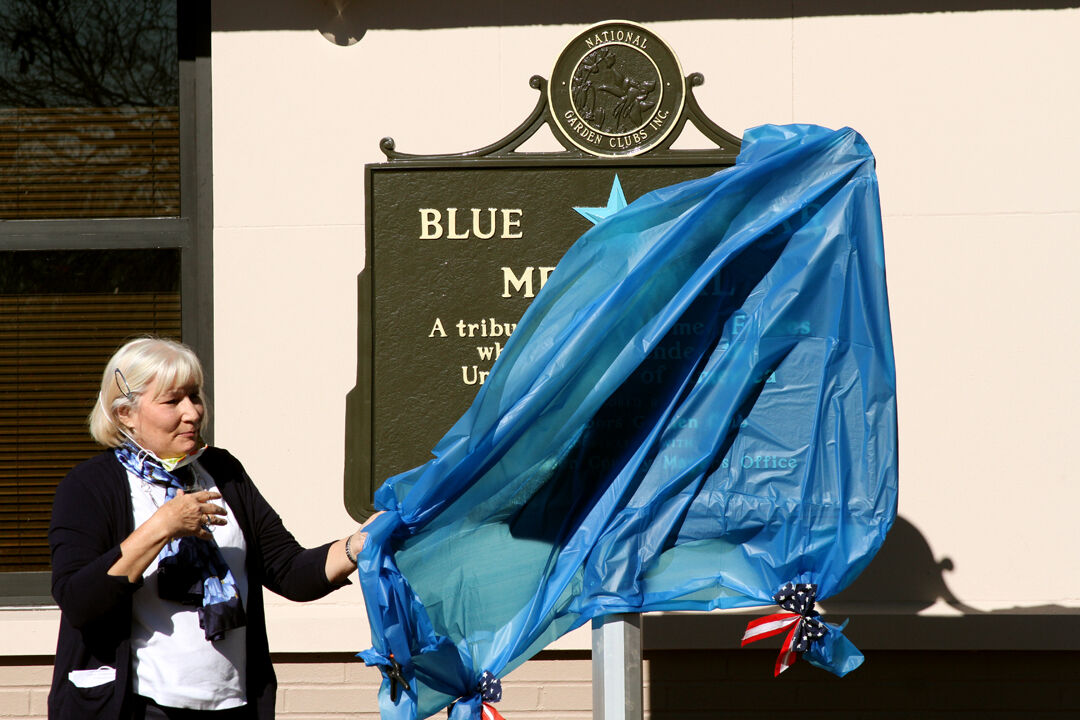 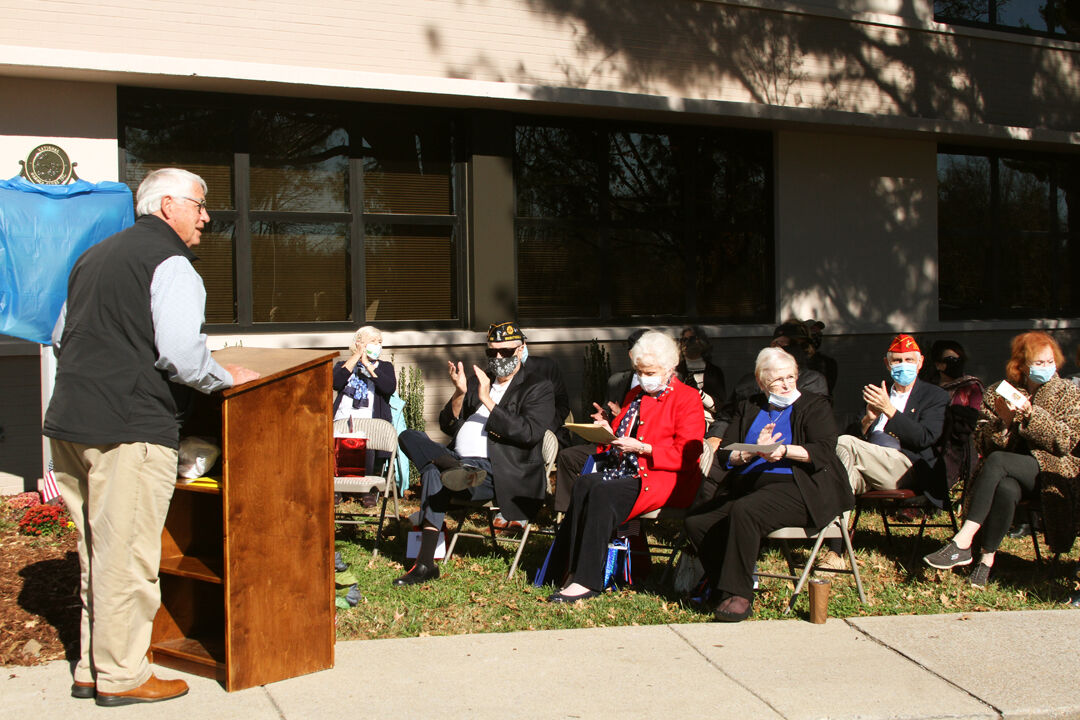 Williamson County Mayor Rogers Anderson speaks to a gathering of New Neighbors Garden Club and veterans during a Blue Star Memorial Marker Program and unveiling of a marker at the county administrative complex. 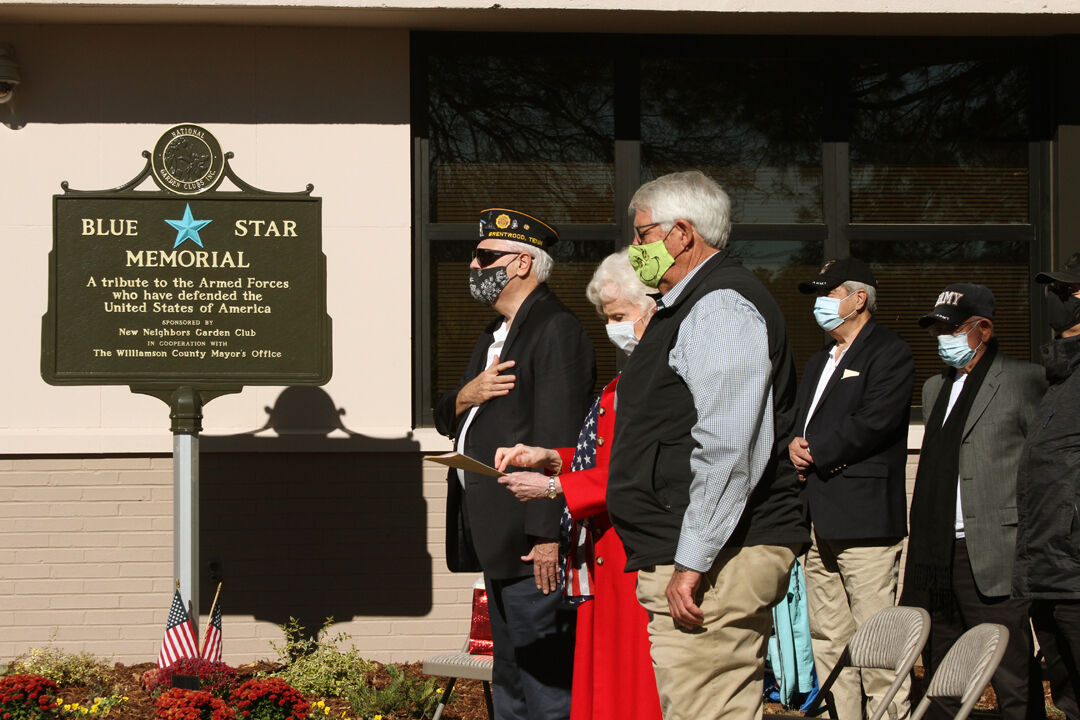 The ceremony ends with those attending the ceremony singing "God Bless America." 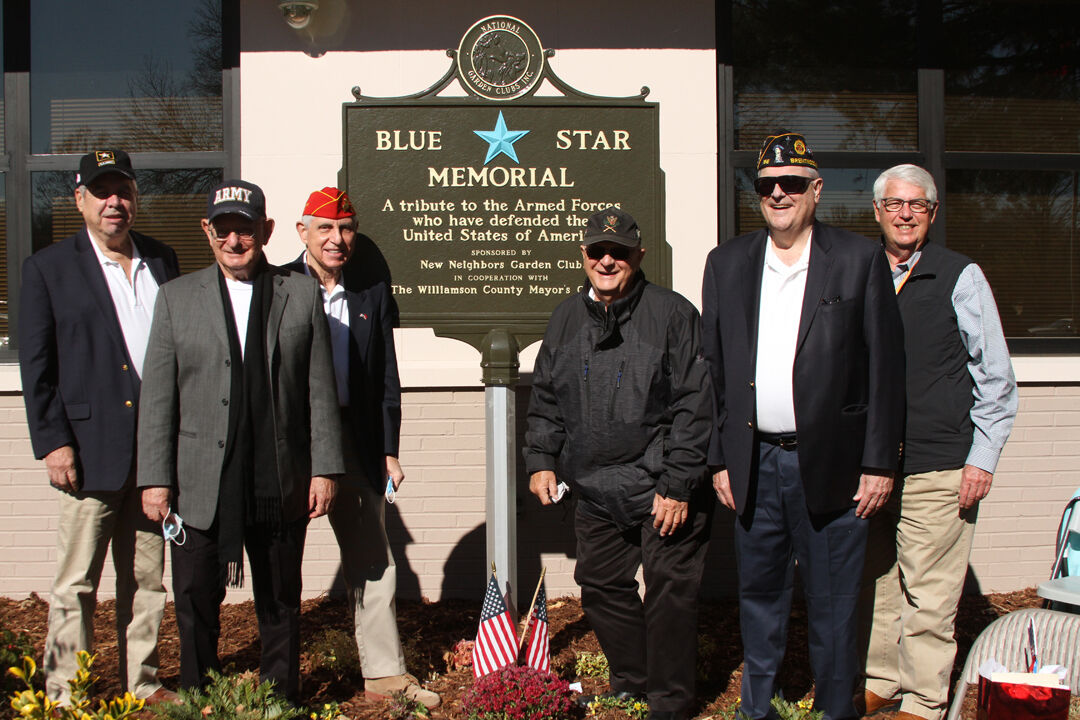 Williamson County Mayor Rogers Anderson speaks to a gathering of New Neighbors Garden Club and veterans during a Blue Star Memorial Marker Program and unveiling of a marker at the county administrative complex.

The ceremony ends with those attending the ceremony singing "God Bless America."

The New Neighbors Garden Club on Tuesday morning unveiled a Blue Star Memorial marker that was recently erected outside the main entrance of the county’s administrative complex.

Several individuals gathered and spoke on the lawn in front of the county complex before unveiling the marker, which is a tribute to the men and women who have served, are serving and will serve in the U.S. Armed Forces.

Gen. John Frame, a member of the Costco veterans group, spoke about a book — "Seven Miracles That Saved America: Why They Matter and Why We Should Have Hope," by Chris and Ted Stewart. The book chronicles several significant events that occurred and became a part of the story of freedom’s survival against all odds.

“The first was in 1492, when Columbus discovered the New World,” Frame said.

Others include the 1607 Jamestown story, the Battle of Brooklyn during the Revolutionary War, the creation and adoption of the U.S. Constitution, the Battle of Gettysburg in 1863, the Battle of Midway in 1942 and the attempted assassination of Ronald Reagan in 1961.

“When we’re in perilous times, a miracle has saved America,” Frame said. “When will the eighth miracle come? My answer is the miracle has always been with us: the U.S. military.”

“There’s been 50 million veterans since the Revolutionary War. They left a legacy of excellence ... and we honor them every day.”

Anderson spoke about the 10,000 veterans who call Williamson County home.

“We have very active veterans here,” he said. “We had about 250 veterans at the Veterans Day parade drive by. It warmed my heart to see how many people came through with little children. They made signs and wrote on their cars. The kids had no idea their parents were instructing them about patriotism.”

He said that having the Blue Star Memorial marker on the grounds of the county offices will be a reminder to all who walk by of the price of freedom.

The Blue Star first appeared in 1916 during World War I, when a father wanted to recognize and honor his sons’ service in the U.S. Armed Forces. He hung a flag with two blue stars — one for each son — on a window. Pam Dowd, National Garden Clubs chairman, said that the flag quickly caught on as other families did the same, “to show the price of freedom.”

The Department of Defense adopted the flag tradition in 1943.

During World War II, the flags reappeared in the windows of families remembering fathers and sons and even some daughters serving in the military. They hung flags of white cloth edged in red fabric with blue stars stitched on them to indicate active-duty family members. Again, flags had one star for each family member serving.

If a family member was killed in action, a gold star was stitched over the blue star giving it a thin border of blue. Later, silver stars were sown over the blue when a soldier was wounded in action or performed with “gallantry.”

New Jersey Council of Garden Clubs began the Blue Star Memorial markers as a landscaping project in 1945, when they planted 8,000 dogwood trees along a major state highway called Blue Star Drive. The trees were planted as a living memorial to veterans of World War II, Dowd said.

The National Garden Club adopted the program in 1946 and began the Blue Star highway system throughout the nation. Rather than planting trees, in 1947 they designed a marker — something more permanent — to place along highways.

Smaller markers, called byway markers, were created in 1981 for smaller roads, and in 1996, the National Garden Club adopted a memorial marker for parks, civic and community buildings and places.

“They all have the same wording,” Dowd said.

Gold Star families joined the program in 2015 and the Gold Star markers “were adopted honoring those who lost their lives in service to our country,” Dowd added.