A complaint filed by conservative nonprofit organization Moms for Liberty’s Williamson County chapter was rejected recently by the Tennessee Department of Education.

The group’s claim was that elements of critical race theory were being taught in the Williamson County Schools district through its K-5 curriculum Wit & Wisdom, created by Great Minds. The complaint was filed by Robin Steenman, the president of the Williamson County chapter of Moms for Liberty.

“Please note that in declining to investigate these claims, the department has not made a determination regarding the merits of these allegations,” Schwinn’s note went on to say. “We encourage you to work with the Williamson County School District to resolve the issues and concerns related to your complaint and ensure compliance with state law.”

The fine art of the dodge. pic.twitter.com/0WGQj178eT

Moms for Liberty’s complaint claimed that a Civil Rights module within the English language arts curriculum Wit & Wisdom was in violation of a new law passed by the Tennessee legislature in May. The law prohibits several concepts from being “included or promoted” in instructional materials, including the idea that one race or sex is “inherently superior” to another or is “inherently privileged, racist, sexist, or oppressive, whether consciously or unconsciously”; that an individual “bears responsibility for actions committed in the past by other members of the same race or sex”; that an individual should feel discomfort, guilt or other forms of “psychological distress solely because of the individual’s race or sex”; that Tennessee or the United States is “fundamentally or irredeemably racist or sexist” and more.

Moms for Liberty claims in its complaint that reading materials used in the Wit & Wisdom curriculum are not age appropriate, including texts in a nine-week second grade module titled “Civil Rights Heroes” that include “Separate is Never Equal” by Duncan Tonatiuh, “Martin Luther King, Jr. and the March on Washington” by Frances E. Ruffin, “Ruby Bridges Goes to School: My True Story” by Ruby Bridges, “The Story of Ruby Bridges” by Robert Coles and the “I Have a Dream” speech by Martin Luther King Jr.

A spokesperson from Great Minds said in an email to the Herald Tuesday that the books used in the curriculum are "time-tested and commonly used."

“Wit & Wisdom is a K-8 curriculum building knowledge, skills and character that features much-beloved, award-winning books from both contemporary and established authors, many of which parents will remember from their own childhoods," said Sydney Norton, chief marketing officer for Great Minds. "The books, which introduce kids to facts about U.S. history, the arts and sciences and values including strength, compassion and resilience, are chosen to match different ages and grade-levels.

"At a time when U.S. elementary reading scores need improvement and reading for fun is less common among kids, these time-tested and commonly used materials instill a love of the written word, build general knowledge and prepare young learners for future schooling and careers.

"Additionally, it's important to note that Wit & Wisdom is in full compliance with Tennessee state law.”

WCS Superintendent Jason Golden has denied that CRT is being taught at WCS.

See the full complaint issued by Moms for Liberty below. 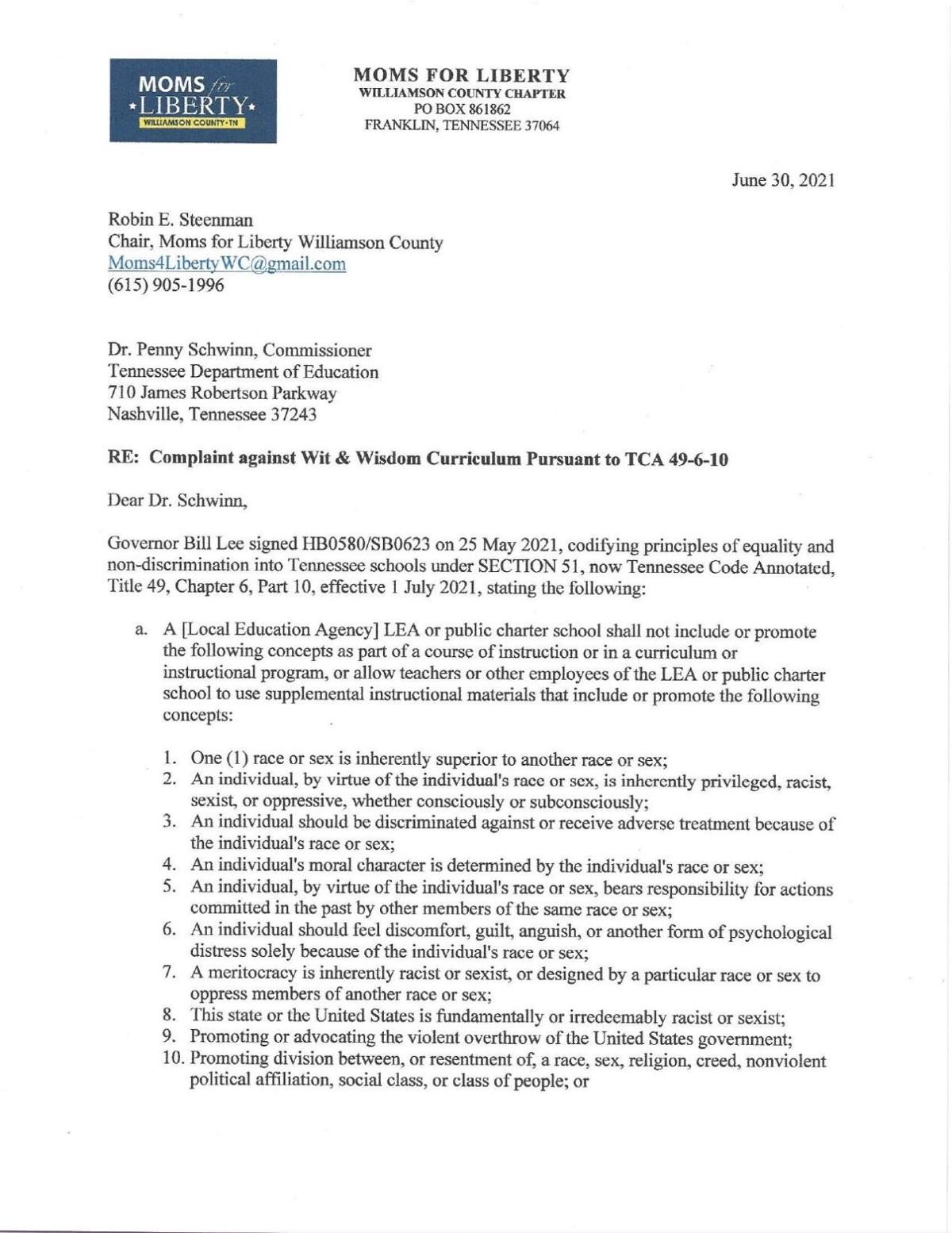