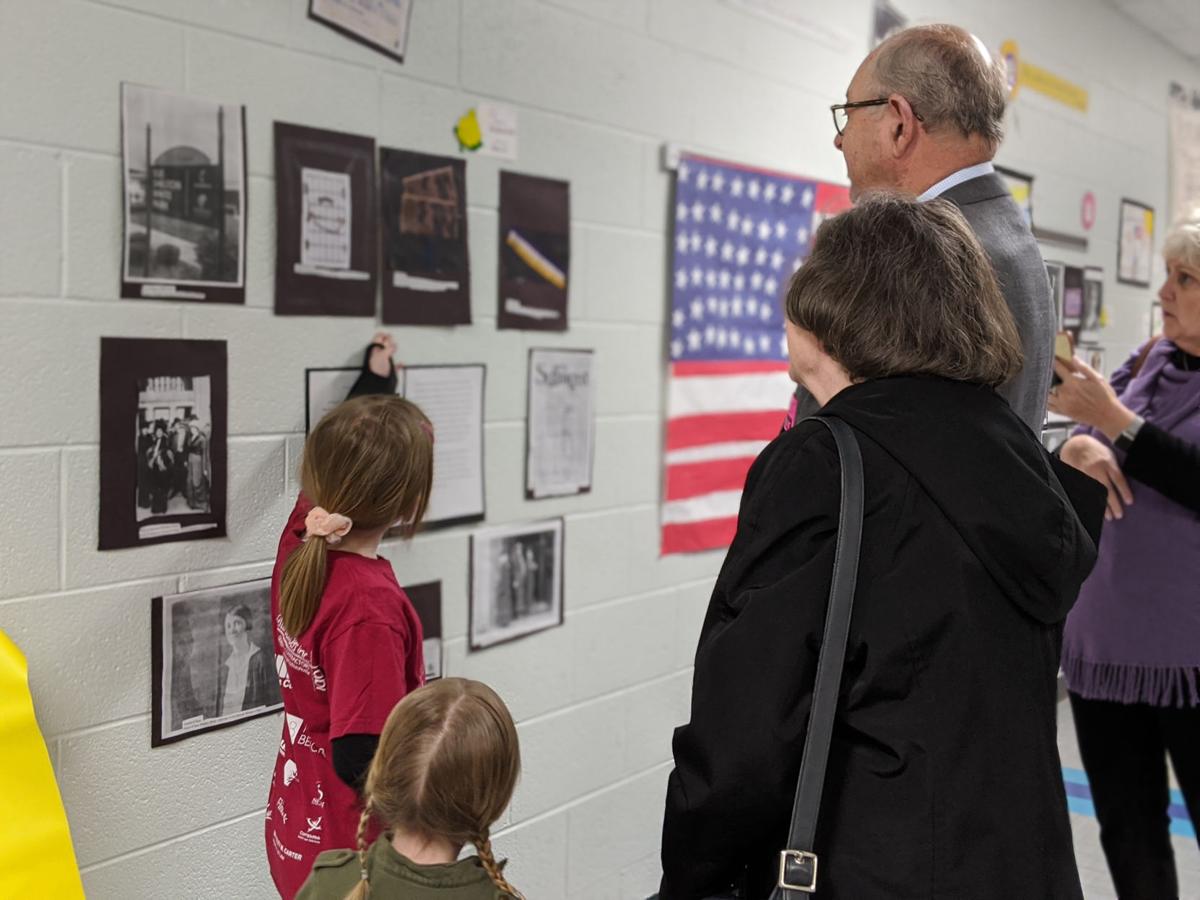 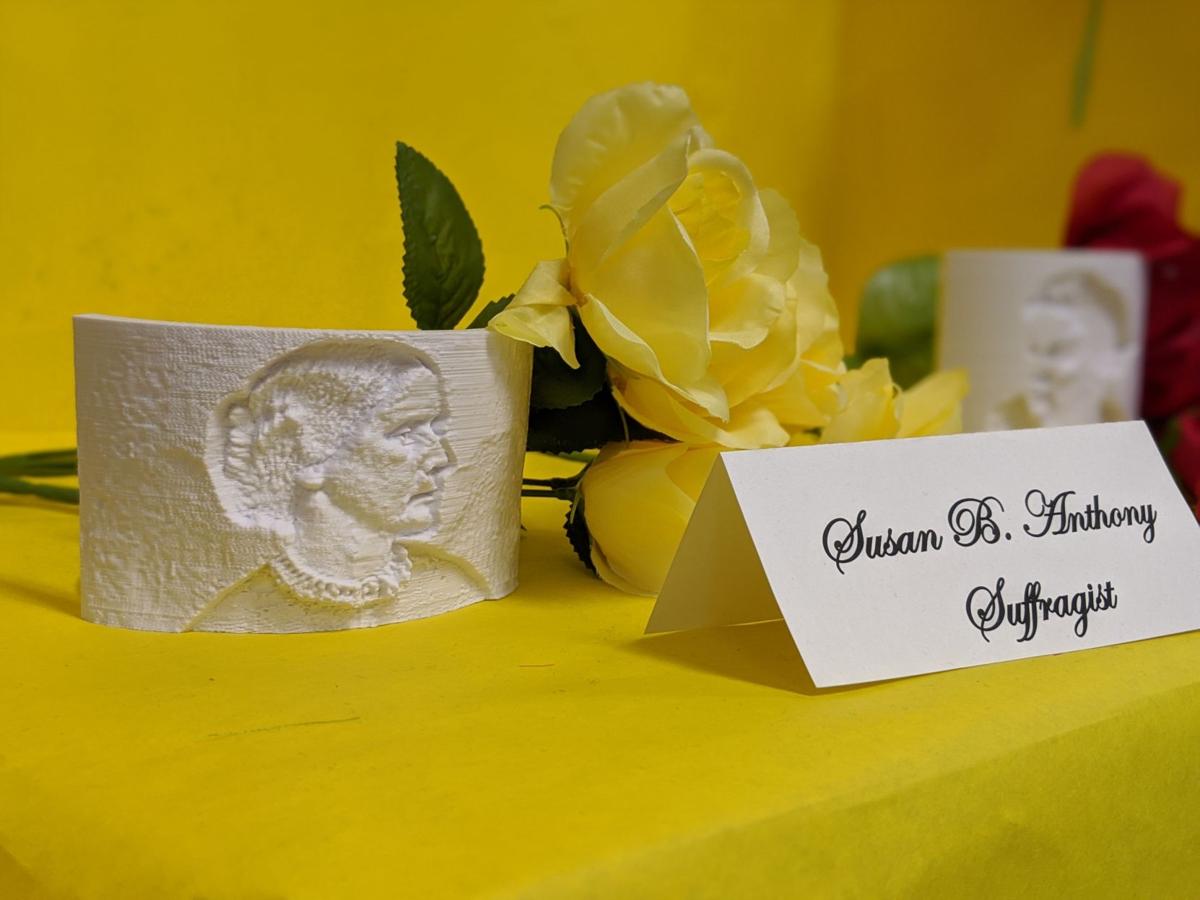 Students learned to use a 3D printer to create models of prominent figures in the suffragist movement. 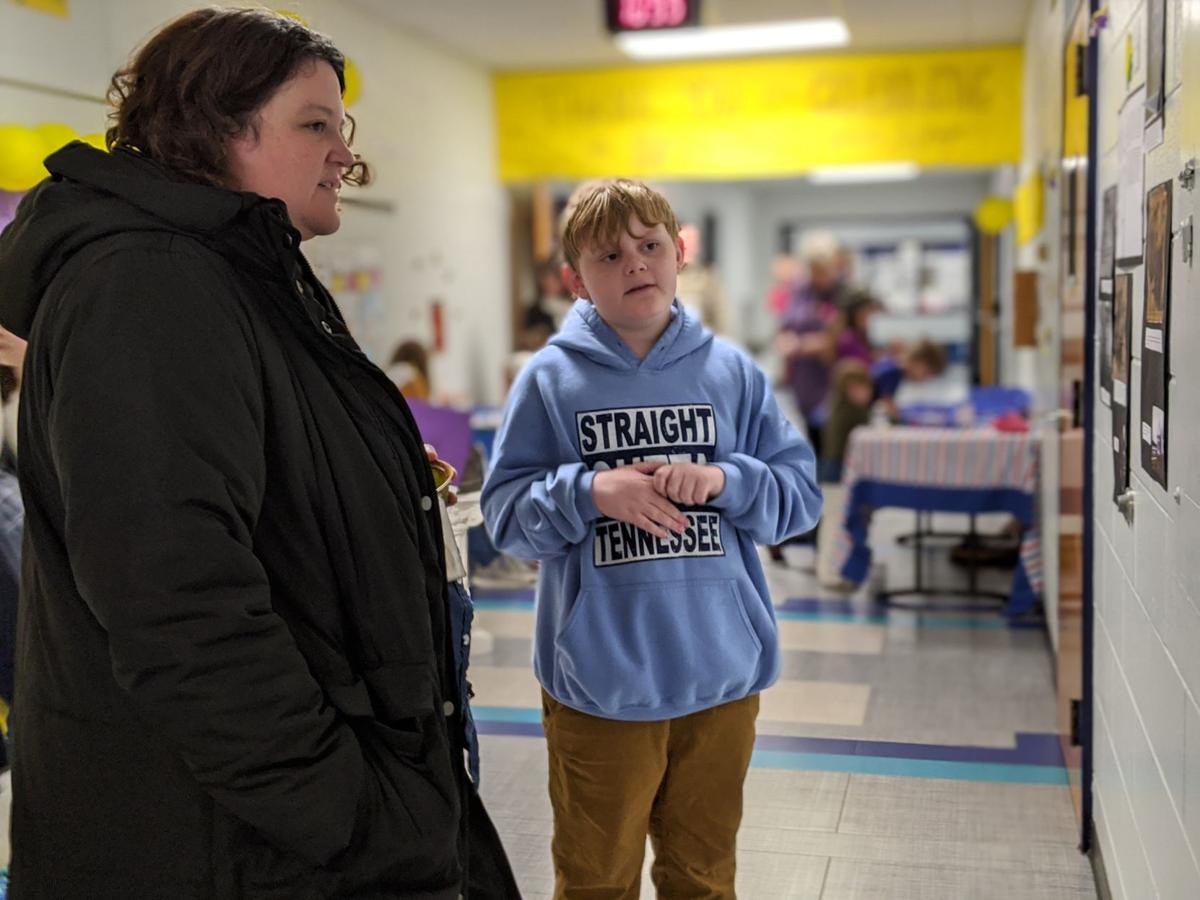 Fourth-grader Noah Bedwell shares the legacy of Juno Frankie Seay Pierce, who inspired him with her kindness and hard work. 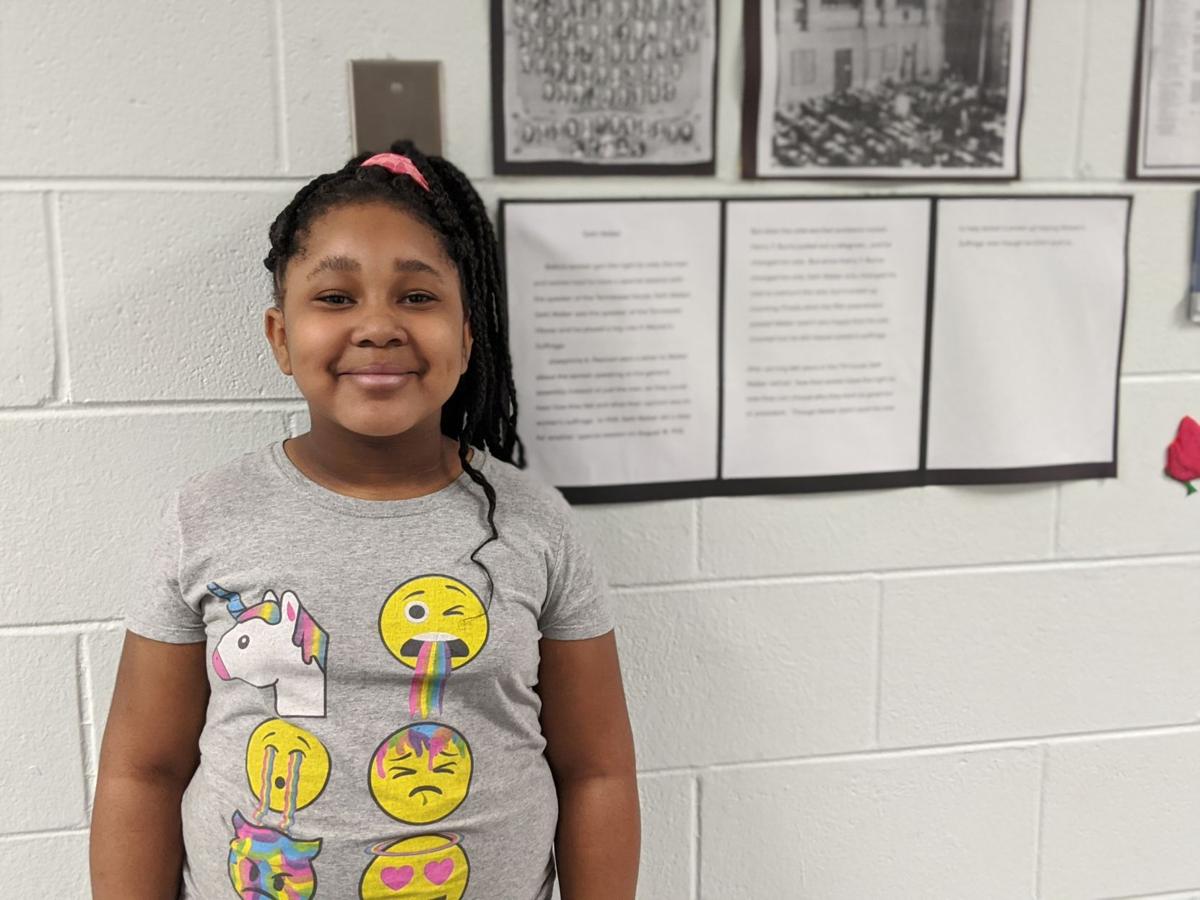 Reonna Wynn stands with her project on Seth Walker, an anti-suffragist. 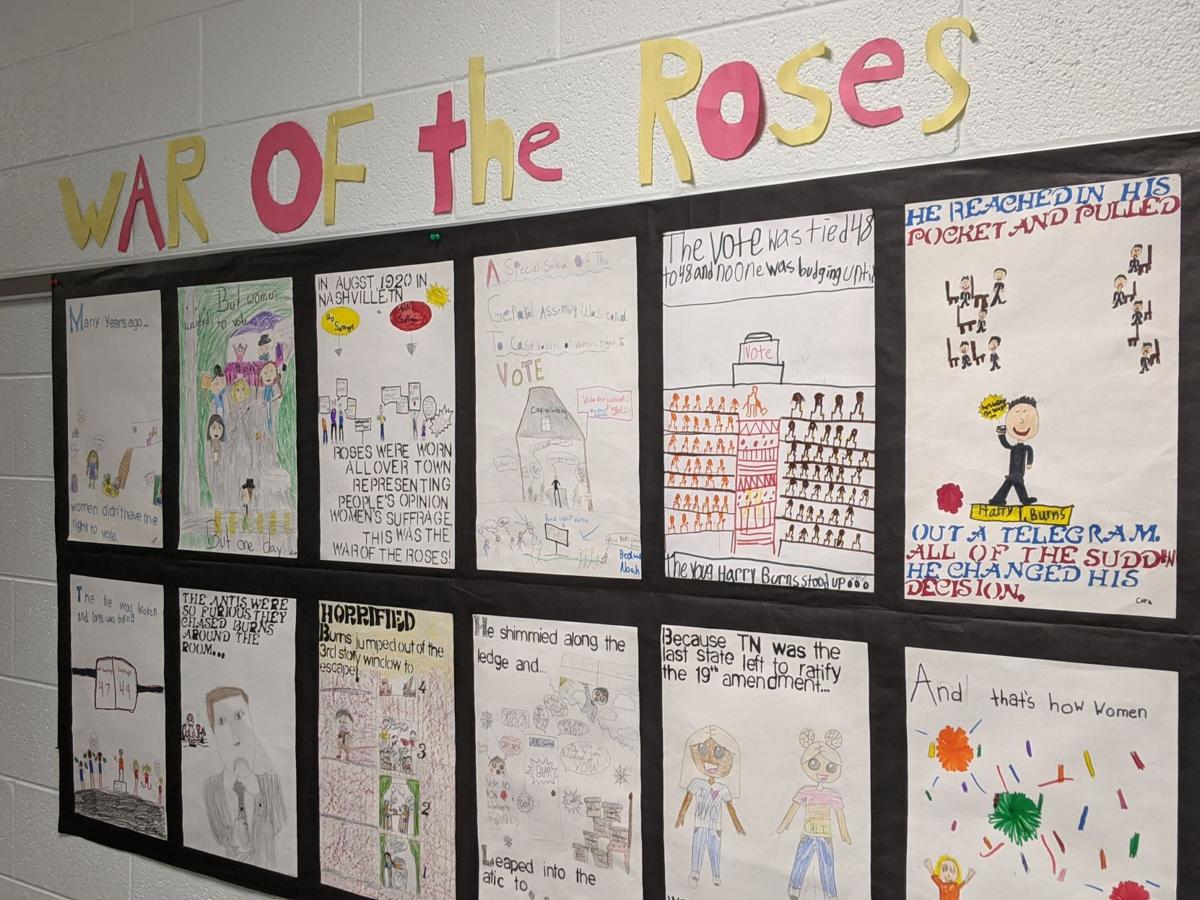 Students created a comic sharing the story of the War of the Roses in 1920. 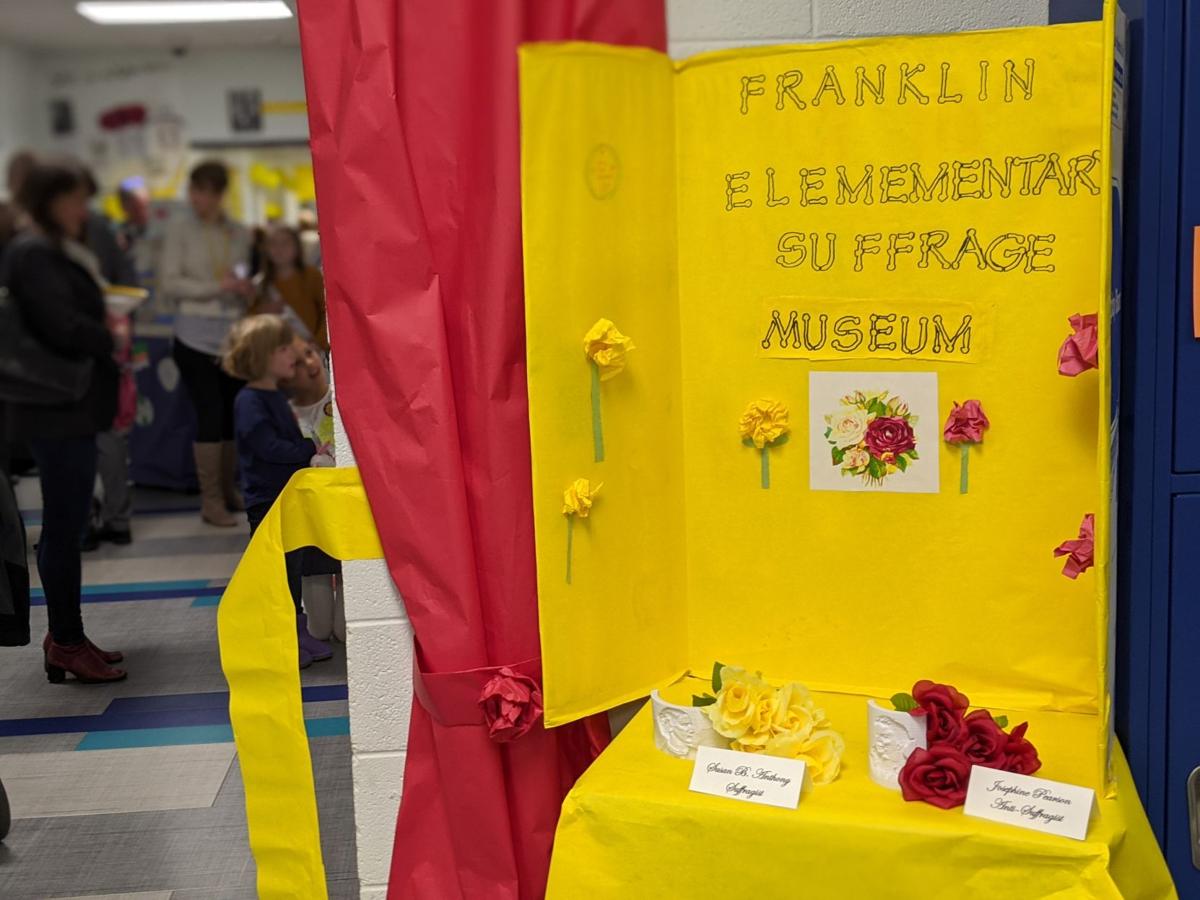 Students learned to use a 3D printer to create models of prominent figures in the suffragist movement.

Fourth-grader Noah Bedwell shares the legacy of Juno Frankie Seay Pierce, who inspired him with her kindness and hard work.

Reonna Wynn stands with her project on Seth Walker, an anti-suffragist.

Students created a comic sharing the story of the War of the Roses in 1920.

As Tennessee has been gearing up for the presidential primary election and celebrating the state’s centennial anniversary of women’s suffrage, some Franklin Elementary School students have been hard at work researching the influential people surrounding the fight for women’s right to vote.

Monday morning, students, teachers, parents and members of the community gathered in a school hallway to unveil the project created by the third- and fourth-grade accelerated learning program for the last few months: The Franklin Elementary Suffrage Museum.

Michelle Pieczura, accelerated learning teacher at Franklin Elementary, said her class engages in project-based learning, which is often driven by the students’ interest, and as the kids learned about women’s suffrage, their excitement piqued.

“So, I pulled a bunch of the names from [tnwoman100.com] and they drew a name, and we learned how to take notes and research information,” she said. “They learned how to create a biographical essay, so [in] each exhibit they created, they created their essay, and then they also used some different sites like the Tennessee State Archives and different primary source sites to find artifacts that would go with their person.”

The students also used their artistic skills to put together a comic of the War of the Roses in 1920, which refers to a time when Tennesseans wore different colored roses to convey their stance on women’s suffrage. They incorporated a bit of tech learning, as well, using 3D printers to create roses for the wall and models of prominent women from the suffrage movement, such as Susan B. Anthony.

“I really am inspired by her because she worked together with a lot of suffragists and cooperated with them, so that really taught me to cooperate with your own team and that you should listen to others and work together,” Shands said.

Shands’ mother, Katie, said her daughter carried her general excitement about life into this project.

“I think this is something they’ll remember the rest of their lives,” Katie Shands said.

As guests walked through the display, they remarked on how enthusiastic and informed the kids were.

“It’s one thing just to read it — this is what it is — but they’ve got passion about it,” Blair said.

Third-grader Reonna Wynn shared the story of Seth Walker, who voted against ratifying the 19th Amendment. She said she’s glad his vote “didn’t work” because now she can look forward to visiting the polls when she gets older.

“If [Walker’s vote] did work, we wouldn’t be able to have the right to vote now. We would just be in our house cooking and cleaning for other people, and now we actually have the right to go out and get a job and vote for the future president or governor,” she said.

Fourth-grader Noah Bedwell displayed his project on suffragist Juno Frankie Seay Pierce, who opened the Tennessee Vocational School for Colored Girls in 1923. Bedwell said he was inspired by her big heart and hard work, noting that she was a “very kind and respectful person.”

The 16 boys and girls in the class continued showing off their projects, excited for their equal opportunity to vote when they come of age.