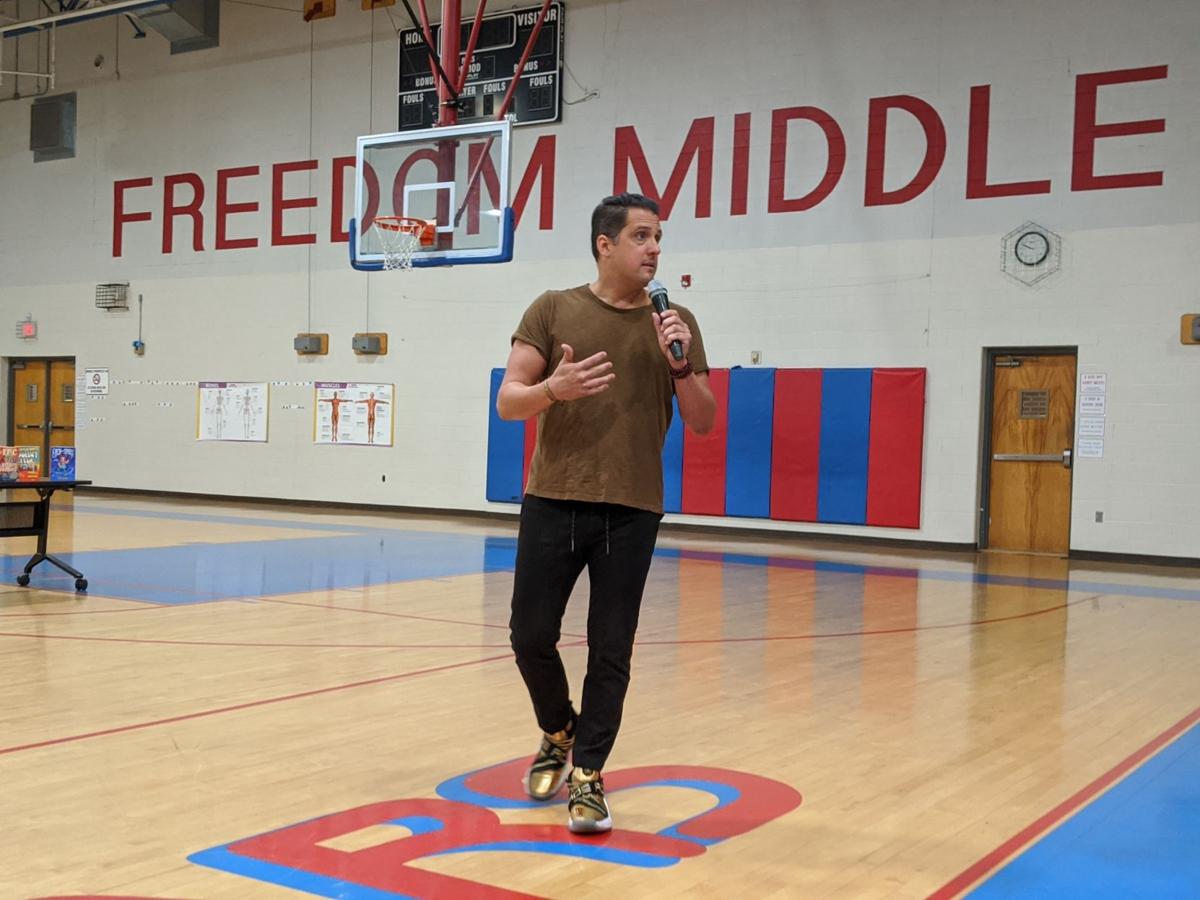 Pablo Cartaya shares stories about his childhood, teaching Freedom Middle School students about pride in one’s culture, foreshadowing and connecting with others. 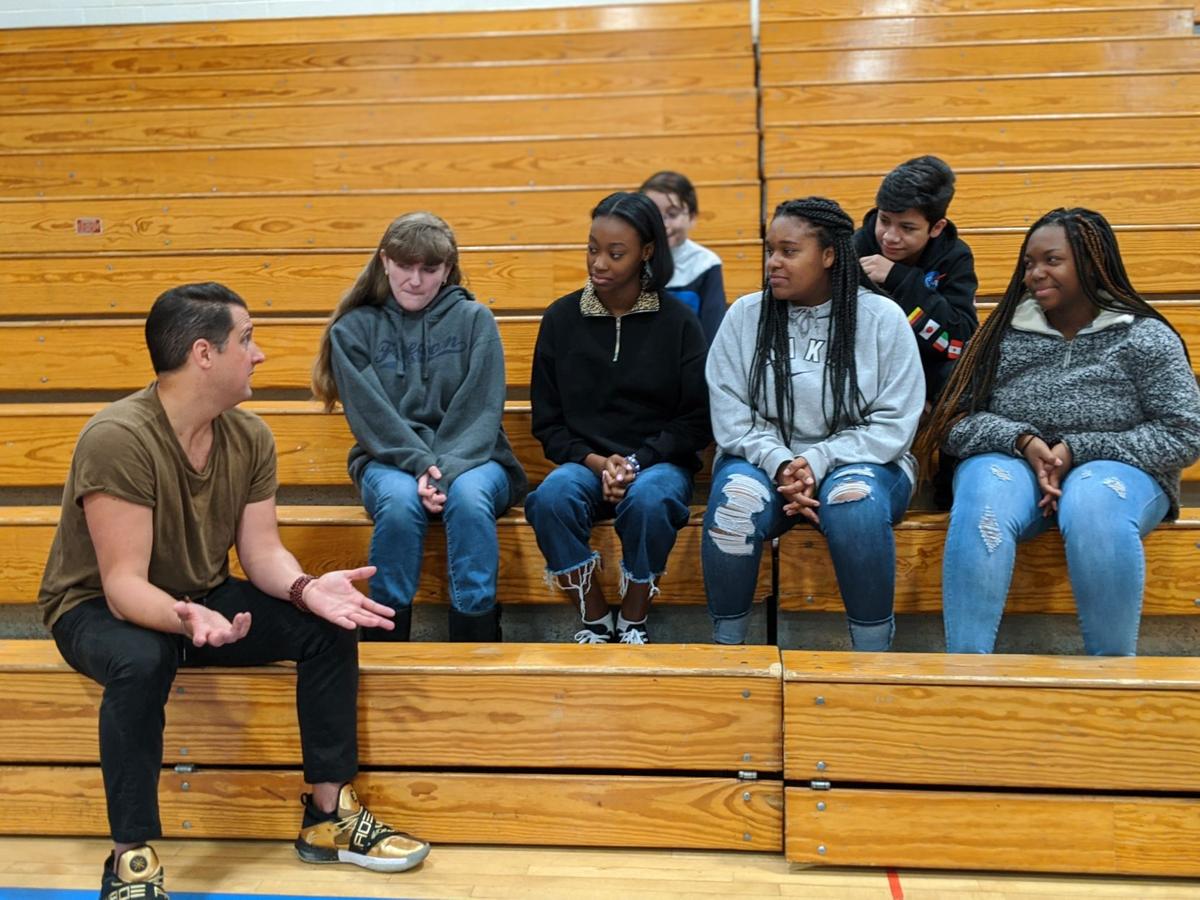 Pablo Cartaya hangs back with a few students to answer questions and talk one-on-one about writing and being proud of your background.

Pablo Cartaya shares stories about his childhood, teaching Freedom Middle School students about pride in one’s culture, foreshadowing and connecting with others.

Pablo Cartaya hangs back with a few students to answer questions and talk one-on-one about writing and being proud of your background.

The author was there to discuss the book in which the students had immersed themselves every fifth period for the past two months.

After two years off, Freedom’s schoolwide literacy program kicked back into gear with one of Cartaya’s books, “The Epic Fail of Arturo Zamora.” Since October, the students have been reading the story in class, discussing the themes and applications to their own lives and communities.

“We chose the book because it represents community and love for family and that your community can also be your family,” said Tequila Cornelious, the school’s instructional literacy coach. “One important topic in the book is gentrification, and we were able to make connections to that with what is happening in Franklin. Additionally, the Cuban culture represented throughout the book is very rich, and it gave us all an opportunity to celebrate and learn about another culture.”

Cartaya told the students that each of his four novels center on three themes: family, community and culture. As a Cuban-American, he told stories about his family’s culture and his life as a kid, sharing how certain foods and music remind him of home. Some students shared details about their favorite foods and how they remind them of their families as well.

Growing up in New York with a Cuban family, Cartaya said that he didn’t learn English until he went to school, where he wasn’t necessarily encouraged to speak his first language of Spanish. On his first day, his teacher decided she would call him Paul, the English version of his name.

While he maintained his Spanish vocabulary through conversations at home with his abuela (grandmother), she died when he was 8 years old, leaving him with fewer outlets for the Latino piece of his identity.

In his early adulthood, as he pursued an acting career, he was told by a casting director that his name was distracting because he didn’t look Mexican. Indeed, that’s because he was not. But because the man told him, “You should change your name so you can blend in better,” saying he might have hired him on that condition, Cartaya obliged.

But when his father found out that he had changed his first name, he was visibly upset. Cartaya asked his mother why. She retold the story he had heard many times about his father, but this time in more detail — how he took issue with the communist regime of Fidel Castro in Cuba, how he was a political prisoner, how he left his family, including his beloved grandfather, behind when he was sent to Georgia after his release.

“I’ll give you one guess what his grandfather’s name was,” Cartaya said.

Cartaya changed his name back to Pablo, and today, he preaches a message of owning your life story, having confidence in your culture, not being ashamed of recognizing your background as part of your identity.

He said that his exploration of culture in his books is meant to act as a unifying force, promoting confidence in not only those who share a similar culture to his but in those from any background.

“I’m not going for a political sledgehammer,” he said. “I’m just going, ‘Look, we’re all human beings on this earth — God’s children. Some of us are just different colors and different places. We’re all here, and we all can be proud of where we’re from and who we are.”

As the students have gone through his book in the classroom, they have been discussing the themes of gentrification in the story, taking the opportunity to learn the term and how it could apply to where they live. Cornelious said the kids started to draw connections between the construction of Pipo Place in the book and The Harpeth, the almost-finished hotel downtown.

“The community (in the book) was very similar to Franklin in the sense that it had a rich history to it, but yet this land developer was sweeping through town, and he wanted to make everything more exclusive and high-class, and there was this struggle between, ‘OK, but this is a great community. This is where our family is. This is where our family’s restaurant is,’” Cornelious said.

Adam Demonbreun, seventh-grade assistant principal at Freedom, said the book gave the kids the opportunity to discuss difficult topics, some that can be considered taboo, with one another.

“I think (Cartaya) brought up topics that … can sometimes be considered not PC,” he said. “But I love the fact that all of our kids were engaged. I think the best thing about our school is the diversity, and for them to see from somebody else’s perspective is great for all of our kids.”

The Freedom Middle Schoolwide Literacy Council is hoping to select one book per year to continue this dialogue on important topics between students.