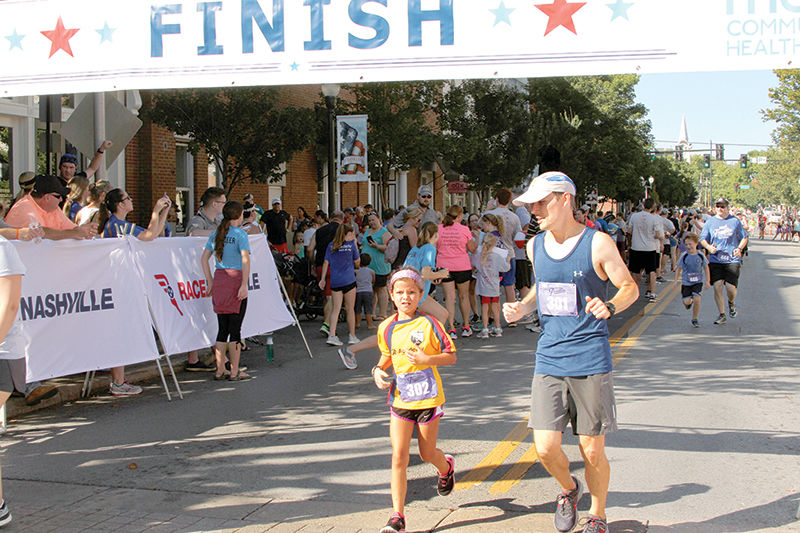 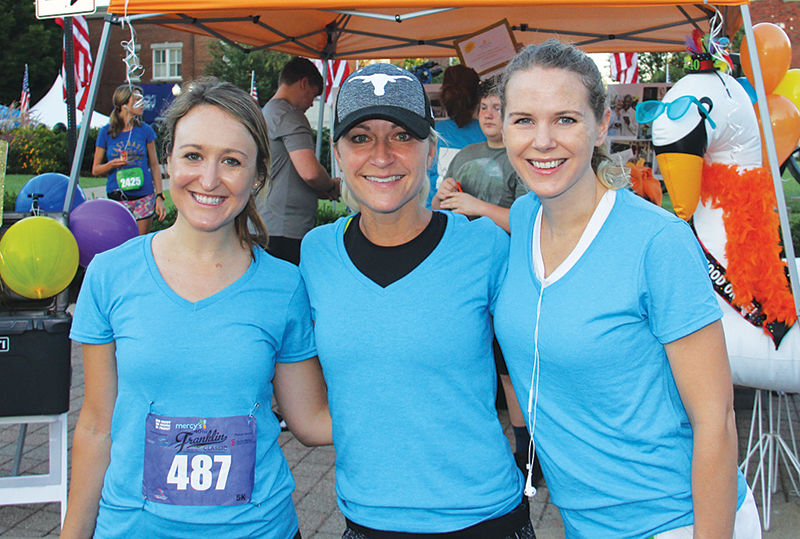 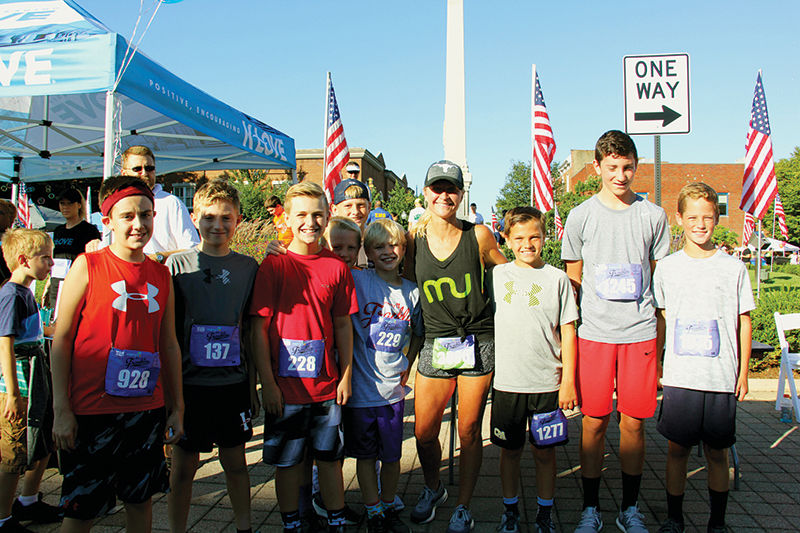 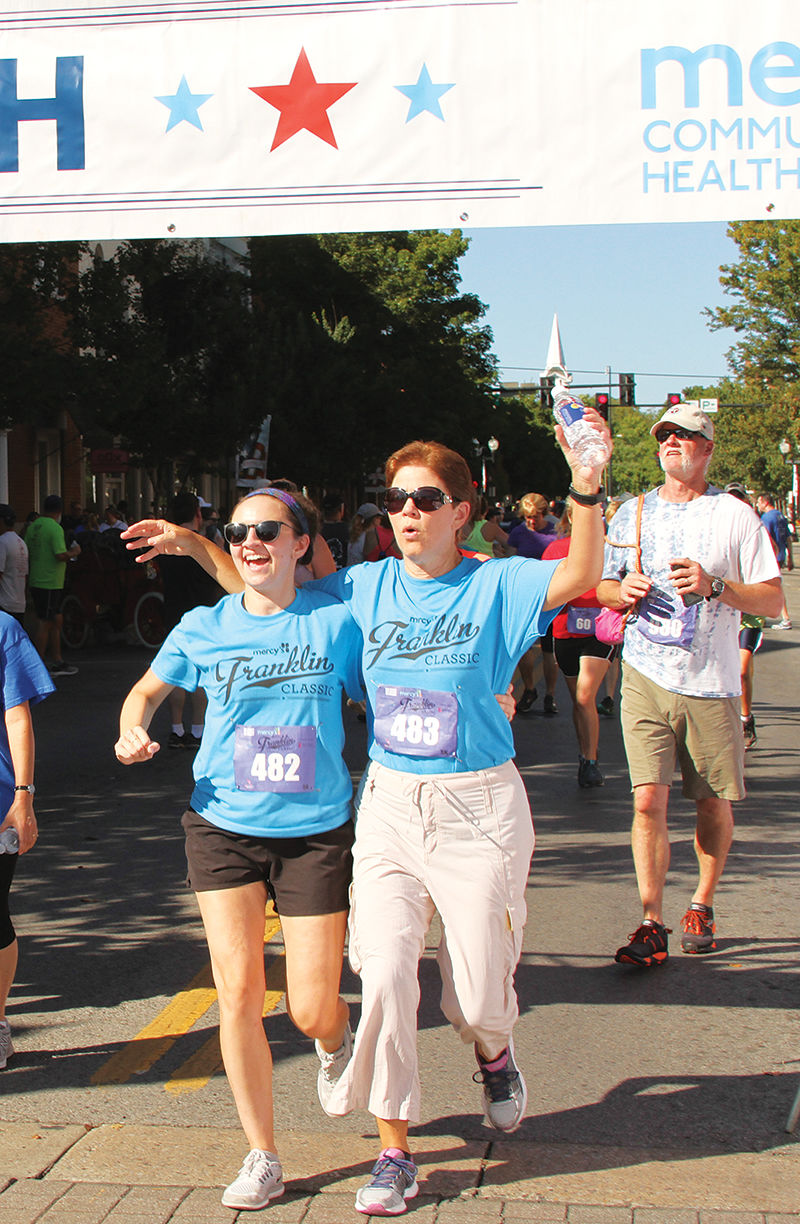 Friends Michelle McMillen and Candi Potts cross the 5K finish line together during the 2018 Franklin Classic. 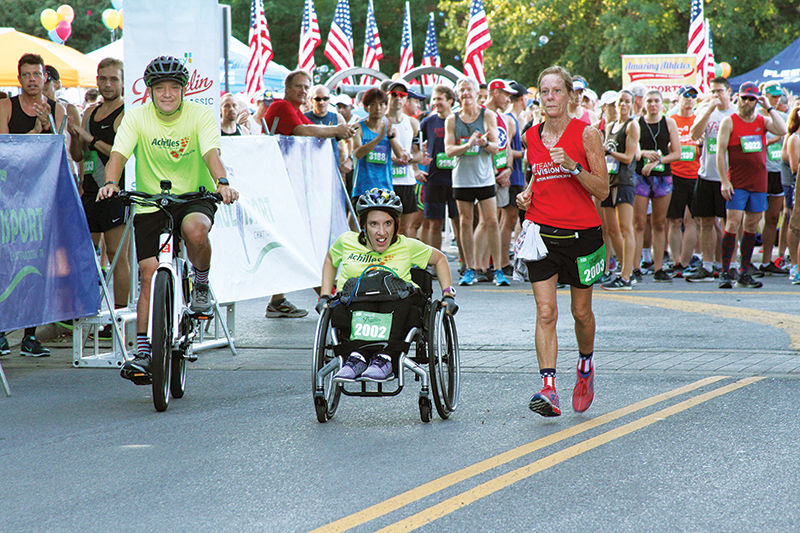 Amy Saffell takes off in the 10K wheelchair division. Her bicycle guide is Jim Troutt and her running guide is Amy Harris. The rest of the 10K runners started a couple minutes later. Amy crossed the finish line in 1:18:12 last year.

Friends Michelle McMillen and Candi Potts cross the 5K finish line together during the 2018 Franklin Classic.

Amy Saffell takes off in the 10K wheelchair division. Her bicycle guide is Jim Troutt and her running guide is Amy Harris. The rest of the 10K runners started a couple minutes later. Amy crossed the finish line in 1:18:12 last year.

Mercy Community Healthcare’s 41st Franklin Classic is already off to a good start, with more than 2,000 runners and walkers expected to gather at the starting line for the 5K walk/ run, 10K run or the 1K kids fun run, all set for early Labor Day morning.

Among the numbers of participants will be Mandy Oakes and her two sons, 10-year-old Hudson, who will be running in the 10K for the first time, and 13-year-old Austin, who will stick with the 5K. Franklin native Ted Wilson, age 80, will also be on the 5K starting line.

Oakes started running during her college years and now shares her love of running with her young sons.

Wilson, meanwhile, says that running turned his life around in high school.

“I smoked in high school from the eighth to the 12th grade,” Wilson said. “It was just a few cigarettes a day, but I was also a bad boy, drinking beer in high school.”

That was until his senior year, when a Franklin High School coach saw something special in the boy and encouraged him to join the school’s track team. With a little training, Wilson performed well enough to become the team co-captain.

All through elementary, middle and high school in Dallas, Oakes danced.  “I loved the cardio element of dance,” she said.

But dance classes weren’t offered at Rhodes College in Memphis. She tried cheerleading.

“That wasn’t enough,” she said.

Then she tried running on campus and found the cardio workout she missed. Soon running became an outlet, a means to get involved in the community and a lifelong passion.

When she joined a running group in Memphis, her endurance increased enough for her to run marathons. That endurance helped greatly during the years she lived in Chattanooga, where she ran the hills in and around the city.

“Even the (Nashville) Rock ’n’ Roll Marathon has nothing on Chattanooga,” she said. “Some of those hills are almost straight up.”

Wilson rediscovered running when he was 30. He went by the school track one day and decided to relive his youth. He ran the track.

He moved to marathons after reading about a couple of local men who ran the Boston Marathon. He contacted the men and was invited to train with them with the goal of running a marathon. In total, he ran 15 marathons.

In 1978, Wilson was one of the several hundred who ran the first Franklin Classic; at that time it was called the CPS 10K Cancer Run.

Oakes arrived in Franklin in 2004 and included the Franklin Classic in her running repertoire. She continued to run while she was pregnant with both boys. After Austin was born, she  took him along on her daily runs, pushing a jogging stroller.

“He enjoyed the movement,” she said.

She even pushed him in various running meets, including the Franklin Classic. Oakes didn’t slow down three years later, when Hudson came along. She simply got a double jogging stroller.

“One race they made me start in the back,” she said. “I pushed all the way to the front and won the race pushing a double jogging stroller.”

Not surprising, the boys developed an interest in running. They ran the 1K kids fun run at the Franklin Classic. By the time they were 6 or 7, they were ready to enter the 5K race with mom.

“I think they see that I love it, so it’s not a chore,” she said. “I guess I painted a picture of (running) being normal. I love (running) so much and get so much joy out of it.”