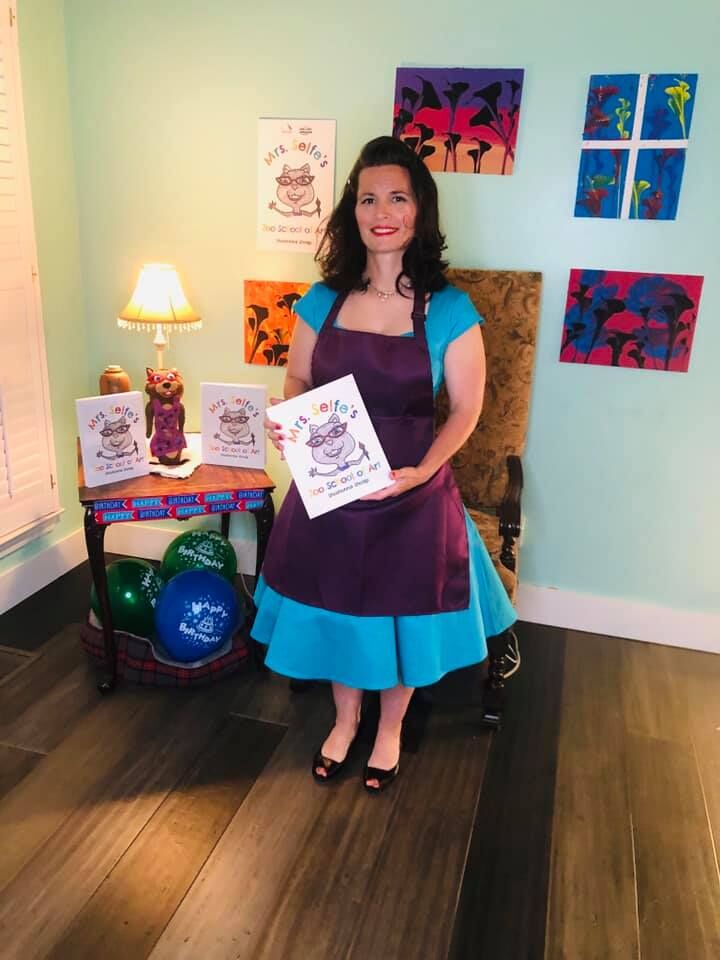 Shoshonna Shoap, a school resource officer at Pearre Creek Elementary School, wrote a children’s book about the ways special-education students at the school have inspired her. 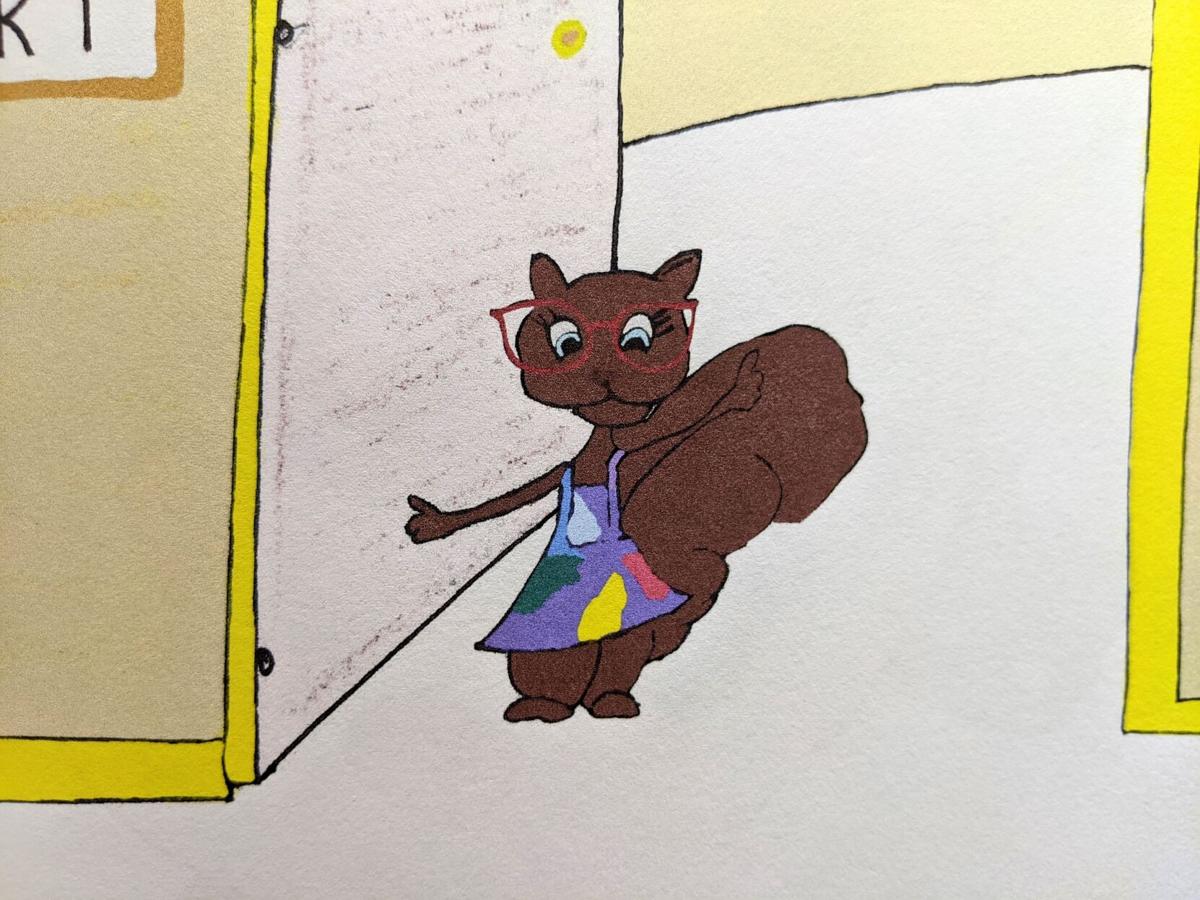 In “Mrs. Selfe’s Zoo School of Art,” a squirrel named Mrs. Selfe teaches art and encourages her students to find unique solutions in overcoming their individual obstacles. One quarter of the proceeds from the sale of the book goes toward the special-education program at Pearre Creek Elementary.

Shoshonna Shoap, a school resource officer at Pearre Creek Elementary School, wrote a children’s book about the ways special-education students at the school have inspired her.

In “Mrs. Selfe’s Zoo School of Art,” a squirrel named Mrs. Selfe teaches art and encourages her students to find unique solutions in overcoming their individual obstacles. One quarter of the proceeds from the sale of the book goes toward the special-education program at Pearre Creek Elementary.

School resource officers are often inspirational figures in children’s lives, but one local SRO wrote a children’s book to share the ways the students at her school inspire her.

“Sometimes they can teach you more than we can teach them,” said Shoshonna Shoap about the students at Pearre Creek Elementary School in Franklin.

Shoap is an SRO at Pearre Creek. She said that she has had a desire to protect others since her youth.

In college, she initially studied to become a special-education teacher. However, after marrying a man in law enforcement, she changed courses and found her true calling.

“Being an SRO is kind of what I’ve always wanted to do and didn’t know I wanted to do it,” she said, adding that the job didn’t come to mind for her originally because it wasn’t as prevalent when she was a kid. “This is a perfect blend of me being able to make a difference in the foundation level of children while also protecting them and honoring the badge I wear.”

Shoap’s husband, Chris, said that while his wife has worked at different schools in the past, she found her place at Pearre Creek.

“When you really find where you’re supposed to be, you just kind of know. And she’s where she’s supposed to be,” he said. “You just know, and her connection with the kids and stuff is great.”

Shoap said that even though she didn’t become a special-ed teacher, she still has a special love for special-ed students. After developing relationships with many students at Pearre Creek, she decided to write a book about and for them. She is even giving 25% of the proceeds from the sale of the book to the school’s special-ed program.

“I wanted to give them the spotlight because they prove that no matter what the obstacle is, no matter what they’re trying to overcome, they’re still able to find success,” she said. “It may be their version of success, but it’s still success, and I think that’s something that’s worthwhile in celebrating.”

This year, she released “Mrs. Selfe’s Zoo School of Art,” the main character of which is based on a real art teacher who inspired Shoap with her message that there’s no wrong way to do art — anyone can do it.

Shoap decided to make all the book’s characters different animals. Because Mrs. Selfe always had a lot of energy, Shoap decided her character would be a squirrel.

In the picture book, Mrs. Selfe tells her class of animals that their art project of the day is to paint, but each animal — an elephant, a tiger, a peacock and a hippopotamus — has a reason for why they believe they can’t paint. One by one, the students find creative solutions to the problem and by the end of the story, they’re all painting.

“I wanted to do animals, something that kids could relate to and kids could see different things in them,” she said.

She has a character with freckles, one that wears glasses and animals of different sizes.

“It’s things that kids could say, ‘Oh, that makes me different,’ but then they still succeed.”

Not only do the students in the book have to find creative solutions, but even Mrs. Selfe, the squirrel teacher, has to climb up on an easel, stool and table throughout the story to help her students, who are bigger animals than her.

“It’s a message that, I think, applies to anybody. I mean, all of us have those things — ‘Oh, I wish I was taller’ or whatever. We all have these things that we perceive as hindrances,” she said. “Sometimes it’s not that we need to change something, it’s that we need to look at it a different way.”

Shoap said that as she has read the book to students, they sometimes figure out solutions to the animals’ obstacles before she gets to that point in the story.

“It was neat seeing the lightbulb go off for those kids,” she said. “I’m reading it, and Tristan (the tiger) is like, ‘I have sharp claws. I can’t (hold a paint brush).’ And then I hear this little kid whisper, ‘He could use his tail.’”

Plus, Shoap also hid little pawprints throughout the book’s illustrations as a nod to her Pearre Creek Panthers.

Shoap said that she wants her book to teach problem solving and empower those who are different, but she also wants it to teach empathy and reflect the ways the special-ed students she has bonded with have inspired her.

“I think they have a lot more courage and strength than maybe the rest of the world does,” she said. “For example, there’s a small little boy that I got to be really close with, and he’ll never be able to drive a car, he can’t even have complete sentences. He’s extremely high needs., but … he’s just pure joy, pure love. When he’s happy, he is just completely happy, and I think that kind of ability to love openly, to have that pure joy is something that we all should have.”

Shoap is already in the process of finalizing her second book, “Tristan Tackles True Friendship.” She said that each character in “Mrs. Selfe’s Zoo School of Art” will have their own book, which will teach one of Pearre Creek’s five “be” statements. Her first book is centered on “be your best.” The next book’s message will focus on how to “be a good friend.”

She hopes her book encourages readers to try new things, even if they don’t think they can do it.

“You never know what you’re capable of until you do,” she said.