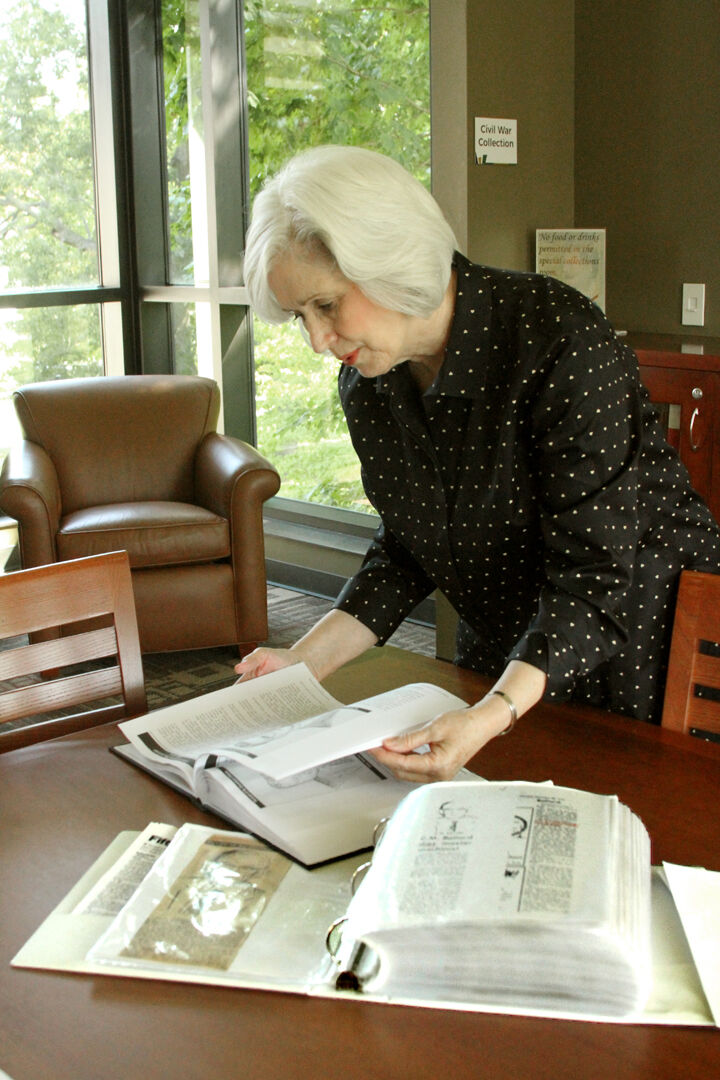 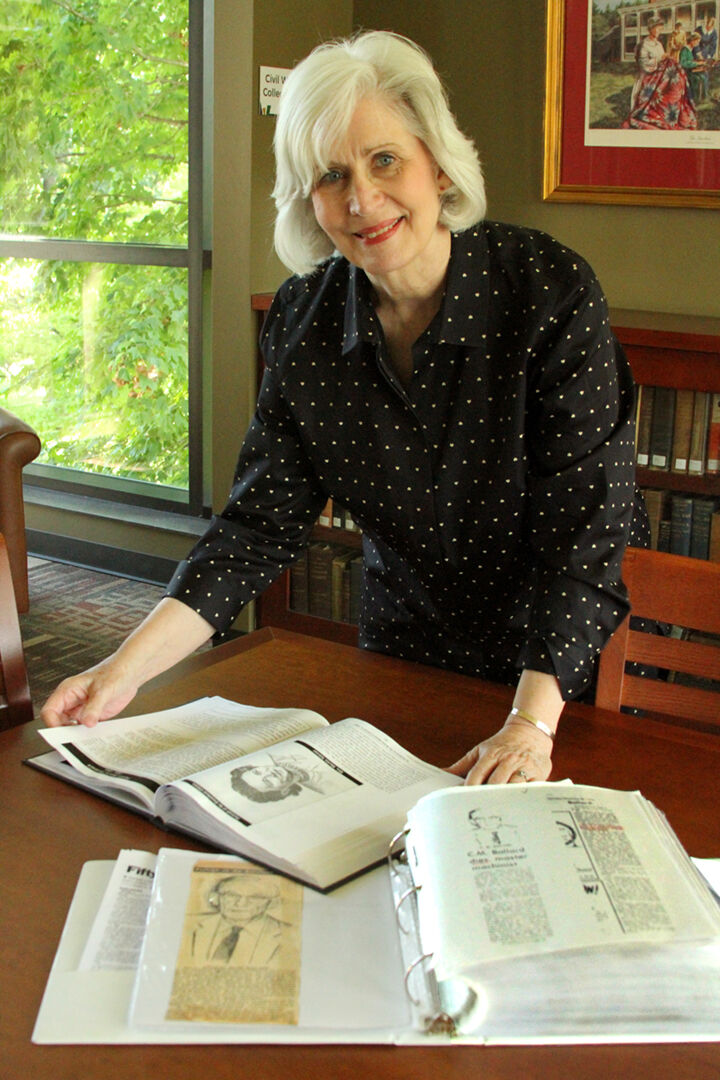 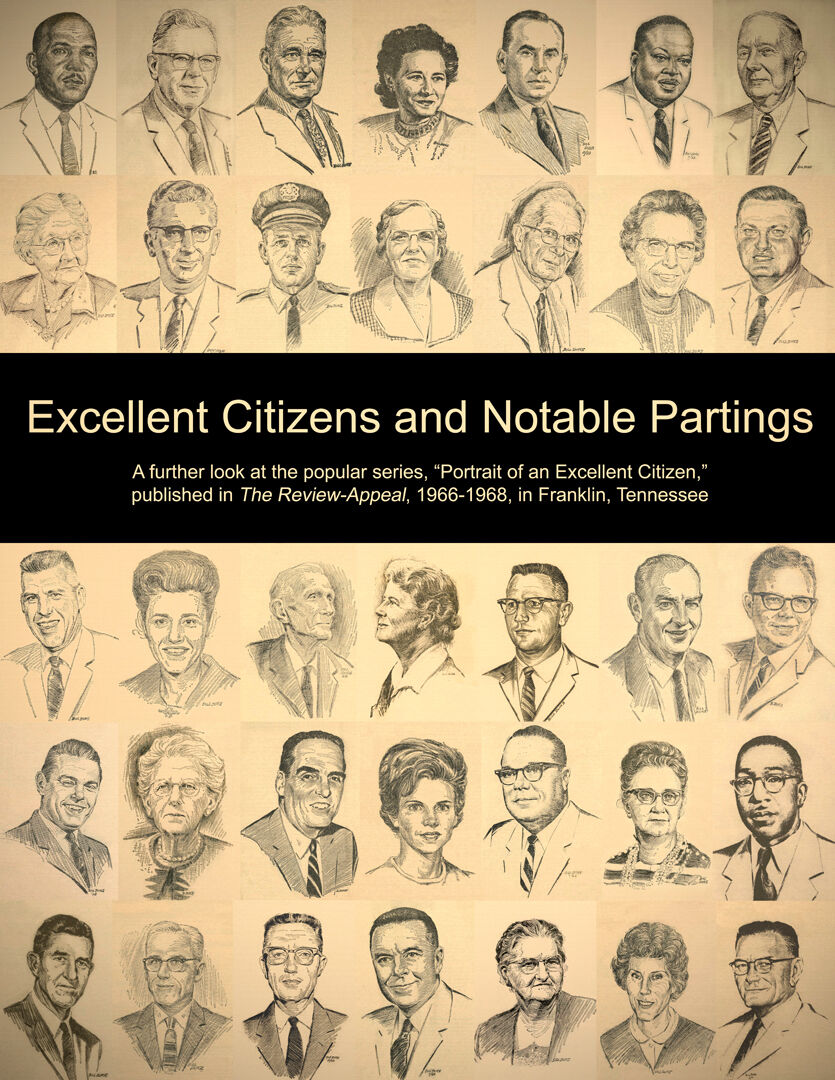 Excellent Citizens and Notable Partings is a further look at the popular series, "Portrait of an Excellent Citizen," published in the Review-Appeal, 1966-1968, in Franklin.

Excellent Citizens and Notable Partings is a further look at the popular series, "Portrait of an Excellent Citizen," published in the Review-Appeal, 1966-1968, in Franklin.

While digging around old boxes in the library’s manuscript room one day a couple of years ago, Marcia Fraser, director of special collections for the Williamson County Library, and Ashleigh Florida, her assistant, discovered a box of newspaper clippings from The Review-Appeal, a former local newspaper.

They instantly recognized the value of their discovery.

The clippings were from a series of portraits and profiles of Franklin and Williamson County residents. The series, “Portrait of an Excellent Citizen,” ran in The Review-Appeal from 1966 to 1968.

After the discovery, the profiles became the basis of the library’s latest collectable publication, “Excellent Citizens and Notable Partings.”

The book expands on the clippings to provide a broader, clearer view of the community and the people who envisioned more and made it happen. It was compiled and edited by Fraser and Florida as a resource for genealogy buffs and those interested in the county’s history.

Each week from 1966 to1968 the newspaper featured a noteworthy county resident in a brief profile with a pencil drawing by Bill Duke, a Nashville artist who also did illustrations for The Tennessean. In all, 143 people — preachers, doctors, lawyers, political leaders, business owners and some extraordinary regular folk — were recognized in the series and are found in the book.

“When (The Review-Appeal editors) started the series, they didn’t include an introduction, and when it stopped, it just stopped,” Fraser said. “We asked around about the series. No one knows why they did it.”

The Review-Appeal was sold in 2004 and the publication ceased in March 2014.

After their discovery, Fraser and Florida pondered ways to make the information they found easily accessible to the public. At the same time, Dolores Greenwald, the library’s director, decided it was time for the library to publish another collector’s book.

Fraser said that they created a map of Williamson County’s towns and communities and included period advertisements “for color and to underscore the businesses at that time.”

“We focused on getting vital information on the pages,” she added. “We wanted (the book) to be a place people can use to find vital information and a little about the life of that generation. These were people out doing things. They were involved in the community.”

The obituaries were added to provide information about where the person grew up, their family members and friends. Some of those profiled in the series were born and raised in Williamson County while others came from elsewhere, settled here and made this home.

Other additions include local statistics from the years 1966-68 and quotes from former Review-Appeal contributors and local writers such as Derry Carlisle, Nat Osborne Jr., Jane Bowman Owen, Bill Peach and Leonard Isaacs.

With subject and name indexes in the back of the book, researchers can easily find whatever they may be seeking and more.

“When we started indexing, we realized Myron Keith (longtime pastor at Fourth Avenue Church of Christ) did more funerals than anyone and Bob Sewell (Sewell Electric Co.) was the most sought-after pall bearer,” Fraser said. “He had a lot of friends.”

Lois Crowley was an extension agent for the Williamson County Agricultural Extension Service. With support from the Del Rio Home Demonstration Club, she was instrumental in developing the county library’s first branch library, in Fairview.

Col. Rudolph Duncan enlisted in the U.S. Navy in 1914 at the age of 19. He served in three wars — in the Navy as radio telegrapher in the Mexican-American conflict and World War I and in the U.S. Army as a signal officer during World War II and later an electrical engineer. The Nebraska native was president of the Franklin Chamber of Commerce and executive secretary of the Williamson County Chamber of Commerce.

Lewis Morgan “Hot” Hood was a veteran of the Korean War, a Franklin firefighter and later Franklin police chief. According to friends, he got his nickname “because he had a quick temper.”

Franklin Mayor Asa Jewell was a restaurateur in New York City before moving to Franklin to market horses and work as an accountant with his brothers at the Jewell Tobacco Warehouses along Columbia Avenue. According to a memoir his daughter Margaret Jewell Gordon provided, during his tenure as mayor from 1961 to 1969, Jewell led Franklin’s transition out of segregation by encouraging businesses to open job opportunities, bringing in manufacturing companies and encouraging the elimination of segregated bathrooms and drinking fountains.

Fraser says that “Excellent Citizens and Notable Partings” is an interesting book to read because it brings people to life.

“They were a lot of ordinary people doing their job, but what they did was important. Before you got here, there were people who worked to make this a livable community.”

For the historian, the book provides lots of local information. For those who lived here in the 1960s, it may jog a lot of memories. For those new to the area, it will provide a clearer understanding of Franklin and Williamson County and of some of the names of bridges, schools, streets and local landmarks.

“It was a fun project to do,” Fraser said. “It was fun to explore their lives and bring them to light.”

“Excellent Citizens and Notable Partings” is being sold for $25 and pre-orders will be accepted until Oct. 2 for an early November delivery.

Proceeds from the book go to Friends of the Library.

For answers to questions about the book or reserving a copy of the book call Fraser at 615-595-1246.