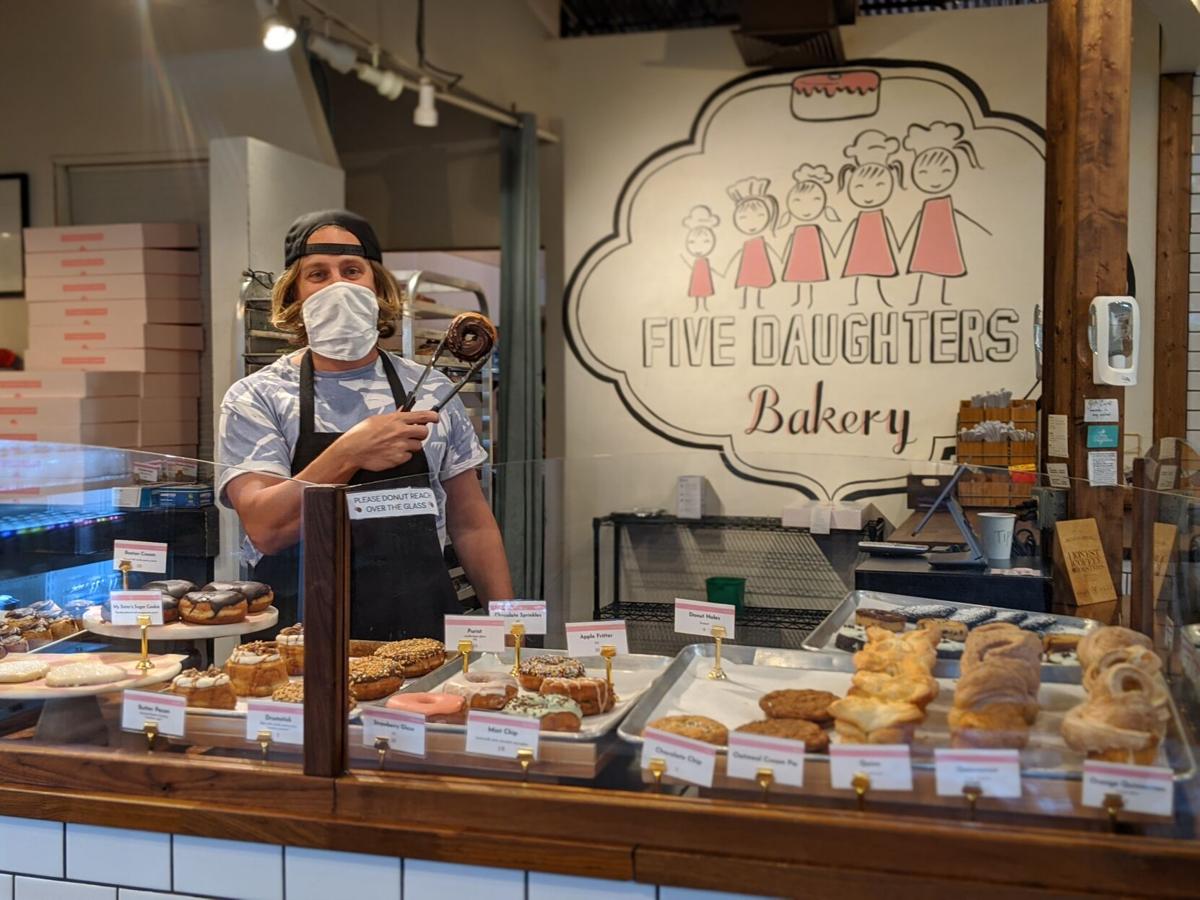 Isaac Meek opened Five Daughters Bakery out of his own kitchen in 2015 and now has a spot in The Factory at Franklin, three shops in Nashville and two in Atlanta, Georgia. 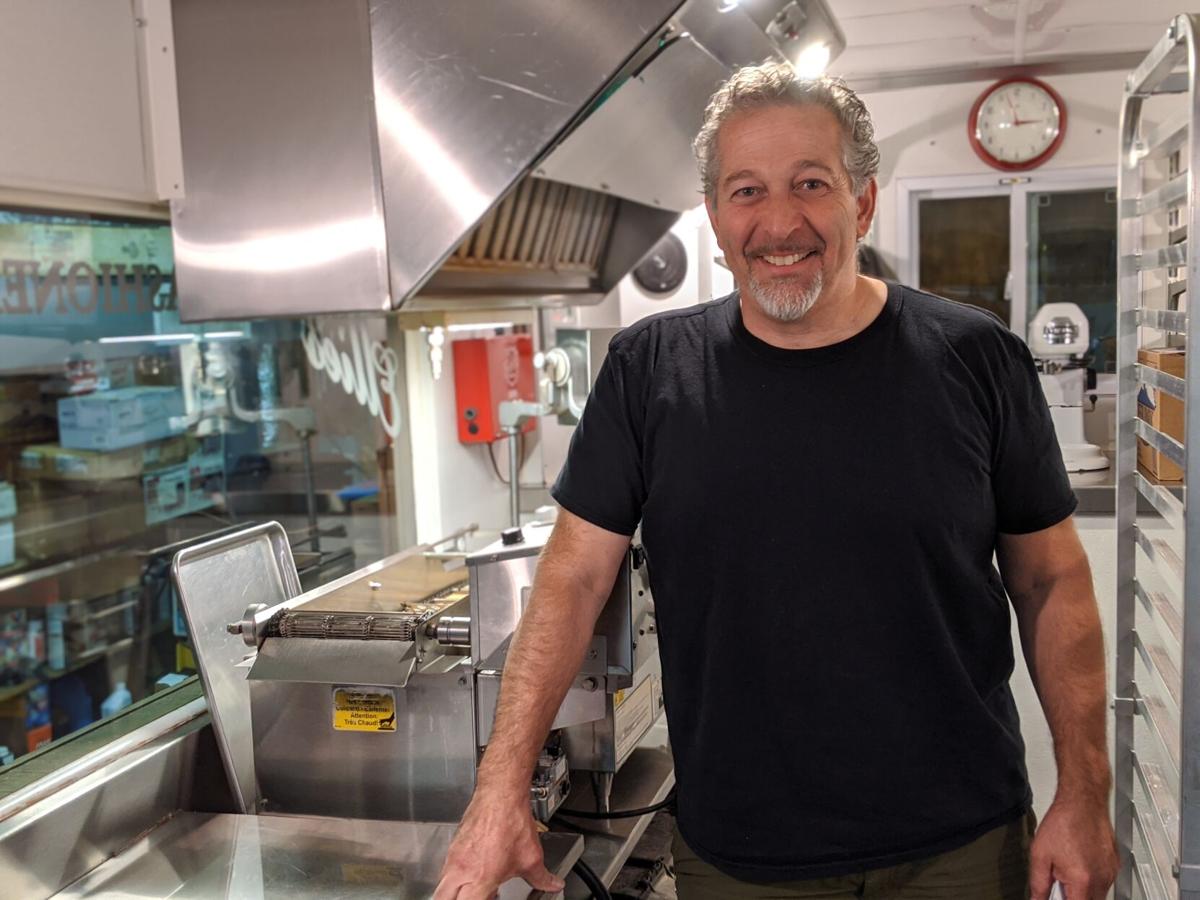 Danny Tassone opened Ellie’s Old Fashioned Doughnuts at the Franklin Farmers Market in 2010 with a recipe tweaked from the one he learned as a kid at his family’s grocery and bakery in upstate New York. 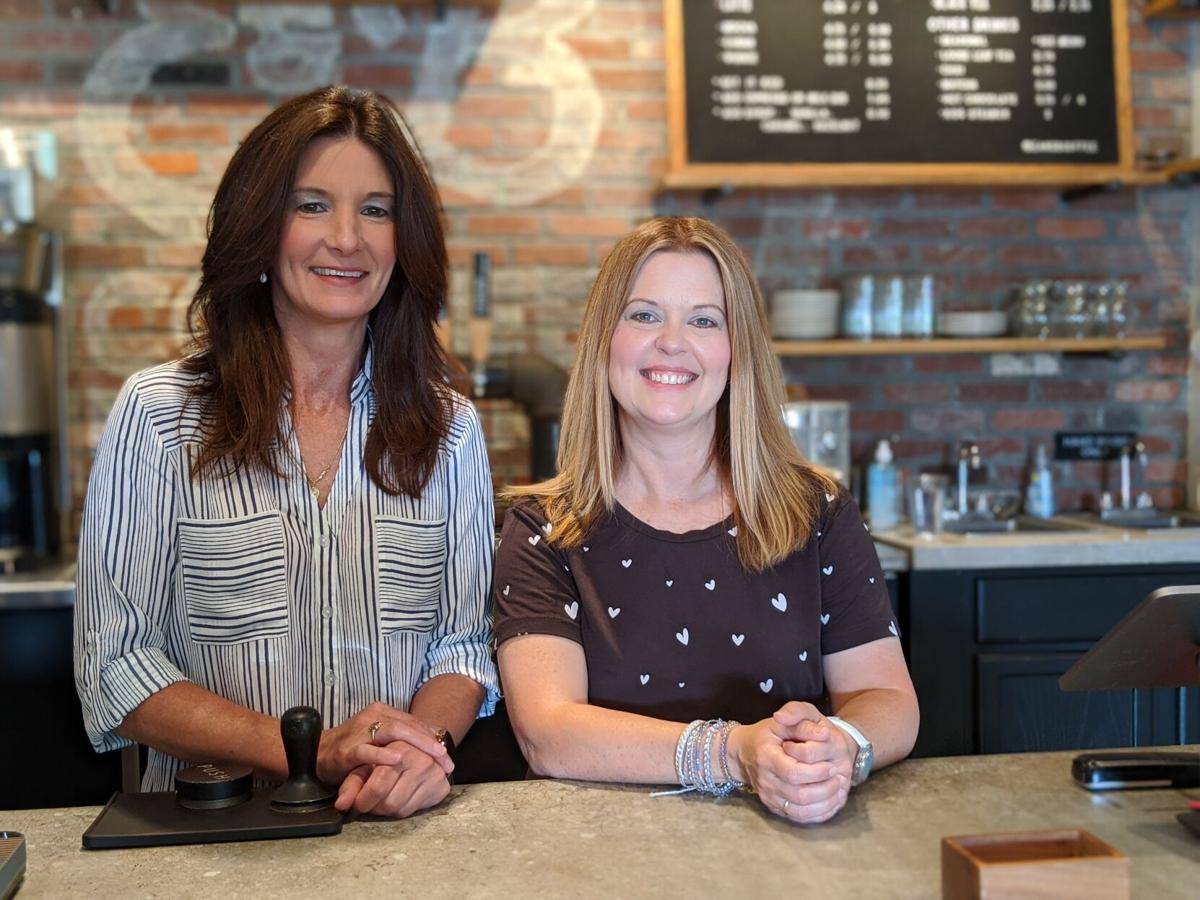 Misty Brown, left, and Kristy Bigham opened their brick-and-mortar location for Itty Bitty Donuts in a former coffee shop just before the COVID-19 pandemic hit Middle Tennessee. After a time of curbside delivery only, they are now serving coffee and doughnuts inside their shop. 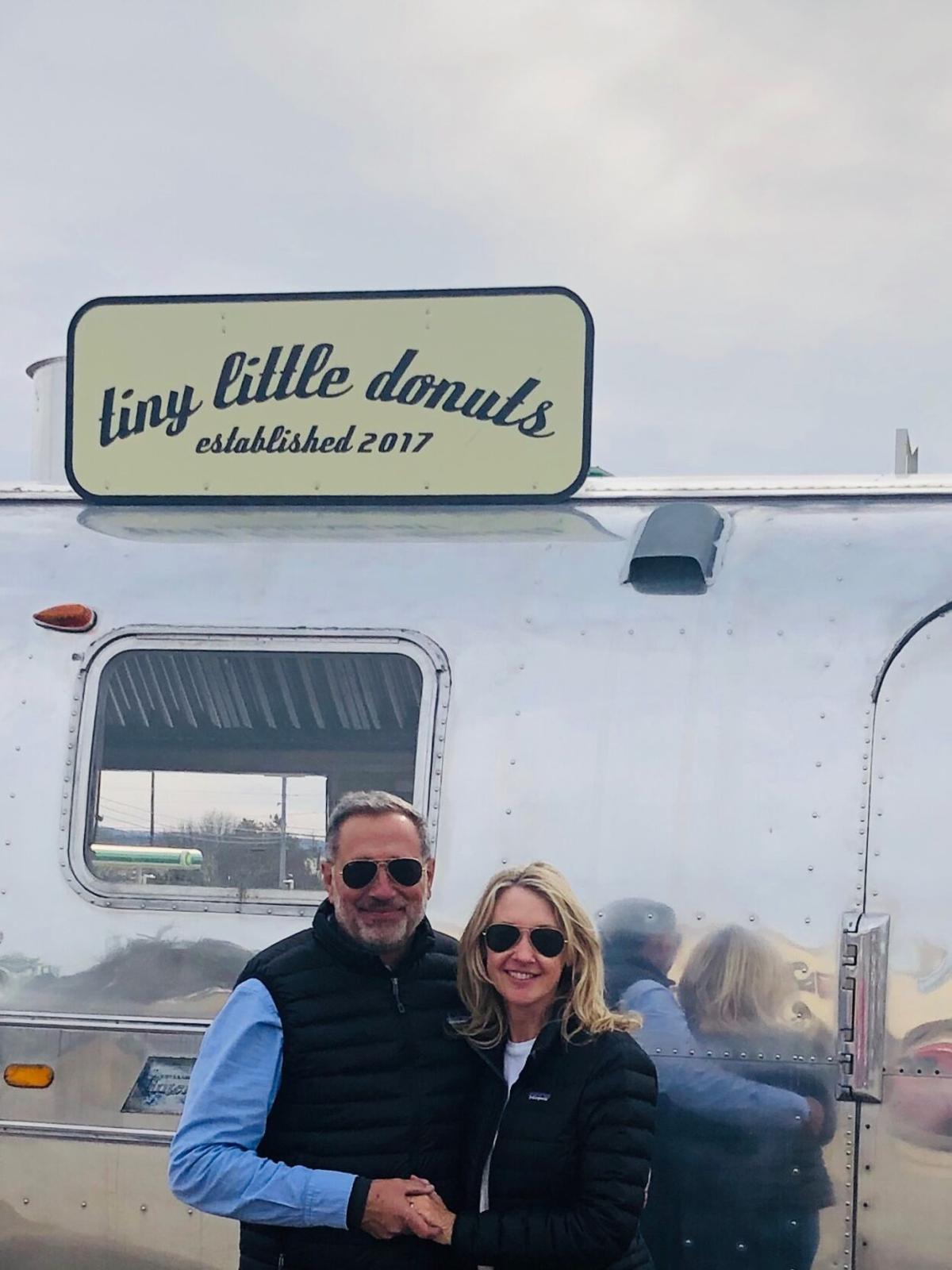 Mark and Tammy Mogul opened Tiny Little Donuts in 2017. The couple now has two locations in Franklin and plans to open a brick-and-mortar location in Nashville later this year.

Isaac Meek opened Five Daughters Bakery out of his own kitchen in 2015 and now has a spot in The Factory at Franklin, three shops in Nashville and two in Atlanta, Georgia.

Danny Tassone opened Ellie’s Old Fashioned Doughnuts at the Franklin Farmers Market in 2010 with a recipe tweaked from the one he learned as a kid at his family’s grocery and bakery in upstate New York.

Misty Brown, left, and Kristy Bigham opened their brick-and-mortar location for Itty Bitty Donuts in a former coffee shop just before the COVID-19 pandemic hit Middle Tennessee. After a time of curbside delivery only, they are now serving coffee and doughnuts inside their shop.

Mark and Tammy Mogul opened Tiny Little Donuts in 2017. The couple now has two locations in Franklin and plans to open a brick-and-mortar location in Nashville later this year.

Williamson County business owners tend to be supportive of each other, even their competitors, as they seek their niche and serving unique products. And the local doughnut scene is no exception.

Ellie’s, the oldest of the four businesses, remains in the same place it started a decade ago — at the Franklin Farmers Market on Saturday mornings. However, the inspiration for the sugary treats came far before 2010, as owner Danny Tassone grew up learning the ins and outs of baking, cooking and confection at his family’s grocery business in upstate New York, which included a from-scratch bakery and kitchen.

He said that it was there where he learned and loved to bake. Upon the death of his first wife Ellen, or “Ellie,” Tassone wanted to honor her memory and pursued a portable bakery business in Franklin.

Starting out by hauling heavy stainless steel tables and equipment to the farmers market every week and setting up shop under a 10-by-10-foot tent, Tassone drew on his family-fostered skills as he crafted his cinnamon-sugar-coated crowd pleasers.

A few years later, Tassone utilized his background in mechanics, a career he pursued upon leaving the grocery business, and built the truck that serves as the home of Ellie’s today. He said that the mobility of operating from a truck has allowed the team to “never miss a beat” during the coronavirus pandemic. He said that, today, they’re busier than ever, and he thanks his New York work experience for his flexibility and quick pace.

“I grew up in that whole hustle and bustle and knowing how to move,” he said. “You have to be able to move when you’re in the food business.”

Itty Bitty Donuts, in Nolensville, also started in a food truck and called the Nolensville Farmers Market home beginning in 2013. After developing a long partnership with E&B Coffee Roasters, owners Misty Brown and Kristy Bigham this year started talking with E&B owners about running its shop on Nolensville Road as a doughnut cafe featuring their doughnuts and a full E&B coffee menu, allowing the E&B team’s efforts to be focused on the roasting side of the coffee business.

“We always paired our doughnuts with their coffee and vice versa,” Brown said. “They decided that they wanted to be more on the roasting side of things, and this opportunity came about. … It was the perfects situation, except for that happened on March 1.”

March was meant to usher in a wave of excitement, new business and celebration, but a tornado struck Nolensville’s northern neighbors on the night of March 2 and COVID-19 reached Williamson County shortly after, putting a damper on the owners’ big week.

However, Brown and Bigham pressed on and were able to remain open throughout the pandemic for curbside pickup and keep their new staff members employed. A couple weeks ago, Itty Bitty Donuts opened its doors for dine-in customers with a limited menu of cinnamon sugar and powdered sugar doughnuts alongside a variety of drink options featuring E&B’s freshly and locally roasted organic coffee.

It is the made-to-order doughnuts combined with the coffee shop vibe that Brown and Bigham feel make their business unique. On Friday, the shop will begin rolling out some of its other popular flavors once again, including glazed, lemon poppy seed and maple glazed.

Isaac Meek, owner of Five Daughters Bakery, found his niche in creating gourmet doughnuts with high-quality ingredients. Meek, a former accountant, said that the idea for a bakery came to him in 2014 when he was looking for a change in work. While he assumed the change would bring him to another accounting job, he felt like God was leading him to pursue baking, one of his passions.

At the request of a friend, his idea for a cake and cupcake shop — pastries with which he was familiar — morphed into a gourmet doughnut shop, and Meek got to work in January of 2015 to create what is known as a cronut, a cross between a croissant and a doughnut.

“I had never made a croissant or a doughnut,” Meeks said. But he had confidence that he could bake anything, and after less than two weeks, he had created Five Daughters’ famous 100-layer doughnut.

He said that because he and his family switched to clean eating about a decade ago, he learned to make doughnuts using high-quality ingredients, such as organic flour and butter, and skipping any highly processed components. He said brainstorming ways to create flavors such as rocky road in a doughnut without using high-fructose corn syrup or other similar ingredients is a fun challenge.

“It’s not healthy for anyone to eat any doughnut all the time, but pretty much everybody, I think, should treat themselves from time to time,” he said. “And having something that we love so much and also we know is clean because we do it, is such a blessing.”

Five Daughters also prides itself in its paleo doughnuts that are made from a recipe Meek said needed no revisions from the first batch.

Mark Mogul, owner of Tiny Little Donuts in Franklin, also enjoys treating his community with sweets, and he is committed to the full experience.

A few years ago, Mogul stopped into a doughnut shop and was fascinated by the machine that dropped and fried the doughnuts. When he and his wife, Tammy, decided to move from South Carolina to Tennessee, they settled upon Franklin in 2017 and turned Mogul’s excitement about the doughnut machine into an experience he now shares with the community.

“We were going to go and check out Nashville, and we never quite made it to Nashville,” he said. “We got as far as Franklin and fell in love with the charm and feel of the community.”

He renovated a 1977 Airstream trailer, popped in the mini doughnut machine and, without any marketing for the grand opening of Tiny Little Donuts, served a long line of excited customers on day one at its location on Fifth Avenue. And even in the trailer’s small space, Mogul made sure to allow room for customers to step inside and watch the little doughnut machine at work.

“People come in and actually see the doughnuts being made right in front of them,” he said. “So, they’re fresh and hot, not premade sitting on a shelf. We don’t have prepackaged doughnuts.”

His business sold more than a million doughnuts in its first year. Mogul opened his second Airstream trailer along Murfreesboro Road at the end of January. He has plans to step outside Franklin just a bit and later this year open a brick-and-mortar location in Nashville in the SoBro area.

He said he has loved becoming a part of what he loved about Franklin in the first place: the community.

“It’s not an easy business, but it is rewarding,” he said. “We wanted to be part of the community. That’s really important to us. That was what we were looking for in coming to Franklin.”

For more information on each shop, visit facebook.com/ElliesDoughnuts, IttyBittyDonuts.com, FiveDaughtersBakery.com and TinyLittleDonuts.com. Each shop also posts information on its Facebook and Instagram pages.