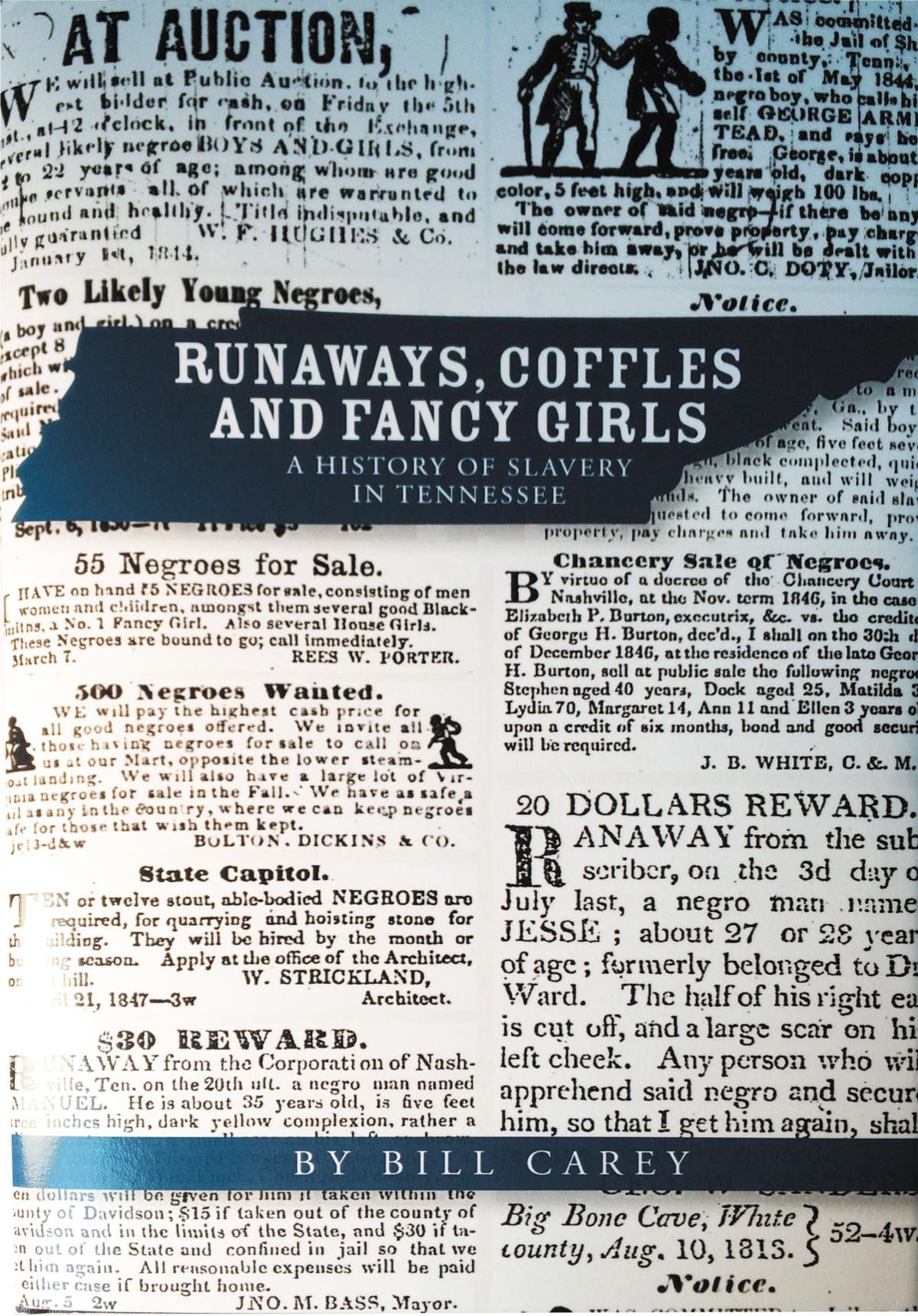 Bill Carey’s book can be found at Barnes & Noble and Landmark Booksellers in Franklin and at Parnassus Books in Nashville, among other places. 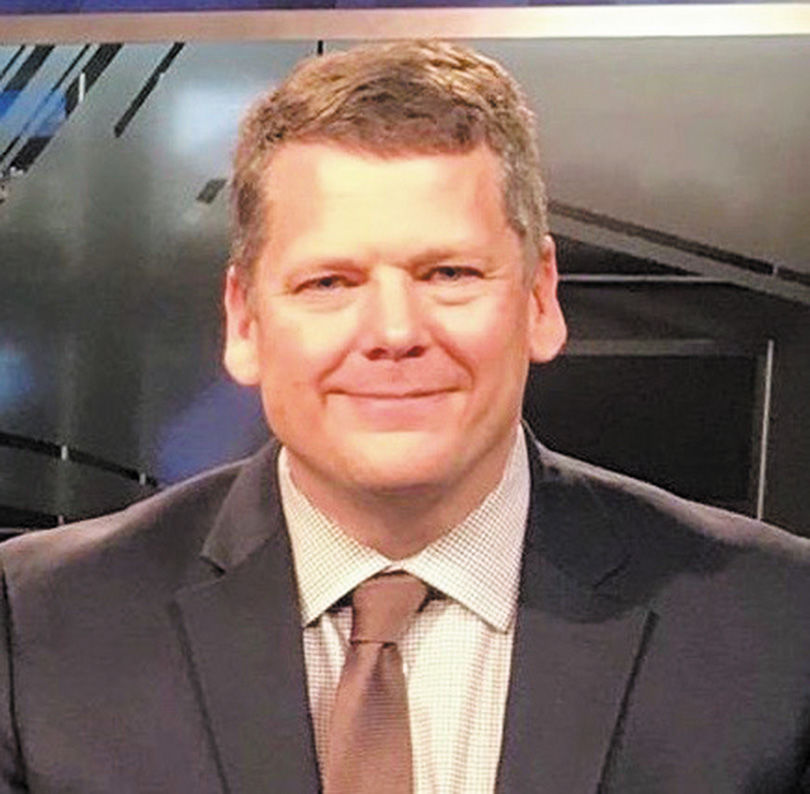 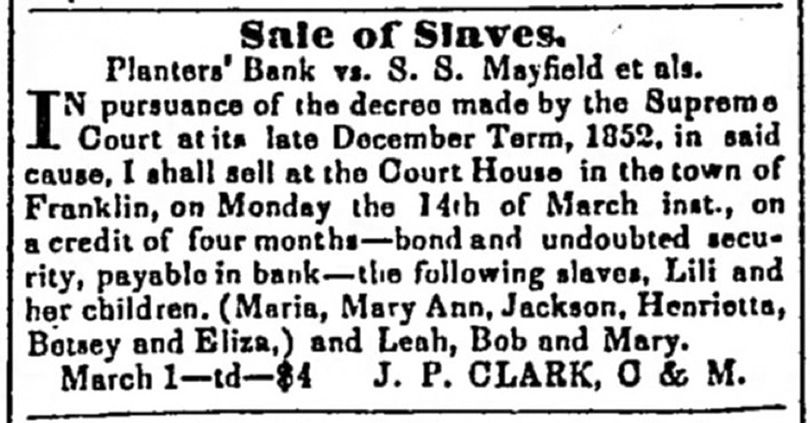 This ad from 1852 is for the sale of 10 slaves in front of the Williamson County Courthouse, where slave trades were often held before slavery ended.

Bill Carey’s book can be found at Barnes & Noble and Landmark Booksellers in Franklin and at Parnassus Books in Nashville, among other places.

This ad from 1852 is for the sale of 10 slaves in front of the Williamson County Courthouse, where slave trades were often held before slavery ended.

Has scars on the side of her neck and “is fond of dressing well.” When spoken to, “she has a peculiar turn with the eyes.”…

—Description of Ellen from an ad in the Tennessee Watchman

“Fore finger on his right hand is stiff” and has a scar above his left eyebrow.

—Description of George from an ad in the Knoxville Register

“Slow-motioned and slow of utterance.”

In his new book, “Runaways, Coffles and Fancy Girls: A History of Slavery in Tennessee,” Franklin author and historian Bill Carey includes a 56-page appendix of various runaway slave ads found in old newspapers from across the state.

Each item consists of the slave’s name and age; the newspaper’s name where the ad appeared and the publication date; the slave holder’s name and the county in which the slave was held; and, most compellingly, a special note about the slave that could help lead to his or her capture.

Most of the notes include a description of the slave. The fact that many of these are in great detail demonstrates how owners knew their slaves through and through, according to Carey.

“These slave owners knew their slaves as well as a public school teacher knows their students,” Carey told the Herald. “It doesn’t matter if they owned 50 or they owned eight. It’s weird to think that they [not only] owned the slave and controlled the slave’s life, but they knew who they were and had a direct, close relationship with these people that can be best described as intimate.”

Simply scanning the appendix of runaway slave ads gives the reader an idea of how entrenched slavery was in Tennessee from the 1790s to the 1860s, the years covered through all the newspapers Carey had found in his research. There are 901 ads listed.

But the book is much more than a record of the ads, and Carey’s hope in writing it is to bring to light the “untold” story of slavery in Tennessee. He points out in the book that educators in the state can be misleading students to believe that slavery wasn’t as bad in the Volunteer state as in other states in the South.

“I hope this book results in a greater understanding of slavery in Tennessee,” Carey writes in the preface. “I hope teachers start incorporating more lessons about slavery into their classes. … I’d like to see historic markers about slavery in places such as the corner of 4th and Charlotte in downtown Nashville; the Niota Train Depot in McMinn County; and the Williamson County Courthouse.”

Carey, who has been executive director of the nonprofit organization Tennessee History for Kids since 2004, includes himself among those who have, in some sense, avoided the topic of slavery in history lessons.

“I don’t think we talk about it as much in Tennessee,” Carey said. “Even I am guilty of not talking enough about slavery until the Civil War. We talk about Daniel Boone and Davy Crockett and John Sevier, and then all of a sudden, [we’re] in 1855, and we’re talking about slaves and how this is the cause of the Civil War.”

Carey’s book details the history of slavery in all three major regions of Tennessee, pointing out in the first chapter, for instance, that “East Tennessee’s history generally doesn’t bring to mind the institution of slavery. But slaves were there, … being bought and sold, being given away in lotteries and even running away from their owners.”

Other chapters explore more about the runaways, the buying and selling of slaves, the effects on the economy and, finally, the end of slavery.

And from the title of the book, Carey delves into the disturbing idea of coffles and “fancy girls.” The latter, as Carey describes in his book, “was a physically attractive slave, usually multiracial, who was sold to be a concubine.”

Coffles were not an uncommon sight in Tennessee or elsewhere in the South.

“They were chain gangs of slaves walking down the highway, either because they’re being traded or moved somewhere,” Carey told the Herald. “It appears to have been a common sight in the antebellum South, so common that people didn’t even write about it unless you were visiting the South from the North, in which case you were shocked by the sight of it and did write about it.”

Carey has written a monthly column for “Tennessee Magazine” since 2006, and previously published the book “Fortunes, Fiddles and Fried Chicken: A Nashville Business History.” He will sign copies of his current book at Barnes & Noble Saturday, June 23, from 1-3 p.m. and at the McLemore House Museum’s Porch Talk in Franklin Friday, July 6, at 10 a.m.

The book is available at Barnes & Noble, Landmark Booksellers and Parnassus Books, as well as through the website www.clearbrookpress.com.