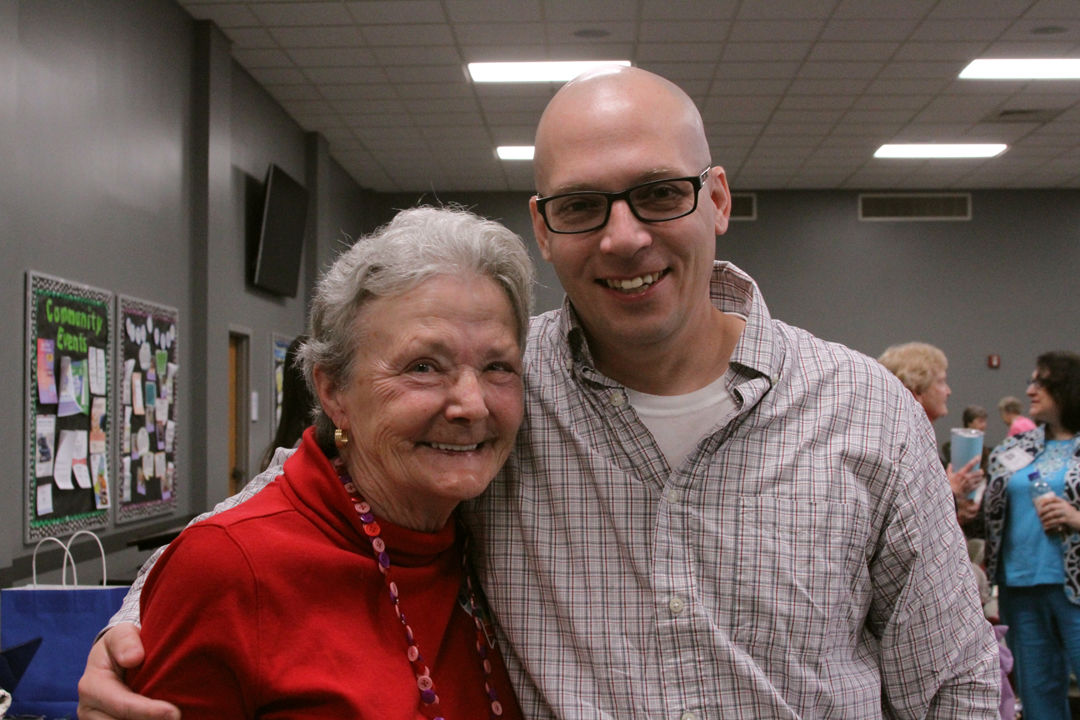 Pat McMahon, a member of the Cumberland Valley Quilters and the Quilts of Valor quilters, receives a big hug from Staff Sgt. Andrew Lee, a combat veteran who discovered quilting helps him control PTSD. Lee recently was a guest speaker at the CVQ monthly meeting, prior to the quarantine for COVID-19. 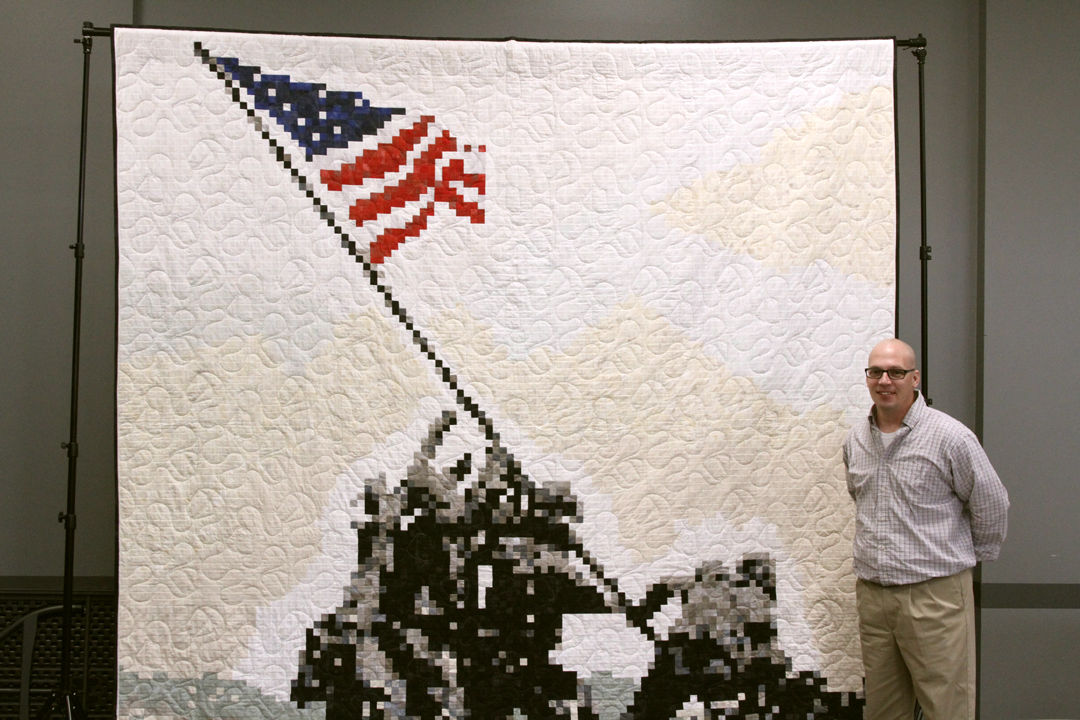 Staff Sgt. Andrew Lee stands with the quilt he made to honor those who fought in WWII. The quilt was inspired by the Joe Rosenthal 1945 photo of Marines raising the American flag on the island of Iwo Jima. Lee used 12,100 one-inch square blocks to create the 110X110 inch quilt.

Pat McMahon, a member of the Cumberland Valley Quilters and the Quilts of Valor quilters, receives a big hug from Staff Sgt. Andrew Lee, a combat veteran who discovered quilting helps him control PTSD. Lee recently was a guest speaker at the CVQ monthly meeting, prior to the quarantine for COVID-19.

Staff Sgt. Andrew Lee stands with the quilt he made to honor those who fought in WWII. The quilt was inspired by the Joe Rosenthal 1945 photo of Marines raising the American flag on the island of Iwo Jima. Lee used 12,100 one-inch square blocks to create the 110X110 inch quilt.

Army Staff Sgt. Andrew Lee spent 10 years on active duty. He was deployed to the Middle East three times with special forces attached to the Green Berets and is now active as a trainer in the National Guard in Smyrna.

Recently, Lee was the guest speaker at the Cumberland Valley Quilter’s monthly meeting at First Presbyterian Church in Franklin.

Standing in front of a 110- by 110-inch quilt he made from Joe Rosenthal’s famous 1945 photograph of Marines raising the American flag on Iwo Jima, the Loudon, Tennessee resident casually talked about his journey from combat veteran to award-winning quilter.

“I was a graphics art student at the Chicago Institute of Art in 1996,” he said. “A friend stopped by – wearing his [Army] uniform. A few months later I dropped out and left for the Army in 1997.”

A combat infantry soldier, Lee was sent to sniper school and airborne school where he was selected for special training and served with the Green Berets.

Lee’s first deployment was to Korea in 1999. In 2001, he was part of the first teams out of Kosovo into Afghanistan for the onset of Operation Enduring Freedom. Lee was also among the first in 2003 to go into Iraq for Operation Iraqi Freedom.

During his second deployment to Iraq in January 2006, he and two friends were leaving Kuwait City heading to Bagdad when an IED blew up their vehicle.

“We were thrown 16-and-a-half feet into the air,” he said. “Carlos Smith from Omaha suffered traumatic brain injury.”

Lee received numerous injuries and has plenty of scars – not all visible. After serving 10 years in the Army, Lee left the military only to return within a couple months as a truck driver for the Army and later an instructor in the Army National Guard in Smyrna.

During his deployments Lee learned to survive by shutting down his feelings, but when he returned from the second deployment, he couldn‘t turn them back on. At home he lost himself in video games and became “zombie-like.” The video games were like therapy. They allowed him to keep his emotions shut down, but at a cost.

Then he discovered quilting.

It all began when his wife Kristy complained they didn’t do anything together. He found a flyer from Jo-Ann Fabrics in the mailbox advertising a two-for-one table runner class.

“I thought I’d be a hero and make one for my mother for Christmas,” he said. “It was a win-win situation."

Much to Kristy’s surprise, he signed them up. Turned out he could sew, and well.

He quickly graduated to whole quilts.

Lee discovered how to cut squares for 11 quilts at one time and was off and sewing.

Kristy’s sewing room shelves are stacked high with fabric and Lee has taken over another room. For several years he even took his cutting board, fabric, ironing board and sewing machine with him in the Volvo VNL 760 long haul truck he drove on deliveries across country. He worked on his quilts during his required off-time. Much of the work on the 12,100 blocks in the Iwo Jima quilt were sewn together in the truck.

Lee’s addiction to video games was rechannelled to quilts and his disposition lightened. Some quilts he sells, some he makes for gifts but most are donated to Quilts of Valor, an organization that makes quilts to “cover service members and veterans touched by war with comforting and healing quilts” made with love.

“PTSD is something you got to keep inside,” he said. “Fortunately, I found quilting and it’s been there for me.”

Lee recalled the first QoV quilt he presented. It was to a stoic World War II veteran.

“He said he didn’t deserve it,” Lee said, “I said, ‘Mr. Carpenter, you walked into Normandy; you didn’t ride or get dropped in by parachute. Anyone who walked in deserves this quilt.’”

The moment Carpenter accepted the quilt, Lee’s life was changed.

“When I awarded him his quilt, it was the first time I felt something since I came home,” he said.

In another instance, after talking on the phone to a fellow veteran, Lee had an odd feeling the veteran might be suicidal so he made a quilt for him.

“I presented it to him a week later at a Sunday breakfast,” Lee said. “Four months later at a baseball game in Pigeon Forge I saw him and he told me he planned to commit suicide after the breakfast. He went there to say goodbye. The Quilt of Valor changed that.”

Through quilting, Lee has learned to mitigate his triggers while discovering an entire new career. Lee sold his long-haul truck in the summer of 2019 and bought a long-arm quilting machine

But that’s not normal.

Lee travels to quilt shows and has plenty of ribbons to show. He finishes quilts and sells some.

Recently, Lee was introduced to Teresa Drury Long, who became his agent and who found a permanent home for the Iwo Jima quilt. On Nov. 11, 2020 it will be hung in the International Quilt Museum in Omaha, Nebraska.

Then he can start his next big project: a quilt version of the firefighters raising the American flag at Ground Zero after 9/11. That one will have 22,400 pieces, he said.

He also plans to create how-to-quilt videos and “eventually I want to open a veteran-focused retreat where veterans can spread their wings in a therapy realm.”