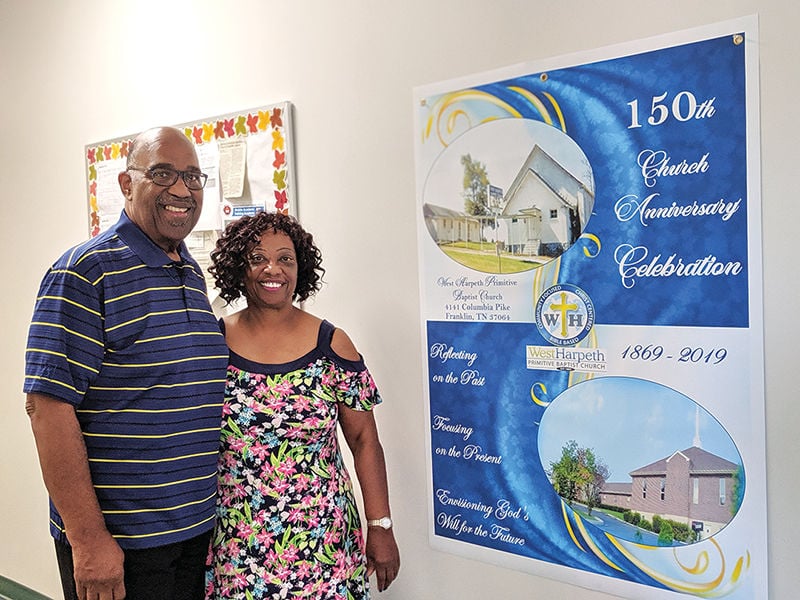 Hewitt Sawyers and his wife, Annie, pastor the West Harpeth Primitive Baptist Church, which is celebrating its 150th anniversary this year with a look at the church’s history and its future. 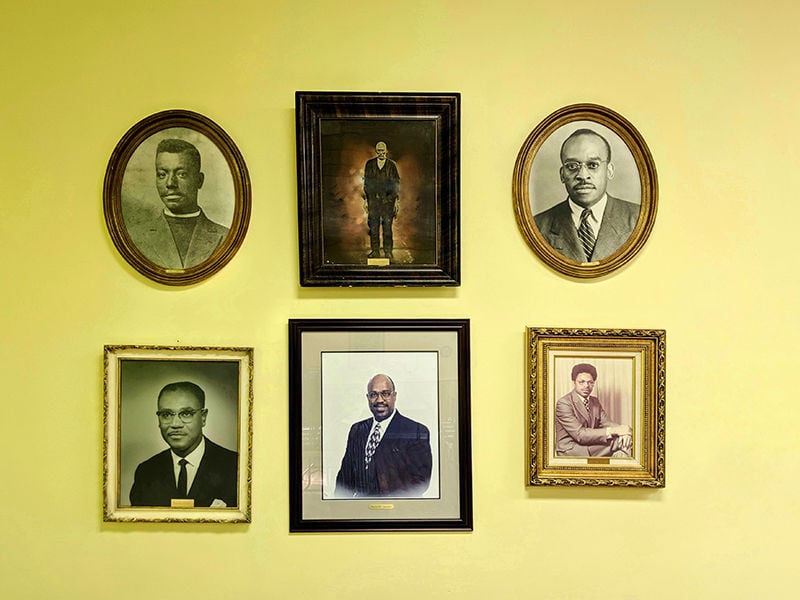 The church honors the six pastors who have served over the span of a century and a half. Pictured in the middle of the bottom row is Hewitt Sawyers, the current pastor.

Hewitt Sawyers and his wife, Annie, pastor the West Harpeth Primitive Baptist Church, which is celebrating its 150th anniversary this year with a look at the church’s history and its future.

The church honors the six pastors who have served over the span of a century and a half. Pictured in the middle of the bottom row is Hewitt Sawyers, the current pastor.

A 150th anniversary is a rare occurrence in a country that is only 243 years old, but this year, West Harpeth Primitive Baptist Church is celebrating its century-and-a-half milestone with a whole slew of activities.

Pastor Hewitt Sawyers, his wife, Annie, and the church community have been celebrating since the beginning of the year, and this month, they have several commemorating events planned.

Annie Sawyers said that throughout the year, the church has moved from reflecting on the past to focusing on the present and is now envisioning the future. Hewitt stressed the importance of learning from history and building upon it.

He said many of the church’s founders had just stepped out of a life in slavery, noting that the church was founded only a few years after the signing of the Emancipation Proclamation.

“We want to get a flavor of what that was like — people who had just gotten out of that kind of lifestyle,” he said. “If we can get a grasp of that, then we really need to appreciate where God has brought us. If we can understand, that is really a celebration. It is something to really thank God for.”

While church members have always held that the church was founded in 1869, as they dug into old documents, they found evidence of a meeting that could date the establishment to three years earlier. Whether this is the 150th or 153rd anniversary, though, this church has survived a lot.

Hewitt said that when he came to the church 36 years ago, the members were without a pastor and he felt his role was to help redevelop the church into an active, thriving body.

“Typically, in the Primitive Baptist faith, there’s not a lot of turnover unless there’s some type of trauma, or what have you,” he said. And indeed, Hewitt is only the sixth pastor in 150 years.

As the church studies its history, it brings a thirst for understanding into its broader mission as well, realizing it is meant to serve diverse peoples. Annie mentioned that different generations tend to have different ideas of what church is and should be, and Hewitt explained that he thinks of this as the natural evolution of people. He said he is constantly challenged in ministering to many different worldviews.

Annie mentioned that many members of the younger generations — millennials and iGen (or Generation Z) — have begun to deviate more from the traditional Sunday morning church services, focusing more on outreach and sometimes even implementing remote, online church service options. She said this shows that people’s views are largely determined by their backgrounds and where they came from.

Regardless of any person’s individual ideas of church, though, she and her husband say they’ve kept an open mind and have sought to cater to diverse needs. She says that some things remain rooted in tradition, but in some areas, it’s OK to evolve.

As the church looks toward the future, Annie said they are seeking God’s direction in serving the needs of the church’s ever-changing members, particularly as younger generations pose the question: “What is church?”

For those desiring outreach opportunities, the church has partnered with other ministries, such as Gateway Franklin Church and Franktown Open Hearts.

“We really believe in this idea of community,” Hewitt said. “Everything can’t be done within our walls and by our people, but if we can partner with others, then we can do what I believe the Lord wants done because the church is not just right here. The church is ecumenical (or universal).”

However, celebrating the things that have been done within the church’s walls is important, too, and the church has planned a gala and special service to serve as the pinnacle of this yearlong commemoration.

The gala is set for Friday the Franklin Marriott, and the organizers will give out door prizes and souvenir booklets. Various musical performances and speakers will carry guests through the night to the end, when the dance floor will be open.

Additionally, the church will hold two special services on Oct. 27 — one at 11 a.m. and one at 4 p.m. — when Kevin Riggs of Franklin Community Church will serve as the guest speaker and talk about the future of the church. Also, between services, a marker dedication declaring the church as a historical site, will be at 2:30 p.m.