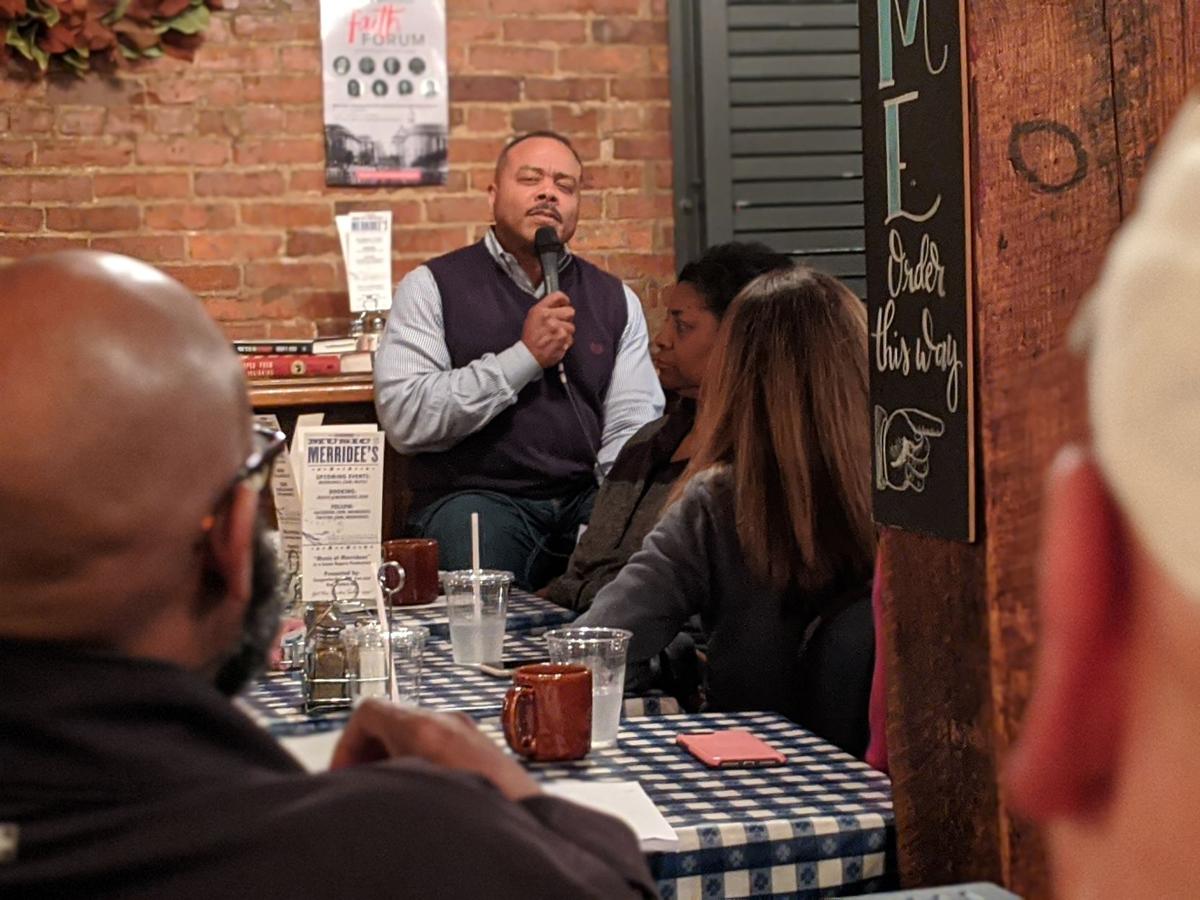 Anthony Hendricks discusses what it means to be an antiracist at the first meeting in 2020 of The Public. 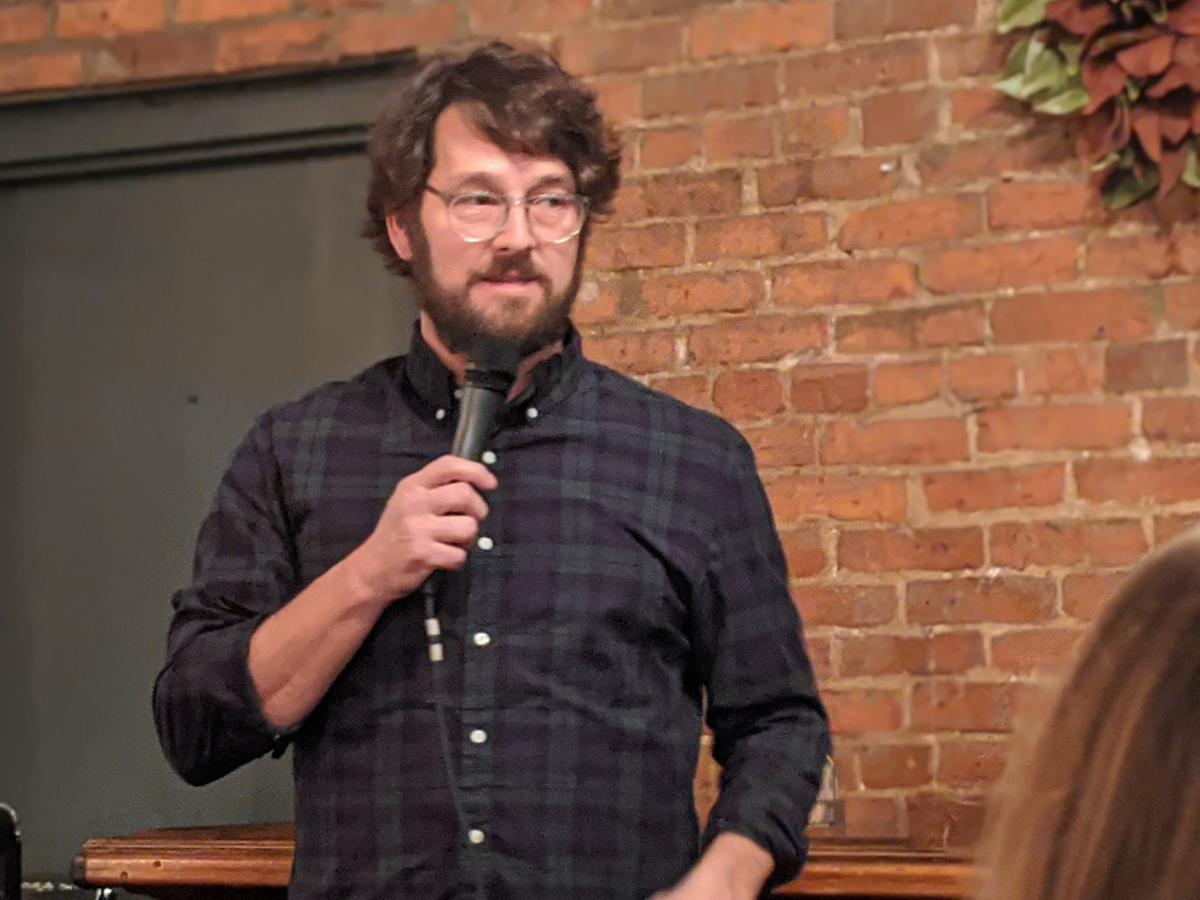 Brad Perry, a teacher of African American History, started The Public with Anthony Hendricks early last year. The group meets every other Thursday to hold a candid discussion on race.

Anthony Hendricks discusses what it means to be an antiracist at the first meeting in 2020 of The Public.

Brad Perry, a teacher of African American History, started The Public with Anthony Hendricks early last year. The group meets every other Thursday to hold a candid discussion on race.

Williamson County has a rich history, and as the community begins to explore previously quieted aspects of its past, two local educators felt the community’s desire for more, but not just for more education —  for a discussion and a call to action.

Over the last year, members of the community have congregated at Merridee’s Breadbasket to join The Public: A Conversation on Race. Led by Anthony Hendricks, a Williamson College professor and the director of operations at GraceWorks Ministries, and Brad Perry, a local educator on African American history, The Public began as a way to help educate the community on the history of race and foster unity through action against racism.

“History is about telling the truth, and we have to tell the truth first,” Perry said. “And I think, unfortunately, a lot of times the truth — it wasn’t told.”

The Franklin community has delved into aspects of its racial history through the Fuller Story initiative, which brought monuments to Public Square that commemorated the African American experience during the Civil War era.

Additionally, Carnton recently established a monument honoring the enslaved buried at the McGavock Cemetery. Every year, the community also gathers at First Missionary Baptist Church in honor of Martin Luther King Jr. Day and marches down to the public square to symbolize racial unity and King’s nonviolent movement.

However, Hendricks and Perry see much more to be done, and not just in Franklin.

Hendricks explained the idea of a white race did not really exist until light-skinned Americans determined it would be more advantageous to identify as “white” as opposed to Italian or Polish or English, and throughout history, “white” has been used as a term to convey superiority. As American society became continually more racialized, racist ideas began to dictate policy, and that affects everyone.

“This is everybody, not just white people … anybody that grew up in a racialized society,” he said. “[If] I’m told, within that racialized society, that there is a group of people who are inferior, who are sexually deviant, who are criminally minded, if I grew up hearing that, then I’m going to internalize those racist ideas. So, when it comes time for me to vote for a policy, then I’m going to vote based upon all of these ideas that I’ve internalized over the years.”

He said evidence of this can be seen in areas such as Chicago and Baltimore which have high African American populations and are largely results of redlining. During the Great Migration in the 1900s, when African Americans fled from injustice in the South to the Northern states, the government designated specific areas for these migrants, segregating them from “white” society.

“So, these African Americans are moving to the North — mind you, with college degrees, some of them with secondary degrees — yet they’ve been relegated to this area and also relegated to jobs that were very, very [much] lower than what they had been educated to do,” Hendricks said. “Meanwhile, immigrants from other European countries were coming in, not knowing the language, not knowing the culture, but getting better jobs than the African Americans.”

In ways similar to this, Hendricks and Perry said, racist ideas have infiltrated many governmental policies and culture in ways that are sometimes difficult to detect. They hope revealing these racist ideas throughout history and current society will begin to empower people to fight for change.

“When some people hear the term ‘racist,’ they think ‘bad person,’ ‘hateful,’ and all of that. That’s not what I’m saying,” Hendricks said. “What I’m saying is you’ve been racialized into thinking a certain way; you’re racist. And I don’t think that that person is racist for the rest of their lives. I think they are racist in a particular situation. They may be racist in a particular way that they see things at that particular point, which is the reason why we do The Public.”

The Public held eight meetings last year, and Thursday’s marked the first meeting of 2020. About 30 people shuffled into the back of the cafe to begin a discussion about the idea of being an antiracist.

According to Hendricks, who is himself African American, combatting the societal narrative that says African Americans are “inferior, lazy, criminally minded” is difficult for both black and white people.

“I have to fight against that every day,” he said. “And I’m an educated guy.”

For white people, Hendricks said, it can be difficult to be an antiracist because it is often costly. For example, he shared the recent story about Lipscomb Academy, a private, pre-kindergarten through 12th grade school in Nashville which lost its head of school — and a lot of funding — after controversy over its students being taught about white privilege.

The Public will continue the discussion on becoming antiracist at its next meeting at 7 p.m. Thursday, Feb. 13 at Merridee’s Breadbasket.

Hendricks is also teaching a 10-week course through Williamson College called “Christ-centered Biblical Unity: Race, Justice, and the Role of the Believer,” and he encouraged those interested to join. Registration for the course is $79, and more information can be found at williamsoncc.edu.

For more information on The Public, visit the Facebook page, @ThePublicFranklin.

It is a shame Mr. Hendricks would promote such left wing, unproven notions such as "white privilege". It really stirs up a lot of racial division. It is so disappointing.

In order to stir up racial division, racism has to already exist in the pot that’s being stirred. Like Denny Denison of Franklin said, “If no one stirs the pot, the beans on the bottom get burned.” Ask any person of color if they believe in the notion of white privilege. Just because you don’t want it to exist or that you don’t consciously rely on it, doesn’t mean it doesn’t exist.

I appreciate your readership and engagement with this article. Upon speaking with Mr. Hendricks and listening to the full conversation a couple weeks ago, I was struck by the effort he put into building a historical framework around his comments on race. I hope I can provide a bit more context that will give a fuller picture of Mr. Hendricks’ approach.

He explained that racism changes throughout history and that racism now is much more covert than it was in the 1800s, but there are still policies that reflect racist ideas.

As the discussion turned to poll taxes, which are no longer instated because they are deemed discriminatory, one citizen pointed out that Alabama showcases examples of modern-day poll taxes. Here is a link to a story outlining some of those details: https://www.al.com/news/2016/10/alabama_law_blocks_1_in_13_adu.html

Hendricks explained that race is a construct, that it was created to separate the light-skinned from the dark-skinned, merging smaller ethnic groups into one “white” majority. He said, because white is the dominant culture in America, white people don’t typically see themselves as a “group,” and they’re often considered the “default.” This is where the term “white privilege” comes in. According to Hendricks, racism or even white privilege is not necessarily hateful or intentional but is a product of the construct of race. Additionally, he explained that white privilege has its roots in the same place as racism — racist policies designed to separate or discriminate against African Americans. As I understand from this discussion, white privilege is not necessarily garnered by actively being racist, though it can be, but it’s the fact that white people reap the benefits of racist policies that are still in place today.

I always seek to be impartial in the stories I report, omitting my personal opinions and sticking to the facts and the exact words said in a given situation. I hope you see my effort to do the same in this response, and I would like to encourage you to listen to the entire discussion from The Public yourself to learn more, which can be found at this link: https://www.mediafire.com/file/q95lgxogc2vkb4v/THEPUBLIC1-30.mp3/file?fbclid=IwAR2BcdrJpSRcL7Eoi3aguXZRHLz7RnbQQ7oMtBZau1B2XIXD660vb7aX4Io.

I would also encourage you to visit the next event on Feb. 13 and seek mutual understanding with Hendricks himself. The goal of The Public is to facilitate conversations that aren’t happening in everyday life in a productive manner all for the sake of unity, and if I’m allowed a personal comment, I hope those on different sides of this issue can realize that there is hope for reconciliation through respectful dialogue.