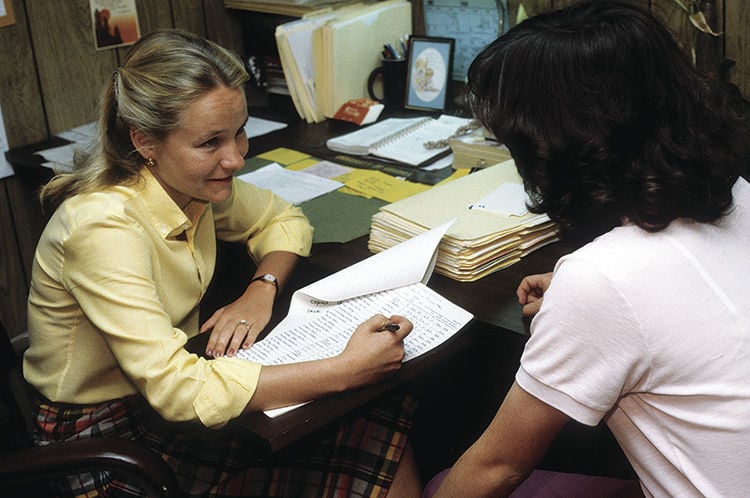 Nancy Brasher ’73 (the first graduating class), currently serves as the BA middle school director; pictured here in the early years as one of our college counselors. 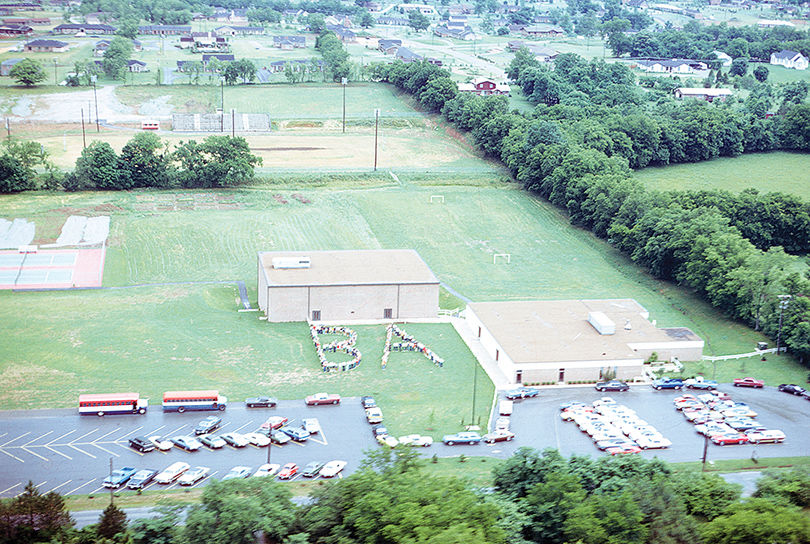 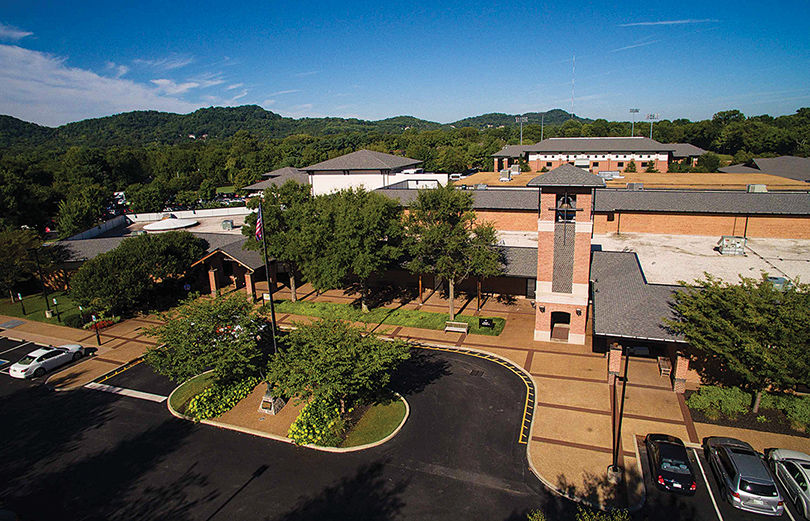 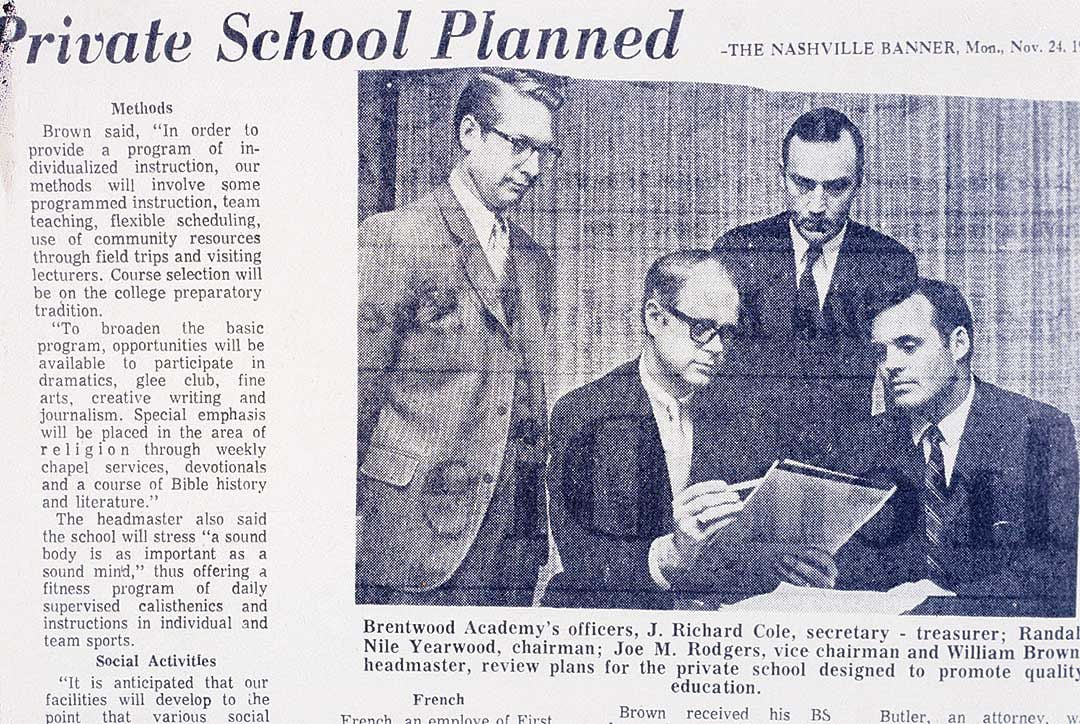 A story in the Nashville Banner about the school's start

The first graduating class of Brentwood Academy in 1973. 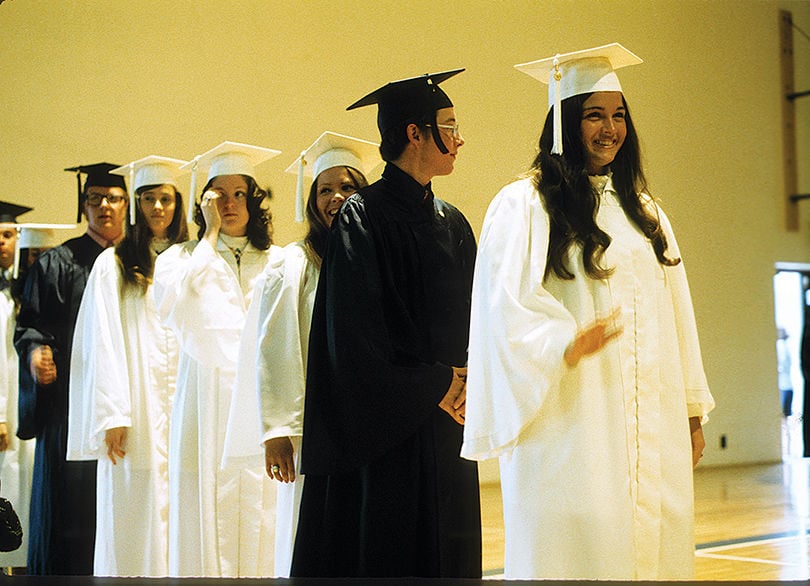 Nancy Brasher ’73 (the first graduating class), currently serves as the BA middle school director; pictured here in the early years as one of our college counselors.

A story in the Nashville Banner about the school's start

The first graduating class of Brentwood Academy in 1973.

Brentwood Academy this fall will join the city it calls home in celebrating a milestone.

Fifty years of commitment, set in place in 1969 by charter and by faith, has yielded a solid institution, according to leaders and alumni.

Helping the student gain an appreciation of mind, body and spirit is the centerpiece, he said, pointing to the founders’ mission of academics, athletics and spirituality.

“As a trustee,” he said, “you are always working to try to keep that mission in balance.”

Wright ascribes the school’s achievements over five decades in great degree to having been led by only two headmasters: Bill Brown, founding head, and Curt Masters.

Wright, who first joined the Brentwood Academy Board of Trust in 1994¸ served 12 years, during which time Brown announced his retirement after nearly 30 years. He says appointing Masters in 2000 after a lengthy search was a pivotal moment in the BA story.

Wright knew the two leaders shared the same mission when he witnessed Brown pass the torch to Masters, while still remaining close to the school as headmaster emeritus.

This fact alone is unusual in private school leadership, since retirement of a founding head of school usually means more change in subsequent years.

In the mid-1990s, Brown and the school’s board had made critical decisions about expansion and possible relocation.

Although there was opportunity to purchase property near Concord Road and Interstate 65, the need to potentially relocate disappeared when longtime neighbor Maggie Speight offered to sell her acreage to the school. An agreement, forged by Brown, saw that she would live out her life in her home even as the expansion moved forward.

When asked how the trustees grappled with these challenges of growth in the ’90s and leadership change in the early 2000s, Wright named three distinct decision points when the consequences of choice deeply mattered to him and his colleagues.

“The experience of keeping the campus and school on its original land; the transferring from the founding headmaster to the replacement headmaster, and that continuity; and just keeping the school consistent with its founding principles and vision” is what Wright highlights.

Nancy Brasher identifies with BA as an alumnus, a witness to its earliest years as a senior in the first graduating class of 1973, as well as a leader in her own right. Early in her career, she returned to her alma mater and began what has almost been a lifelong career.

Years before her appointment as head of the middle school, she had served on the alumni council and board of trustees.

Today, she speaks of how she believes the mission manifests itself daily.

“BA taught me that they’re going to challenge you as a student,” she said. That extends outside the classroom, from “challenging how you take notes in class to how you dribble the basketball.”

Ultimately, Brasher said, the challenge becomes how you trust in God for strength. That spiritual side is centered on seeking God’s divine guidance in all things pursued in life.

“It’s a toughness and a tenderness,” she said.

As a student, Brasher learned that truth from teachers and leaders. Today, her love for the school is embodied in her work with young families, building relationships with students, parents and alumni.

The best example she finds daily of how to treat others is found in Brown and Masters, she explained.

“It’s really about how they both honor each other, and it’s real,” Brasher said, underscoring the humility of the two men. “That’s been one of the sweetest blessings of my life to serve under these two headmasters.”

The combination of an environment filled with rich relationships and hard work is a certainty.

“There is an unbelievable work ethic and a compassion for others. I’ve seen a glimpse of God over the years. There have been some struggles, a lot of struggles, and a lot of victories. I have been taught that God is faithful.

Jon Billington, who serves with Wright on the board of trustees, said he believes the school’s impact has only begun.

“Brentwood Academy students and alumni over the past 50 years have had and continue to have an amazing positive impact on our community,” Billington said.  “(The school) has been intertwined with the growth and success of the city of Brentwood, Williamson County and Middle Tennessee since 1969.”

While all these elements factored into his family’s decision to choose BA, there was one singular reason.

“One of the primary reasons we enrolled our children was that we observed how BA students and alumni conducted themselves as adults, and we wanted our children to be a part of the encouraging culture at Brentwood Academy,” he said.

As the anniversary nears, Billington singles out its significance.

“The trustees are viewing this 50-year anniversary as a celebration of our future and how we can remain a strong contributor to the Middle Tennessee community.”

Wright echoed Billington’s words as to how each student’s life, well beyond his or her academic career, is central to that ongoing mission.

He underscored the importance of each student’s formation “to be productive and compassionate in the world with a good value system.”