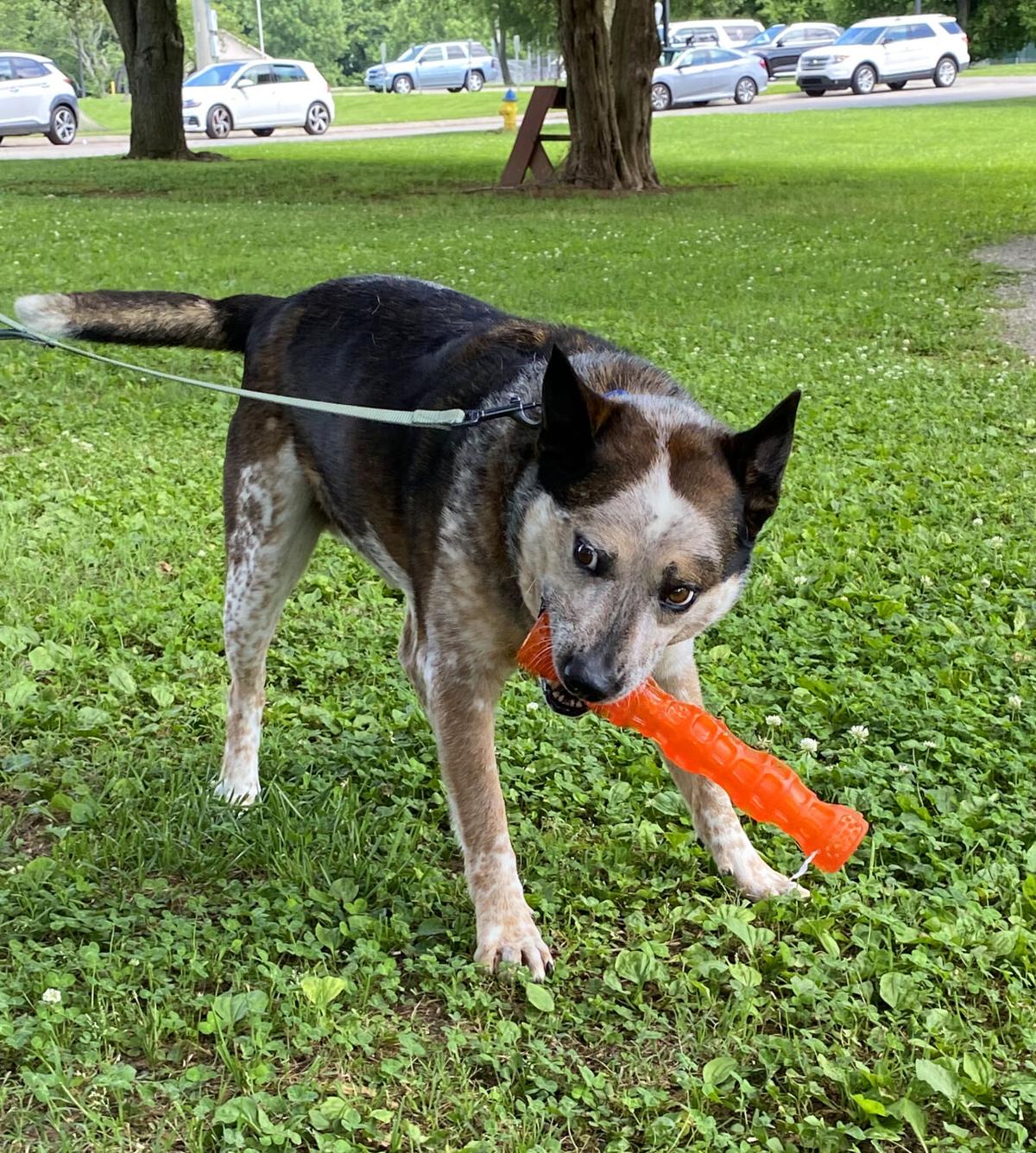 Cooper is about 7 years old, friendly and loves his toys. 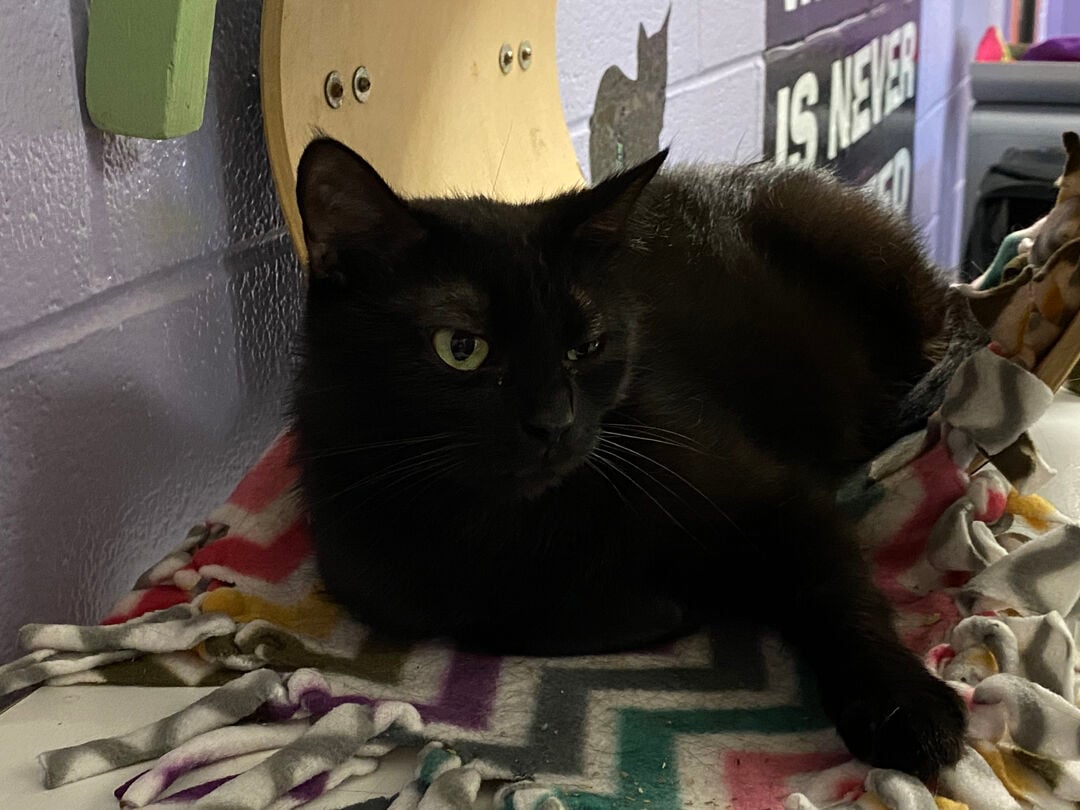 Four is a 10-year old cat who loves to play with her toys, climb, lounge and snuggle. 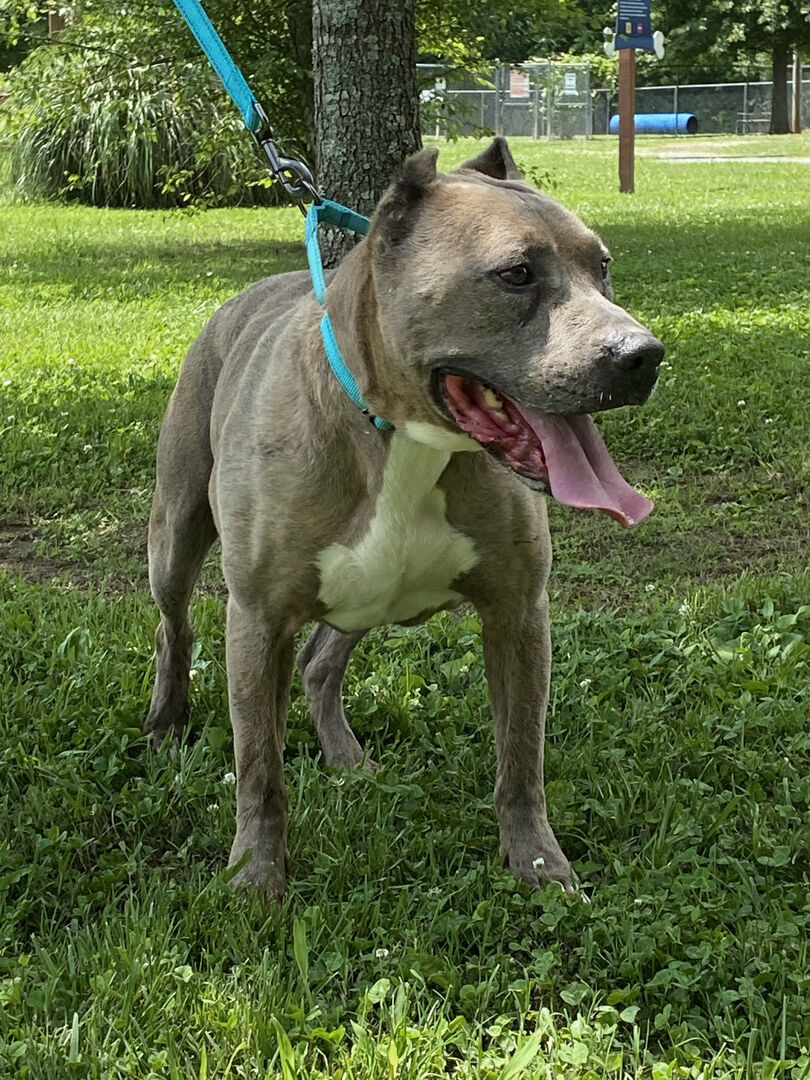 Duke is a sweet, playful 8-year-old pit bull who gets along well with other dogs. 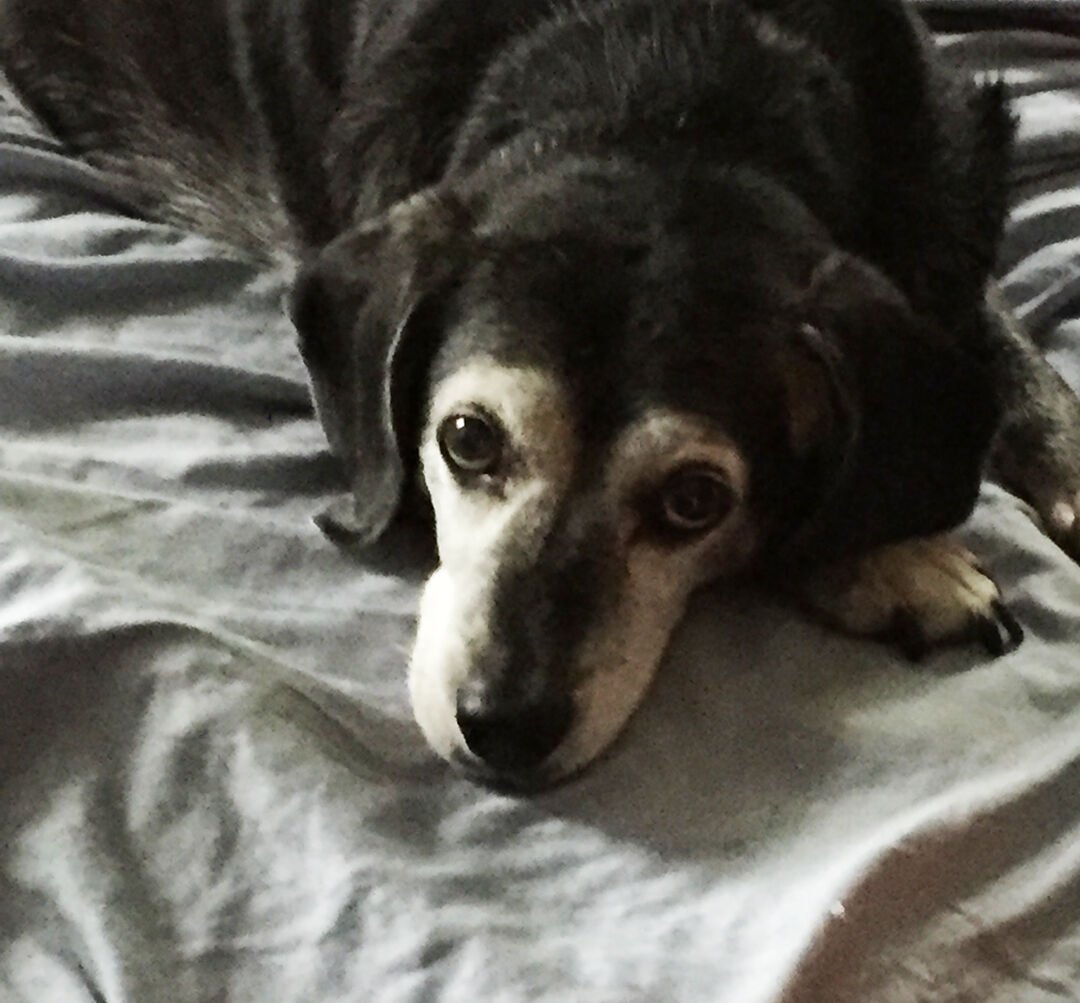 Frank was 8 years old when Ty adopted him but soon became his companion and buddy. He lived another 11.5 years. 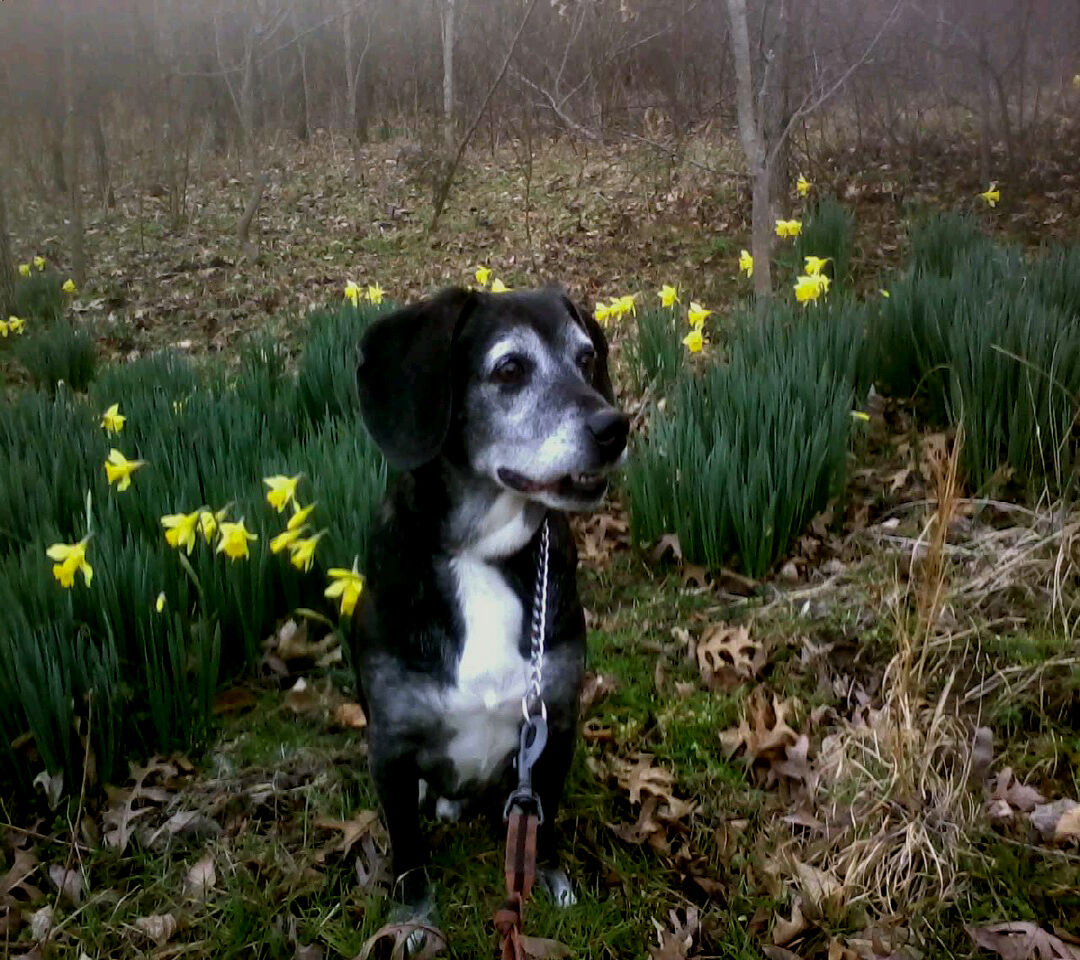 Frank at 8 years old on a spring walk in the woods.

Cooper is about 7 years old, friendly and loves his toys.

Four is a 10-year old cat who loves to play with her toys, climb, lounge and snuggle.

Duke is a sweet, playful 8-year-old pit bull who gets along well with other dogs.

Frank was 8 years old when Ty adopted him but soon became his companion and buddy. He lived another 11.5 years.

Frank at 8 years old on a spring walk in the woods.

Thinking of adopting a dog or cat now or in the future? This time of year is great for adopting a pet, since owners don’t have to grab a jacket and a pair of shoes with the leash to go outside.

When families and individuals think about adopting, most automatically think of puppies and kittens. It’s easier to house break, leash train and walk those high-energy pups, and even kittens can be trained to go outside when the weather is nice.

But why not consider adopting an older or senior dog or cat?

“Puppies are a lot of work,” said Ondrea Johnson, Williamson County Animal Center director. “They take a lot of time — they don’t know anything.”

Puppies learn a few manners from their mother during the short time they spend together, but once they’re adopted, it’s up to their human to teach them the rest. For many people, that’s just what they want.

According to Johnson, people often think older animals won’t fit in easily; they aren’t as much fun as a puppy or they will have problems.

“It’s not a lost opportunity to form an older or senior animal into what you want them to be — it’s just like training a puppy; you just skip all the crappy parts,” she said. “Some special connections are formed [with older or senior dogs] when they get adopted.”

Johnson speaks from experience. She adopted one of her dogs when he was 2 years old.

It’s not unusual for small- and medium-sized dogs to live to 16 or even older, Johnson said.

A senior dog may need chondroitin, but puppies need shots and spaying or neutering.

“Those who adopt [adult and] seniors have a soft spot,” she said. “A lot of senior dogs and cats live their life without problems for many years.”

If animals have serious health issues when they arrive at WCAC, “we don’t put them up for adoption, we place them into Fospice,” Johnson said.

“From our perspective as a shelter, dogs and cats up for adoption, generally speaking, do not have chronic health problems,” she added.

Animals are surrendered for a number of reasons that have nothing to do with their health, Johnson said. Generally, it’s because the owner is on a fixed income and can no longer afford to keep them, or the owner has developed health problems and can’t care for their animal friend.

“Give me a senior cat any day over a kitten,” Johnson said. “They are a joy to live with — they’re so easy. They’re calming.”

Older cats don’t climb the curtains, rip the rugs or scratch the furniture. They just want to sit around and watch TV with you, she added, but “they’re the last to be looked at all the time.”

On a day Ty wasn’t normally home, he was looking through the Brentwood Journal (a newspaper no longer in print) that he found in his driveway. Any other time, he would have tossed the paper in the garbage, but that day, he took time to read it. His eyes caught the Pet of the Week photo and brief description — an affectionate and independent 8-year-old Beagle with a “shiny black coat,” white markings and “a zest for life that belies his age.”

“They called him Sailor — his real name and background was unknown,” Ty said. “He was brought in [to animal control] on March 4, 2009. Something encouraged me to go look at him.”

Ty went to The Factory in Franklin where, at the time, animal control kept some of their animals. He only intended to look.

When Sailor saw Ty, he picked up his ball and went to the back of his kennel. Ty took Sailor for a walk around the Factory, put him back in the kennel and walked away. As he stepped out the door, Ty looked back and saw Sailor’s paws sticking out under the door of the cage.

“I was haunted [for days],” he said. “[Five days later], I went back, and everyone cheered. I put him in the backseat — he put his head on my shoulder.”

Ty renamed him Frank, and they immediately became best buddies.

“It was meant to be,” Ty said. “Frank was the joy of my life. Just because he was older, I think he was more appreciative, grateful to be adopted. He loved my mother — he loved people, especially older people.”

Frank loved to go on walks and play ball — he had three special balls he always kept close by, just in case someone wanted to play with him. He also loved other dogs.

Frank’s unconditional love got Ty through “many mountains and valleys,” including three deaths in his family and many great times.

When Ty brought Frank home on Memorial Day weekend in 2009, he hoped they would be together at least eight years. Frank died on Sept. 9, 2020 at the age of 19.

Frank played with his balls and took walks up until just a couple weeks before his death.

“He was a gift from God,” Ty said. “Don’t turn away from older dogs, because they can bring joy to your life. They’re so grateful you saved them.”

Don’t look at adopting an older animal as a short-term thing; just fall in love with it, Johnson said.

“Many older animals don’t think of themselves as old,” she added. “They’re easy going and often keep other animals in line. They just need a home.”