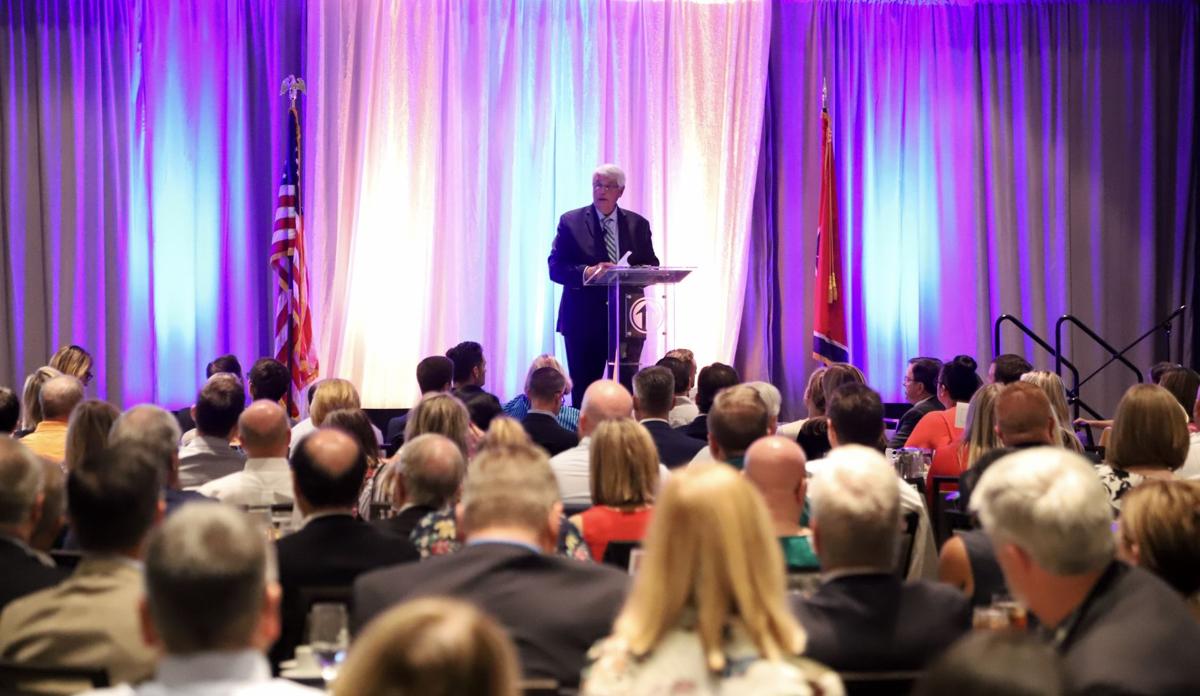 Williamson County Mayor Rogers Anderson implored county citizens to get involved in their community and the many changes happening within. 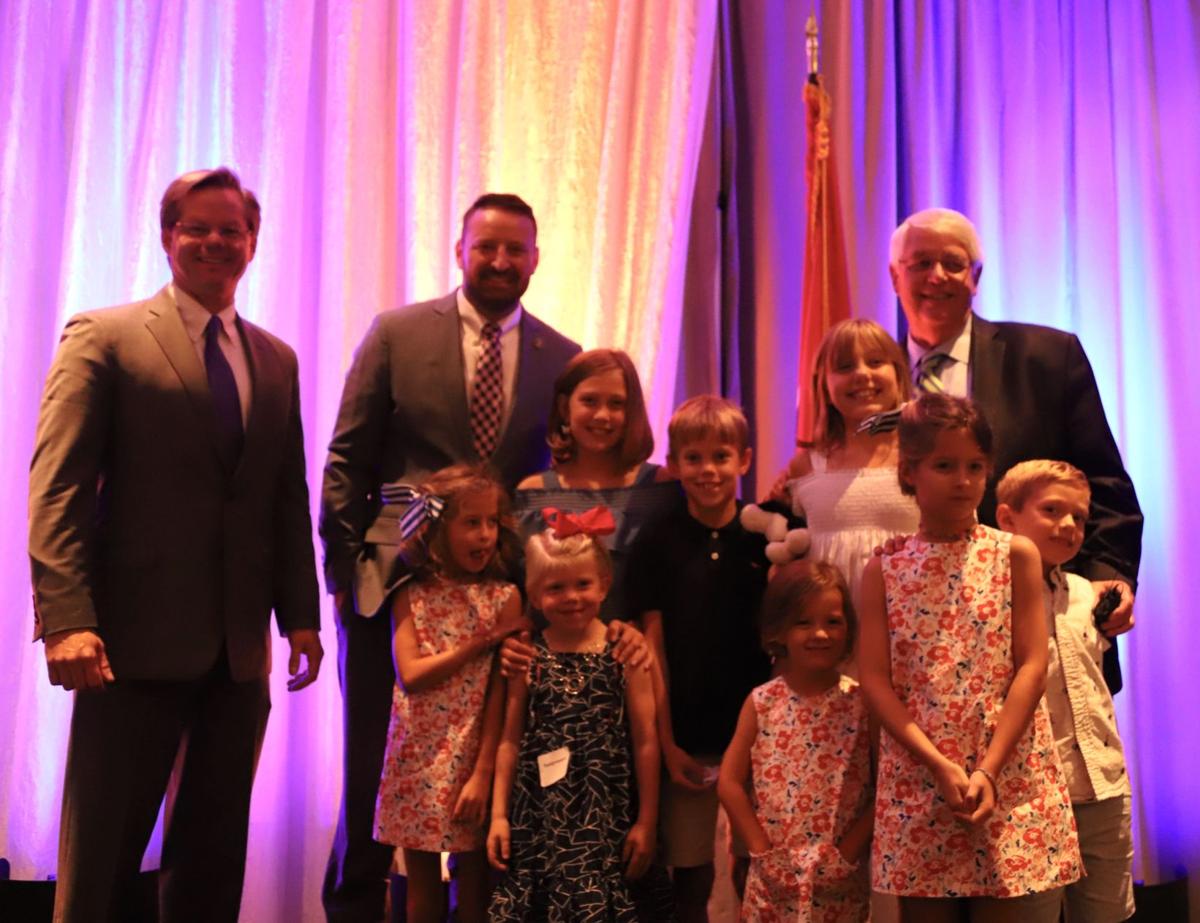 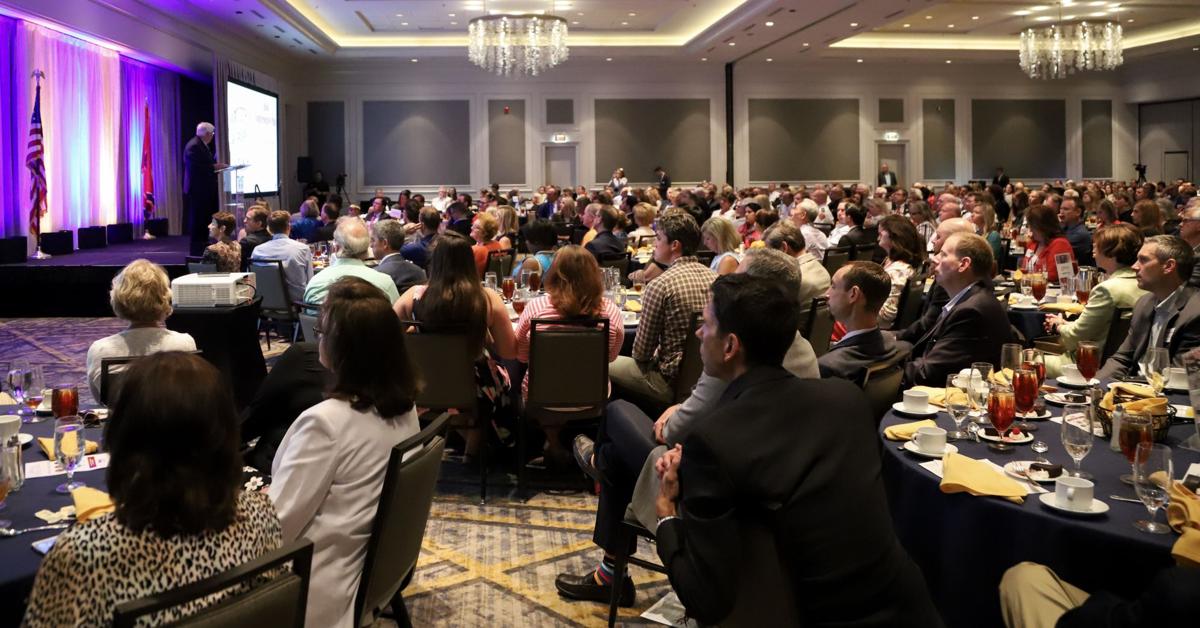 This year’s State of the County had the highest turnout of any previous Williamson Inc. event — it completely sold out. 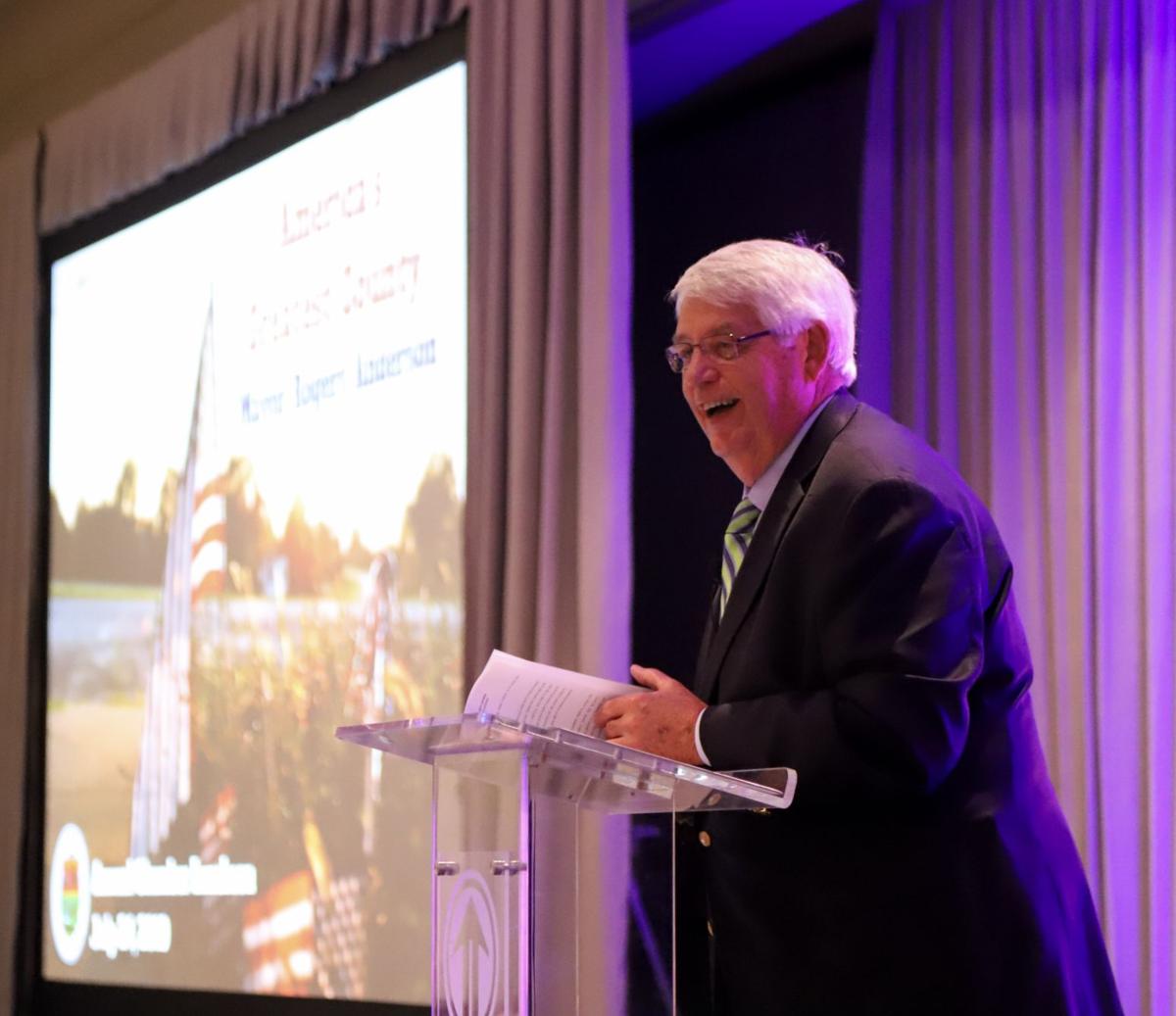 Williamson County Rogers Anderson encouraged citizens to head to the polls, sharing that very few registered voters have participated in past local elections. 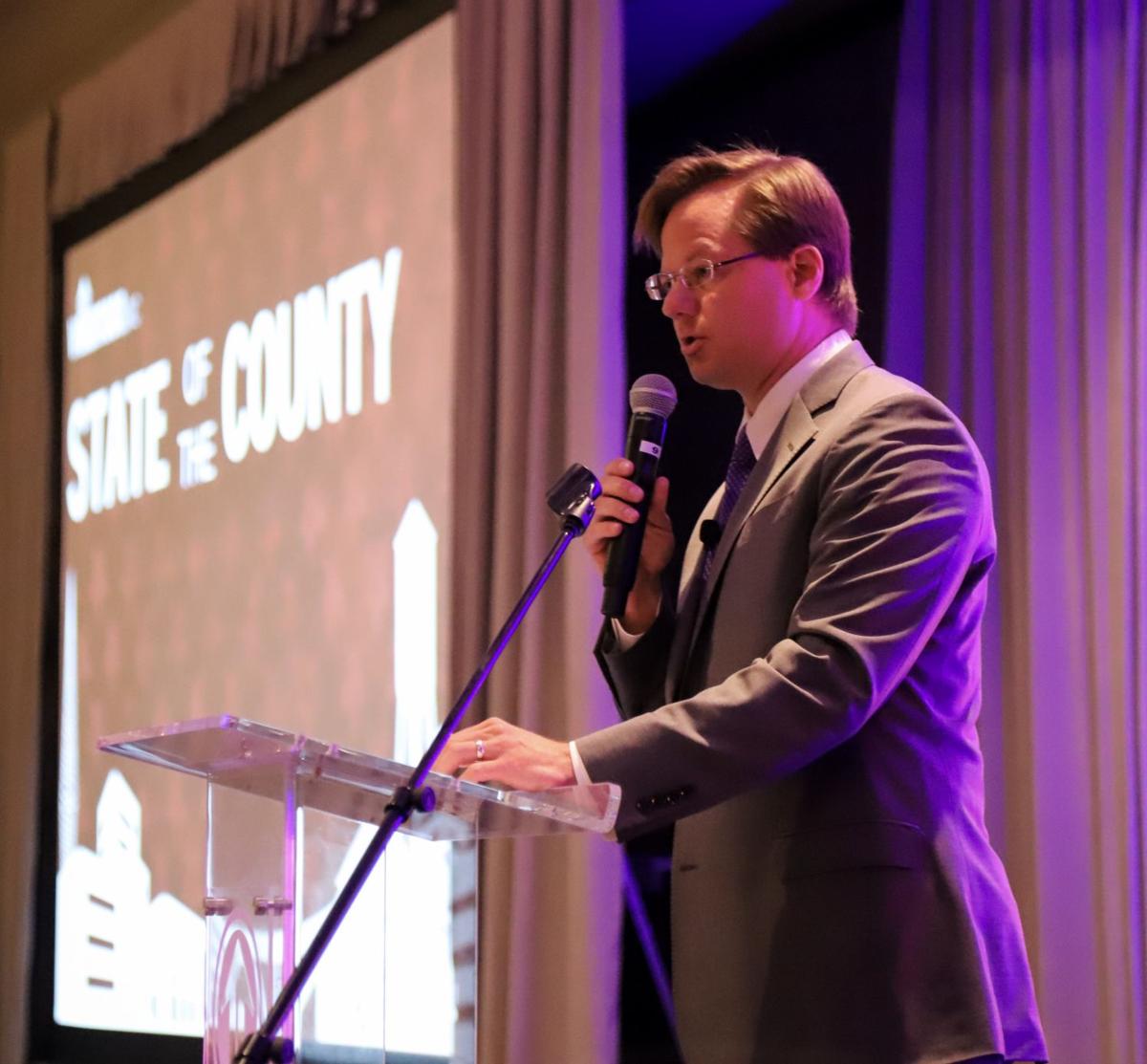 President and CEO of Williamson Inc. Matt Largen recapped some of the major business developments in the area this year, such as Mitsubishi Motors’ announcement to relocate their headquarters to Williamson County, bringing in 200 jobs.

Williamson County Mayor Rogers Anderson implored county citizens to get involved in their community and the many changes happening within.

This year’s State of the County had the highest turnout of any previous Williamson Inc. event — it completely sold out.

Williamson County Rogers Anderson encouraged citizens to head to the polls, sharing that very few registered voters have participated in past local elections.

President and CEO of Williamson Inc. Matt Largen recapped some of the major business developments in the area this year, such as Mitsubishi Motors’ announcement to relocate their headquarters to Williamson County, bringing in 200 jobs.

This year’s State of the County address was all about community engagement as Williamson County Mayor Rogers Anderson on Wednesday updated his constituents on ongoing projects and recent developments, imploring residents to get involved in the changes.

“We are fortunate to live in a great county — a county that is well-known and recognized for our business, community, our services, our values and many qualities of life that we enjoy, maybe even take for granted,” Anderson said.

Anderson’s daughter, Laura Howard, who introduced the mayor at the Williamson Inc. event in the Franklin Marriott, listed off his many achievements and involvements in the county throughout his lifetime.

“He is the neighbor that … has the coveted garden with a plentiful harvest filled with inviting vegetables where he so meticulously cultivated, all with the mindset that it is better to give than to receive from the fruits of his labor,” Howard said.

While Anderson took many moments throughout his speech to thank members of the community for their positive impacts, a majority of the address was a call to action, inviting the public to become more involved in the action happening in their very backyards.

As public education is the staple of Williamson County, and its portion of the county budget increased from its normal 65% to 73% this year, Anderson naturally started here.

Since the tax increase in February of 2018, Thompson’s Station has received new elementary and middle schools, Brentwood has seen the addition of Jordan Elementary School and Franklin will mark the opening of Creekside Elementary School this coming January.

This money has also helped to fund improvements to Page Middle and Page High and the renovations turning the facility by Franklin High School into the sparkling new Entrepreneurship and Innovation Center.

Anderson responded to those who worry about county growth greatly affecting existing taxes by recapping the effects of the Educational Impact Fee passed in 2017. That fee ensures that newcomers help pay for the building expansions necessary to accommodate their residency.

“I wasn’t the favorite child of homebuilders that day, I understand that,” Anderson said.

But he explained that, apart from fees under protest as a result of an appeal against the county, the fee has brought in nearly $27 million, about $6.6 million of which has helped to offset school capital projects so far, leaving a considerable budget for future growth.

Anderson mentioned that the Williamson County School District’s operational budget for 2019-20 was recently passed, allowing for 1,048 new students and 152 new teachers in addition to an increase in pay for starting teachers, making Williamson County’s rates competitive with the surrounding counties.

He stressed the importance of the tax money coming in from locals to continue to fund such a great school system, saying that the state’s Basic Education Program does not recognize as necessary the 587 positions that are completely funded by the county and keep Williamson County schools at the top.

“If I could get the state funding … we could reduce taxes 40 cents. That is never going to happen, but it’s a great political statement for me to stand up here and say,” Anderson said with a laugh.

Many other projects apart from schools are in the works this year as well. The Parks and Recreation Department is bringing major changes, including a group fitness studio, gymnasium and splash park to the indoor sports complex in Brentwood and the Wilkins Branch Mountain Bike Park in Leiper’s Fork.

A new animal care center is planned for just north of Highway 96, and county officials are continuing talks regarding improvements to the juvenile detention center.

“Williamson County has always valued the importance of educating our children,” Anderson said. “We have to be a leader in protecting them now.”

Roads, including the Mack Hatcher Extension project, are becoming an increased priority as efforts are being made to create a full loop around Franklin. Meanwhile, a new Buckner Road interchange at Interstate 65 in Spring Hill should help ease congestion there.

Anderson mentioned that, despite all these new projects, roughly 60% of the county is still undeveloped, leaving plenty of room for growth. He encouraged residents to get involved in the development process.

“You need to tell the Planning Commission how you want it to look over the next 10-15 years,” Anderson said.

However, as new faces come into the county — projected at 66% more by 2048, to be specific — not all the growth will be residential, evidenced by the new businesses already in town or in the process of relocating to the county. Among them are Mitsubishi Motors, Mars Petcare and even the Grilled Cheeserie in Downtown Franklin.

Matt Largen, president and CEO of Williamson Inc., said that not only will this bring revenue and growth to the county, but it will also provide jobs for existing residents.

“Even in an economy that has a low unemployment rate … there are still people here that are underemployed or unemployed,” Largen said. “So, when we work hard to recruit a company like Mitsubishi … they create, not just jobs, but career opportunities for our kids, our grandkids, our friends, our neighbors.”

There is even an environmental change coming to the county’s recycling program that may, at first glance, seem like a setback but should help improve the quality of the recycling loads.

Soon, residents will be able to recycle only No. 1 and No. 2 plastics — most bottles, jugs and jars. This will exclude plastic bags, flower pots and yogurt cups to name a few products.

While this may seem like a step back, Anderson explained that this is because those plastics — Nos. 3-7 — no longer have a reliable market and will affect the reusability of the more common plastics if included in the same loads.

Anderson encouraged residents to switch to reusable grocery bags and travel mugs and to rinse out plastic products before tossing them in the recycling bin.

“The worst thing you can do is take that plastic peanut butter jar — nobody wants to clean that thing out,” Anderson said. “If you don’t rinse it out and you throw it in recycling, we contaminate the entire load. So, if you’re not going to rinse it, just throw it in your regular trash.”

Stand up and be counted

Anderson also implored registered voters to keep up with their government elections and actually go out to the polls. He said that although Williamson County has a high turnout for federal elections, municipal elections are lacking in their voting numbers.

Of all the registered voters in Brentwood, only 12.8% actually voted in the municipal elections in May, and the numbers are even lower for Franklin, at 9.2% in 2017. Additionally, only 8.8% of registered voters got involved in the proposed sales tax increase passed last year.

“There will be another election coming up in this fall, and I encourage you, if you’re a registered voter here in the Franklin geographic area, I know the aldermen and the mayor would appreciate your support,” Anderson said.

He also encouraged participation in the upcoming 2020 Census, which he said is not just meant to keep tabs on the number of residents in any given area.

“This is the only way that Williamson County can receive the rewards from the federal and the state government when they are calculating and distributing the new money based on the population,” Anderson said.

“Getting an accurate headcount also ensures that we have equal representation at the federal, the state and the local level. Everyone counts, and it’s up to you to make sure you’re counted in the 2020 Census.”

“I want to encourage you to seek out those areas that are important to you and get involved. Williamson County is a great place to live, to work, to worship and raise a family ... get involved and ensure that those behind-the-scenes details are always met.”

After an official start earlier this year, the Mack Hatcher Northwest Extension project is well underway.