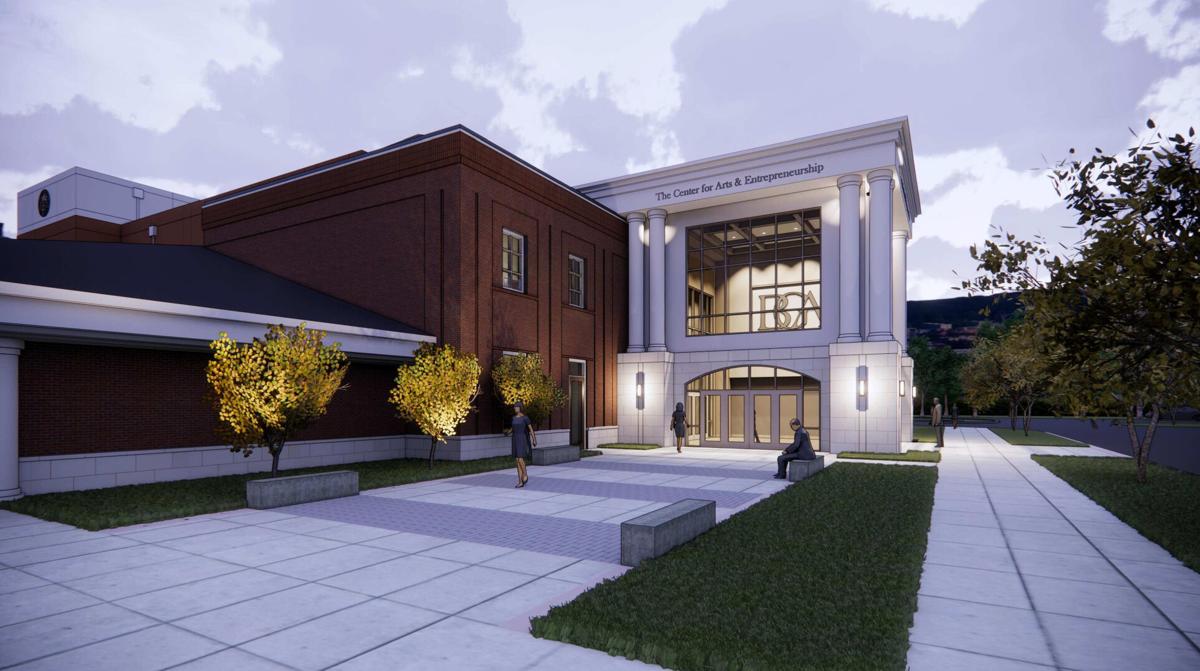 The Sondra Morris & Robert N. Moore Jr. ’52 Center for Arts and Entrepreneurship represents an influential change at Battle Ground Academy, according to Head of School Will Kesler. 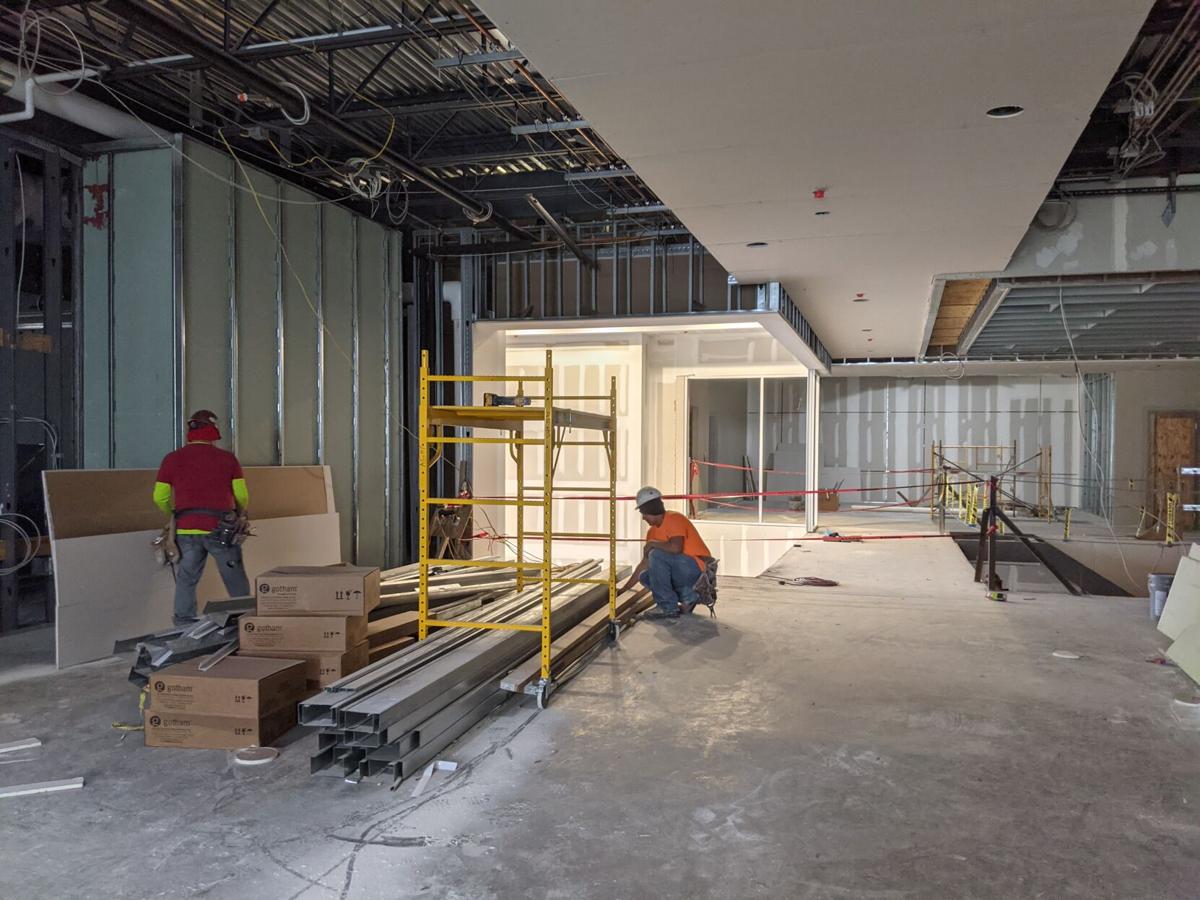 A construction crew works on completing the second story of the Center for Arts and Entrepreneurship at Battle Ground Academy. 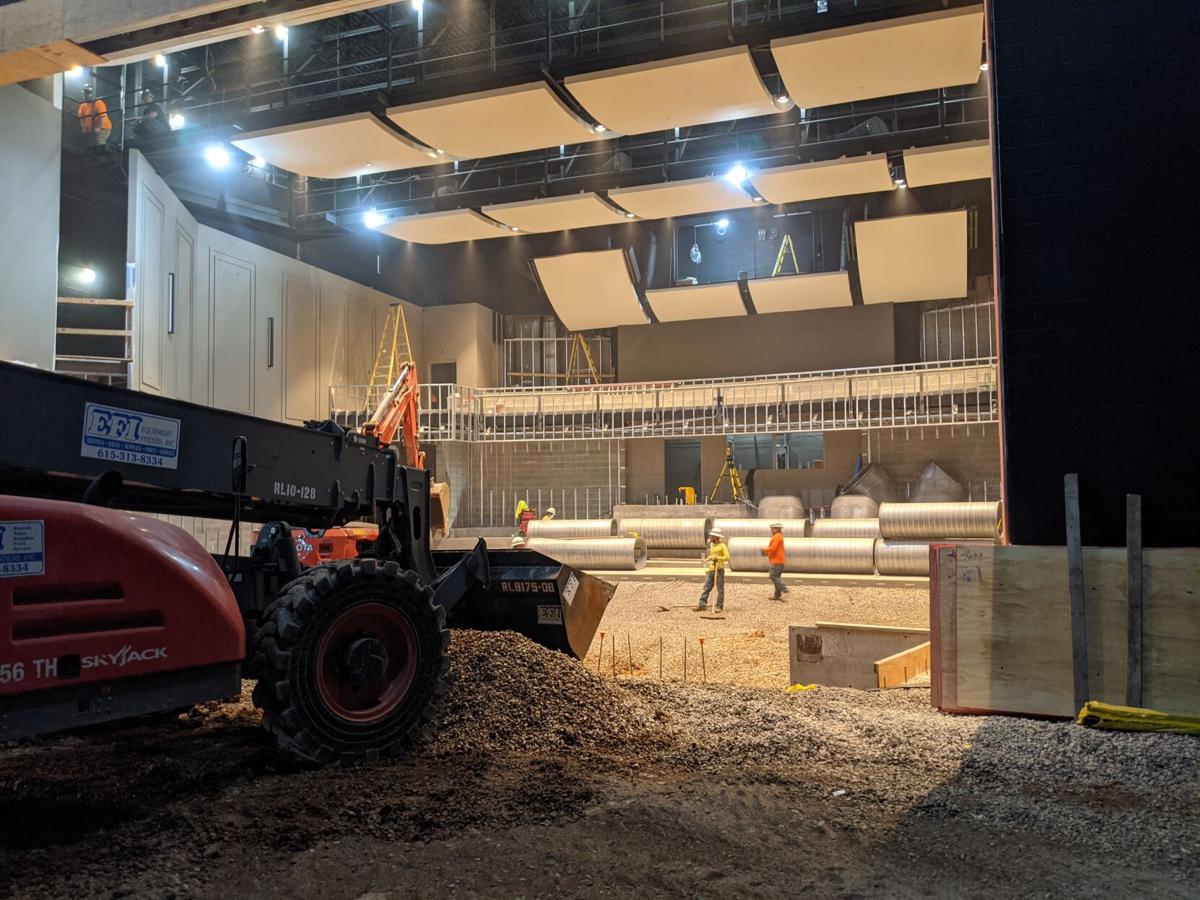 BGA Head of School Will Kesler, looking out from what will be the stage, emphasized the intimacy of the auditorium. 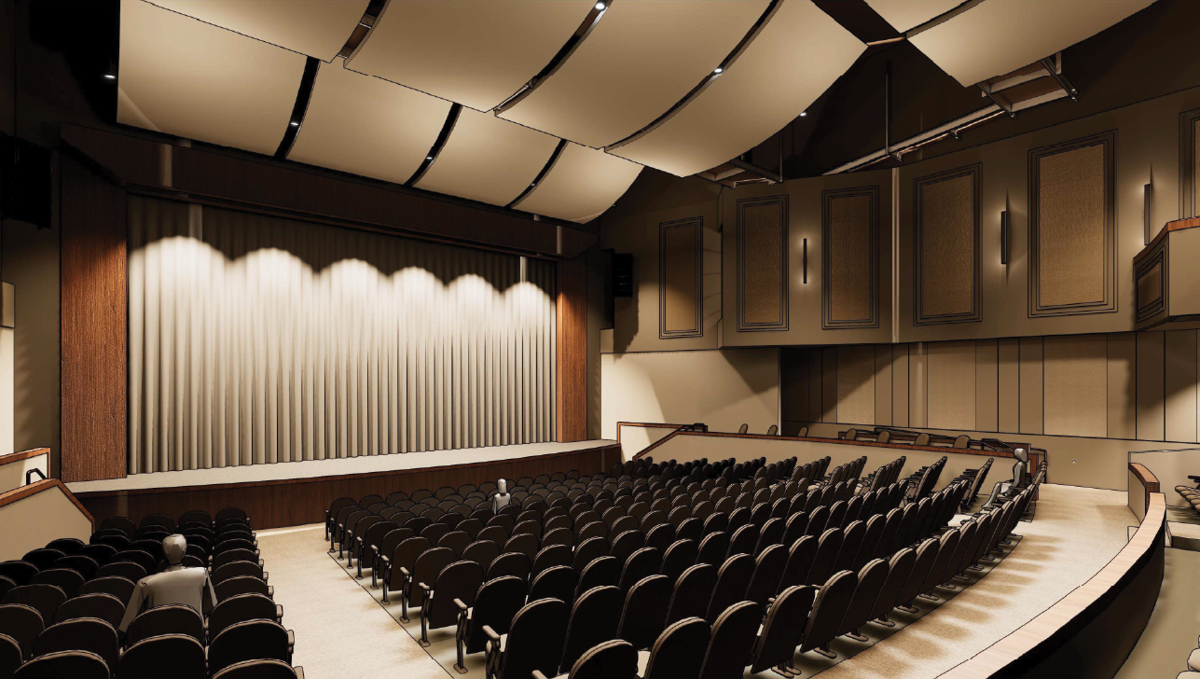 The auditorium in the new building will seat 550 people. 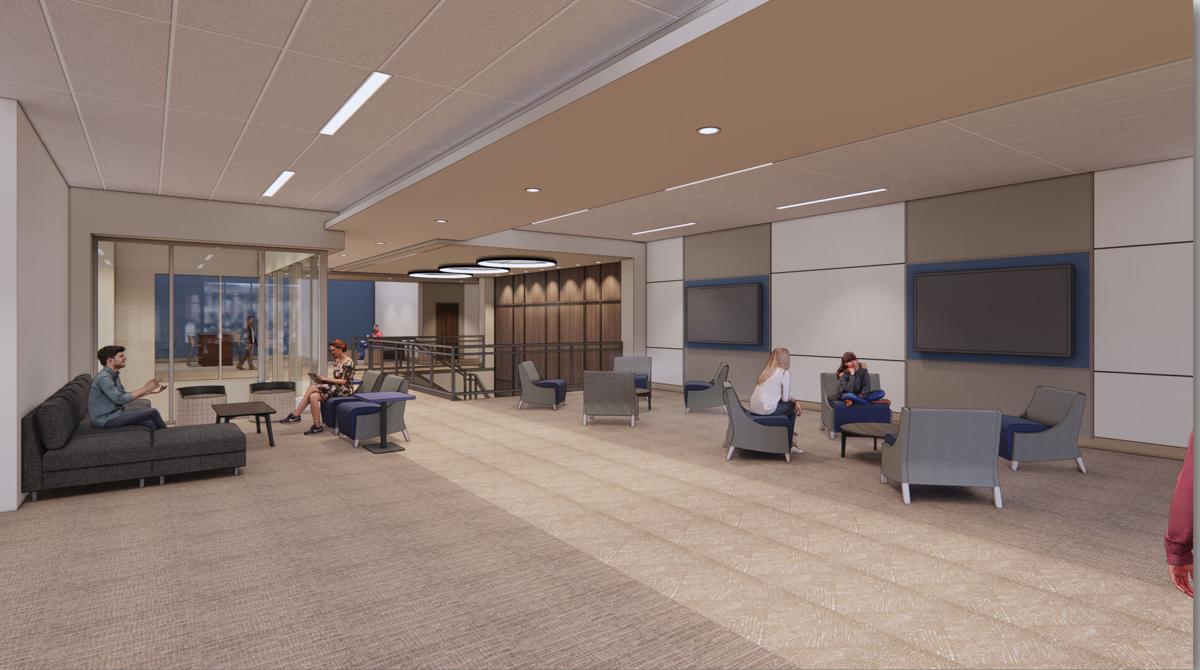 The new, nearly 44,000-square-foot entrepreneurship building is set for an early March 2021 opening. 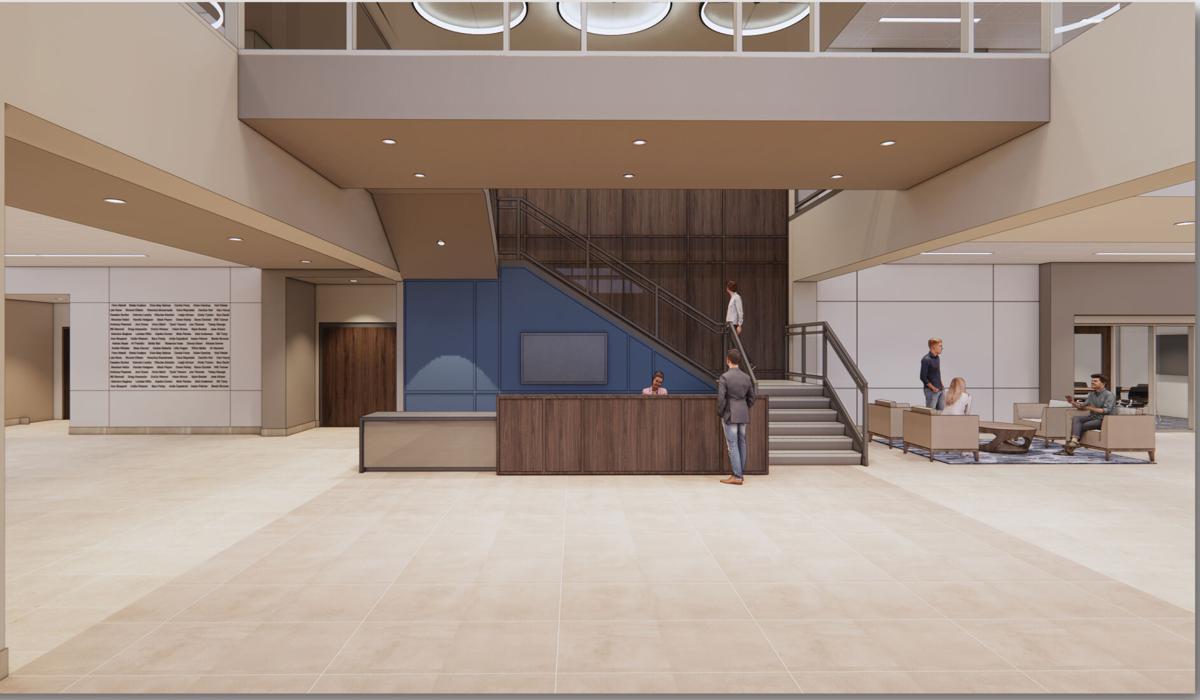 The first-floor lobby of the new entrepreneurship center at BGA will feature high ceilings to showcase the work being accomplished on both stories of the building.

The Sondra Morris & Robert N. Moore Jr. ’52 Center for Arts and Entrepreneurship at Battle Ground Academy is almost ready for its first students, though it may not look like it yet.

In late 2019, BGA broke ground at the northwest corner of its campus to build a new home for its entrepreneurship and performing arts programs. In late March, the school hopes to transition its classes into the new space.

While a construction team is still working away inside the walls with beeping yellow vehicles and heavy tools, the grand structure of the building is there — a two-story ceiling at the entrance showcasing a bridge that connects the two sides of the second story towering over a grand hallway meant to foster collaboration below.

BGA Head of School Will Kesler said the substantial 43,800-square-foot building is meant to reflect the “dramatic nature” of the work within.

“We really tried to provide the scaffolding for the skills that we want in the program,” he said, pointing out where classrooms, breakout rooms to be fitted with recording and presentation equipment, a maker’s space, an area for a board room setup, an open space for a “Shark Tank” kind of pitching event, and even a corner for a coffee shop will be located.

The school already has an entrepreneurial learning program in place. The school has a four-year program where students learn about leadership, Lean LaunchPad methodology, economics, social entrepreneurship and other business skills. Students also have the opportunity to take an entrepreneurship capstone course, where they learn through a more hands-on approach, overseen by the school’s Director of Entrepreneurial Leadership Hallie Heiter.

“In the first semester, the model is that the students work directly with entrepreneurs, helping them solve a critical question that they’re facing at that time,” Heiter said. “In the second semester, we flip the script, and they work on their own ventures, so every student has to pitch an idea, and then all the students vote on those ideas, and the best ideas rise to the top.”

The students work with their teachers and entrepreneurial mentors to launch their ideas throughout that semester and learn not only things like prototyping and managing a team but the legal side of business as well, such as trademark and copyright.

Heiter said about 30 students participate in the capstone class any given year, and about 100 participate annually in entrepreneurial learning in general — about one in three BGA secondary students.

While the program will not drastically change upon the building’s completion, Kesler said he hopes the building becomes a space for what already exists at BGA and allows for the growth of the program in the future as students have new needs or seek new opportunities.

One idea is to have a consistent schedule of visiting entrepreneurs. There’s even a dedicated office space for such visitors already.

“We’re looking to provide for the students who are here at a really, really high level,” he said. “If that’s attractive to prospective families, that’s great, but that’s secondary to how do we provide the best education we possibly can.”

However, the new building isn’t all about business. The new space is built into the former fine arts building on the campus and will include a 550-seat auditorium not only for speeches, presentations and conferences, but also for theatrical performance, concerts and other artistic productions.

While the auditorium seats more than the Franklin Theatre, Kesler emphasized the intimacy of the venue, saying the distance from the stage to the farthest seat in the balcony is shorter than that of the cafeteria, where school productions are currently held.

The maker’s space, located just behind the stage, is what ties the whole building together, as it will be utilized by creatives of all kinds on campus. Students will be able to use the space for prototypes, computer science, robotics, set design and more.

For Kesler, this was the next natural step for the entrepreneurship and performing arts programs, and at the same time, he said the building represents “one of the most influential changes” at BGA of the last decade.

“We started with a really small bet about five, six years ago, and as we’ve seen [the entrepreneurial learning program] blossom and grow, we realize that the next logical step was we need the resources and availability, and the same thing with our performing arts,” he said.