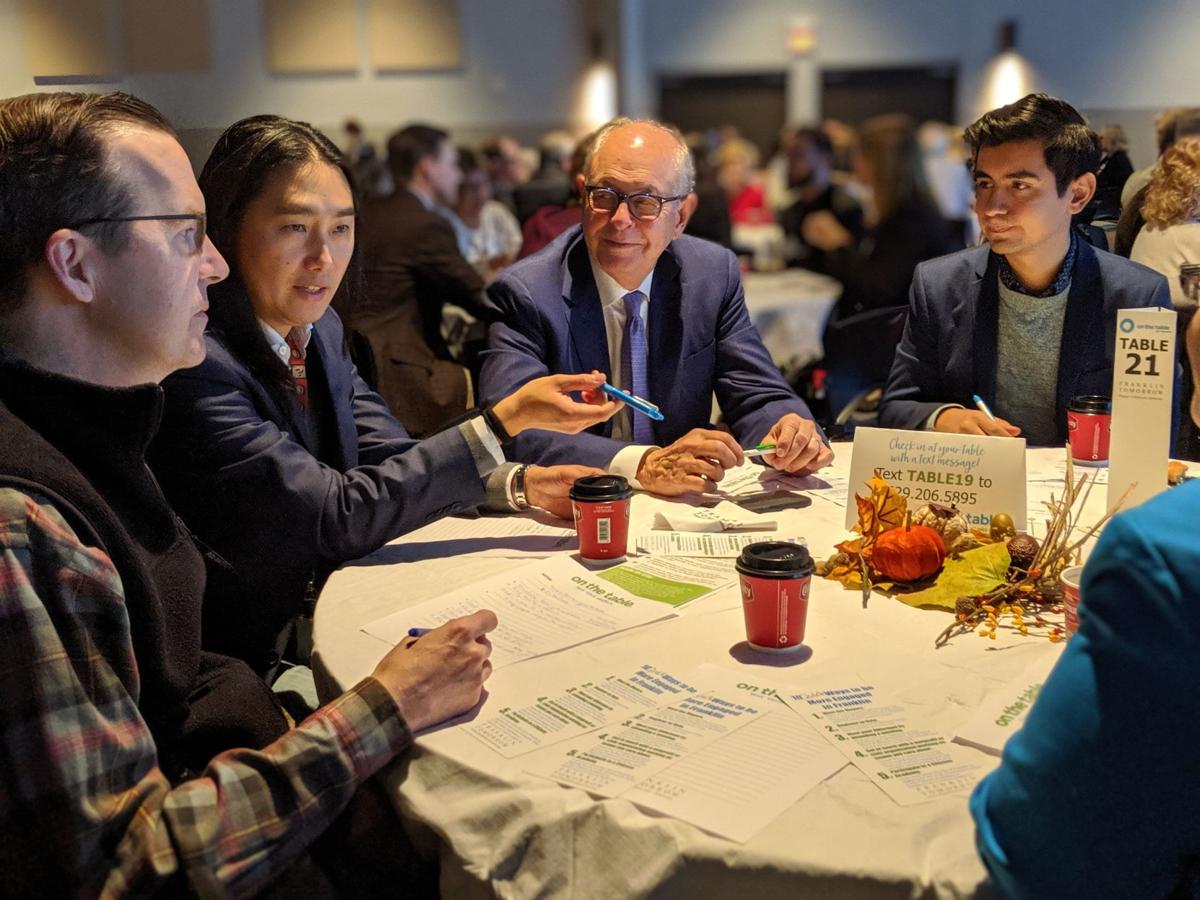 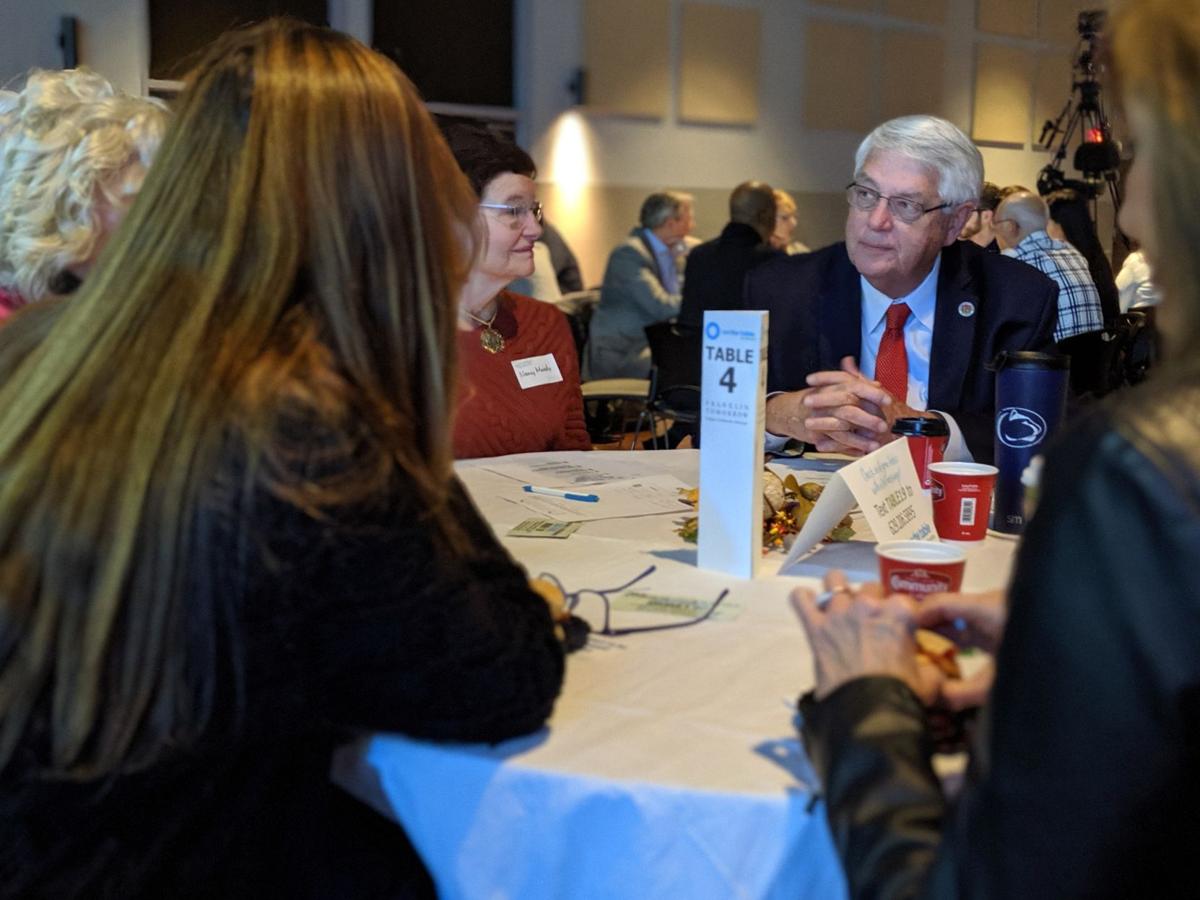 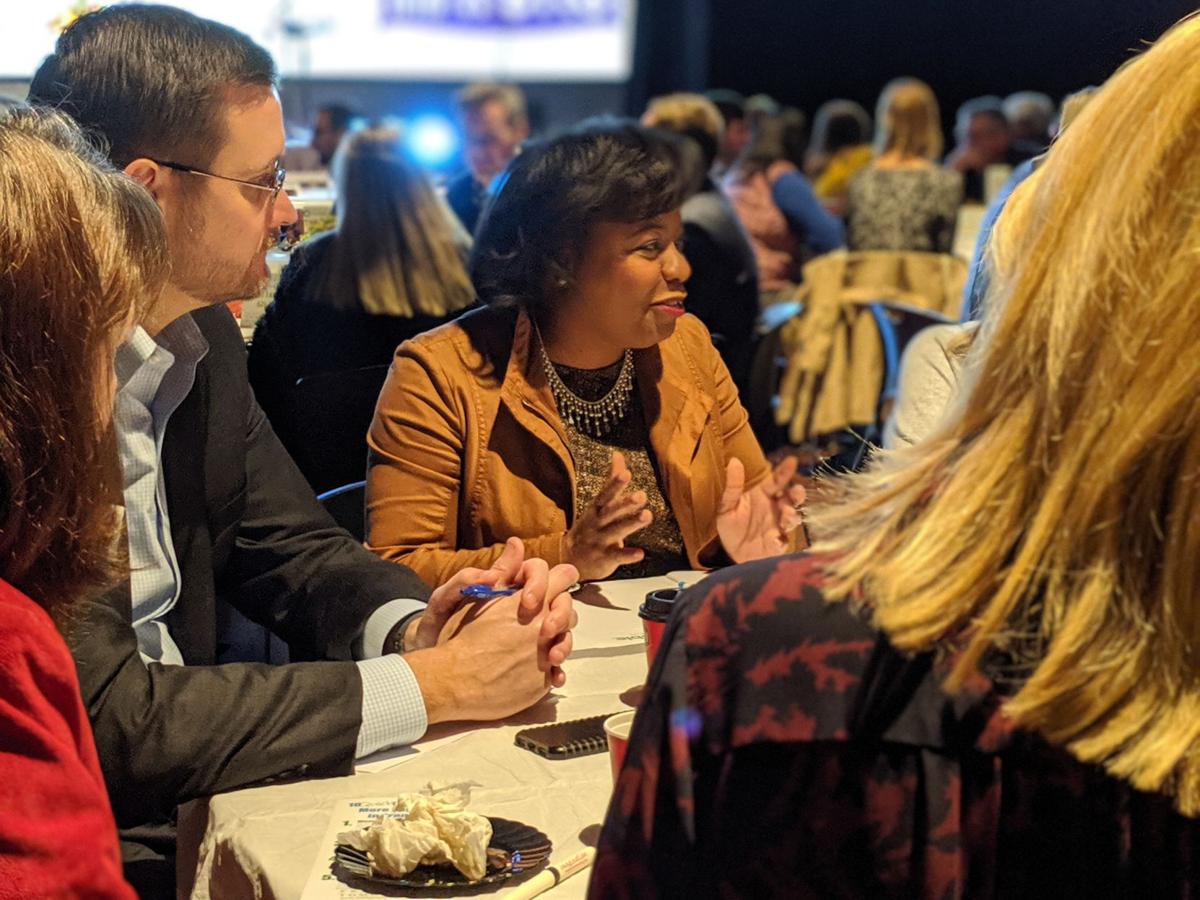 Allena Bell, chairman of the Franklin Tomorrow board, leads a discussion at her table. 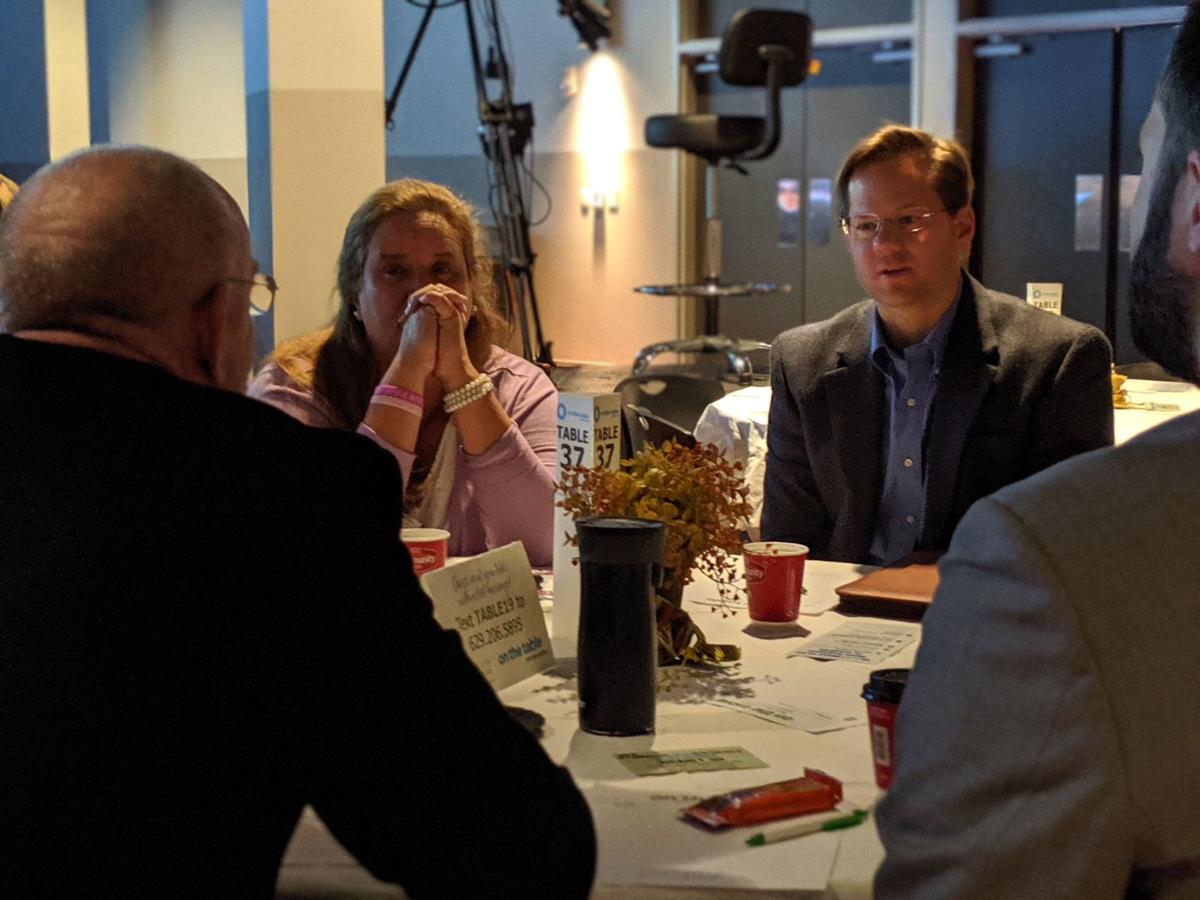 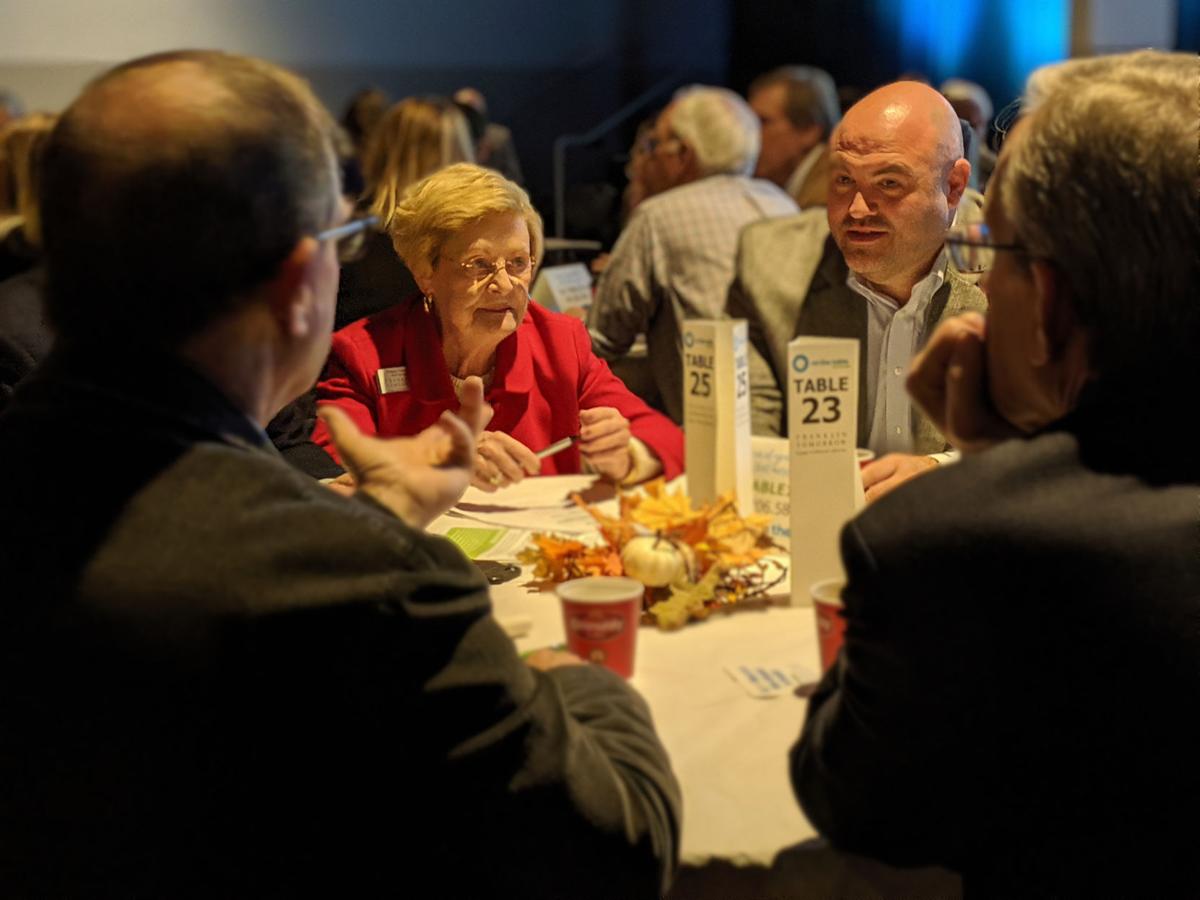 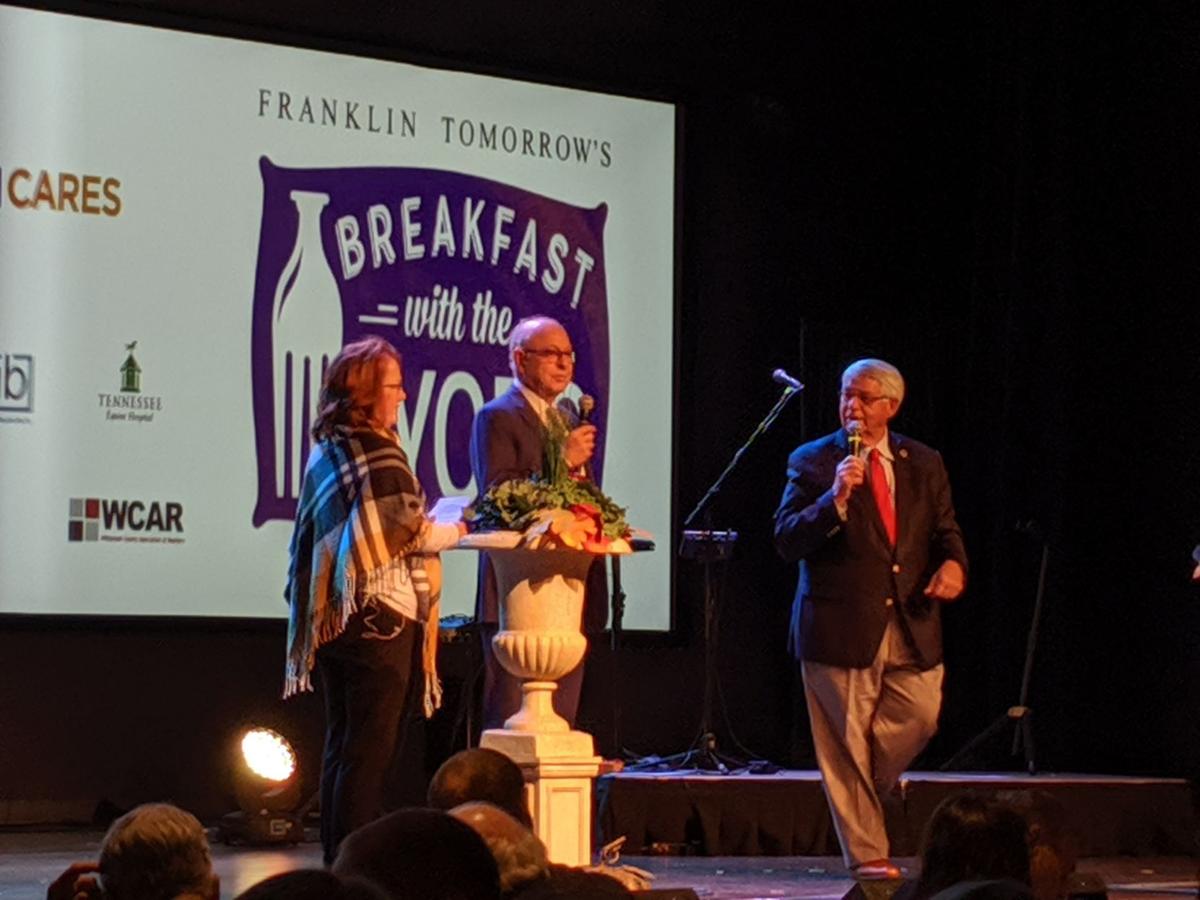 Allena Bell, chairman of the Franklin Tomorrow board, leads a discussion at her table.

Every person has something to bring to the table, and Franklin Tomorrow is giving residents the opportunity to make their voices heard with its second annual On the Table initiative.

Nearly 300 Franklin residents registered for the first of a series of 10 On the Table events, which was last week at Rolling Hills Community Church, where about 50 tables awaited the conversations they would bring.

Since it was held at the same time and place as Franklin Tomorrow’s quarterly Breakfast With the Mayors event, both Franklin Mayor Ken Moore and Williamson County Mayor Rogers Anderson were there and were ready to discuss matters pertaining to the city.

Each table had an appointed leader to lead the conversation among groups of eight or less, offering prompts such as, “What do you say when you brag about Franklin?” and “In what areas could Franklin improve?”

Bob Wilkins, a recruiter for the United States Census Bureau, said that he is proud of the city’s activity level. He said that there’s always something going on, so residents can be as involved as they want to be.

Angelique Franzoni, an accounts payable specialist for the city, said that city officials do a good job of involving the community in projects and decisions.

“When our planning department has (something) coming up, they want input from the community, they have events at City Hall,” she said. “They’ll put a board up and say, ‘What concept do you think works the best, and what is your input?’ We spend a lot of time and energy in trying to plan what makes sense.”

While problems with infrastructure is a problem for cities nationwide, Wilkins said that Franklin has the benefit of time when it comes to planning for growth.

“We’ve become a little more sophisticated in our planning of what we expect in a community as opposed to (Los Angeles) that grew up in the beginning of the last century and just grew,” he said. “At that time, there weren’t many controls, there wasn’t much thought to down the road, which was probably normal.”

Wilkins said that population trends and projections help growing cities such as Franklin plan ahead.

Of course, some brought up the city’s education and small-business sectors as bragging points, mentioning that Franklin tends to be forward-thinking. Franzoni said that the county school district’s Entrepreneurship and Innovation Center near Franklin High School and a similar entrepreneurship program at Battle Ground Academy are examples of this progressive mindset.

When the conversation turned to areas for improvement, infrastructure again rose to the top.

Michael Young, who is budget and strategic innovation manager for the city, said that a lack of downtown parking spaces is a problem. He said that the paid lots that are cropping up downtown are private lots, belonging to businesses or churches, while parking in city lots is free.

However, he said the time limit associated with free-parking spots during the day has been a contentious issue with the city. He said that signage has flip-flopped between two-hour and four-hour limits. Currently, there are two-hour, four-hour and 24-hour parking spots scattered throughout the downtown area.

“I think we really have to look at the next growing generation of people — people in their 30s going into their 40s,” he said. “Those are going to be the families 20 years from now sitting around the table, and we need to invite those people here. We need to make a reason for them to come to Franklin.”

Franklin Tomorrow’s series of On the Table events will end with Engage Franklin on Saturday. To learn more about On the Table, visit franklintomorrow.org.