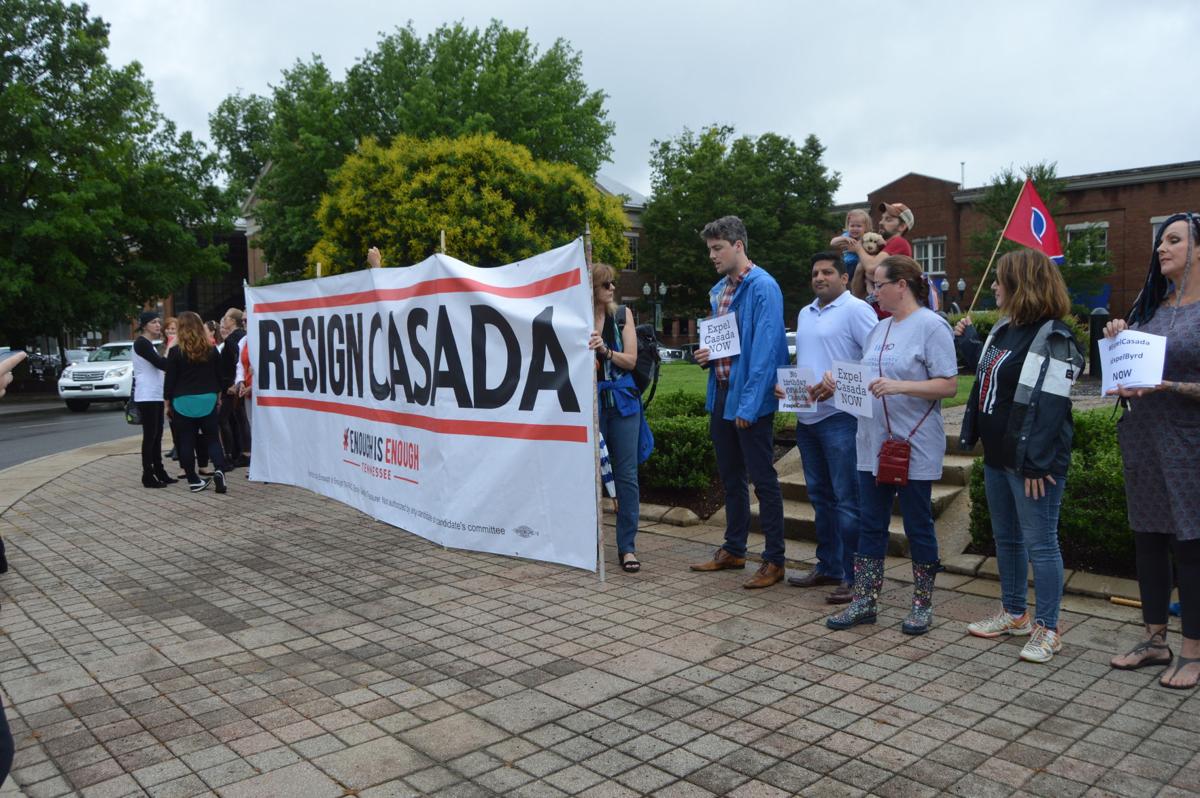 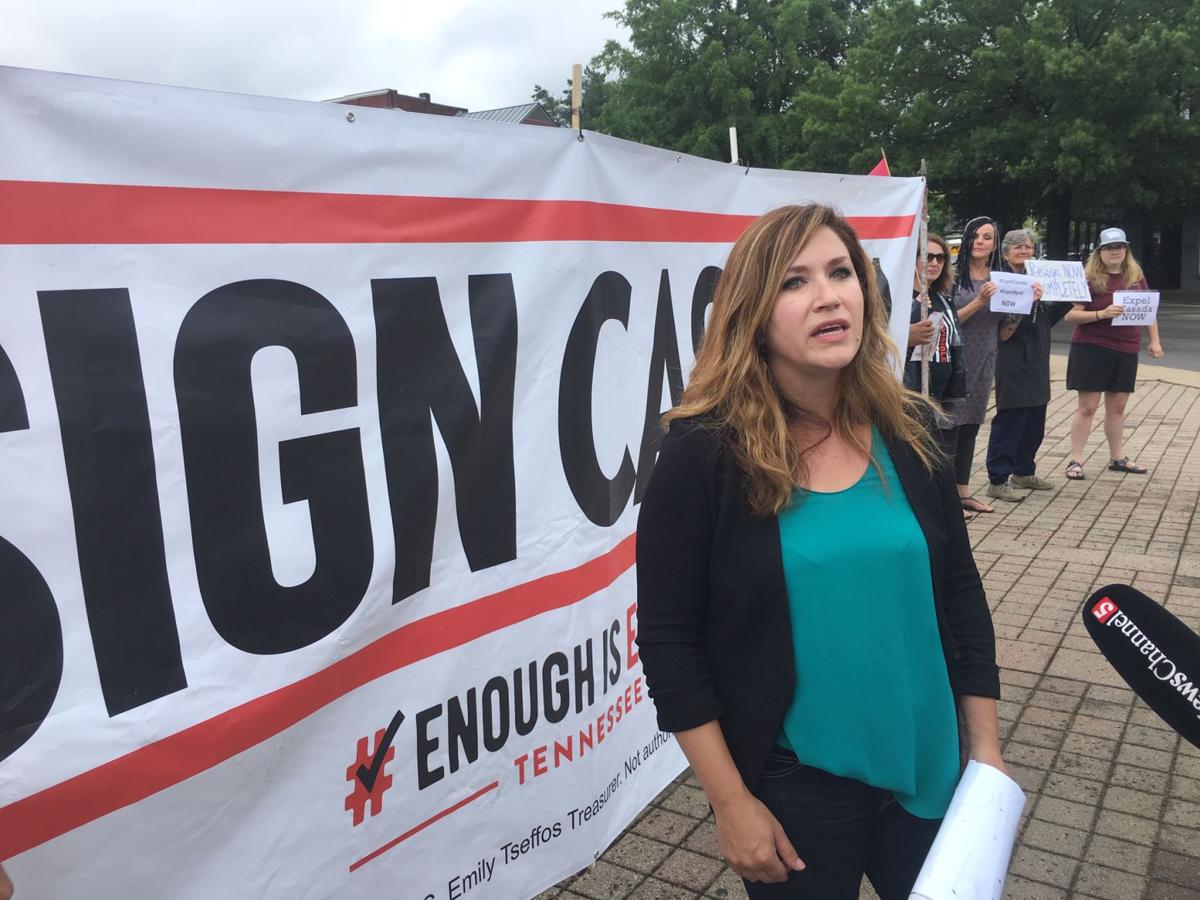 Michele Bewley of Indivisible TN 7 led a press conference calling for Rep. Glen Casada to step down from his 63 rd District seat in the Tennessee House of Representatives. 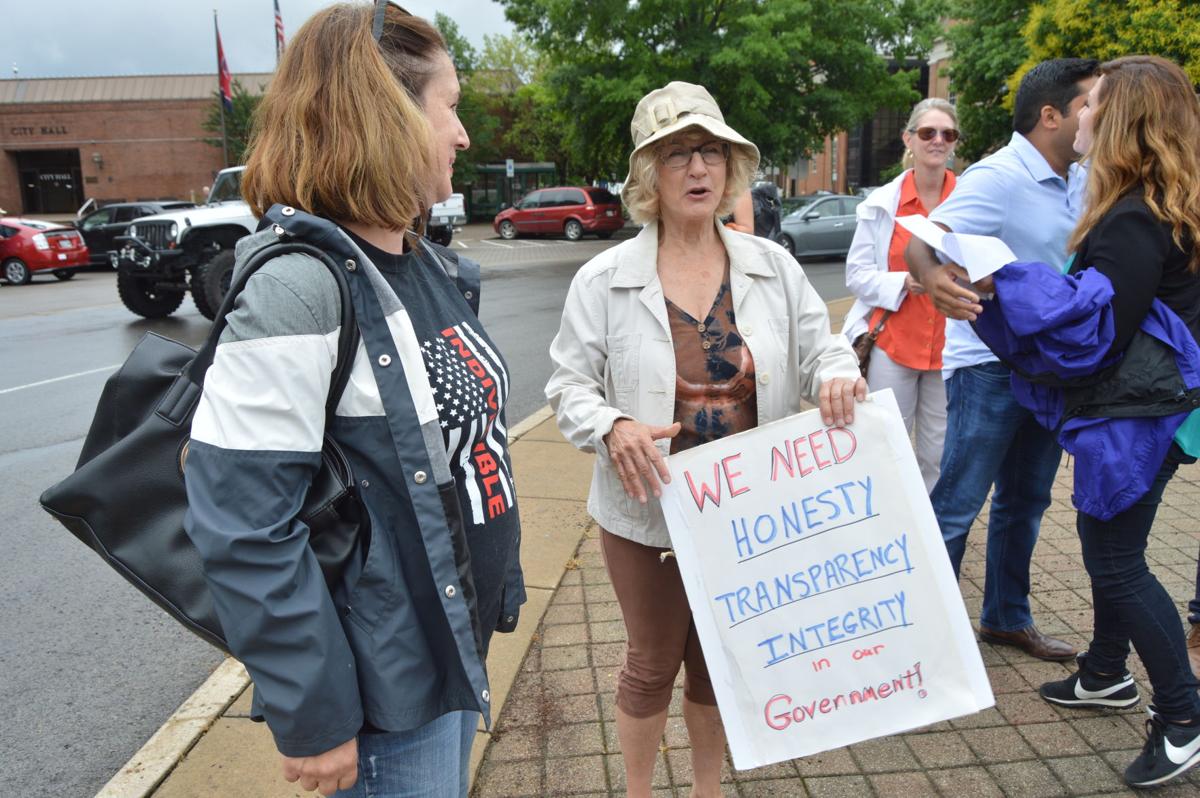 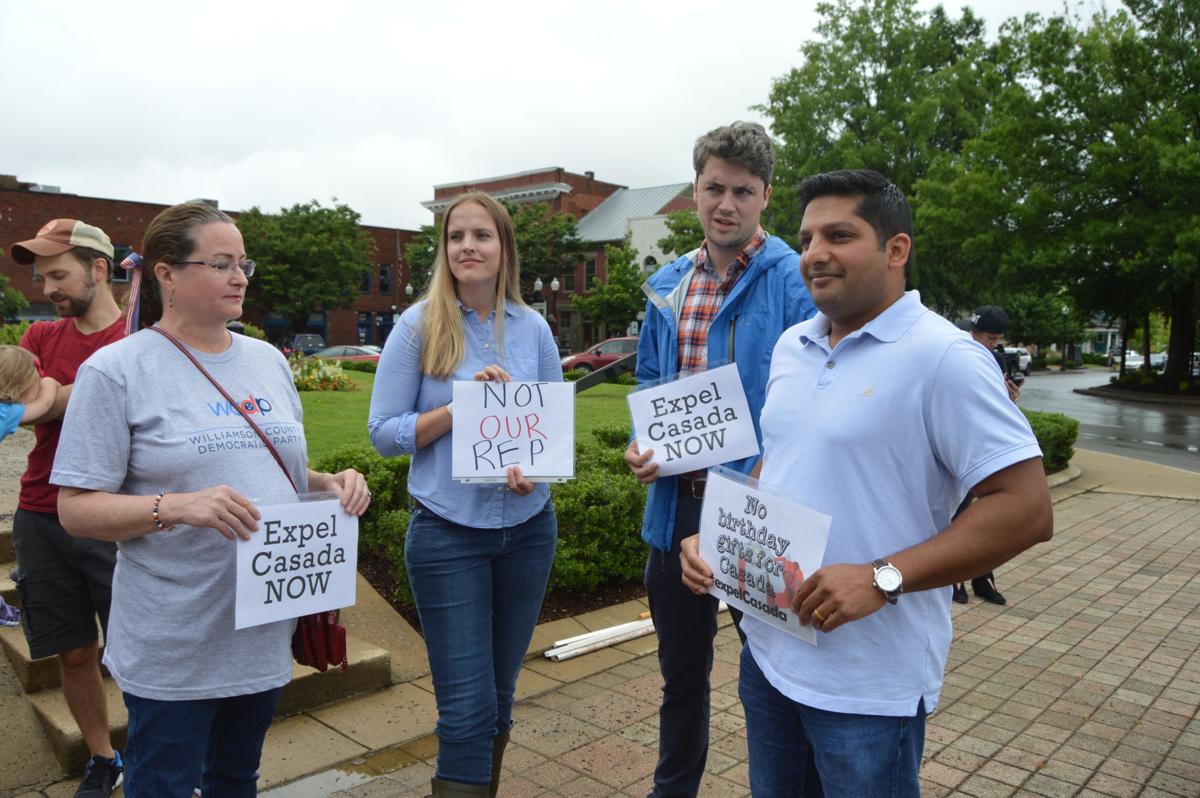 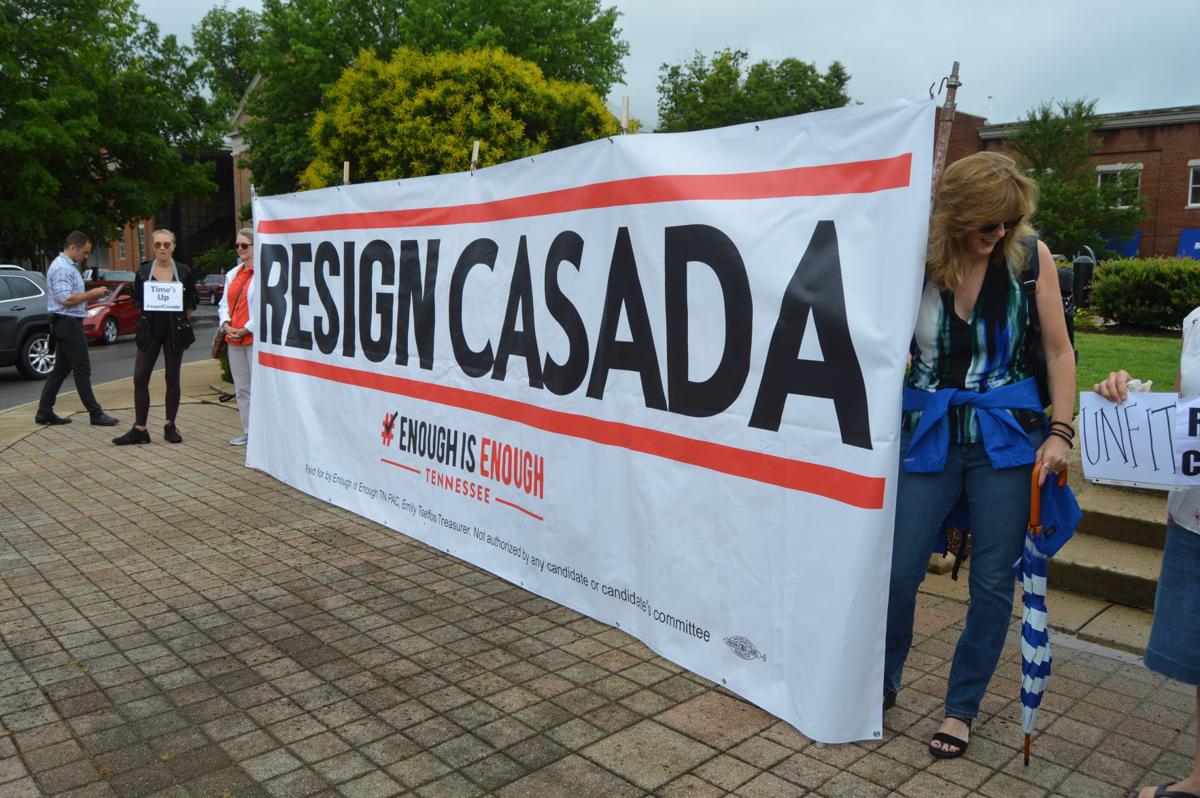 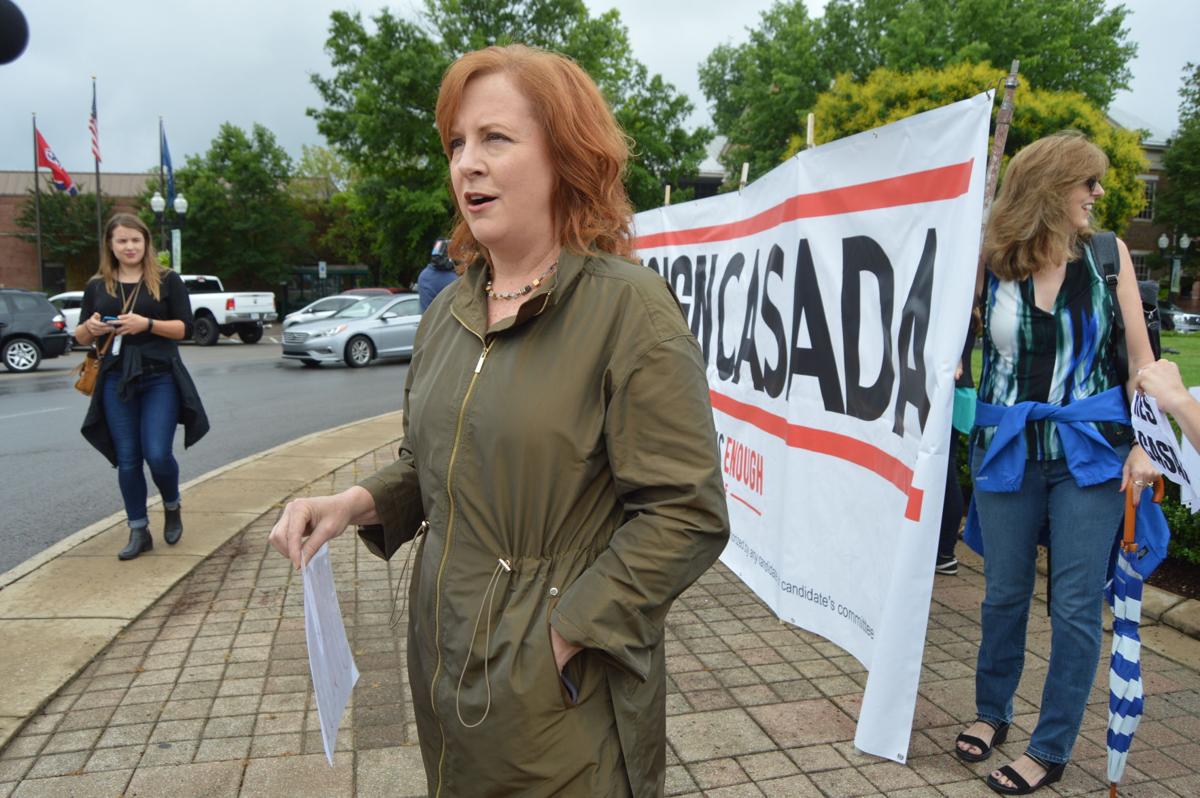 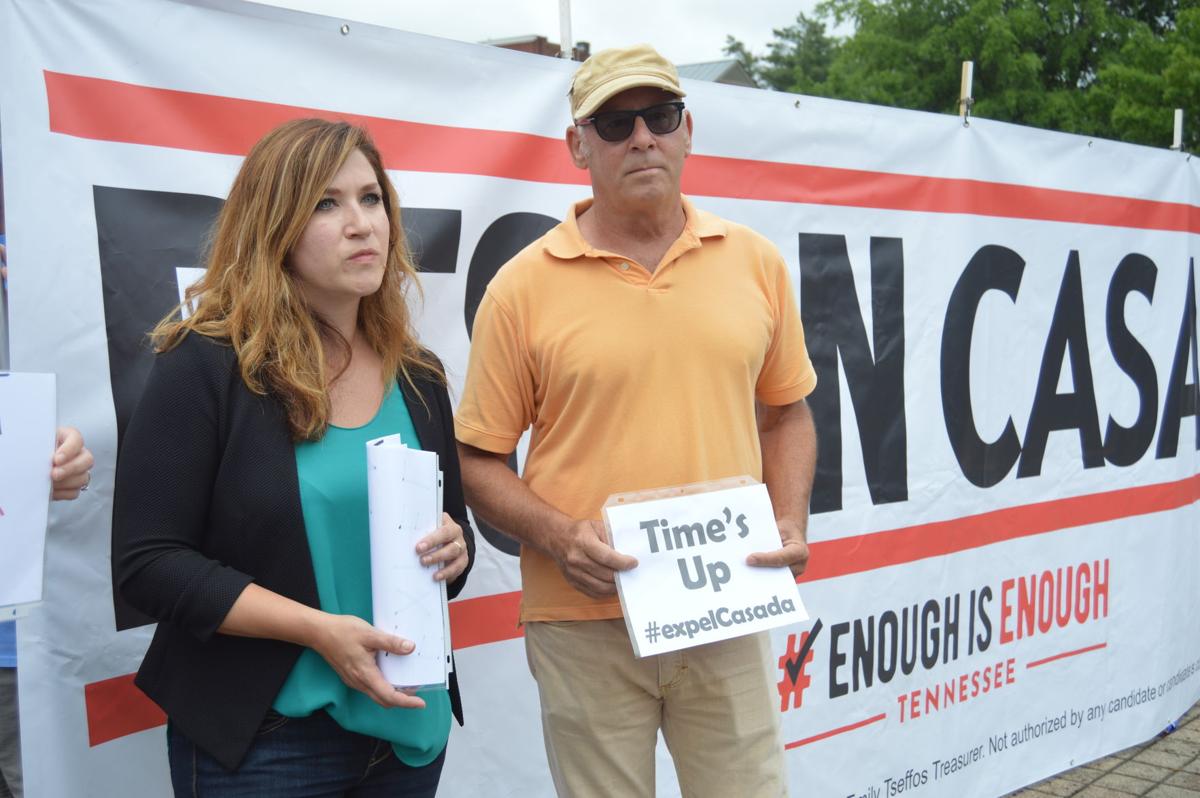 Michele Bewley of Indivisible TN 7 led a press conference calling for Rep. Glen Casada to step down from his 63 rd District seat in the Tennessee House of Representatives.

A group of Williamson County residents and some activists gathered at the highly visible Franklin Public Square to deliver a clear, collective message to area constituents – that Rep. Glen Casada, who recently agreed to step down as House speaker, should go a step further and resign from his 63rd District seat on the Tennessee House of Representatives.

After sexually explicit text messages surfaced as reported by The Tennessean, including Casada’s lewd comments about women, the House Republican Caucus cast a secret-ballot vote, 45-24, of “no confidence” against Casada May 20 during a three-hour special session at an undisclosed location.

After many of his Republican peers, including Rep. Sam Whitson, R-Franklin, called for him to step down, Casada agreed to relinquish his position as House speaker, Aug. 2, but says he plans to stay in his 63rd District seat, which he was elected to serve in November.

According to Whitson, there has not been heavy momentum among House Republicans to remove Casada from his 63rd seat altogether, just a commitment to elect a new House speaker.

However, some constituents, who gathered on Public Square in Franklin Friday think differently and are calling for him to resign from his 63rd House seat.

On Friday, Michele Bewley, chair of Williamson County-based Indivisible TN 7 and organizer of the event, directed the unveiling of a 17-foot banner, labeled with the simple directive in large black letters, “Resign Casada.” Approximately 20 Williamson County residents from its various cities gathered around the sign, while Bewley led a press conference.

“His constituents have a voice. They need leadership. They need someone to advocate for them,” Bewley said.

“They have the responsibility to hold their elected officials accountable. He hasn’t been representing us and our voices have been absent. His Republican colleagues don’t have confidence in his leadership.”

Bewley said that Public Square was chosen as the group’s gathering spot to raise awareness among area constituents about Casada’s recent controversy.

“It’s important for us to make sure that his constituents, as many as possible, are aware of what’s going on,” Bewley said.

“People aren’t reading the local papers and aren’t tuning into the local news and might be unaware of what’s going on. We want to make sure that someone driving by might be compelled to say, ‘What’s going on?’”

Bewley also said constituents should pay more attention to the leaders they elect.

Lori Clemons of Thompson’s Station, who previously ran for a seat on the county commission, said that she believes Casada is "unfit to serve."

“He does not represent us. He is only in it for himself. It’s a distraction and embarrassment for Tennessee,” Clemons said. “He ran on Christian values, and this is not Christian at all. We can’t stand by him anymore.”

Previous 61st District candidate Rebecca Purington, a Democrat, agrees that he should no longer hold his seat in the 63rd District.

"He needs to step down now," she said. "The best thing for him to do is not to have taxpayers incur $41,000 a day to have a special session when he can just simply resign."

Purington said that she believes the House speaker should demonstrate leadership and ethical behavior, unlike what she has seen from Casada over the past few months.

Although any House member could call for Casada's removal if a special session is called, Casada recently explained to the Herald that other House members have done worse things, which have not led to their removal.

“We have a member who was disciplined by the ethics committee for sexually inappropriate conduct, and other existing House members (in both parties), about five off the top of my head, who have done far more egregious things than send a couple of text messages 3 ½ years ago,” Casada said.

Although some constituents might hold the same view, Casada’s peers’ “no confidence” vote spoke loud and clear, sending the message that most caucus members have lost confidence in his ability to lead the state House.

Casada announced his intent to resign August 2 at 8 a.m. by official letter to House members. In the same letter, he requested that the governor call a special session that day, but he has gotten pushback from some House representatives and constituents, who are calling for him to resign as House speaker in June.

“I am still advocating that he resign immediately as speaker,” Whitson said.

"Glen's decision to keep his speaker seat until August is not acceptable to the majority of the House Republican Caucus. For the best interest of the caucus, the General Assembly and the state of Tennessee, Glen needs to step aside from his speaker duties now. There is no need to hold a special session to select a speaker.

"Bill Dunn, as our Speaker Pro Tempore, can serve in Glen's place until we elect a new speaker just prior to our next session in January 2020. This will not only save the state money, but allows a constitutional solution rather than a political maneuver to restore trust in our legislature. We may not have a say in who we serve with, but we do have a say who leads us in the House of Representatives."

Williamson County resident of 40 years Cora Wiser said she wanted a leader she could respect.

“We have to hold people we elect to be leaders, leaders we can respect. If they aren’t leading, they need to get out of there,” she said.

State Representative Glen Casada will not run unopposed in the 2020 election, as Williamson County School Board of Education member Brad Fiscu…

Some Residents may be Democrats. I don't have a problem with Glen. He should stay where he is.