The Williamson County Board of Commissioners approved a resolution Monday opposing proposed state legislation that, if passed, could negatively impact the profitability of county-owned Williamson Medical Center.

Williamson County Attorney Jeff Moseley said legislation was introduced in the last session of the Tennessee General Assembly that would adjust the certificate of need requirements for health care facilities. Additionally, the Health Services and Development Agency authorization is set to expire this year unless authorized again. If left to expire, the certificate of need (CON) requirements would go away altogether.

The CON requirements essentially force certain health care facilities to show a particular area needs its services for the sake of resource allocation.

“The idea is to avoid duplication or over-utilization within an area, which could harm the provision of services in a particular community,” Moseley said during the county budget committee meeting last week.

The proposed legislation from last session would allow Williamson County to be looped into those where ambulatory surgery centers or outpatient diagnostic centers could go without a CON.

“The problem with that is that outpatient services are by and large the profitable services in the health care facility, and those providers would not be required to provide other services that the hospital has to provide by federal law and by state law,” Moseley said.

Thus, if that legislation were to pass and change the CON requirements, Williamson Medical Center could be faced with competition from new, differently regulated health care service centers in the area that could threaten the services that Williamson Medical Chief Operating Officer Julie Miller said makes up 70% of the hospital’s revenue. Additionally, those ambulatory surgery centers or outpatient diagnostic centers likely would not provide all the services of a hospital.

The commission voted 21-3 for a resolution that would let the Tennessee General Assembly know that Williamson County opposes changes to or the expiration of the current CON regulations. District 8 Commissioner Barbara Sturgeon and District 4 commissioners Gregg Lawrence and Chad Story voted against the resolution.

“It seems to me like this is an effort to eliminate competition, and in my line of thinking, competition usually increases the quality of services and lowers the price for the consumer,” Sturgeon said. “I’m concerned about the consumer — our residents — having more choice and higher quality services, because that’s usually what happens with competition.”

Moseley said hospitals don’t operate in a free market in the same way as other businesses, echoing the resolution itself.

“Community hospitals operate in a highly regulated market and do not enjoy the freedoms of a free market due to federal regulation and market dominance by insurance companies,” the resolution reads.

Lawrence voiced his opposition to the resolution, saying businesses “have to deal with the changes in the marketplace, and competition is part of that.”

“This has been a very difficult year for most employers. There are a lot of small employers that are struggling to be able to provide health insurance for their employees, and the cost of health care, of course, is directly related to how much insurance costs,” he said. “So, I think we definitely need as much competition as possible to keep the cost down.”

District 5 Commissioner Beth Lothers supported the resolution because she believes it's in the best interest for the community.

“It appears that we’re really trying to, again, have the profitable services offset the unprofitable services,” she said. “Being a public hospital where there’s a regulatory climate, I view this as protecting the financial viability for the good services our residents receive.”

Read the full resolution below. 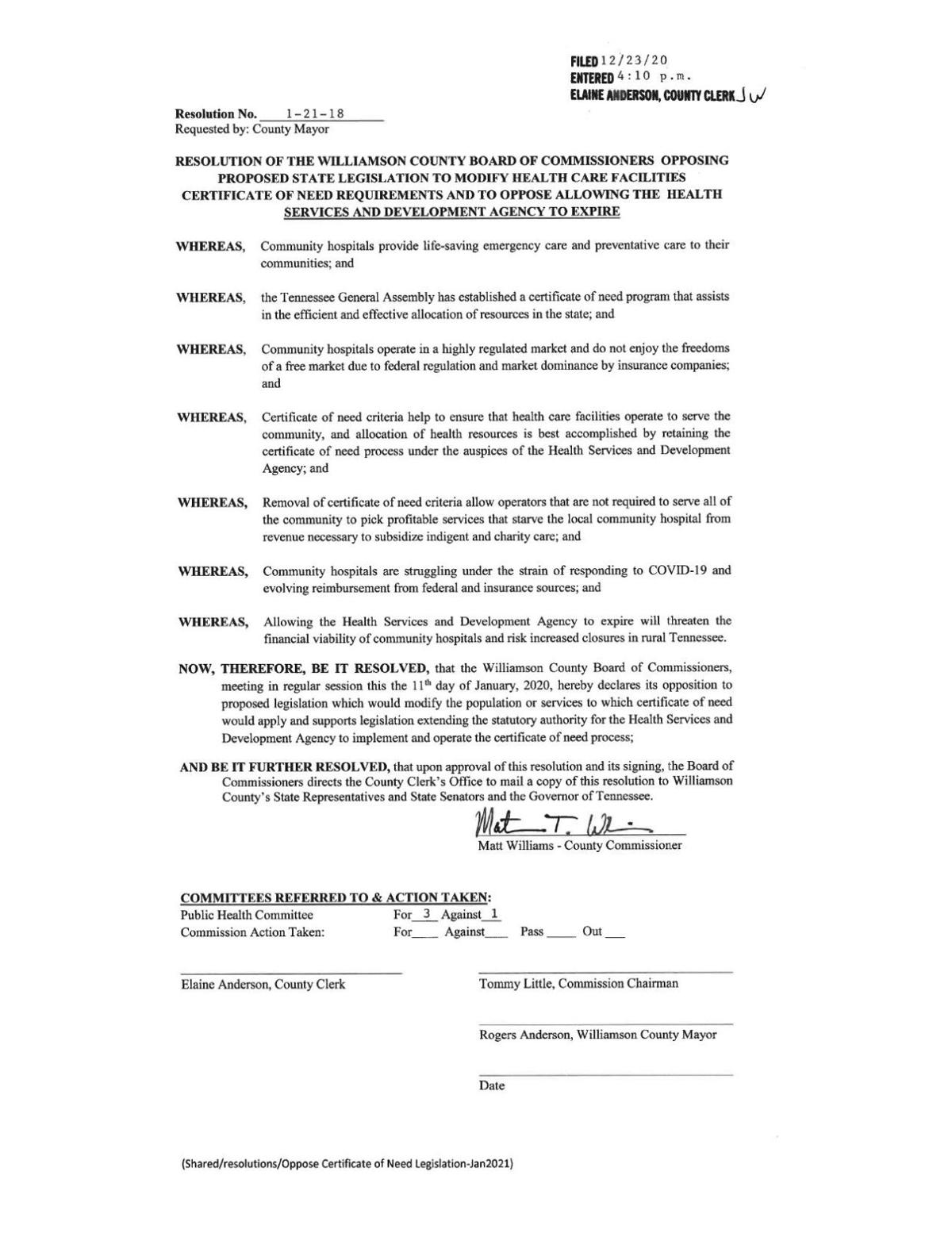 While I agree that the medical industry is not the 'normal' free market, but a highly regulated one, the fact is that these three commissioners are correct about competition. It makes every industry stronger - look no further than Davidson County.. However, the Williamson County Commission missed the opportunity to allow competition in the medical industry of Williamson County many years ago and taxpayers are feeling the crunch. As a result of our growth and demand for medical services, the commission has created a taxpayer subsidized behemoth in WMC. And right on cue, once every 3 to 5 years our commissioners fight another battle against competition for WMC. It's a battle that is NOT going away and the more the commission subsidizes WMC the more taxpayers stand to lose at some point in the future when this vote goes the other way. SO, it's time for our commission to provide the taxpayers with a permanent solution to this cloud on the horizon, and it is NOT more taxpayer bonding! It may not be a politically popular decision as WMC is likely the strongest lobby in the county, but tough decisions need to be made now. The 'protectionist' mentality of most W.Co. commissioners won't serve their constituents well in the future.