After more than 3 1/2 hours of discussion, the Williamson County Board of Commissioners voted to form a task force to determine whether or not there is “substantial need” to alter the Williamson County seal, which has been the subject of recent controversy due to the Confederate battle flag included in its upper-left corner.

Over the last several weeks, the county commissioners have received many emails from constituents voicing their opinions on the flag in the seal — some want the flag removed, some want it to stay and others want the seal completely changed or abolished altogether.

The seal was adopted in 1968 and features quadrants meant to represent the county — the Confederate flag and battle cannon to represent history, a lamp for education, a stained-glass window and Bible for religion, and a cow and horse for agriculture.

A resolution drafted in Williamson County Mayor Rogers Anderson’s office, sponsored by commissioners Brian Beathard (District 11), Chas Morton (District 9), Keith Hudson (District 3), Betsy Hester (District 2) and Paul Webb (District 6), called for the formation of a nine-member task force to receive public input, determine whether there is a need to alter the seal, and study the various community impacts of such an alteration, reporting this information to the commission in September. The following members are to comprise the task force.

• One representative of Williamson, Inc., who shall serve as the chair

• One representative of the Heritage Foundation of Williamson County

• One representative of the African American Heritage Society

• One African American business owner or manager, or educational professional

• One representative of the Williamson County Convention and Visitors Bureau

At the beginning of the commission’s conversation, Hudson said he wanted to share his personal perspective of the flag on the seal as an African American man, as the commissioners’ peer, and as a father. He said he has told his son to steer clear of cars or businesses waving the Confederate flag because “we don’t want any trouble.”

“For me and for a lot of people that look like me, it’s the same as a swastika. It has a similar meaning,” he said.

He said sometimes the flag is a symbol of hate, and other times people say it represents heritage, but there’s no way to know.

A few other commissioners shared their opinions on the matter in June. District 6 Commissioner Erin Nations said Civil War history, including the Confederate flag, and sites draw tourists to the county.

“This is part of what makes Williamson County such an incredibly unique place, and I am not willing to be a part of the effort to erase that history,” she said.

Morton said he believes, while the Confederate flag has a place, it is not on the county seal.

“I simply cannot support or condone this as the representation of Williamson County’s history on its seal,” he said.

Last month spurred many community members to speak up publicly as well, not just in their commissioners’ inboxes, as residents claimed that the flag is a symbol of racism and intimidation and should be removed, that it merely represents an event in the past that we should learn from and that it isn’t appropriate on its own but should remain with an American flag added, among other opinions.

These ideas are just a few that surfaced in the commissioners’ debate.

Eight versions of the resolution considered

Not long after the resolution was tabled, commissioners proposed a slew of amendments. District 11 Commissioner Sean Aiello introduced allowing up to 20 non-specified task force members – with commission approval of the members – working with the county historian as acting chair begin work and present their determination to the commission in October instead of September.

District 9 Commissioner Matt Williams amended Aiello’s to include the original nine members as a minimum for the task force. Several commissioners expressed concern that the historian may not wish to be the chair. Both Aiello’s and Williams’ amendments failed.

District 4 Commissioner Gregg Lawrence said he believes the discussion around the seal should be deferred to another time altogether.

“There is a lot of anger and bitterness in our country right now,” he said. “It might be better to wait until things calm down a little bit in America to have this discussion when we could be maybe a little more reasonable.”

This statement did not receive much support among the commissioners, and District 10 Commissioner David Landrum presented another amendment that would limit the task force’s discussion to the upper-left quadrant of the seal, which contains the Confederate battle flag and the cannon, to “keep the integrity of the rest of the county seal.” Some commissioners expressed concern about limiting the task force’s discussion.

District 10 Commissioner Robbie Beal wanted to limit the discussion to the simple decision of whether or not to add an American flag alongside the battle flag to show that “we are not about wanting to return to the Confederacy, that we are not about promoting racism, that the only thing we wish to acknowledge is that a great battle occurred here and that it is part of our history.”

“Respectfully, the county seal is not to reflect who we are. It’s to reflect where we’ve come from,” Beal said.

He said he thinks adding the American flag would provide context around the Confederate flag. Hudson disagreed.

“I agree that we have a rich history in this county, and history needs to be preserved,” he said. “However, we are a county. We bring in businesses, and we’re not where we were 52 years ago.

Both Landrum’s and Beal’s amendments also failed. As the commissioners expressed a desire to speed things up, District 1 Commissioner Dwight Jones proposed getting rid of the county seal altogether and eliminating the need for a task force. District 4 Commissioner Chad Story amended Jones’ amendment to simply ask the task force whether or not the Confederate flag should be removed. Both commissioners ended up repealing their proposals so that Story could instead introduce a proposal to do away with the task force and simply remove the Confederate flag with the commission’s vote. This amendment also failed.

Anderson will form the task force, which will present its determination concerning the county seal to the commission at its meeting on Monday, Sept. 14.

Should the task force and the commission decide the seal should change, a request would go before the Tennessee Historical Commission, where it would need two-thirds approval before a final decision could be made by the county commission. 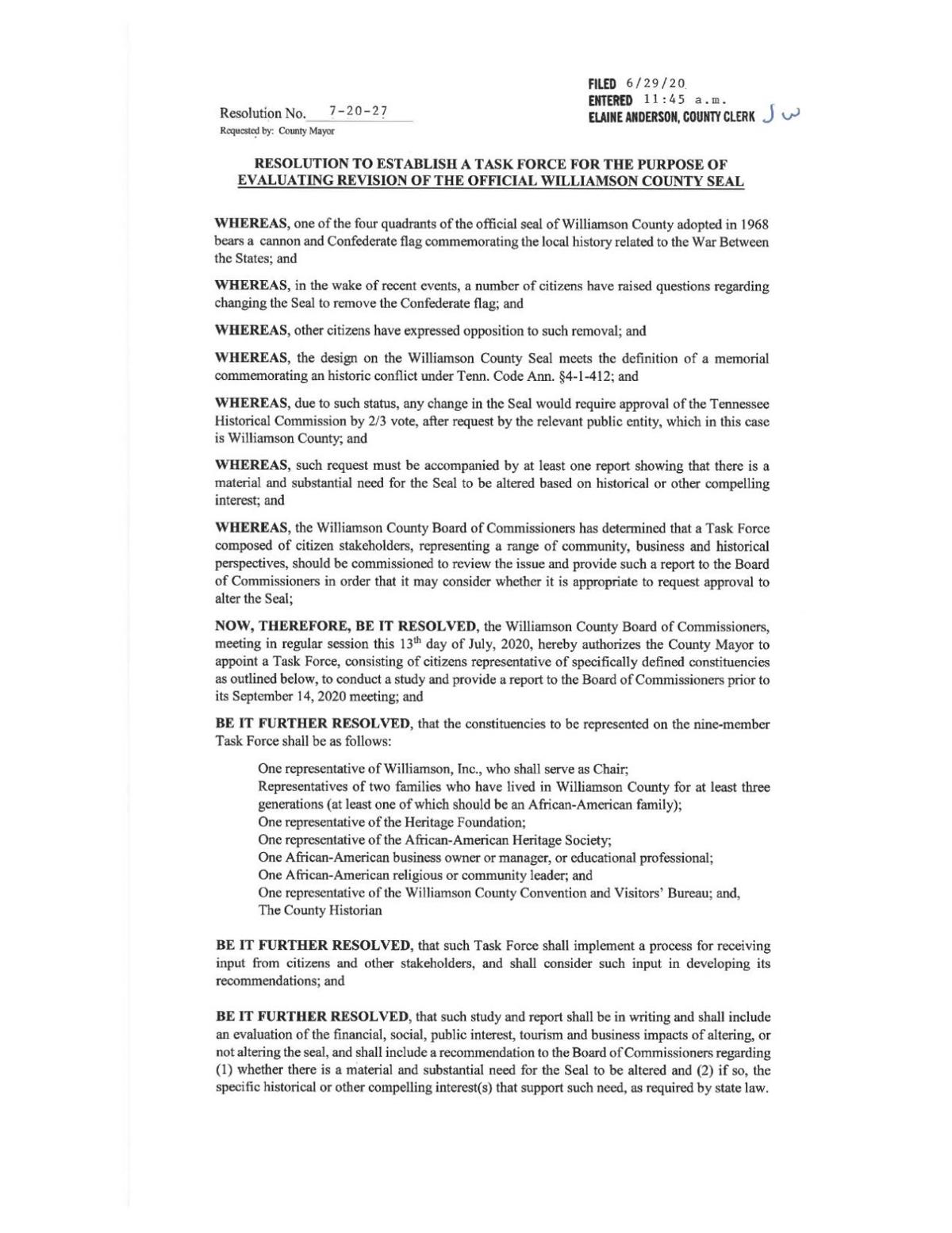