“I can’t be scared when I’m surrounded by such love,” said event organizer Betsy Vernon of rumored threats of violence.

Alderman Pearl Bransford waves at the protestors and cars honking in support on Thursday night.

Protestors lie on the ground in a handcuffed position. 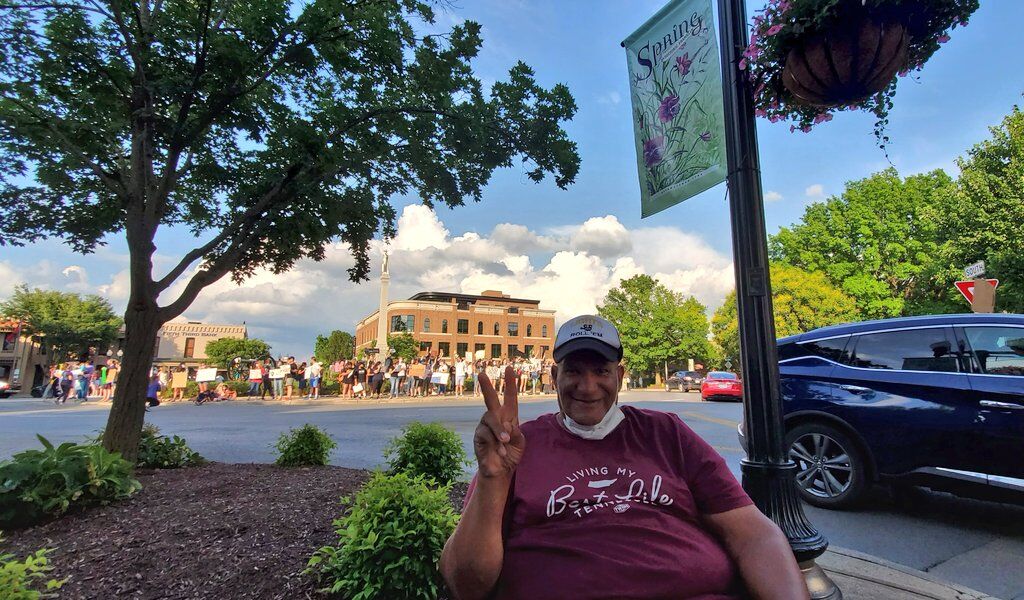 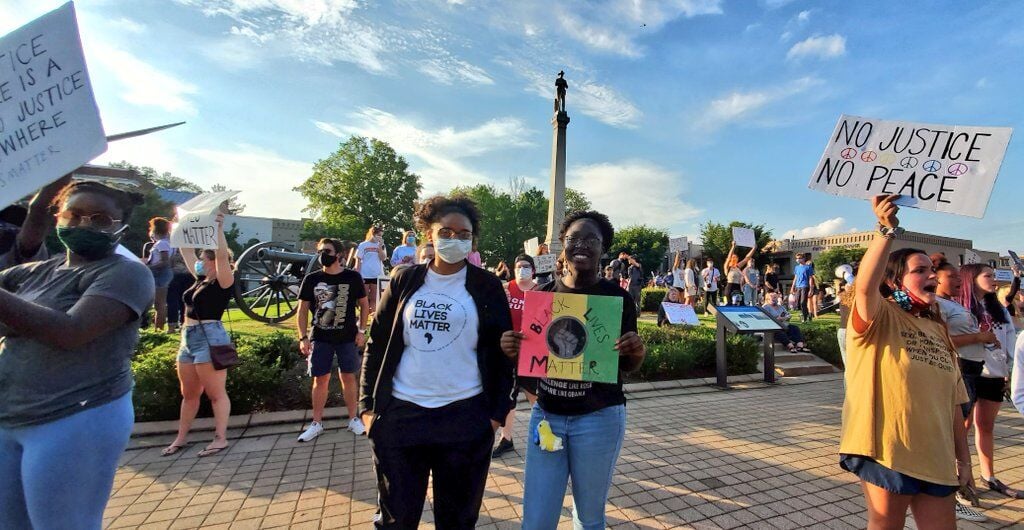 Teenagers stood together in protest, leading the call and response chants. 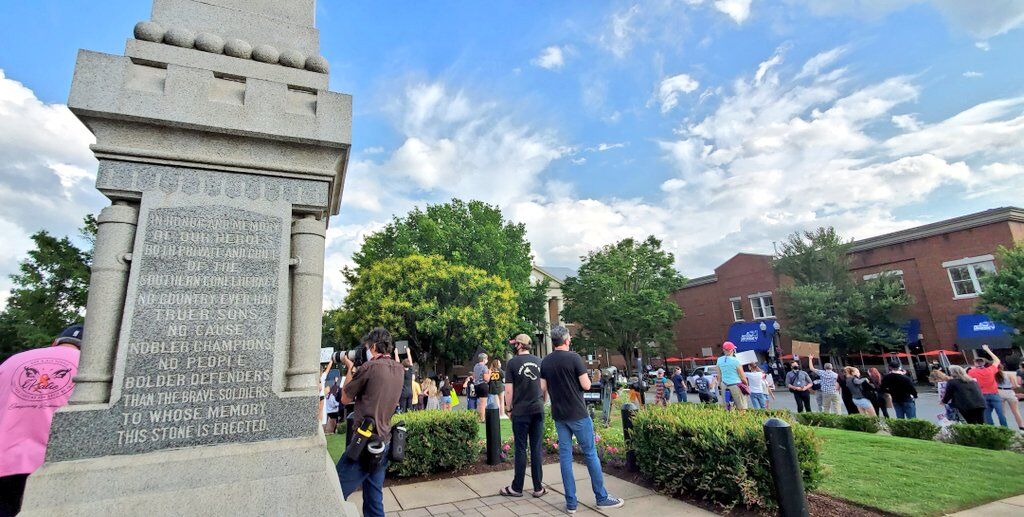 Protestors stood on the square next to a monument erected in 1899 to honor the Confederate soldiers who died fighting in the Civil War.

Protestors handmade signs, one asking for the removal of the Confederate monument on the square. 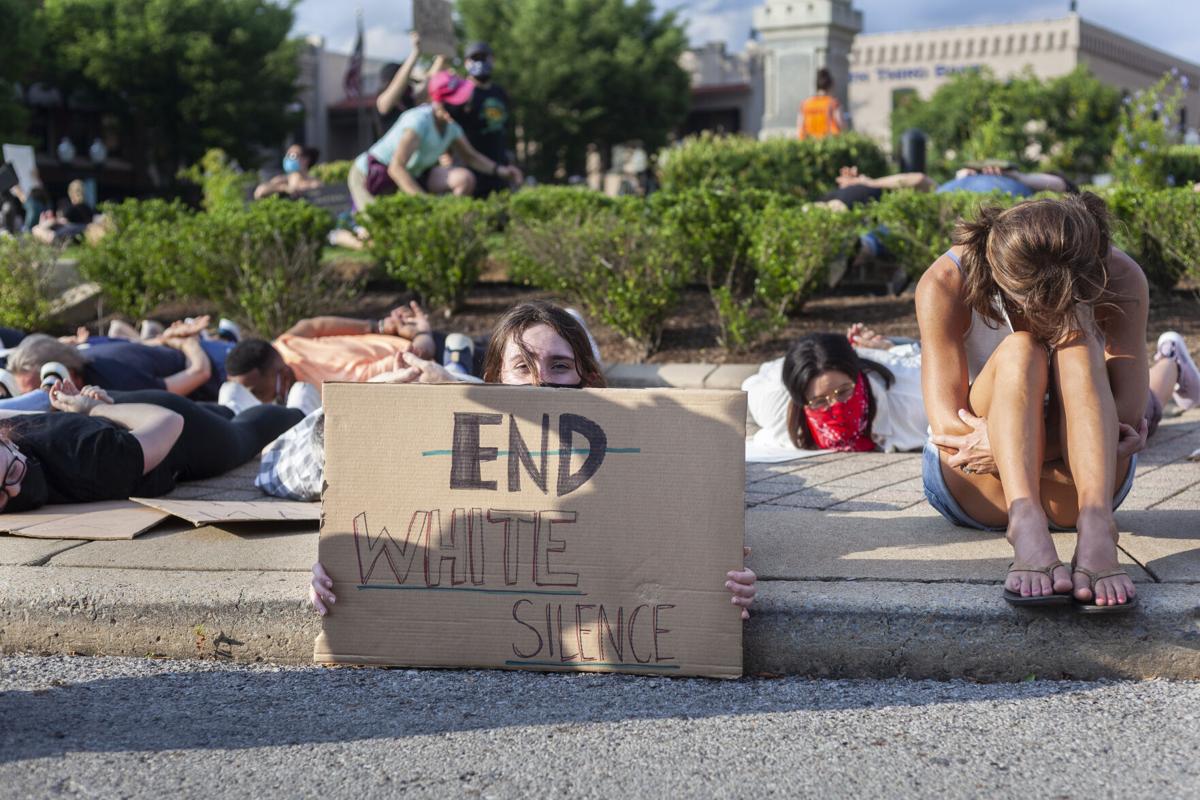 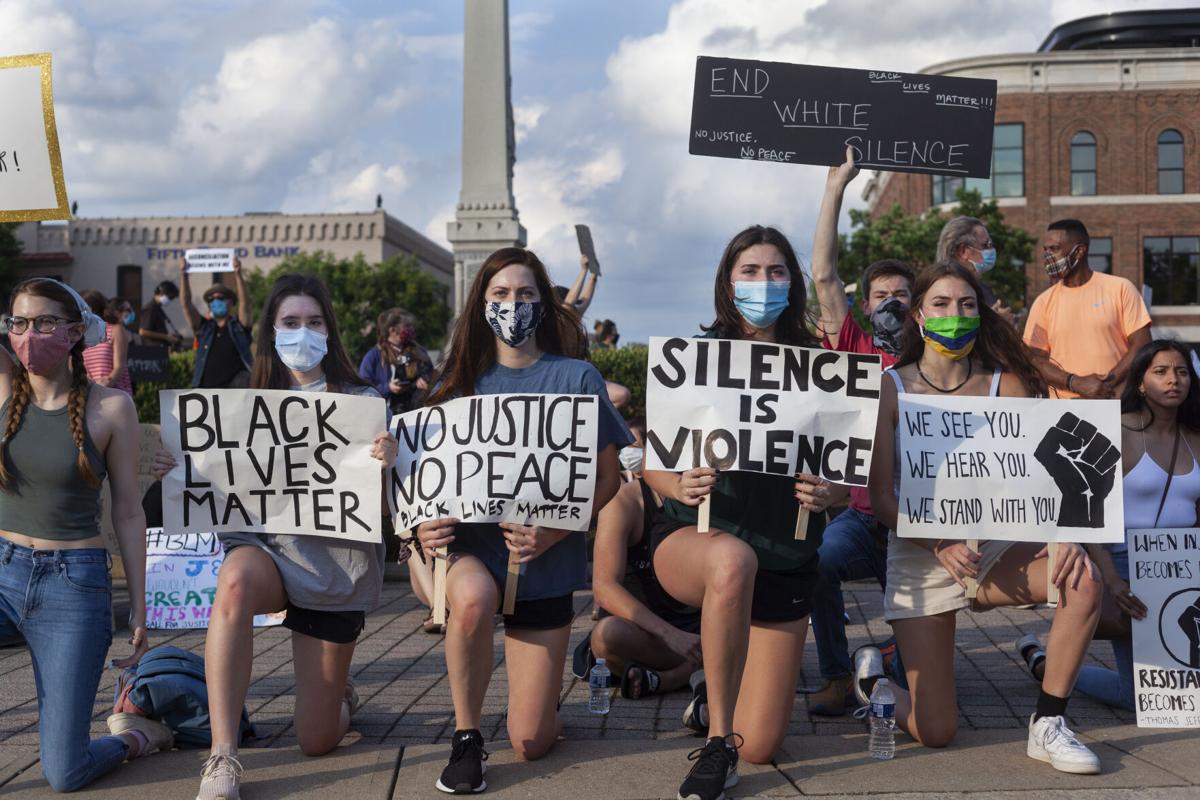 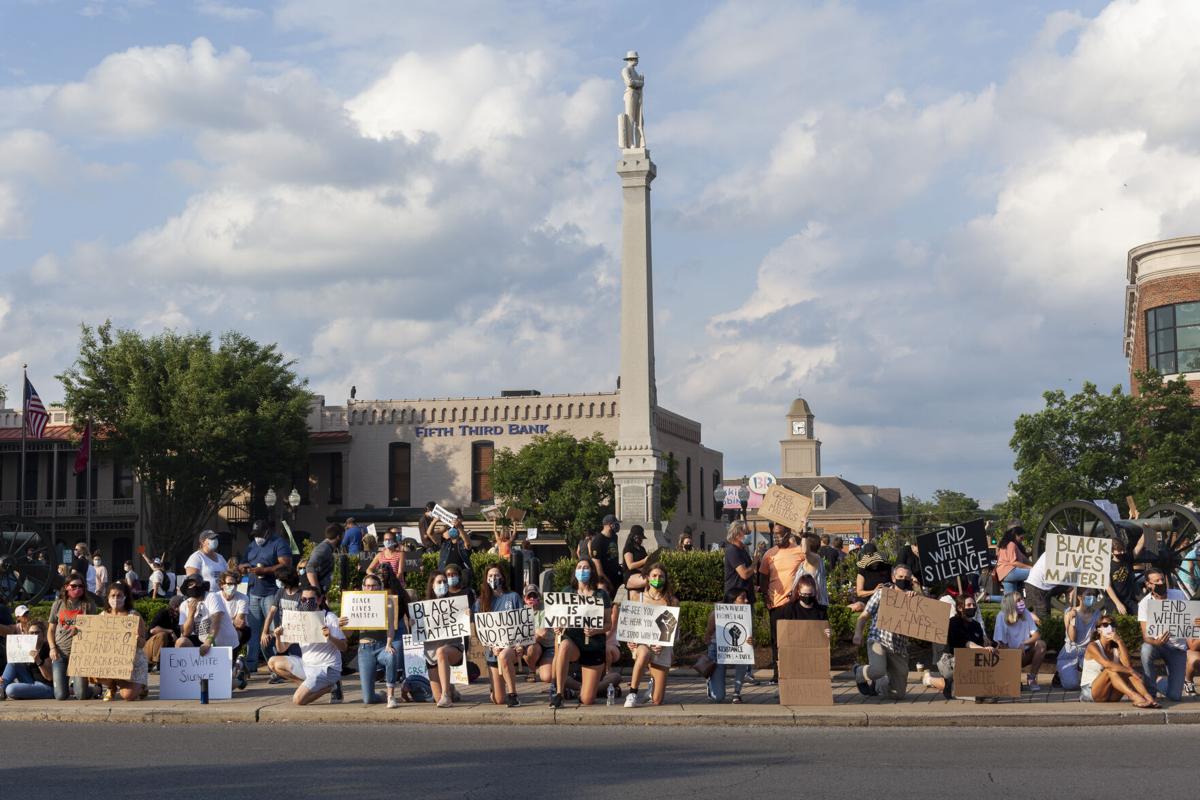 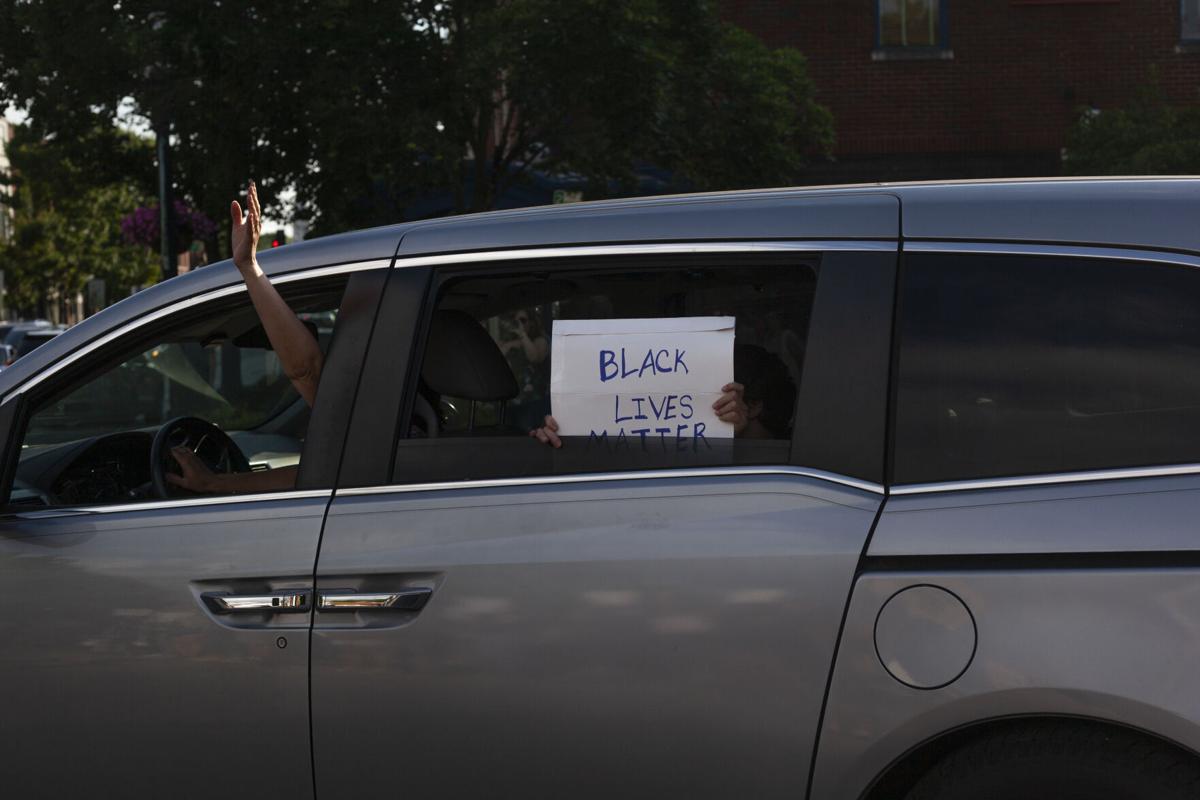 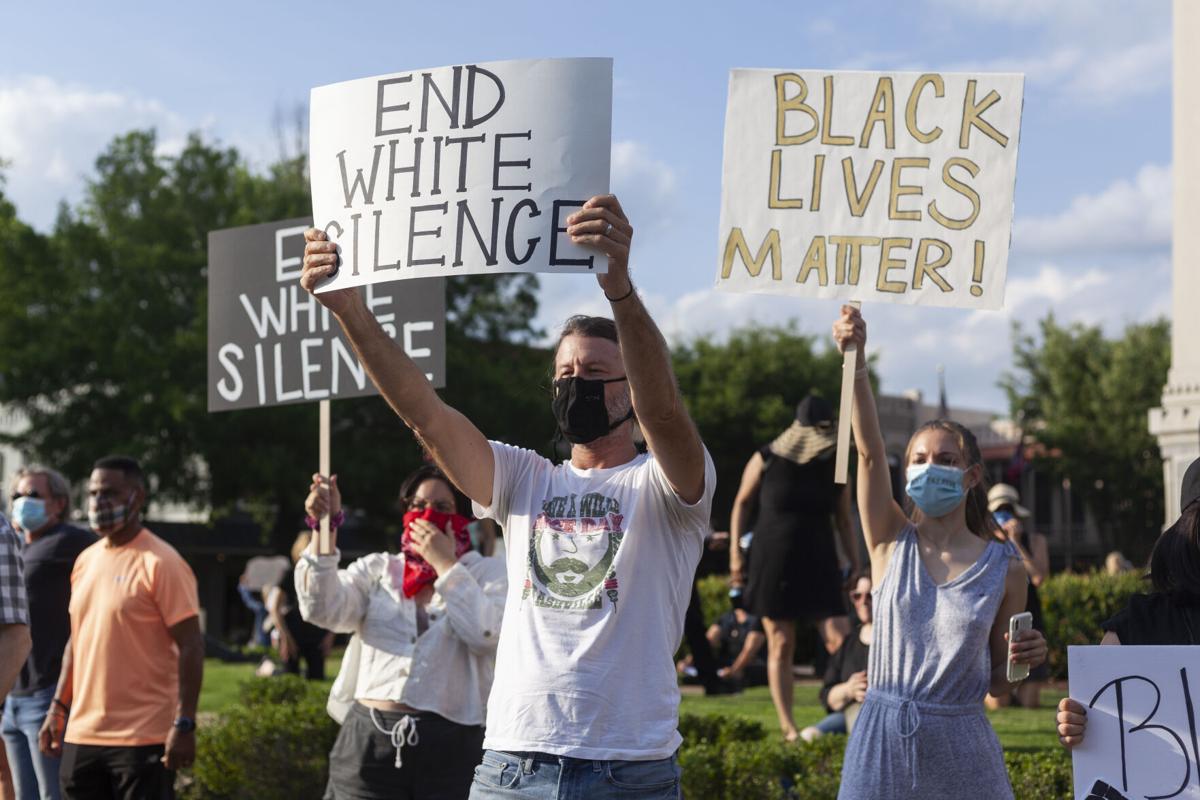 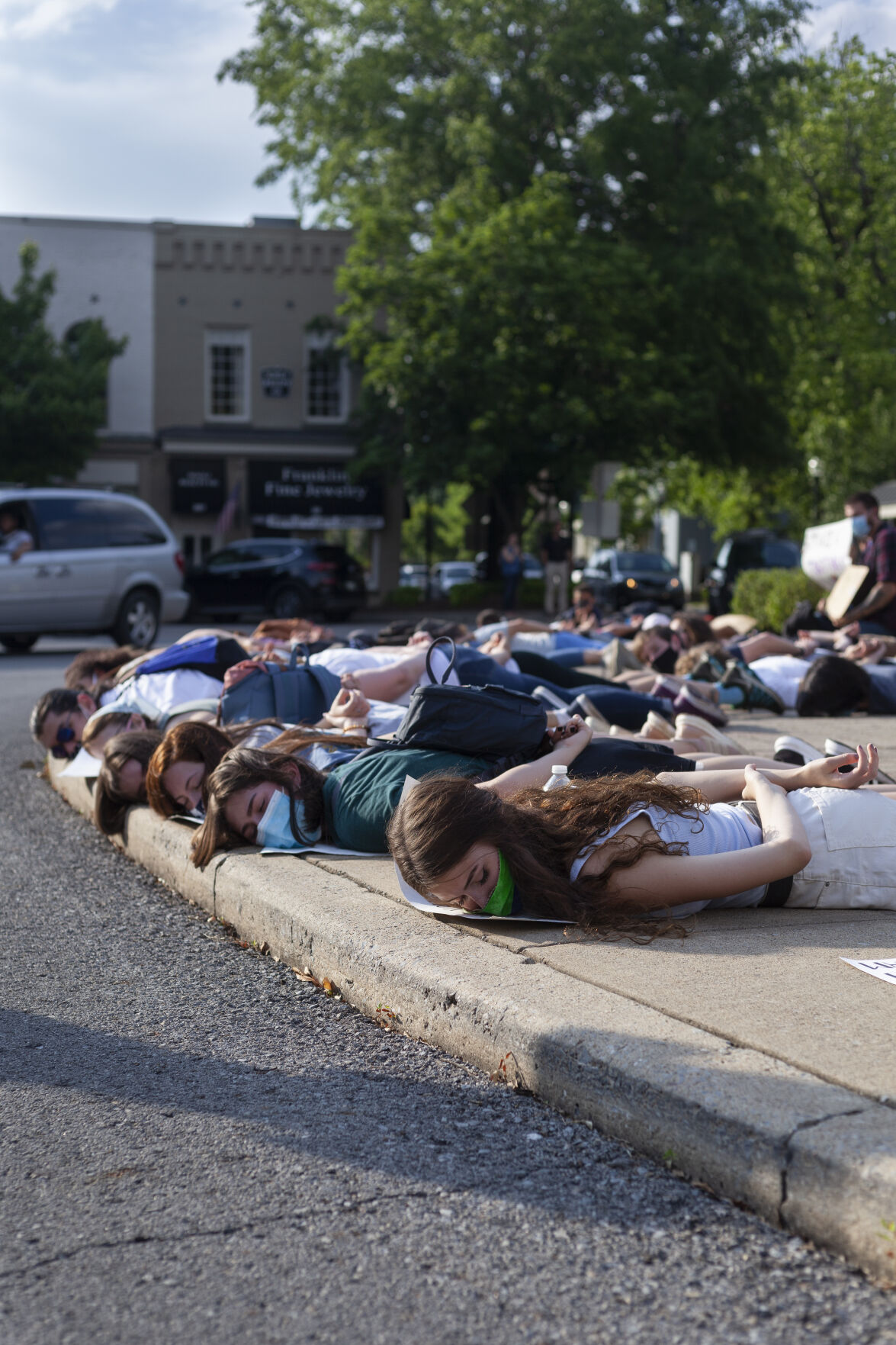 “I can’t be scared when I’m surrounded by such love,” said event organizer Betsy Vernon of rumored threats of violence.

Alderman Pearl Bransford waves at the protestors and cars honking in support on Thursday night.

Protestors lie on the ground in a handcuffed position.

Teenagers stood together in protest, leading the call and response chants.

Protestors stood on the square next to a monument erected in 1899 to honor the Confederate soldiers who died fighting in the Civil War.

Protestors handmade signs, one asking for the removal of the Confederate monument on the square.

As the nation continues to see protests against police brutality and racism against blacks, Franklin held the largest protest in recent memory on town square Thursday night to “End White Silence.”

Between 200 and 300 masked people, including families, teenagers, the middle-aged and elderly, showed up throughout the hot evening hours, bearing signs to support the cause.

Shouts rang out throughout the evening, led largely by a group of local teenagers.

“Say his name! George Floyd,” and “Hands up! Don’t shoot!” came through a megaphone as cars circling the square honked, largely in support.

One man yelled at the protestors, “Go home!”

“I live right down the street, homie,” yelled back Grant Marsh, the secretary of the Williamson County Democrats.

The protest comes during a week of events in Franklin aimed at educating the community on racism and standing in solidarity with neighbors across the racial divide.

Tuesday’s prayer vigil to honor George Floyd, Breonna Taylor and Ahmaud Arbery at First Missionary Baptist Church saw a turnout of more than 500, with many more tuning into the livestream.

Event organizer Betsy Vernon, a 10-year resident of Franklin, said that aside from participating in past protests, “I’d never done anything like this before.”

Vernon said the protest is in response to the call to action the group Showing Up for Racial Justice shared last week, which asked people to protest peacefully at a place of prominence in their community with signs urging others to “End White Silence.”

“I fully expected it to be just me out here with a sign,” she said. Instead, a large crowd showed up to protest together on town square.

“I was a little bit nervous as I started reading some things on Facebook, but I truly believe the vast majority of people are here because they want change, and are here for peace,” she said.

Alderman Pearl Bransford, a longtime member of the city’s Board of Mayor and Aldermen and a black activist in the community, said she didn’t know about the protest until driving by.

“I’m so glad to see people not being silent about it,” she said of the movement.

“Black lives matter, too,” she said, noting that statement doesn’t take away from people of other races. “It’s not instead of other lives.”

Several downtown business owners watched the protest off to the side quietly, concerned about outside violence from anti-fascist groups.

“If you’re going to protest, that’s the way to do it,” said Bill Baskin, who co-owns Boutique MMM with his wife, Maria, on the public square. “Peaceful, civil.”

Still, Baskin had his concerns about the rumors of violence heading to Franklin.

“It should scare everybody,” he said. “If anyone can watch the news just for one night, and not be scared by the prospect of having to face that violence, something’s not right.”

Brother Henry Hardeman, one of Franklin’s lifelong black residents, said he was encouraged by the show of support for the black community. Many know Hardeman from his time working at Franklin High School and the Franklin Theatre, or simply from seeing him around downtown.

He watched the protest from his motorized scooter, greeting many who know him outside the F&M Bank building with a warm smile.

“Violence is not going to solve the problem,” he said. “Justice will prevail. If it’s not motivated by love, we’re fighting a losing battle.”

The items that their research suggests would reduce police violence by 72% are as follows:

• Require officers to de-escalate situations before resorting to force

• Require officers to give verbal warning before using force

• Require officers to exhaust all alternatives to deadly force

• Require comprehensive reporting on use of force

The above is untrue. I was there. There were about 30 people in the circle with signs. There were hundreds of people standing around the outskirts shaking their heads and commenting on their disagreement. Very few honks were made in support. Lots of critical comments from car windows. The exact opposite of what you are reading above. The Williamson Herald is a tool of the liberal agenda. People stand up or lose your town.

BWATT, thank you for your readership. I can't attest to the number of supportive honks from cars or critical comments (I will notify Brooke, who reported this story, of your comment), but just the second picture attached to this article alone shows far more than 30 attendees. If you were there, I would ask, were you there for the entire event? We try our best to report factual information that tells the whole story, not just snippets, so it is important to us when reporting on events like this to stay the whole time and share the full picture.

I was there the majority of the time, and your assessment of the evening is quite different than mine. I counted people, I heard the honks, and the people standing around was far less than the ones in the circle on the square. We stand by our story.

Very concerned about this radical idea pushed by BLM to defund the police. I find no one that supports this. Neighborhoods to be policed by local community activists? The biggest victims would be the the most vulnerable in society like the poor and the elderly!