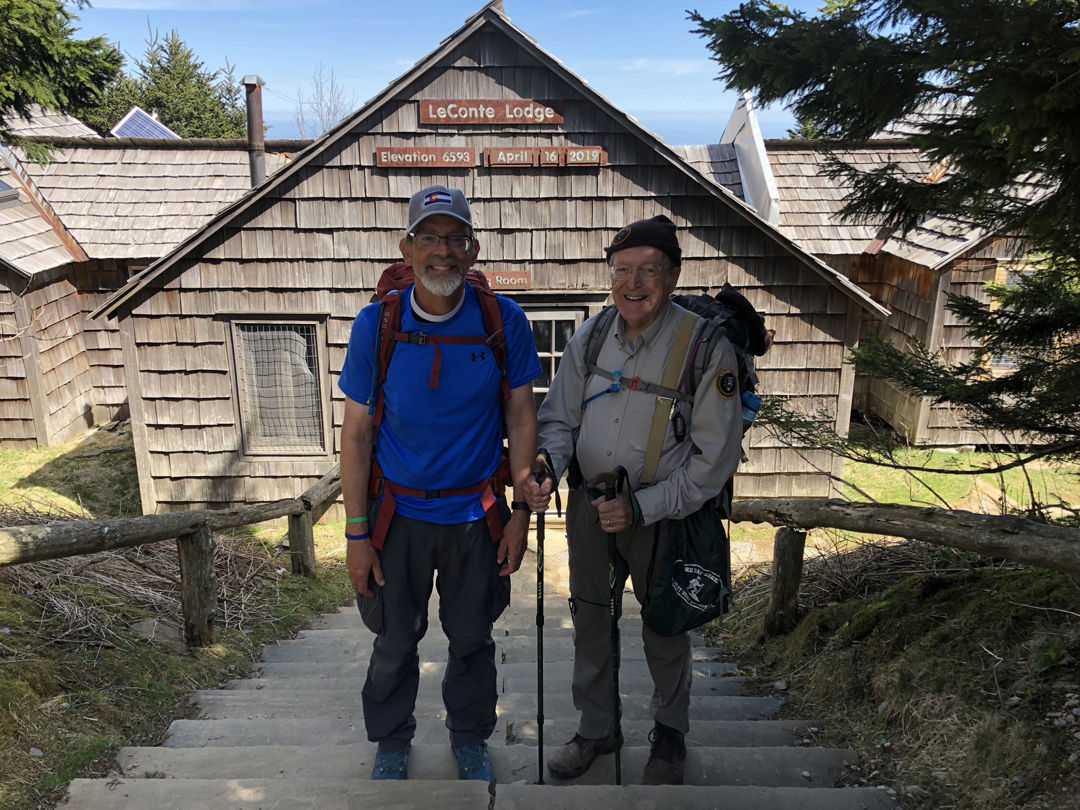 Rev. Peter Munsen is walking across the United States and raising money for four organizations that serve children. He started his walk on March 4 at Folly Beach, Virginia and hopes to reach San Fransisco by November. Along the trail from Athens to Calhoun, Tennessee on April 23. 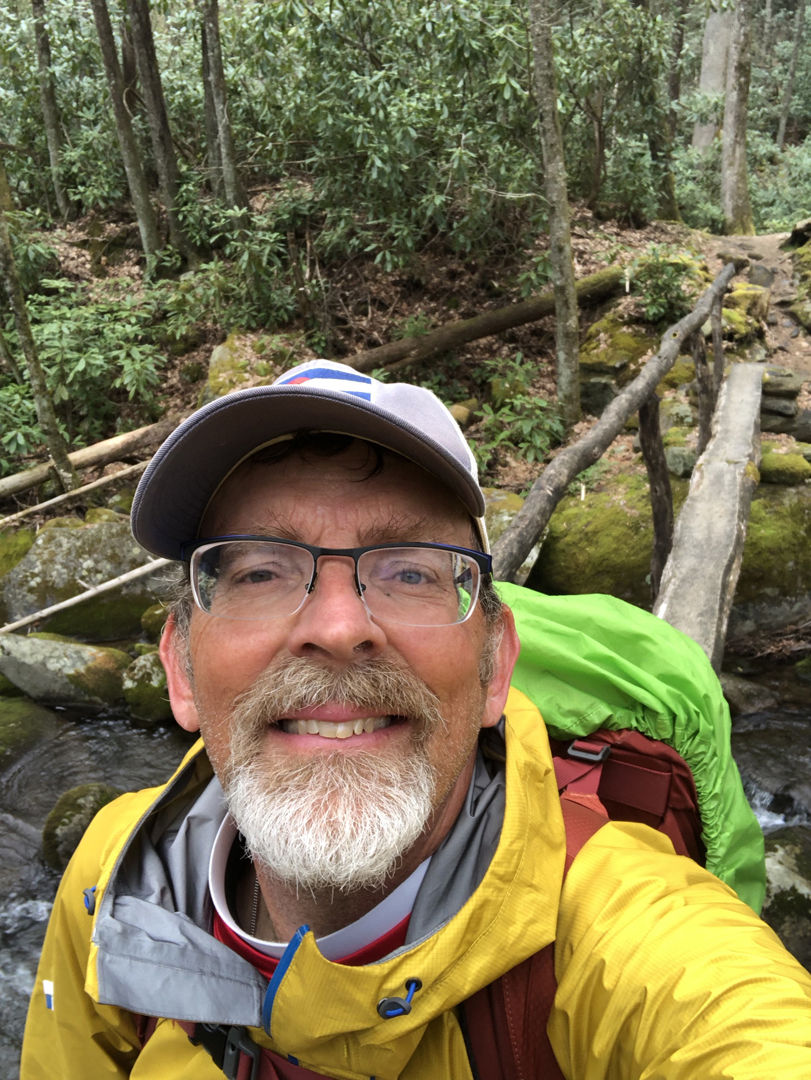 Rev. Peter Munsen walks April 15, near Sylva, North Carolina along the Appalachain Trail in the Great Smoky Mountain National Park - a day of delay when winds blew down trees and blocked the road. 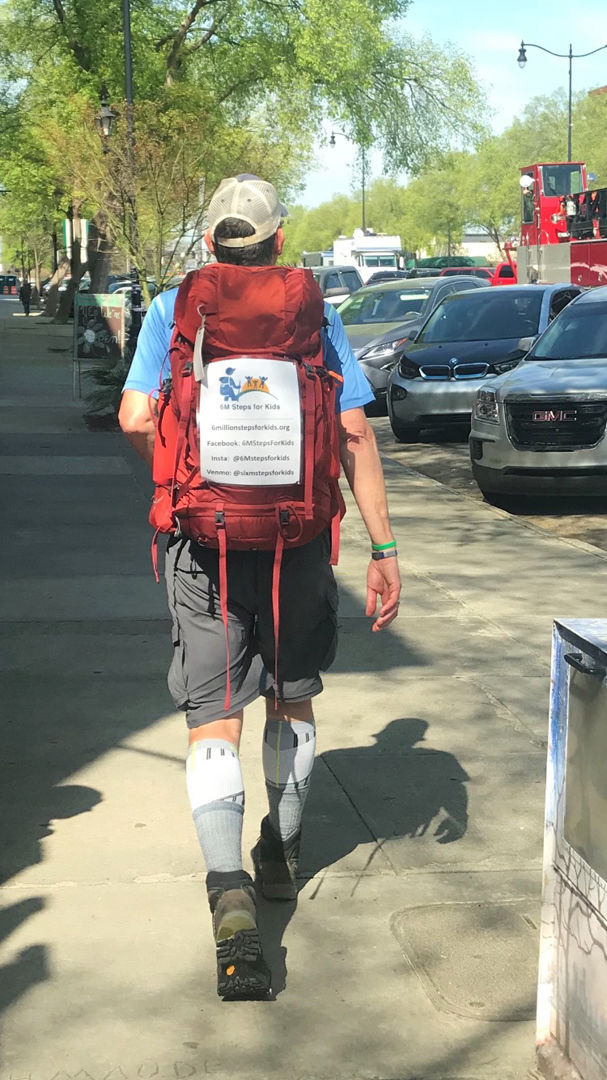 Rev. Peter Munsen is walking across the United States and raising money for four organizations that serve children. He started his walk on March 4 at Folly Beach, Virginia and hopes to reach San Fransisco by November. Along the trail from Athens to Calhoun, Tennessee on April 23.

Rev. Peter Munsen walks April 15, near Sylva, North Carolina along the Appalachain Trail in the Great Smoky Mountain National Park - a day of delay when winds blew down trees and blocked the road.

The Rev. Peter Munson on May 7 will pause his walk across the country for the evening to rest, refuel and refresh. And at 7 p.m., he will be at St. Paul’s Episcopal Church in Franklin to speak about his journey.

Afterward, the retired Episcopal priest from Colorado will spend the night with Franklin residents Iain and Peggy MacPherson before returning to his mission of walking from the East Coast to the West Coast.

Before his presentation, the public is invited to walk a mile with Munson as he treks from the MacPhersons’ home at 300/302 Lewisburg Ave. to St. Paul’s. Park-ing is available in the driveway or across the street at Zula and Mac’s Interiors. Walkers will step off at 6:15 p.m.

The inspiration to take the estimated nine-month walk hit Munson’s heart in December 2008 as he was completing a hike in Colorado’s Rocky Mountain Na-tional Park. He felt moved to “walk across the country, speak along the way and raise money for organizations and ministries that serve children.”

Such a walk takes planning and getting in shape. During the next 11 years, Munson prepared by working up his endurance, creating a 501(c)(3) nonprofit called Bright Future for Children and reorganized his life for a new journey. On March 4, just a month after the 61-year-old pastor retired from St. Ambrose Church in Boulder, Colorado, after 27 years as a priest, he embarked on his jour-ney, starting at the edge of the Atlantic Ocean, on Folly Beach, Virginia, and began another calling.

According to Munson in one of his daily blogs, many adults and children have no choice but to walk — to school, to work, to church and even for water.

“I walk because they walk,” he said, providing the reason for the journey, which will end in San Francisco. Munson estimates it will take “6 million steps for kids” to complete the journey. Along the way, traveling at about 3 mph, or less, his goal is to raise one dollar for each mile to benefit four organizations and ministries that serve children.

They are REMAR Children’s Home and School in La Libertad, El Salvador, a home that nurtures children and guides them toward a productive adulthood; Street Fraternity, a mentoring program for 14- to 25-year-old males of refugee families living in Denver, Colorado; Episcopal Relief and Development, a worldwide pro-gram to help communities address priorities leading to healthier, more productive and fulfilled lives; and the Episcopal Church in Colorado, which provides a variety of programs for children and youth.

Since Munson embarked on his trek across the United States, he has seen and experienced so much beauty and good and received so many blessings. He’s wit-nessed a bald eagle catch a wind current, numerous generous acts of kindness, which include lodging, food, meals, rides back to the day’s starting points, shared stories and donations to 6 Million Steps for Kids.

“Grace upon grace ... God’s grace abounds,” he wrote. “I set off on a walk across the United States on March 4 without having many things figured out be-forehand, like where I would be sleeping on many of the nights, where I would be speaking, and what would be my best strategies for raising $6 million or even $600,000 for these four charities that all do wonderful work with and on behalf of children.”

After almost nine weeks on the road, Munson has accumulated real stories of God providing what he needed along the way.

Read more about Munson’s journey of 6 Million Steps for Kids at www.6millionstepsforkids.org or stop by St. Paul’s Episcopal Church at 7 p.m. May 7. Admission is free, but donations for the walk will be accepted.