After issuing a “safer-at-home” order on Monday, urging but not requiring Tennessee residents to shelter in place, Gov. Bill Lee tightened his restrictions, signing a “stay-at-home” executive order on Thursday.

“April stands to be a very tough month for our state,” Lee said. “COVID-19 is an imminent threat, and we need you to understand that staying home isn’t an option; it’s a requirement for the swift defeat of COVID-19 in Tennessee.”

Upon the signing of Executive Orders 22 and 23, the governor now includes an order directly to citizens, requiring them to stay home except for limited essential activity or services through April 14. While in prior days Lee verbally encouraged residents to stay at home, previous executive orders placed restrictions around businesses, gatherings and services, not Tennessee residents themselves.

Lee explained this shift to a mandate came as a result of data suggesting increased travel following his “safer-at-home” order alongside a rise in confirmed cases to 2,845 as of 2 p.m. Thursday, 199 of which are confirmed to be in Williamson County.

“Over the last two or three days, we’ve seen some troubling data points that tell us that some in our state may not be staying in place as much as we would hope,” he said. “Data from the Tennessee Department of Transportation analyzed traffic patterns for March 2020. While safer-at-home measures and further restrictions on businesses showed a steep drop-off in vehicle movement from March 13 through the 29th, data beginning on March 30 indicates that travel is trending upwards again.”

He shared that law enforcement officers have the authority to enforce this new order as they see fit. The Franklin Police Department announced Friday that officers will issue warnings to noncompliant businesses and individuals, and those who continue to operate outside the governor's provisions following a warning will be cited. Other Williamson County police departments have not announced plans of action as of noon on Friday.

Lee added that, at this time, he does not plan to change the list of essential businesses featured in his “safer-at-home” order.

Additionally, the state is transforming the Music City Center in Nashville into a non-acute alternative health care facility for COVID-19-positive patients in Middle Tennessee, expected to have the capacity to house 1,600 patients. Lee said Memphis, Knoxville and Chattanooga will also have facilities to service other parts of the state.

These facilities will be used for patients who require medical attention but not critical care.

“Some major alterations are necessary to accomplish this. … It’s not just about finding capacity for this; it’s about building out support services, furniture, supplies, staff to ensure that these extra capabilities will deliver the utmost quality care in the midst of a potential surge,” Lee said. “We’re calling on all displaced or furloughed health care personnel in our state and beyond to register on the Tennessee Department of Health website to work together with us to address the challenges that we have ahead.”

Tennessee Department of Health Commissioner Lisa Piercey said two labs in the state have successfully performed a 45-minute test for the coronavirus, and she expects this capacity to grow. She also noted that, though the number of confirmed cases increased by less than 200 from Wednesday, this does not represent a trend.

“What that likely represents is a lot of private labs have a four- to five-day testing lag, and four to five days ago was the weekend,” she said. “We know people present for care less often on the weekends, and so I want to encourage you not to interpret that these numbers are going down or they’re slowing down. This is just what we consider normal statistical variation, and it is not yet a trend.”

According to various projection models, the state expects case numbers to peak in the latter half of April, though the governor said this could change due to social distancing efforts.

“April will be a very serious month, so do your part and stay apart,” Piercey said.

For more information from the Tennessee Department of Health, visit tn.gov/health/cedep/ncov.html. Additionally, Executive Orders 17, 21, 22 and 23, which show a progression from Monday to Thursday, can be read below. Find a full list of executive orders at sos.tn.gov. 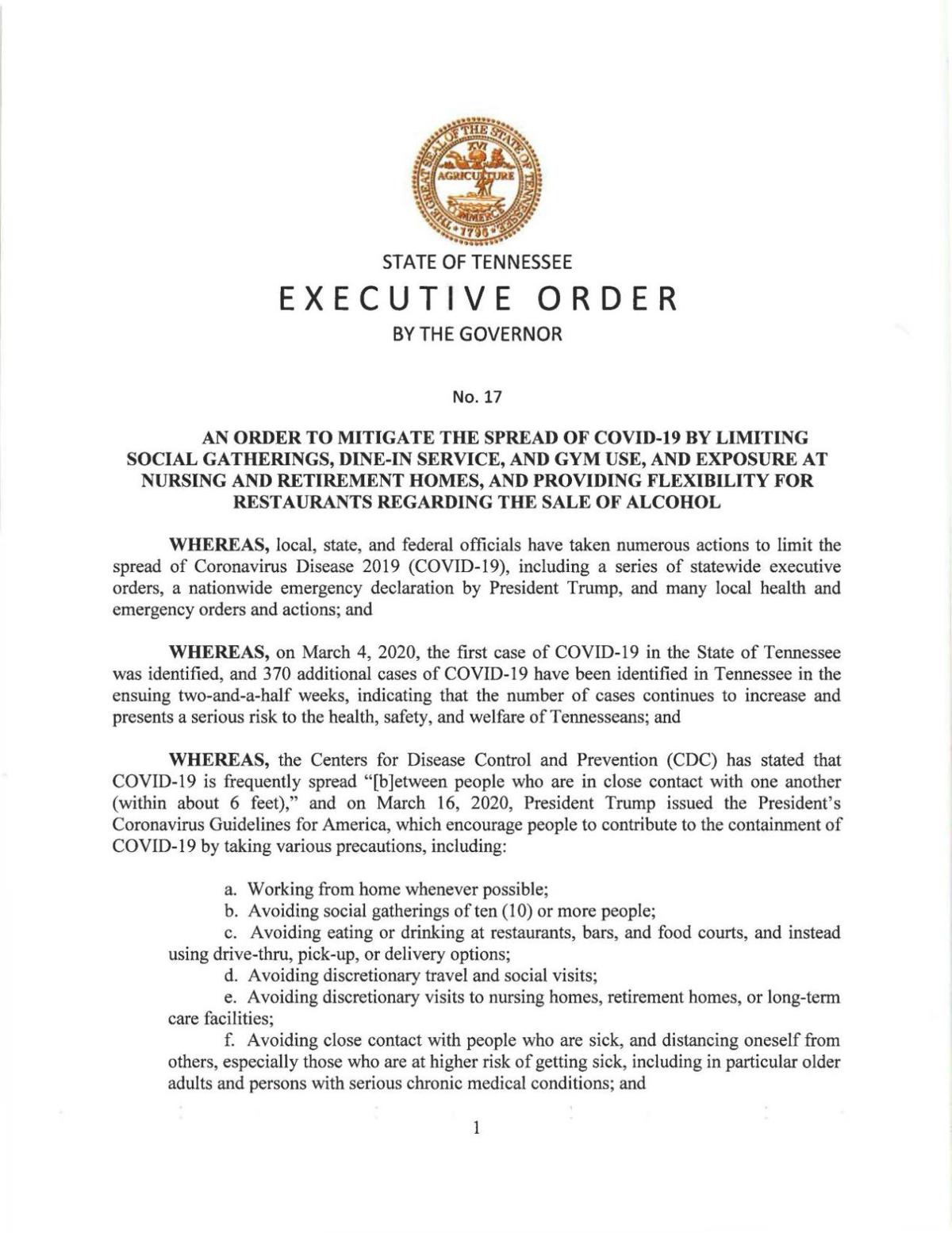 Gov. Bill Lee issued a safer-at-home executive order Monday, which advises but does not mandate Tennessee residents to stay at home.