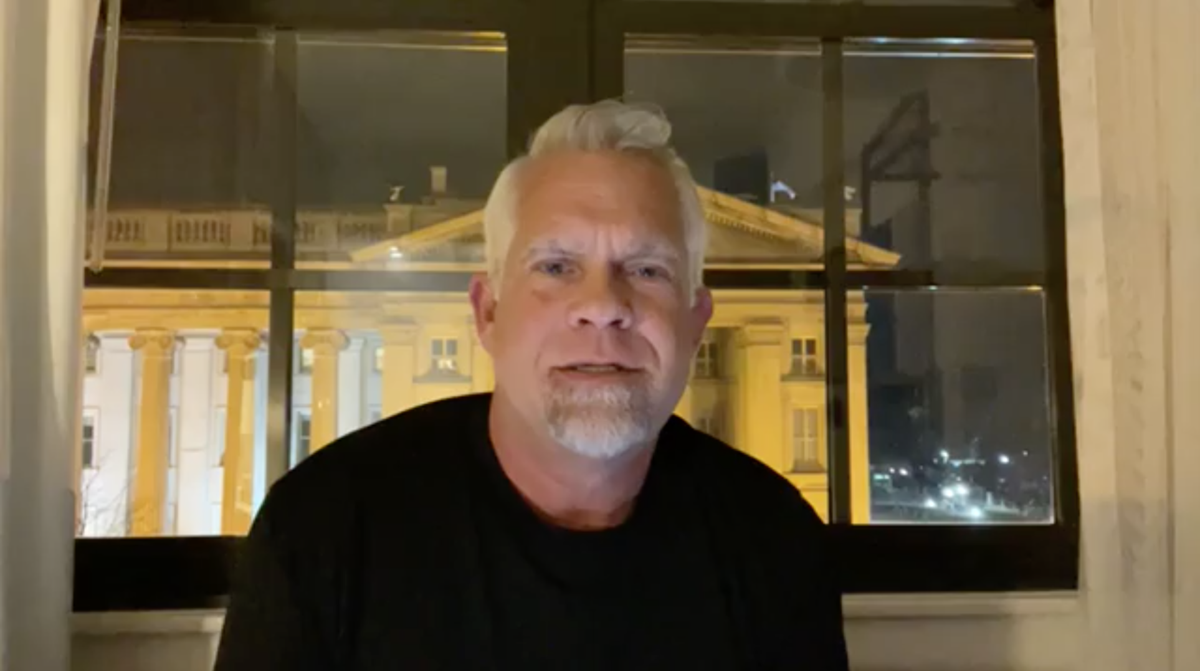 Steve Berger, the pastor of Grace Chapel in Franklin, went live from Washington, D.C. on social media Wednesday following the raid at the Capitol. 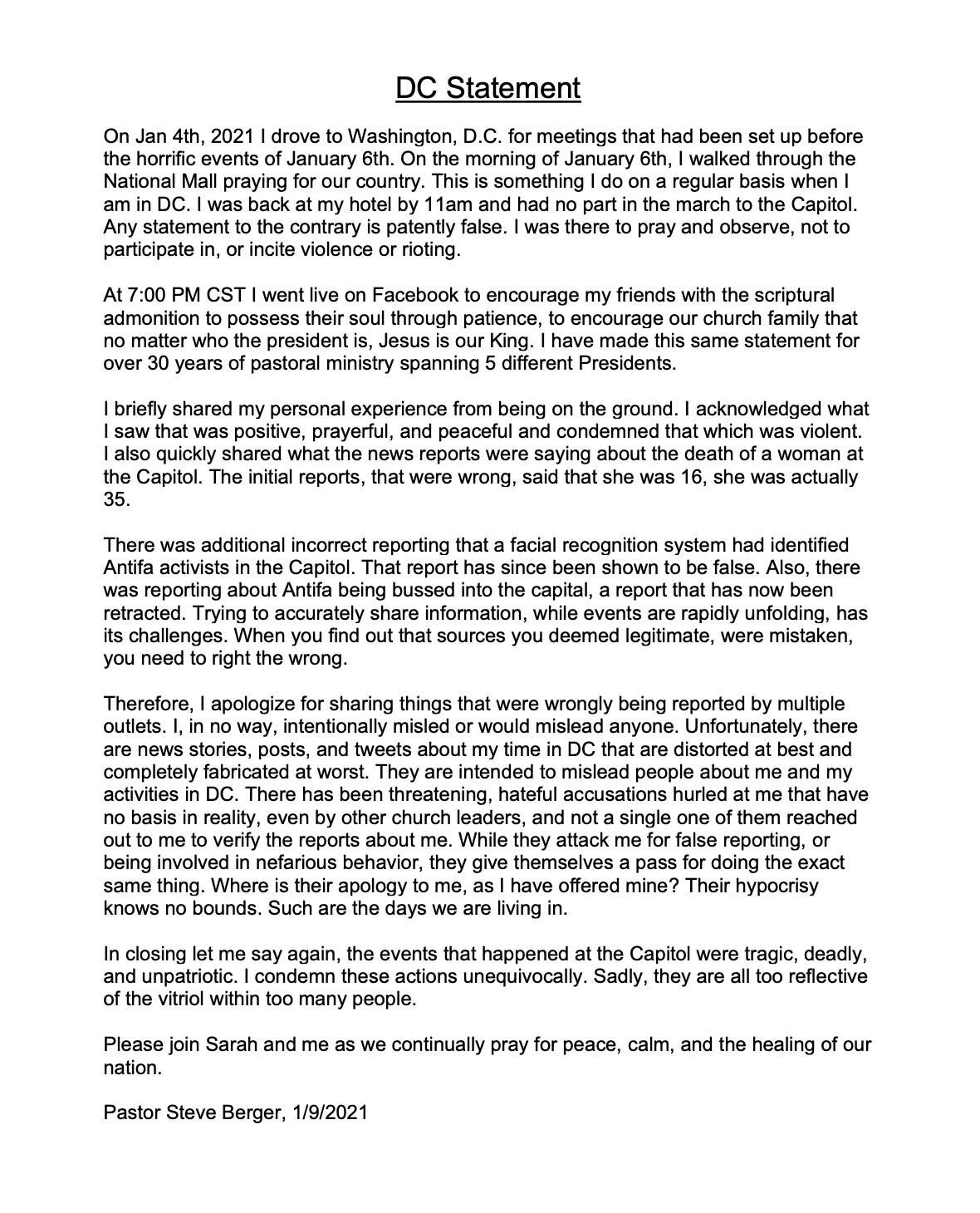 After claiming live on Facebook Wednesday evening that anti-fascist activists had been identified "for a fact" at the Capitol, a Franklin pastor released a statement Saturday saying his comments were based on false information.

Steve Berger, pastor of Grace Chapel in Franklin, appeared live on his Facebook page Wednesday evening from Washington, D.C., after attending the rally for President Donald Trump, which resulted in dozens from the crowd storming the Capitol.

Berger shared, like some other attendees from Williamson County, that the majority of the thousands of people at the rally were peacefully protesting outside the Capitol before some "bad apples" from the crowd breached the Capitol Police line and broke into the building.

Among those "bad apples," he said, were identified anti-fascist, or antifa, activists, referring generally to "videos going around" the internet and pictures of some in the Capitol at other events.

"I'm not here to say that the troublemakers were all and only antifa members, but I can tell you this: they were there, they were present and they were identified," he said.

Berger received both praise and criticism from the community for his statements, garnering particular attention because Grace Chapel is where Tennessee Gov. Bill Lee regularly attends.

Berger released a statement Saturday in which he shared he incorrectly referred to Ashli Babbitt, who was shot and killed during the riot, as a 16-year-old based on false information that he read. Babbitt was 35.

"There was additional incorrect reporting that a facial recognition system had identified Antifa activists in the Capitol. That report has since been shown to be false," Berger's statement reads. "Also, there was reporting about Antifa being bussed into the [Capitol], a report that has now been retracted."

As rally attendees who entered the Capitol Wednesday have been identified and arrested by law enforcement over the last few days, several mainstream news organizations have addressed rumors, videos and photos circulating social media to correct several unproven claims about antifa involvement during the Capitol raid.

The Federal Bureau of Investigation told Reuters there is "no indication at this time" of antifa involvement in the group that stormed the Capitol.

"When you find out that sources you deemed legitimate were mistaken, you need to right the wrong," Berger's statement further reads.

You are a scumbag and liar. Some preacher you are. Wonder how jesus would view your behaviour.

Pastor Berger is an honorable man. His first observation is correct, but we all know the deep state and national media sympathizers will provide necessary cover and diversion, actually making the truth unpalatable by pressuring brave men to recant the truth. The deep state is VERY good at covering for their activist, especially when they plan to use their minions for an insurrection to score political gain for their elected leaders.

The pastor should tend to his church and religion and stay out of politics.

Steve has been going to Washington to pray for our leaders for a long time and if you read his statement this meeting was planned weeks in advance. Conflating something pastors have been doing since the founding of this country with getting involved in politics is not different than what the media is doing to spin the truth.

I find Pastor Steve's recant honorable. I don't see ANYONE else coming back to apologize when statements are made with the info available at the time. Heck, this rag sure doesn't. We all know (regardless of what side you are on) that there certainly were ANTIFA in that crowd and some patriots fell for it and went along. It was WRONG. Bottom line. But don't criticize a man just because you personally have a problem with God.

Articles like this and the controversy surrounding it can be unfortunate. I watched the live on Facebook at the time and the controversy doesn’t come close to the point he was making. I encourage anyone to watch it as it is easy to find. I, along with millions were out of sorts and concerned over what went on. The pastor tried to give perspective from what he saw as a way to segue into what his actual message was. Additionally, if you have listened to him for any length of time, you would know that he frequently meets with leaders in Washington. Recently, he made a trip abroad which he shared with the congregation and reviewed with government officials afterward in another visit. It was FAR more newsworthy than calling him out for what lots of people believed was happening last Wednesday. I wish this, or the focus of his recent trip was the subject of the article. While I don’t know the exact reason for his visit last week, I know from an announcement he made prior that it was not to attend the rally. The rally was so large with estimates approaching a million people that you couldn’t help but walk through to get anywhere. I hope people temper their prejudgments and realize there’s lots of information they don’t have, especially when the press focuses on something that really didn’t relate at all to his message. Finally, I don’t blame him for not trusting the press. In the three or four times I have been involved with a story, I have always seen inaccuracies. I have very low esteem for the press and their ability to see or convey the real issue. One thing is certain in my view...most of the time if people become enflamed, someone is getting it wrong. In this case it was the original Tennessean writer and the WSMV reporter. I think the Herald would have been better off either leaving it alone or seeing if there was a way to get a bigger perspective.