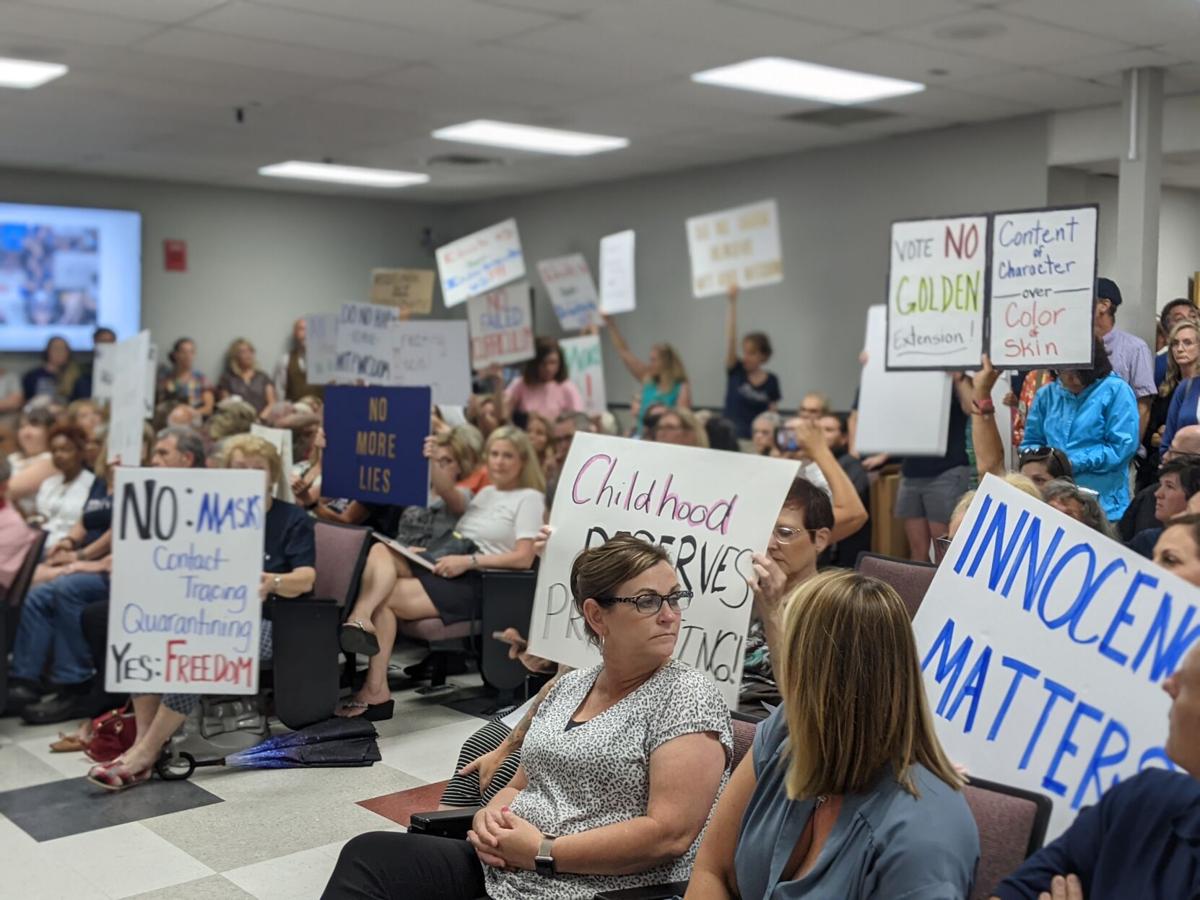 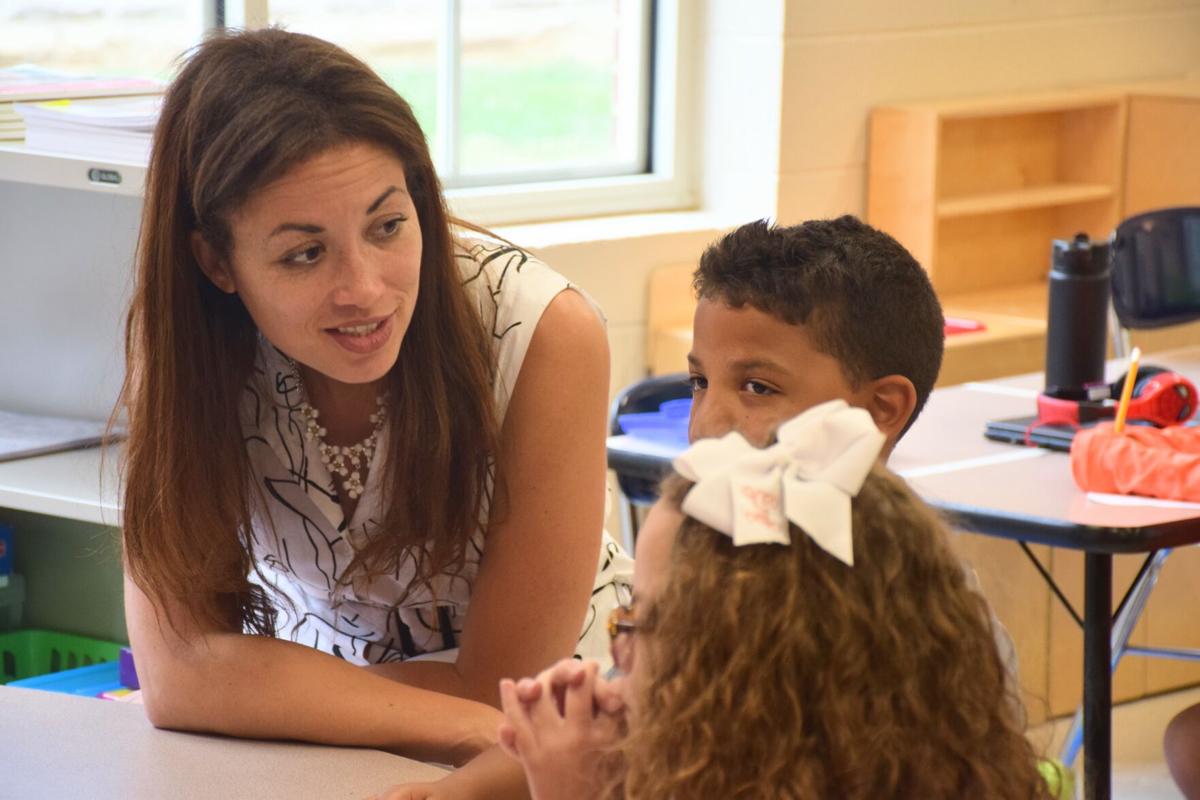 Tennessee Commissioner of Education Penny Schwinn sits in on a summer learning camp at Allendale Elementary School in Spring Hill. 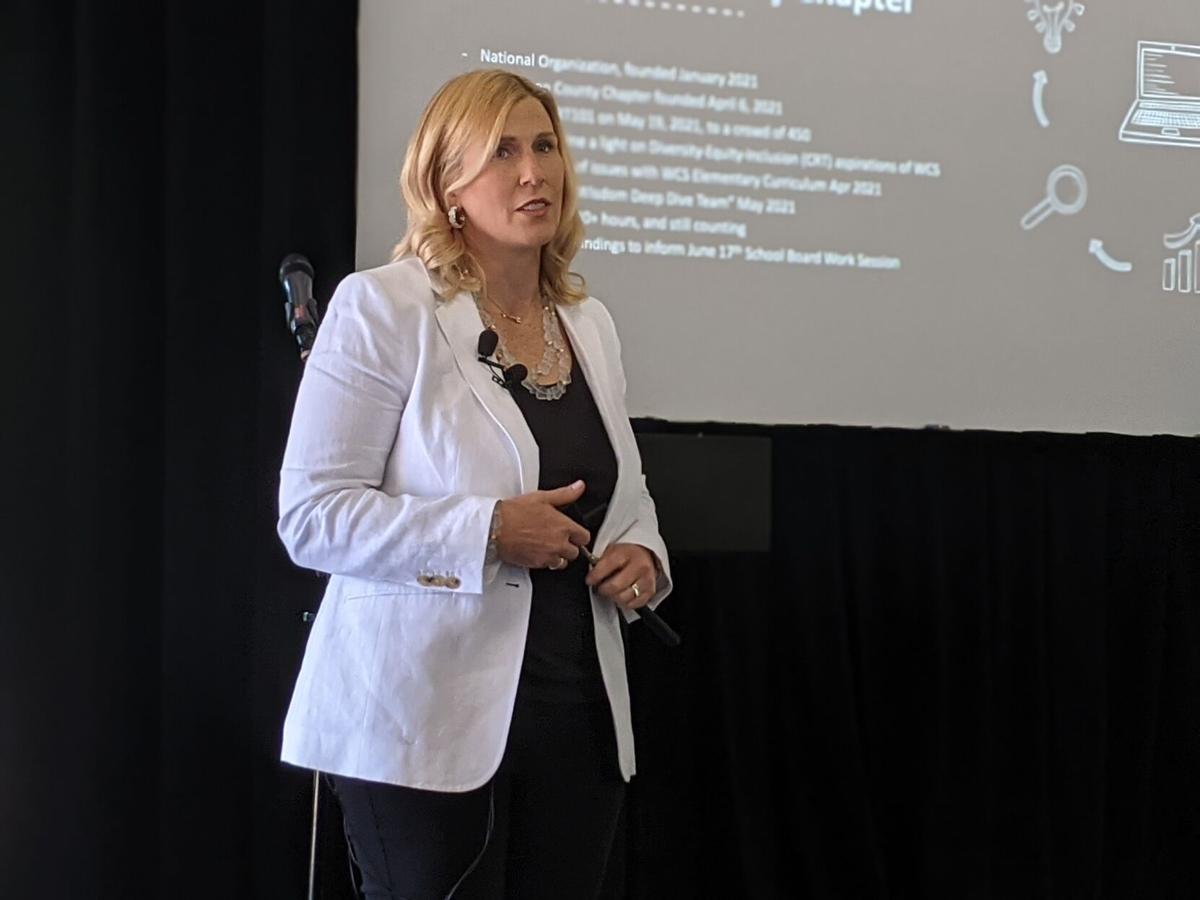 A Williamson County parent group has submitted a letter of grievance to Tennessee Commissioner of Education Penny Schwinn stating its concern that part of the English curriculum used by Williamson County Schools is in violation of a new law, known to many as the “anti-critical-race-theory law.”

“Targeting elementary age children with daily lessons on fighting past injustices as if they were occurring in present day violates Tennessee law and will sow the seeds of racial strife, neo-racism, neo-segregation, and is an affront to the ideals of Dr. Martin Luther King, Jr.,” the letter reads.

This letter was written by Robin Steenman, the president of the Williamson County chapter of Moms for Liberty. Over the past several weeks, this group has been vocal in its opposition of Great Minds’ Wit & Wisdom English language arts curriculum, which WCS implemented for grades K-5 in the 2020-21 school year.

While the group has expressed concerns about the age-appropriateness of texts throughout the entire K-5 curriculum, the letter to Schwinn targeted specifically the nine-week second grade module titled “Civil Rights Heroes,” which contains five texts: “Separate is Never Equal” by Duncan Tonatiuh, “Martin Luther King, Jr. and the March on Washington” by Frances E. Ruffin, “Ruby Bridges Goes to School: My True Story” by Ruby Bridges, “The Story of Ruby Bridges” by Robert Coles and the “I Have a Dream” speech by Martin Luther King Jr.

Steenman, whose children go to a private school, said Moms for Liberty holds that the module is “in clear violation” of a new chapter of TCA 49-6-10 passed last year, which prohibits school districts from using instructional materials that “include or promote” the following concepts:

• An individual, by virtue of the individual’s race or sex, is inherently privileged, racist, sexist or oppressive, whether consciously or subconsciously

• An individual, by virtue of the individual’s race or sex, bears responsibility for actions committed in the past by other members of the same race or sex

• An individual should feel discomfort, guilt, anguish or another form of psychological distress solely because of the individual’s race or sex

• A meritocracy is inherently racist or sexist, or designed by a particular race or sex to oppress members of another race or sex

• Promoting or advocating the violent overthrow of the United States government

• Promoting division between, or resentment of, a race, sex, religion, creed, nonviolent political affiliation, social class or class of people

• Ascribing character traits, values, moral or ethical codes, privileges or beliefs to a race or sex, or to an individual because of the individual’s race or sex

In Steenman’s letter, she expressed the belief that the Wit & Wisdom module “implies to second grade children that people of color continue to be oppressed by an oppressive … white population” and “reveals a heavily biased agenda, one that makes children hate their country, each other, and/or themselves.” She cited a letter written by WCS parent Chara Dixon, who wrote that her biracial son is “ashamed of his white half,” and another by WCS parent Nebiat Hagos, who wrote that “this curriculum is destroying our children.”

WCS staff and board members have discussed the curriculum at length during public meetings over the past two months in response to some parent concerns. Assistant Superintendent of Teaching, Learning and Assessment Dave Allen said while he has received parent concerns about the curriculum, he has also received a “flood of emails” from families who do not want the district to scrap the curriculum.

“Our teachers are reporting to us that kids are reading like they’ve never read before,” Allen said.

Another primary concern that arose from that survey was the repetitiveness of the “Civil Rights Heroes” module, so the district plans to broaden the scope of the module to include women’s suffrage.

Steenman, though, is hoping for a bigger change.

“If I could have my wish, then Wit & Wisdom gets pulled,” she said.

When she delivered the letter to Schwinn, Steenman said she was able to share part of the Wit & Wisdom presentation she created for a prior Moms for Liberty event.

“I was just going to hand her the letter, … and be on my way,” she said. “It was a surprise to me that we got nearly 90 minutes with her.”

Steenman shared that Schwinn didn’t give much of a response to the presentation that day. However, the commissioner sent a letter to state Senate Majority Leader Jack Johnson (R-Franklin), who has recently expressed his own concerns about the curriculum.

“I’ve heard from hundreds of Williamson [County] parents expressing their concerns about the Wit & Wisdom curriculum,” he wrote on social media late last month. “Materials used in our schools must be age-appropriate & historically accurate. Grateful for parents & school officials engaging on this issue.”

I’ve heard from hundreds of Williamson Co parents expressing their concerns about the Wit & Wisdom curriculum. Materials used in our schools must be age-appropriate & historically accurate. Grateful for parents & school officials engaging on this issue. https://t.co/vGFJjNOyjW

Schwinn’s letter to Johnson gave an overview of the state’s role in textbook adoption. She noted while the state reviews textbooks and curriculum strictly to evaluate how they align with state education standards, local school districts ultimately decide on which textbooks to use from the state-approved list.

“While the department evaluates materials for academic standards, we believe parents provide important oversight into how sensitive or controversial subjects are approached,” Schwinn wrote.

A representative from the commissioner’s office further clarified that the state’s review of textbooks “does not include a subjective review of the appropriateness of a particular material; that review is left for local decision making.” However, with the new law prohibiting certain themes and ideas, that role becomes a bit more complicated.

“Recent legislation tasked [Tennessee Department of Education] with building a framework to prevent propaganda like critical race theory from being taught in Tennessee classrooms,” Schwinn wrote. “The department is in the process of building this framework. We acknowledge the challenges that exist in balancing the state’s current process for curricula approval but are committed to enforcing the CRT law as the legislature designed it.”

Read the full letters from Steenman and Schwinn below. 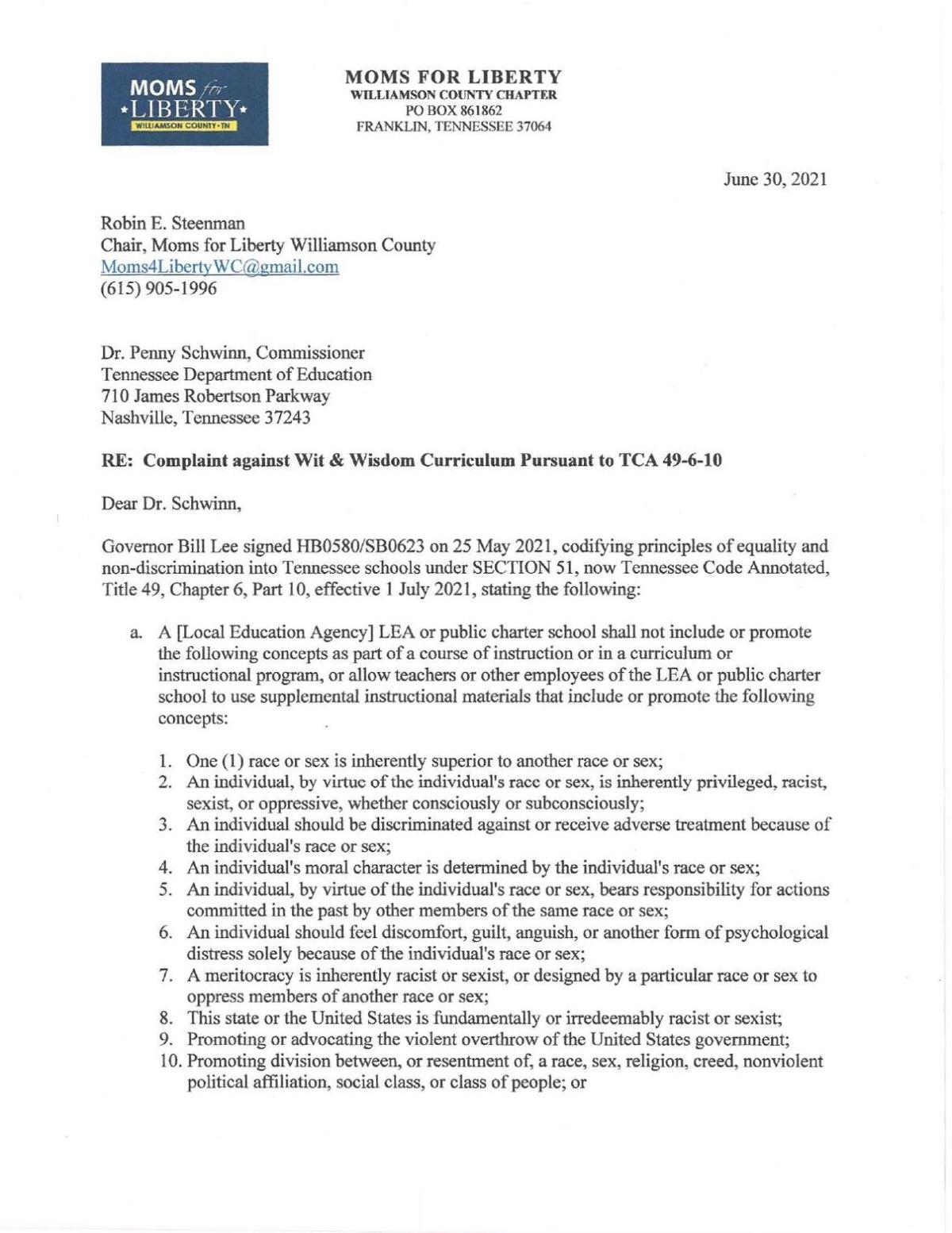 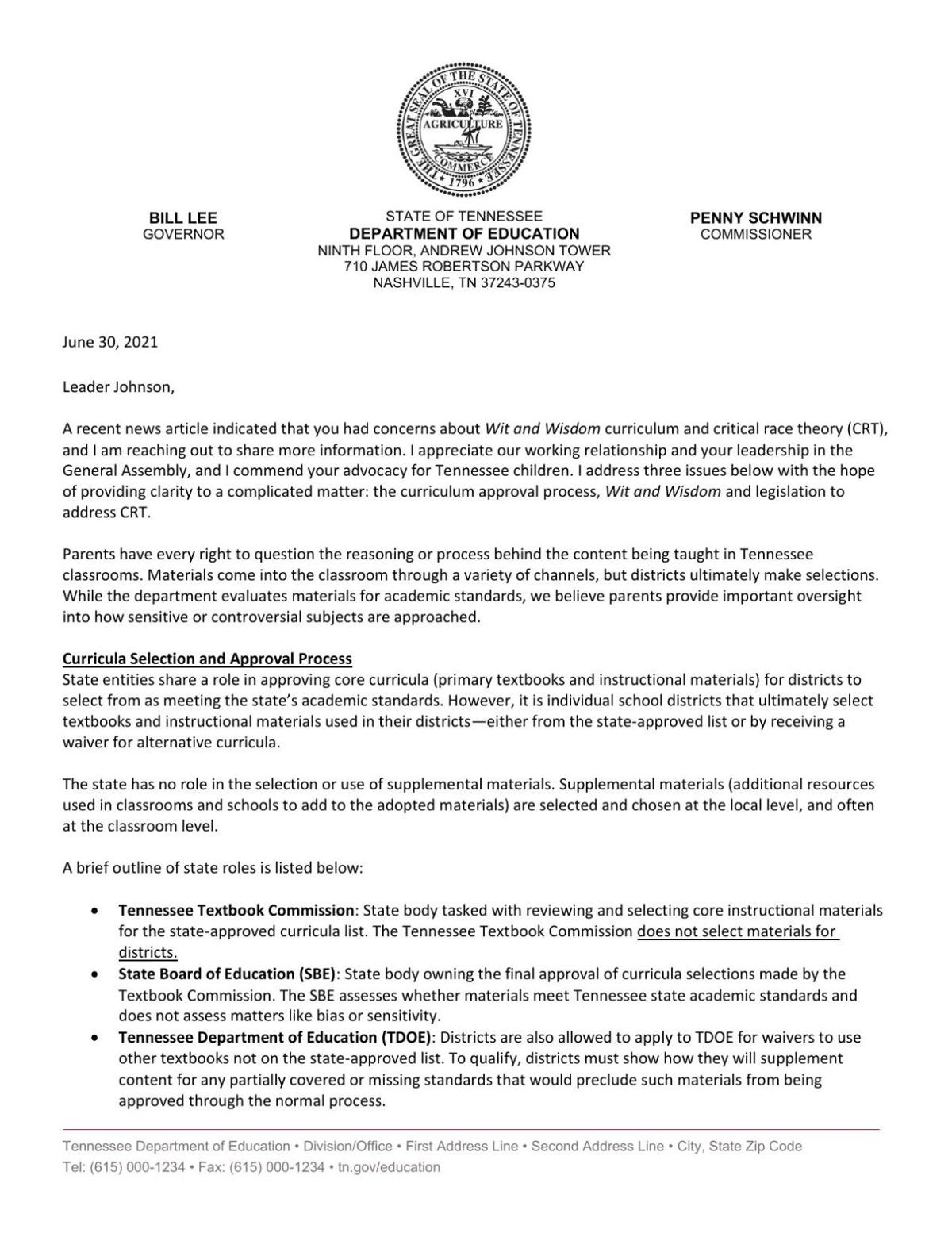 The reporter deems it important to note the spokesperson for this group has children in private school. Perhaps she tried public school and found the issues she is fighting today. At least she is speaking out about what is dividing our country and helping parents who have no choice in schools as she does. Additionally anyone who is a taxpayer to our public schools has a right to speak out about anything we are paying for! We all know and can see today what children are taught can affect our nation negatively or positively. Our children grow up to be our taxpayers, community leaders and future statesmen OR the group that doesn't work, wants hand-outs because our country stinks, is totally racist, everything and everyone who founded it was a fraud and there goes your social security and medicare....welcome socialism and communism. Let's realize our faults as a nation, but also as individuals whose sins should not decide a country and teach the truth as it was taught before....about our individual rights and why we started this country in the first place. Why not do a contrast and compare course on USA with other nations? Let the kids look through the eyes of kids with innocence and love based on how they treat each other and not their looks. It's simple. Good is not confusing that's coming from another place.