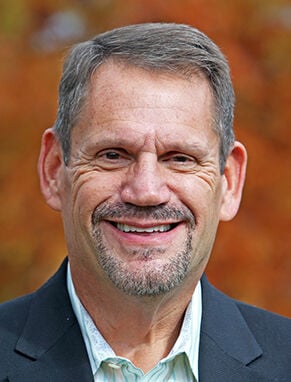 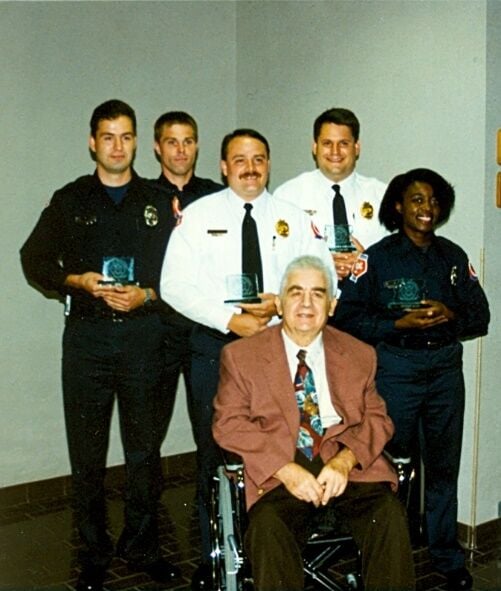 John Allman, standing in the back, received a Medical Service award in 1994 for saving a life.

John Allman celebrated his retirement with the city of Brentwood at an afternoon event at the John P. Holt Brentwood Library on Friday.

Allman was hired by the city in 1986 as a firefighter. He was promoted twice, earning the rank of captain with the Brentwood Fire & Rescue Department.

In 1996, while simultaneously serving as fire captain, he began overseeing the development of technology systems in city operations. Three years later, in 1999, he officially moved from the fire department to become the city’s first and only technology director for more than two decades.

“From being a firefighter in the very first days of the fire department’s existence to single handedly starting the technology department and driving the implementation and expansion of our entire technology footprint here with the city of Brentwood, John’s career in Brentwood has been far-reaching,” City Manager Kirk Bednar said. “He has also been the driving force behind numerous intergovernmental initiatives benefitting all of Williamson County and beyond. His departure means the loss of one of our truly foundational staff members, and he will be missed.”

“I never envisioned the scope of what the technology department would be today,” she said. “I don’t know that we can ever give him enough credit for how its developed over the years.”

Some of Allman’s biggest achievements while with the city of Brentwood included launching the technology department, implementing the city’s first email system in 1991, installing a fiber optic network throughout the city and managing the technology design for the new 55,000-square-foot police headquarters and 911 center.

Allman also served as the technical lead for the joint radio system project between Brentwood, Franklin and Williamson County. Other major accomplishments include being the first city in the Southeast to install mobile data laptops in police and fire vehicles. Allman also deployed several times on disaster response to help with emergency communications and led the city with its efforts in cybersecurity.

While with the fire department, he received two awards, a Life Saving award for helping save someone’s life and a Medical Service award in 1994 for another life-saving rescue.

“I am excited about slowing down and spending more time with my family, including my children and grandchildren,” Allman said.

He also plans to spend more time at his church helping with the audio-visual systems and at the Williamson County Emergency Operations Center as a reserve EMA.

Brentwood staff hired a technology consulting company to help recruit a new technology director. Sarah VanWormer, from the city of Battle Creek, Michigan, will start with the city of Brentwood on Jan. 31. She is an experienced government leader with more than 20 years of city IT and GIS experience.