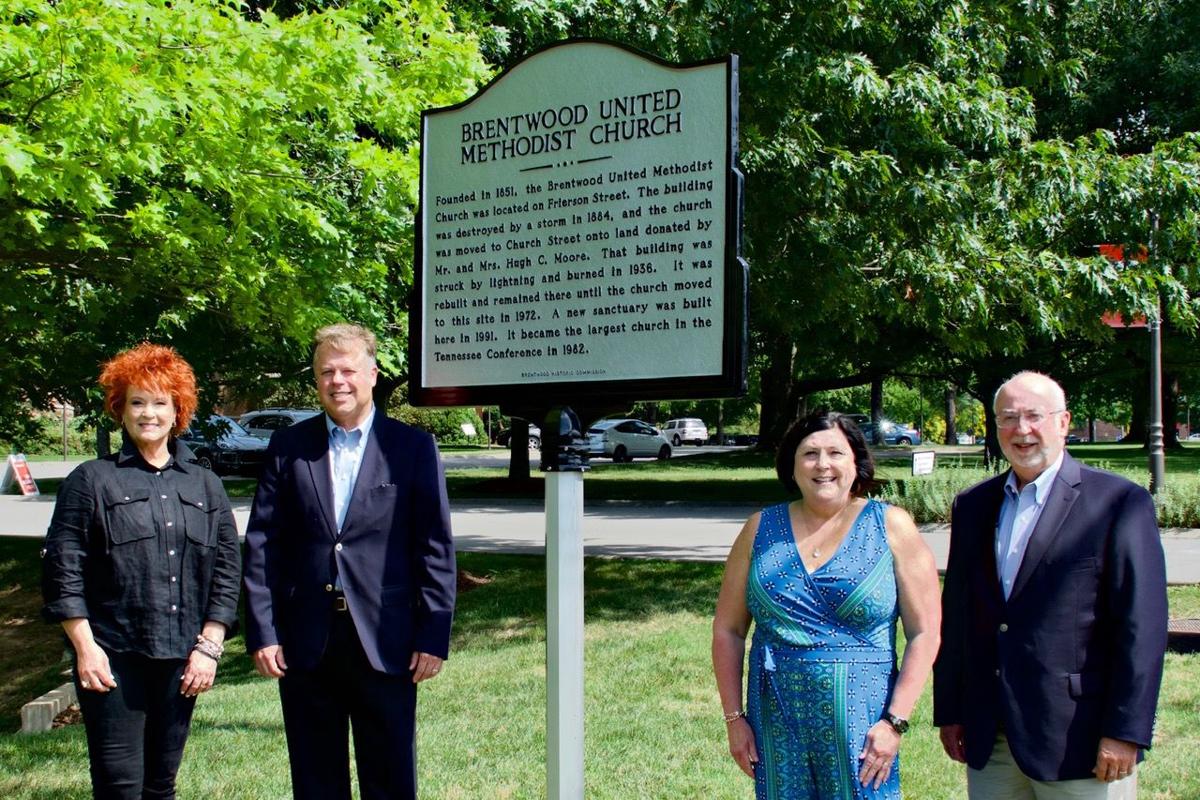 A marker was placed on the Brentwood United Methodist Church campus to signify the church’s long history. 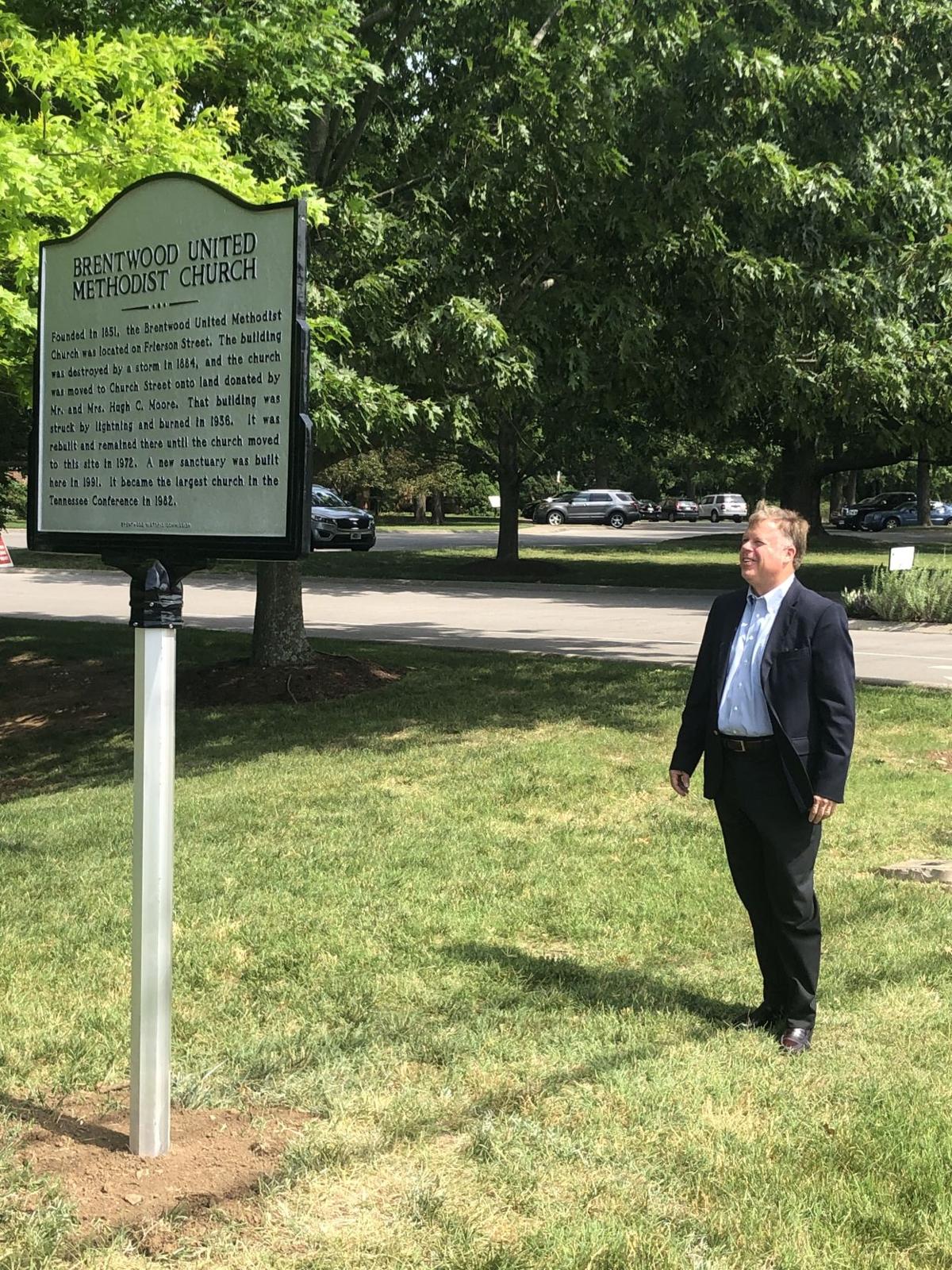 A marker was placed on the Brentwood United Methodist Church campus to signify the church’s long history.

A new marker was placed on the Brentwood United Methodist Church campus last week to signify the church’s long history.

The original marker was destroyed in an ice storm several years ago.

Chappell said the new marker symbolizes “168 years of history standing on the shoulders of everyone, who came before us.”

“Hopefully the church will be here for another 168 years,” he added.

Chappell, along with church historian Tom Blose and Sandy Walker, who is director of facilities, were instrumental in working with church lay leadership and the city of Brentwood’s Historic Commission to replace the marker.

The original sign was commissioned by the late Thomas Vance Little and the Williamson County Historic Society. Little, who had served as church historian, wrote “The History of Brentwood United Methodist Church” in 1991.

The new marker reads as follows:

“Founded in 1851, the Brentwood United Methodist Church was located on Frierson Street. The building was destroyed by a storm in 1884, and the church was moved to Church Street onto land donated by Mr. and Mrs. Hugh C. Moore. That building was struck by lightning and burned in 1936. It was rebuilt and remained there until the church moved to this site in 1972. A new sanctuary was built here in 1991. It became the largest church in the Tennessee Conference in 1982.”

"With the number of multi-generational families that we have in our congregation, it’s important to us that we never forget where we came from and the fact that for 168 years, our mission and spirit has stayed the same, despite the changes of our physical location.”

Long before Brentwood was incorporated in 1969, the church was serving the early residents of the community.

“The vision to receive and nurture people has been in the bloodstream of Brentwood Methodist since the day that Thomas Holt struck out to find a location for the first church,” Bishop Joe E. Pennel Jr. wrote in the preface of Little’s book.

The Tennessee Conference founded the church and assigned it a pastor in 1851. The original church was built on Frierson Street in 1857. That building was struck by strong winds, possibly a tornado, and was destroyed in 1884.

Members continued to meet at a store until a new building was constructed at the corner of Church Street and Franklin Road, where First Tennessee Bank sits today. The land was donated by Mr. and Mrs. Hugh C. Moore. The church continued to grow and additions were built to serve its membership.

In 1936, tragedy struck again as the church burned down after being struck by lightning. The Moore family came to the church’s rescue again, providing shelter in their home, known as “Mooreland,” during the cold months so that the congregation could still gather.

The new church site was completed in 1939 and continued to grow and flourish. By 1963, membership grew to 700. It was at this point that leadership had the foresight to realize the growing church would soon need a larger space.

The current location on Franklin Road was purchased from Robert I. Moore, son of Hugh C. Moore, who was also the organist at the church for 20 years. In 1972, the church opened its doors to the community.

Church members remember walking in the procession down Franklin Road from the old location to the current church. Items from the 1939 structure and stained-glass windows were moved to the chapel within BUMC to preserve the rich history of the church.

In 1982, Brentwood United Methodist was recognized as the largest church in the conference.

The history of the church is in the membership with names such as Holt, Moore and other Tennesseans of notable influence, who worshiped at Brentwood Methodist. The late Sarah Cannon, known to the public as “Minnie Pearl” was also a member of the church.

Blose is working within the conference to have historic designation in the Methodist Church.