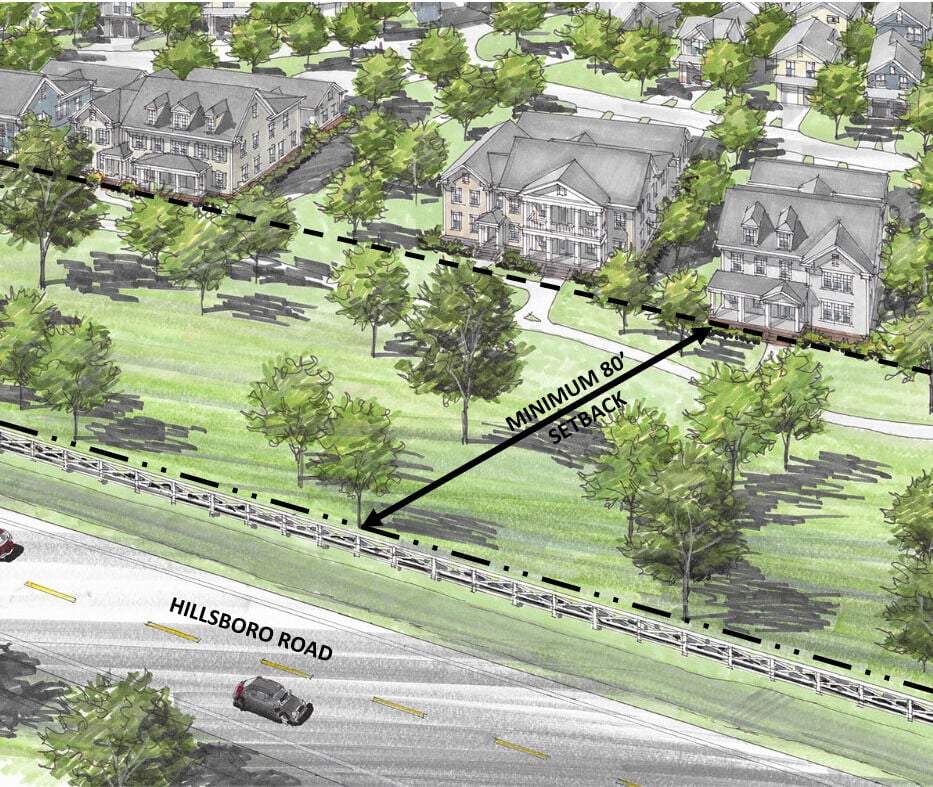 A rendering provided by Gamble Design Collaborative of multiplex units fronting Hillsboro Road in the proposed plan for Brownland Farms in Franklin.

A rendering provided by Gamble Design Collaborative of multiplex units fronting Hillsboro Road in the proposed plan for Brownland Farms in Franklin.

A residential development long in the making for Franklin’s Brownland Farm off Hillsboro Road has been deferred another month to give staff time to work through new concerns.

On Tuesday night, city engineering staff revealed information that would impede emergency personnel in the event of a flood in the development area.

Brownland Farm has been a beloved equestrian event space for more than 50 years and abuts Christ Community Church to the north.

The church has agreed to allow some of their land to be developed, and one of the parcels in the 233-acre project is attached to the Monticello neighborhood to the east of Hillsboro Road, across the street from the rest of the development.

Included in the plans for a residential community are 205 single-family homes, 177 townhomes, 24 multiplex units and 64 multifamily units, as well as 3 miles of walking trails, a pool, clubhouse and fishing pond. Ten percent of the units would also be sold as “affordable housing.”

The city requires an amendment to Envision Franklin for development in the area, in which 70% of the proposed units would be in the floodplain. Currently, the land is zoned for civic-institutional and agricultural use and would need to be rezoned for a planned district.

With 136 acres set aside as open space, developers have sought rezoning as a conservation subdivision, an idea the planning commission narrowly rejected due to density the project creates with multifamily units.

Planning Supervisor Amy Diaz-Barriga said the project would likely be recommended if it were in a different area.

After running independent studies, landscape designers and project engineers have come up with a solution for the floodplain issue: they intend to create infill, adding an additional 28 million gallons of storage volume to the area. City Engineer Paul Holzen told the board the impact would be more localized.

“This isn’t creating some magical benefit for the rest of the city,” he said.

Though city staff and the board have heard about the project from developers several times over the past two years and many flooding concerns seem to have been alleviated, a new problem arose Tuesday.

Holzen said “miscommunication” led to staff’s a recent understanding of how the development would be cut off during a flooding event, similar to the Heath Place neighborhood off Lewisburg Pike.

Though the development is in the 500-year floodplain, Holzen said in a flood, emergency personnel would have to cross 2 feet or more of water at the new Mack Hatcher Parkway bridge.

“It makes this site very, very difficult to access in that 100-year flood event. ... Before we approve this rezoning, this density, this development, this issue needs to be worked through,” he said, noting that the issue also affects a 150-bed assisted living home near the Williamson County Recreation Center.

“This just seems to me, it’s the 11th hour and we have been talking about this for months and months, and there’s studies,” Ward 1 Alderman Bev Burger said. “I don’t understand why it’s just now come to light that there’s more inches than we thought. How does it pop up at the last minute here?”

“Previously, we thought it [the water level] was less than a foot,” he said, but additional information from the project’s engineer shows a higher elevation that changed the numbers.

As of Tuesday, city staff hadn’t yet met with the development team regarding the new information.

Having been an engineer for 27 years, Land Solutions CEO Kevin Estes expressed his frustration during the public comment portion of the meeting.

Estes said he met with the fire department and city staff in December of 2020 to discuss the road width concerns, and thought things were settled until hearing Tuesday of the road access issues.

Estes proposed to allow the arterial road fees to go towards working with the fire department on an emergency road.

Over a dozen nearby property owners also attended the meeting to voice support or speak out against the project.

Robin and Michelle Anderton, owners of the farm and longtime residents of the community, spoke Tuesday night in favor of their property’s development.

“For months, my family has taken personal attacks, name-calling, hateful remarks on social media, and dozens of trespassers over the past two years,” Michelle Anderton said. “It’s more than property rights. It’s just simple humanity. ... We care too much about this community to not pick somebody that is right for this project, or the wrong team. I truly believe these gentlemen are fully committed to making sure this development is right for Franklin.”

“You’ve lived on this land, you’ve taken care of it, been good stewards of it, and now you want to get rid of it,” she said. “I’m not an engineer, I do not know about that, but we’ve had them here. ... I have to believe them.”

By a vote of 6-1, with Alderman Ann Petersen dissenting, the rezoning vote for the development was deferred until the Oct. 12 meeting.