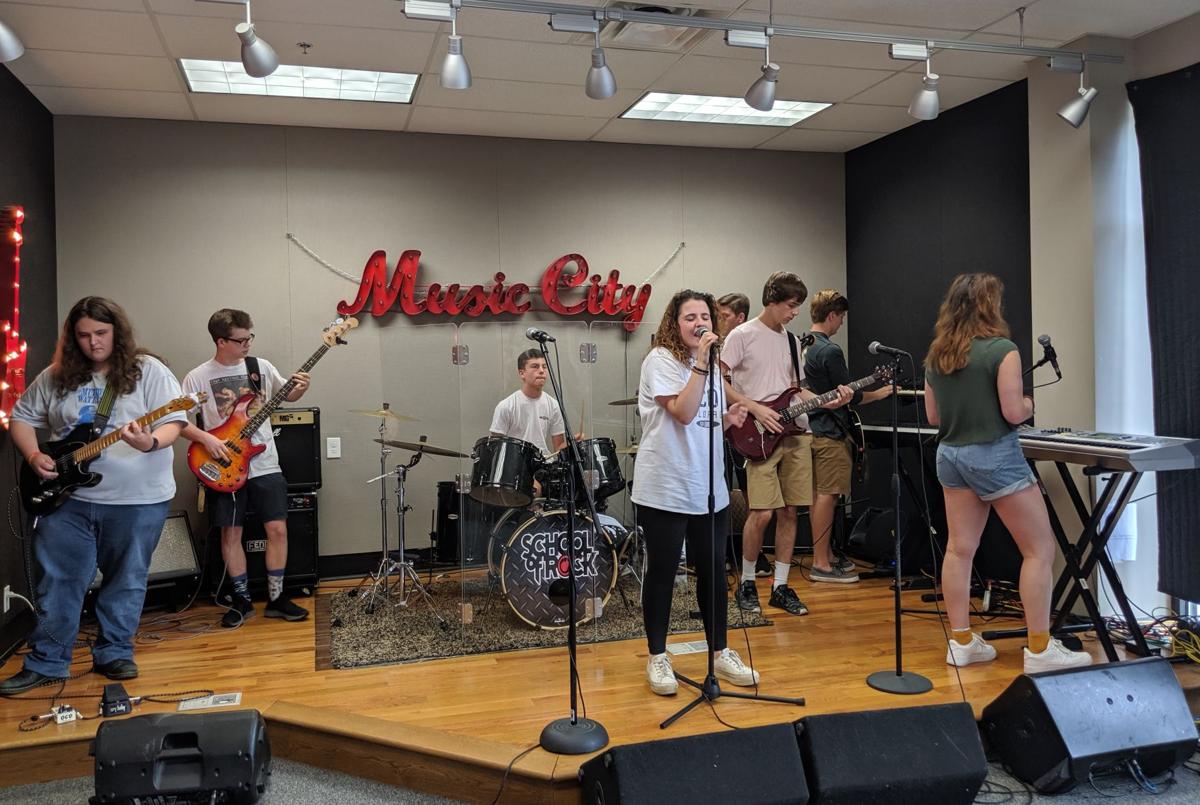 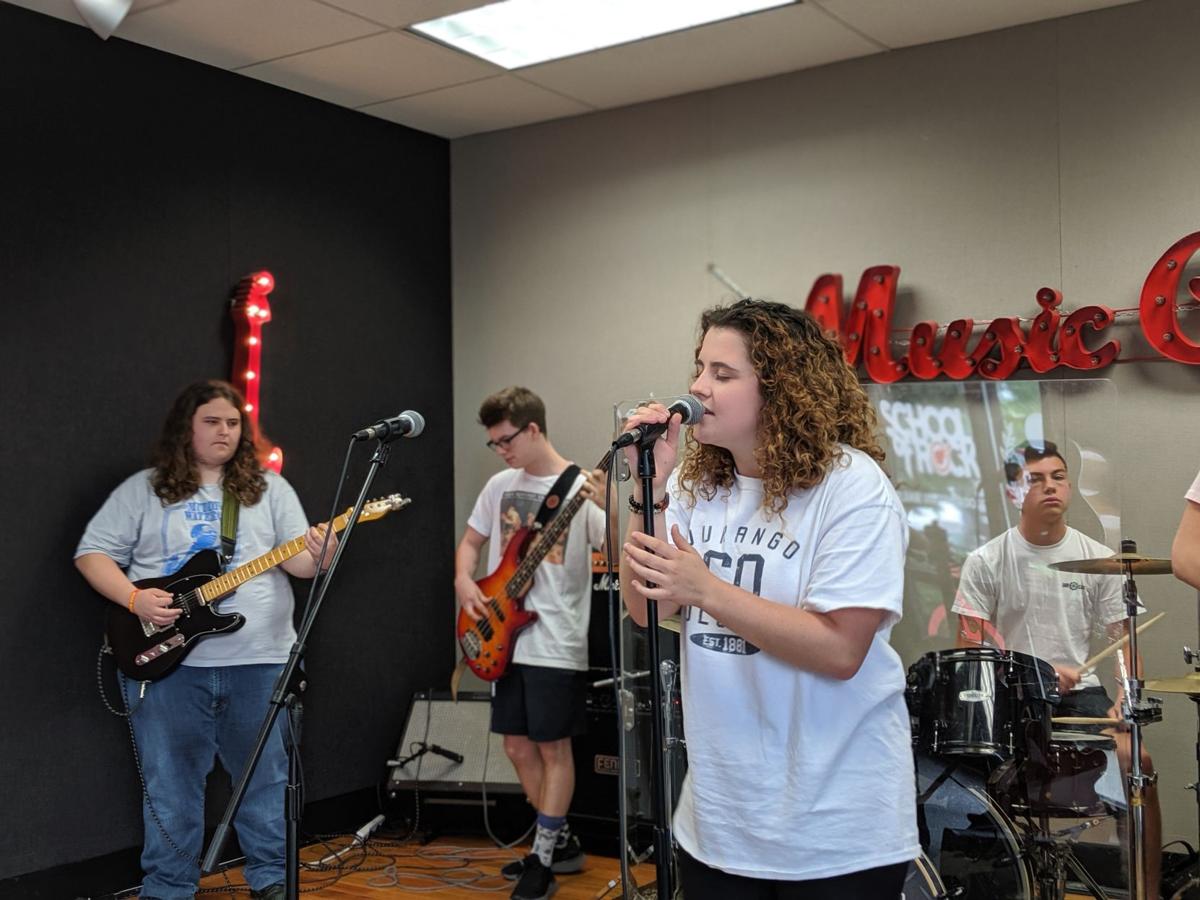 Ella Talerico leads the band behind the mic, supported by Carrington Heimert-Train on background vocals and keys. 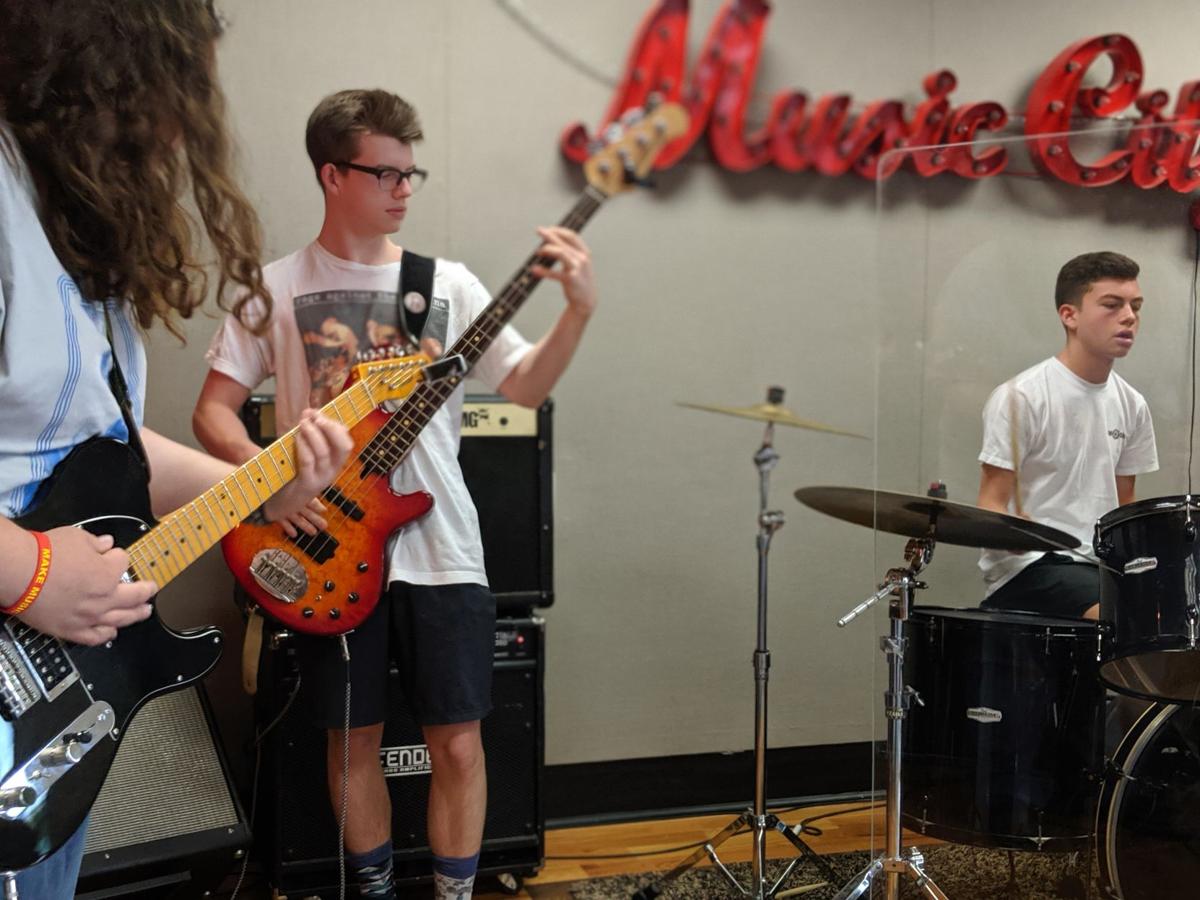 Blayne Dillon, on guitar; Evan Boucher, on bass; and Blake Thompson, on drums, practice a rock-pop mashup for the big gig.

Ella Talerico leads the band behind the mic, supported by Carrington Heimert-Train on background vocals and keys.

Blayne Dillon, on guitar; Evan Boucher, on bass; and Blake Thompson, on drums, practice a rock-pop mashup for the big gig.

School's out for summer, but for the kids in the School of Rock house band, the hard work is just beginning as they prepare to take the stage at Bonnaroo, one of the largest music festivals in the country.

At a recent rehearsal in Cool Springs, members of the eight-member School of Rock band showed their diversity by jumping from rock classics by Led Zeppelin and Rod Stewart to the more recent synth, psychedelic pop band MGMT.

It’s no wonder that the rock-stars-in-the-making are already showing their skills in showmanship and musical technique that will be fully showcased in front of thousands at Bonaroo.

After all, the band has recorded with Deep Purple, which might have been practice enough to prepare it for the stage.

The band members, all 18 and younger, have musical experience ranging from four to 11 years and are building upon that experience each day spent at the School of Rock, focusing on, well, rock music. Co-owners Kelly and Angie McCreight explained that although it has dabbled in original content, the band tends to stick to rock covers, but rock comes in many different shades.

“We do have kids that write original stuff, but typically when we play, we’re really trying to play to the audience,” Angie said. “We try to go from funk to Zeppelin to R&B, and we just kind of mix it up.”

Blayne Dillon, one of the band’s guitarists, explained that several different kinds of music fall under the category of rock — one reason why he enjoys playing the genre.

“I think rock music is a genre that encompasses a lot of other genres in how it blends with others,” Dillon said. “If you look at rock ’n’ roll and the history of it, you see elements of country and blues and folk and all those things thrown and mixed together. And there’s always been genre-blending, so it’s kind of an all-encompassing genre.”

The original School of Rock started in Philadelphia in 1998 as a school for kids to learn rock music through private lessons and, more importantly, through performance. There are now more than 200 locations across the world, including one in Nashville and one in Franklin, where the band is holding rehearsals this week for one of the biggest music festivals in the country.

Angie said students audition for a spot in the house band, although she tells the kids in the school to treat every performance as an audition. She explained that new members are selected each year, but some decide to stick around for several years, speaking to the value of the school’s community.

According to Kelly, the School of Rock has a unique take on music education because it’s highly performance-based, allowing the kids to learn through experiences such as performing at the Ryman, opening for Night Ranger and recording with Deep Purple.

“Our goal is to teach music through performance, and that means getting them out and getting them playing,” Kelly said. “They can practice and practice and practice, but they really learn when they’re out there in the game. They can practice in their room in a small setting, but we want to put a show on. And we don’t do recitals, so we’re playing at the Hard Rock, and 12th & Porter and Mercy Lounge.”

However, Angie said they also play smaller shows, such as the opening of the Spring Hill Library, not only to practice and increase exposure, but also to give them the experience of professional musicians making their way through the industry.

Kelly explained that these experiences — big and small — helped the band gain a reputation, which is, in turn, now bringing them to the Bonnaroo stage.

“We started small, and we had to prove ourselves,” Kelly said. “And people are like, ‘Oh, they’re just a bunch of kids.’ And then they hear them, and they go, ‘Oh, these guys are really good.’”

He said he and Angie treat the band members as professionals, and the kids take their music seriously, which has allowed them to land slots in festivals and shows in major venues.

“Bonnaroo is huge, and there are lots of ins and outs to it,” Angie said. “I don’t think it’s hit any of us, really, yet.”

The School of Rock house band will perform a 45-minute set on at 2 p.m. Friday on Bonnaroo’s How Stage. They will then begin their summer tour July 1 and come back to perform at Pilgrimage Music & Cultural Festival in September.