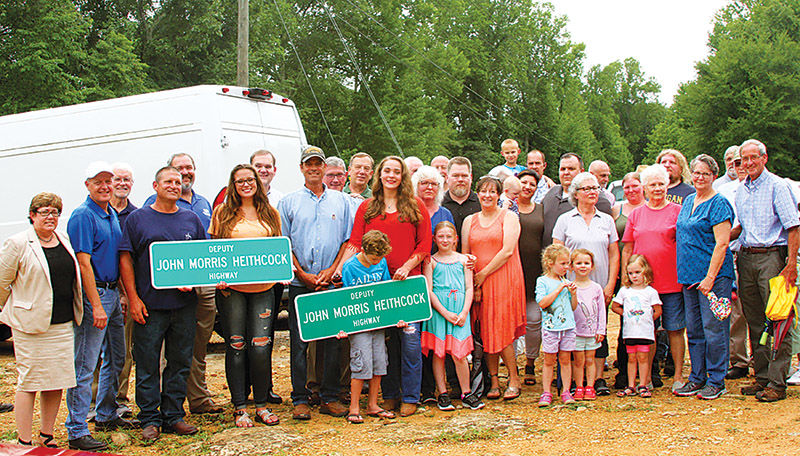 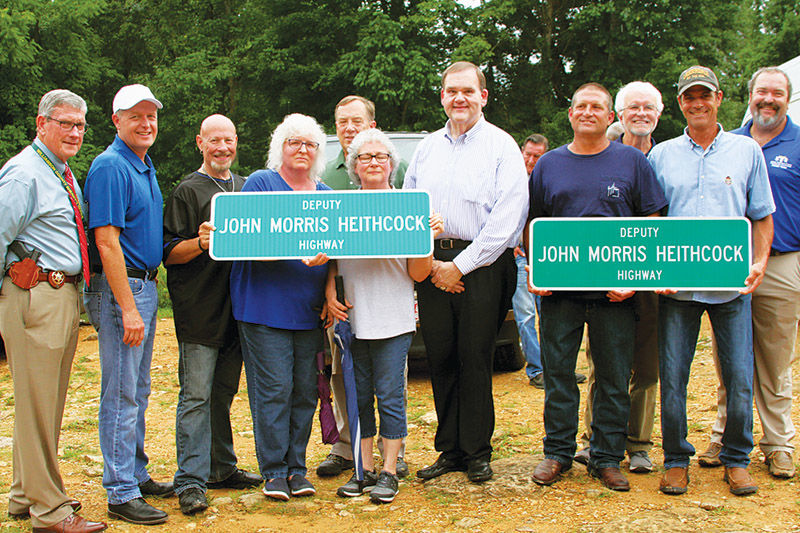 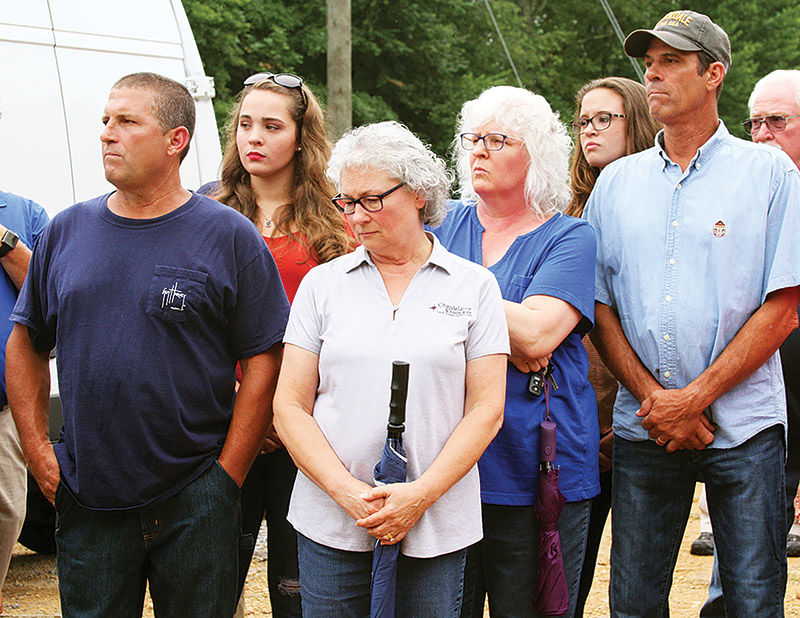 The children of Deputy John Morris Heithcock were 14, 10, 7 and 3 when he was murdered on June 28, 1972. Forty-seven years later, Timothy, Teena, Tammie and Tony were on hand for a ceremony dedicating a section of Highway 100 from the Williamson-Hickman county line to the Williamson-Davidson county line as the Deputy John Morris Heithcock Memorial Highway.

The children of Deputy John Morris Heithcock were 14, 10, 7 and 3 when he was murdered on June 28, 1972. Forty-seven years later, Timothy, Teena, Tammie and Tony were on hand for a ceremony dedicating a section of Highway 100 from the Williamson-Hickman county line to the Williamson-Davidson county line as the Deputy John Morris Heithcock Memorial Highway.

Heavy clouds and a light drizzle on Monday afternoon set the solemn mood Monday for the dedication of a stretch of Highway 100 to be named Deputy John Morris Heithcock Memorial Highway.

Family members, close friends and local officials gathered near the Williamson-Hickman county line for the dedication at a location about half a mile from where Heithcock, a 32-year old deputy, was murdered just over 47 years ago.

Williamson County Sheriff Dusty Rhoades and Fraternal Order of Police President Andy Green, a retired Franklin Police Department detective, thanked Tammie Heithcock Shelton, one of Heithcock’s four children, for her persistence in making the memorial road happen. She was 10 years old when her father was killed.

“It’s been so long,” she said. “It’s really nice, after all this time, for him to be recognized. It’s a great honor.”

The process began two years ago, during a memorial service on the 45th anniversary of Heithcock’s death.

“Somebody told Aunt Kathy they were going to do a sign,” Shelton said, referring to Kathy Heithcock Beard, Heithcock youngest sister. “I followed up after everybody in the family kept saying ‘When are they going to do it?’ I kept bugging Amanda at the representative’s office.”

”I’m so glad this finally happened,” said Green, who organized the dedication ceremony.

That night the Heithcock family had just returned home from a day of church and then dinner at Deputy Heithcock’s parent’s home when he received a call for assistance in serving a traffic citation.

According to police reports, earlier that evening Fairview Police Chief William “Shorty” Mangrum had attempted to apprehend 44-year-old Edgar Roger Conley of Bon Aqua for speeding and reckless driving. During the chase on Highway 100, vehicles reached speeds of 110 mph. Conley, with his 18-year-old son also in the vehicle, finally pulled behind the Fairview Auto Parts store with Mangrum right behind him.

Conley exited his vehicle, according to Mangrum’s court testimony as reported in the Review Appeal. As Mangrum approached him on foot, Conley said, “Don’t come any closer.” He raised a 12-gauge shotgun, cocked the hammer and ordered the chief to leave.

Mangrum backed off, returned to his patrol car and radioed for help.

Deputy Heithcock lived nearby and was the first to respond. He accompanied Mangrum to Conley’s home, near the Williamson-Hickman county line, to arrest him for speeding, reckless driving and an added charge of assault with the intent to murder. When Heithcock and Mangrum arrived at the Conley home, Conley was waiting for them. Heithcock exited his vehicle and was shot in the chest at close range. Conley used the same 12-gauge shotgun with which he threatened Mangrum.

After the dedication, several family members took a half-mile ride to the actual sign, which stands about 100 yards from the murder scene. Timothy Heithcock was just 3 when his father was killed. Most memories of his father are stories he’s heard, but he listened intently and holds them tightly in his mind and his heart.

According to news reports, a second shot went through the windshield of Mangrum’s patrol car but the police chief was unharmed.

Conley ran into a nearby wooded area and Mangrum radioed for additional help.

”Deputies came — it took them 45 minutes to get to him from Franklin,” Timothy Heithcock said. “When they got there, he had been shot about an hour before. They took him to Williamson County Hospital in Franklin. (Conley used) double-ought buckshot. It cut his arm off. They said Daddy didn’t have experience, but he was a MP for 13 years when he was in the Army.”

A National Guard MP and then regular Army MP for 13 years, Heithcock always wanted to be in law enforcement, according to his son. After a few years with Ford Glass, he took a leave of absence and accepted a job with the Sheriff’s Department under Sheriff Fleming Williams. Heithcock was with the department about six weeks when he was killed.

Timothy Heithcock stared off as his own memories flashed in front of him.

Three generations of the Heithcock family, including the deputy’s four  children, 11 grandchildren and some of his great-grandchildren, were at the dedication. Missing was Heithcock’s wife, Viley Sullivan Heithcock. She died a year ago.

Rita Sullivan Gillette said that Viley, who was her sister, and Viley’s children came to live with her after her Heithcock’s death.

“We went through grieving with them,” Gillette said. ”Everything was so different.”

“This is a good thing,” Timothy Heithcock said. “It’s time; it was needed to be done. I’m glad he’s recognized. Mama never got over him.”

Other officials at the dedication include County Commissioners Dwight Jones and Ricky Jones,  former Fairview Mayor Patti Carroll, who is now the Williamson County coordinator for U.S. Rep. Mark Green, national, state and local officials from the Fraternal Order of Police and several members of the Williamson County Sheriff’s Office.