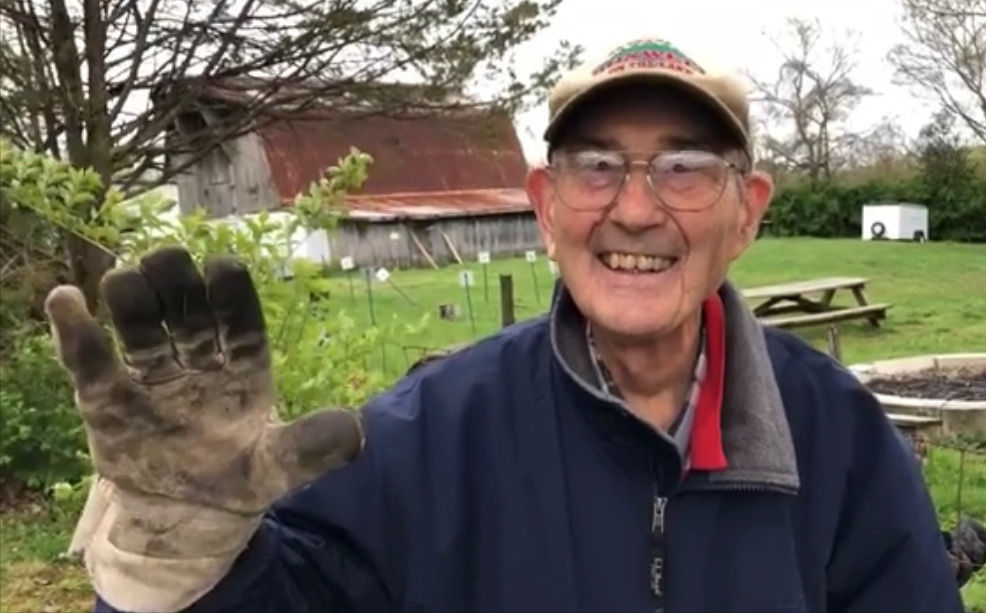 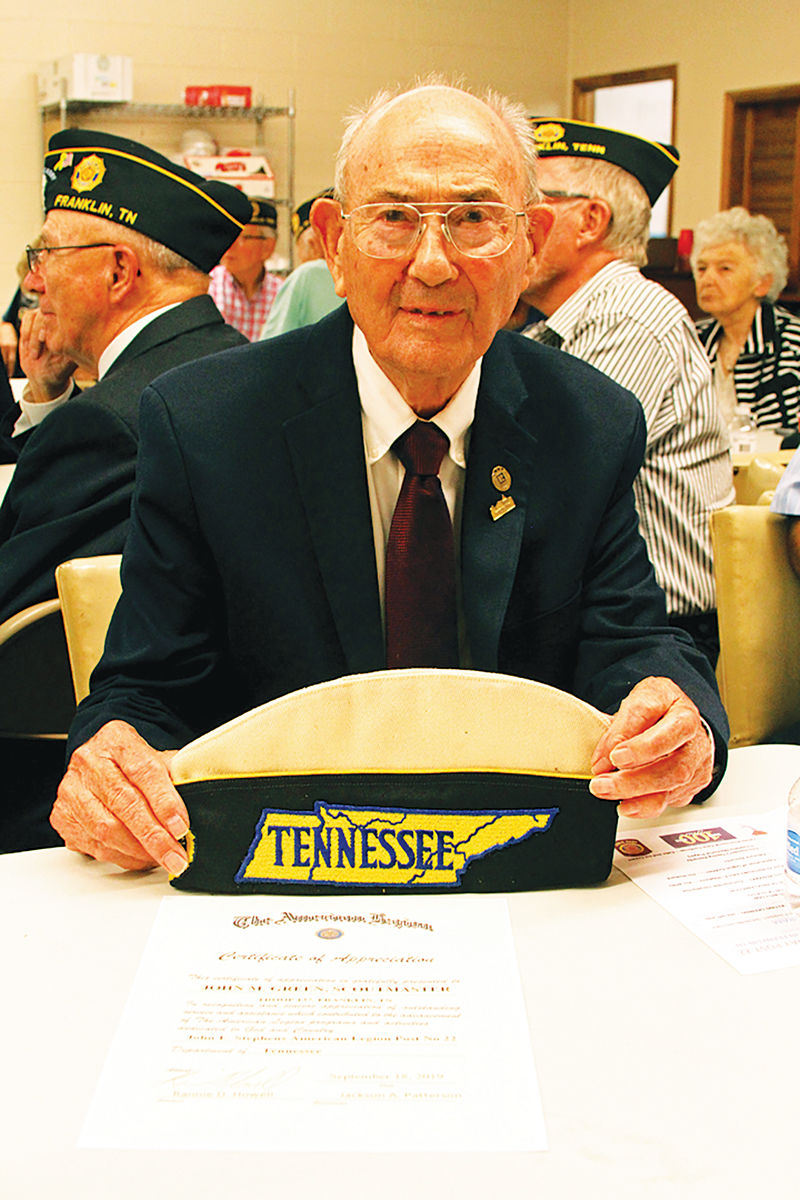 John M. Green Jr. with his father’s American Legion hat. John M. Green Sr. was in WWI and was one of Post 22 founders. 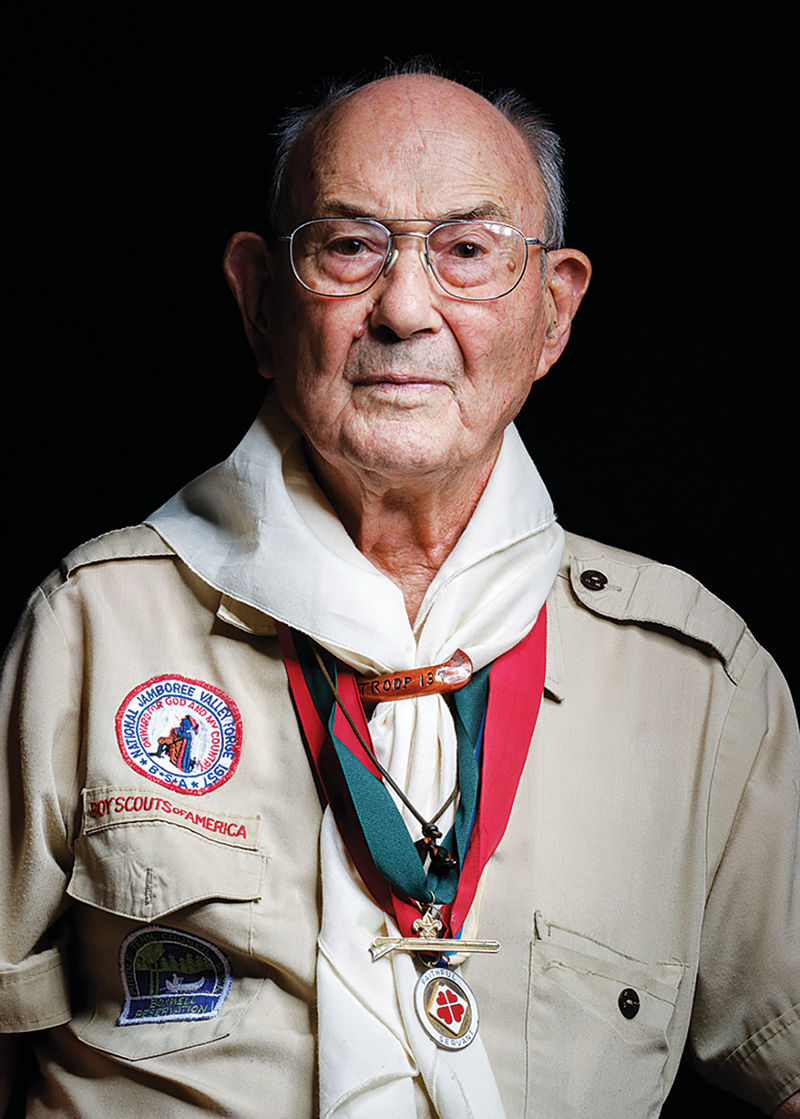 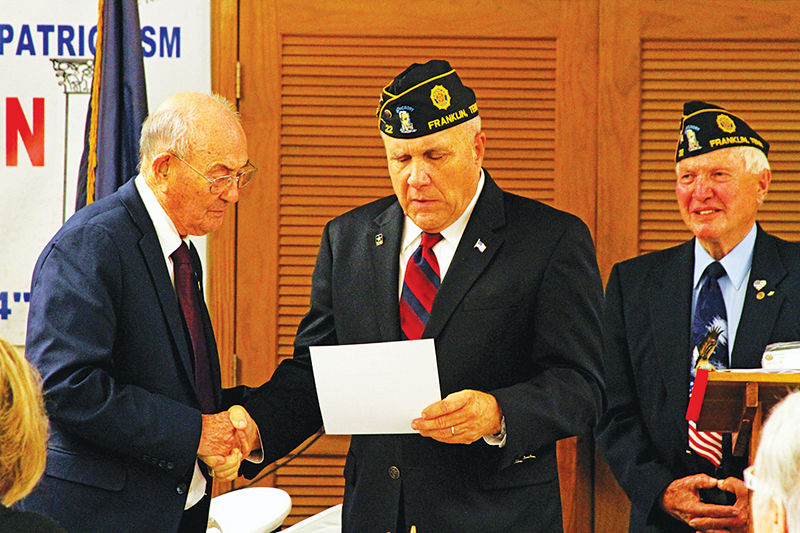 Former Commander and Adjutant Jim Howard watches as Jackson Patterson, current Commander of Post 22, recognizes member John M. Green, a World War II veteran who “was aboard ship heading to the South Pacific when the war ended,” for his many years of of service to the American Legion and helping boys become young men through Boy Scout Troop 137, whcih he began with four rowdy boys that no other troop would take in.

John M. Green Jr. with his father’s American Legion hat. John M. Green Sr. was in WWI and was one of Post 22 founders.

Former Commander and Adjutant Jim Howard watches as Jackson Patterson, current Commander of Post 22, recognizes member John M. Green, a World War II veteran who “was aboard ship heading to the South Pacific when the war ended,” for his many years of of service to the American Legion and helping boys become young men through Boy Scout Troop 137, whcih he began with four rowdy boys that no other troop would take in.

John Merritt Green, 91, died Saturday at his home after suffering injuries from a fall days earlier.

Mr. Green was a husband, father, grandfather, Navy veteran, Sunday school teacher, businessman and community leader, but he was most known for his more than 69 years of guiding boys to become men through the Boy Scouts.

He is described by friends and those he impacted as kind, consistent, unassuming, humble, patient, helpful and friendly. He was a mentor and a man of integrity who led by example.

Mr. Green began his life of service at the age of 17. After graduating from Battle Ground Academy in 1944, he joined the Navy. He was aboard a ship in August 1945 and heading to the South Pacific when the Japanese surrendered and was stationed  in the Philippines, where he witnessed the brutalities of war.

When Mr. Green returned home, he attended Vanderbilt University (Class of 1950) and became a member of the Sigma Chi fraternity. Years later, in 2016, he received the fraternity’s Significant Sig award that recognizes alumni who brought honor and prestige to the fraternity through their achievements in their chosen careers.

After graduation, Mr. Green went to work in his father’s insurance agency, founded in 1920. In the early 1960s, he expanded the family business to include the sale of real estate and was one of the five founders of the Williamson County Board of Realtors, now the Association of Realtors.

A simple request by the Franklin Police Department to start a Boy Scout troop changed his life. Mr. Green had no experience in Scouting and no children at the time, but with the now late Jack Pinkerton, he donned the Boy Scout uniform for the first time as an assistant scoutmaster. The two resurrected Troop 153 and Mr. Green began a lifelong journey of mentoring and leading boys.

In 1956, Mr. Green was introduced to a group of “unruly” boys who didn’t seem to fit into other Boy Scout troops. He took them under his wing and began Troop 153.

After almost 20 years, in 1972, the troop disbanded, so Mr. Green could spend more time with his young children and his business. Eight years earlier, in 1964, he married Louise Bailey Nunnelly, his bride of 54 years.

The hiatus didn’t last long. In 1975, Mr. Green started Boy Scout Troop 137 chartered by Fourth Avenue Church of Christ and began a legacy impacting several generations of boys in an old tobacco barn on his farm.

Both of Mark Tumblin’s sons — Jesse and Cody — were members of Troop 137 and Tumblin joined the troop as a parent leader. Mr. Green had a way of enlisting fathers along with their sons.

“Initially, I was the parent committee chair liaison between Fourth Avenue Church of Christ and the Scout troop,” Tumblin said.

The first project for each tenderfoot was to make a Scout stave (walking stick).

“It had notches every 12 inches to measure, a top hole for a straight needle and a cork to use as a compass,” Tumblin explained.

Then he took the youngsters on a hike around Franklin and Mr. Green would tell them stories about the town where he grew up.

“He’d carry their parents to the barn and tell them ‘y’all parents need to go out and get your boys an iron skillet,’” Tumblin said imitating Mr. Green.

In the wilderness Mr. Green cooked all his meals in the iron skillet he carried in his own backpack, which many suspect was an original issue backpack.

“We did it, but most parents didn’t,” Tumblin added. “They got the lighter, more modern equipment.”

“That iron skillet had a lot more meaning,” said Jesse Tumblin, now a professor at Boston College and Annapolis. “He showed us the way things are. If you’re consistent in what you believe, everything will come out all right. He was unique in 1944 and he was unique in 2019.”

Scout meetings were held once a week, but Mr. Green had “Scout business” every day, according to Fred Reynolds, who became a Scout leader when his two sons joined Troop 137. On Saturdays, Mr. Green would be found at the barn ready for any boy to drop by in need of help with a merit badge or advice.

He seemed to sense each boy’s interest and provided opportunities for them to discover and learn.

“Mr. Green came to the adults one day and said, ‘I just bought a silo,’” Tumblin recalled. “He used to come up with all sorts of ideas.”

That idea was to create an observatory. One of the new parents worked at Dyer Observatory and he got a telescope for the troop. Mr. Green had a plan, the fathers carried it out and the boys learned about astronomy.

“He was dedicated to ensuring his Scouts had the full scouting experience.” With help from parents, he set up a ham radio station for boys interested in amateur radio. He also made sure they learned Morse Code. They added a climbing wall,  on-site rappelling, gardening, woodcarving, archery, a knots and lashings room, a map room, a first-aid station, a library, a coal forge, bee-keeping and orienteering.

“He never got flustered, no matter what,” Reynolds said. “When I first started planning trips for the troop, I asked John how he handled the boys, as we all understand, boys will be boys.”

His reply was, “Fred, I have never had any trouble out of the boys.”

That was proven many times. On a hiking trip in Missouri, three Scouts wandered away from the group. When they arrived at camp, Reynolds notified the ranger and was beginning to organize a search party when he stopped and asked Mr. Green what he would do.

“Don’t worry about it, they’ll show up,” Mr. Green told him.

Fifteen minutes later, they did.

Austin Thompson earned his Eagle Scout rank in 2013. His project was a bench for Oak View Baptist Church. Although Thompson was never much of a woodworker, the bench is still sturdy and in use because of Mr. Green’s guidance.

“I am forever grateful for Mr. Green imparting his scouting and personal wisdom upon me,” Thompson wrote in an email. “His reputation and character are qualities I will always admire. Mr. Green was one of the people who molded me into the person I am today.”

Like many of the Scouts, Thompson has fond memories of working his shift at the annual Christmas tree sale, which funds troop activities such as wilderness camping and High Adventure trips.

While encouraging boys to reach their full potential was a large part of his life, Mr. Green also found time to serve in other ways. He taught Bible classes on Wednesday and Sunday nights at his church for more than 30 years and was a member of the American Legion Post 22.

“John certainly embraced the American Legion objectives supporting the Boy Scouts,” said Post member Jim Howard. “That was his life. I feel so good we had an opportunity at our last meeting to recognize him.”

In 1990, Mr. Green was named Franklin Citizen of the Year. In 2010, he was inducted into the Boy Scout Hall of Leadership and also received Franklin Tomorrow’s Anne T. Rutherford Exemplary Community Volunteer award.

A celebration of life is scheduled for 11 a.m. Saturday at Heritage Church of Christ, at 1056 Lewisburg Pike in Franklin. Burial will follow at Mt. Hope Cemetery. Visitation with the family will be from 4 to 8 p.m. on Friday and one hour before the church service.