"We are at a crossroads and need to take action," Anderson said last week upon announcing the reinstated mandate. "We are collaborating with all the mayors, schools and medical staff as we are seeing active cases rise throughout the county."

On July 3, Tennessee Gov. Bill Lee signed Executive Order 54, allowing county mayors to require masks in public spaces where social distancing is not possible. Lee has continued to renew that order every month since, including on Friday, Oct. 30, when he extended the order through Dec. 29.

According to Anderson's order, the local mandate will remain in effect over the next two months "unless sooner canceled or unless extended pursuant to subsequent authorization by the governor."

Violation of the declaration is a Class A misdemeanor, which is punishable by a fine of up to $2,500 and/or imprisonment of not greater than 11 months, 29 days, according to the Tennessee Code Annotated (TCA).

"While it is the hope and expectation that Williamson County citizens will comply with this order out of a sense of civic duty and respect for their fellow citizens, and attempts at education and communication are the preferred methods of obtaining compliance, state law provides for enforcement of this order if necessary," the declaration reads.

All municipal mayors except Spring Hill Mayor Rick Graham approved the reinstatement of the order last week. Graham shared during a local event on Friday he wishes the authority to require masks was delegated to municipalities, as Spring Hill falls within both Williamson and Maury counties.

"I couldn’t support this past mandate for Williamson County because of the businesses in Spring Hill," Graham said on Friday. "The north side of Spring Hill businesses tell us that they suffer loss of business because … some people will not wear masks, and they would go shop in south Spring Hill."

Anderson said last week he thinks the issue of masks has become "way too political."

"It’s always a controversy," he said. "Everything during these days seems to be a controversial statement."

But he stands by his decision despite the opposition he has received from some community members.

Last week, 10 hours after the mandate went into effect, a group estimated to include more than 250 people gathered at the Franklin Public Square, demonstrating against the mandate. 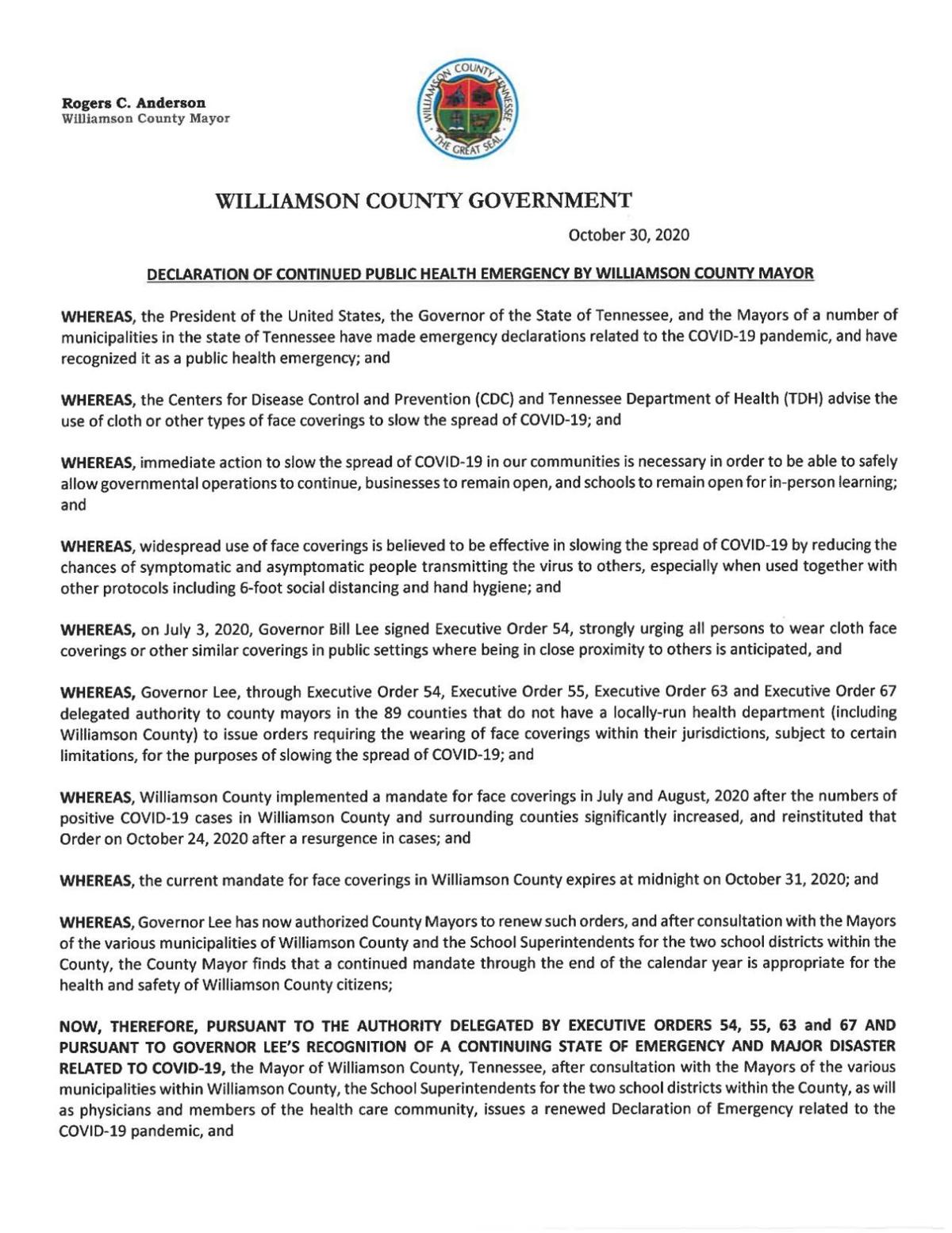 It is truly remarkable and ironic how rapidly, panicked politicians will usurp their authority in their impotent efforts to 'protect' citizen's 'security'! They are charged with protecting our liberties, not our 'security'. In the end, masks have not and will not stop this virus from running its course, but will only prolong the inevitable. Yet, politicians are willing to stomp on our liberties to show they 'care'. They'll do anything to 'proclaim' they are 'doing something'. This 'feel good' move by the mayor portends a much more ominous future for us, a future where citizens are adept to government mandates in any form. A much greater threat to the citizens of Williamson County, is the fact that our local county government is almost 600 million dollars in debt! This is a "real" threat to our future economic livelihood yet, the mayor refuses to address these 'symptoms' with any meaningful resolve....oh but this mask 'mandate'....that'll save us! I'm sure there are many willing to give up their freedoms and liberties by lining up to government's unconstitutional rules, regulations and mandates, for the 'promise' of 'security' from an 'inept' government that can't even balance their own budget without incurring mind boggling debt... NOT ME! This 'exercise' in unconstitutional power wielding, is a test of the future resolve of freedom loving citizens. Yes, I'll wear masks were local businesses that I patronize require one (that is much, much different) but I'll be joining the protesters when this virus is proclaimed to be 'back' and the mayor 'claims' he is forced to 'lockdown' our economy again with more stay at home orders (they are coming).