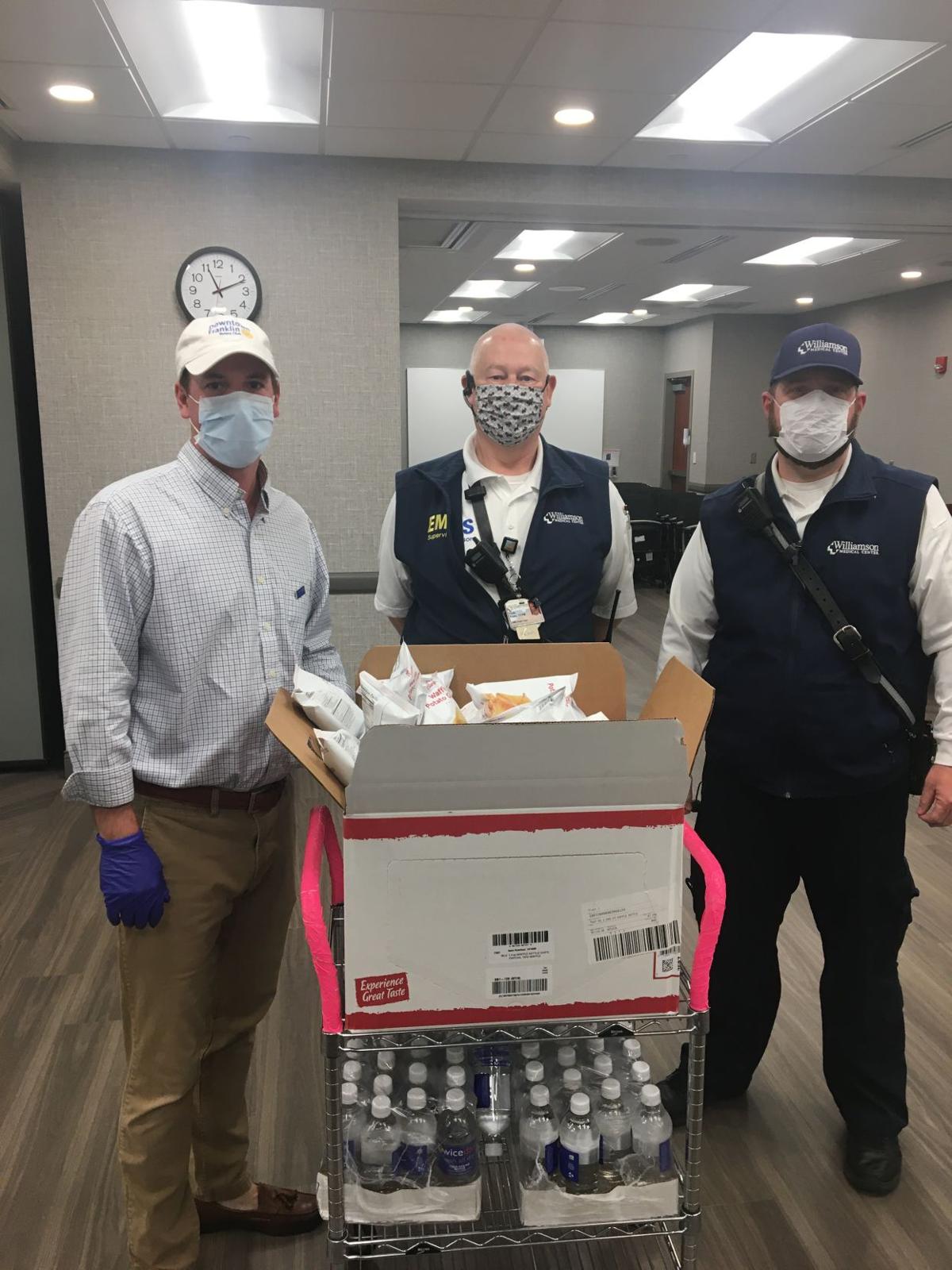 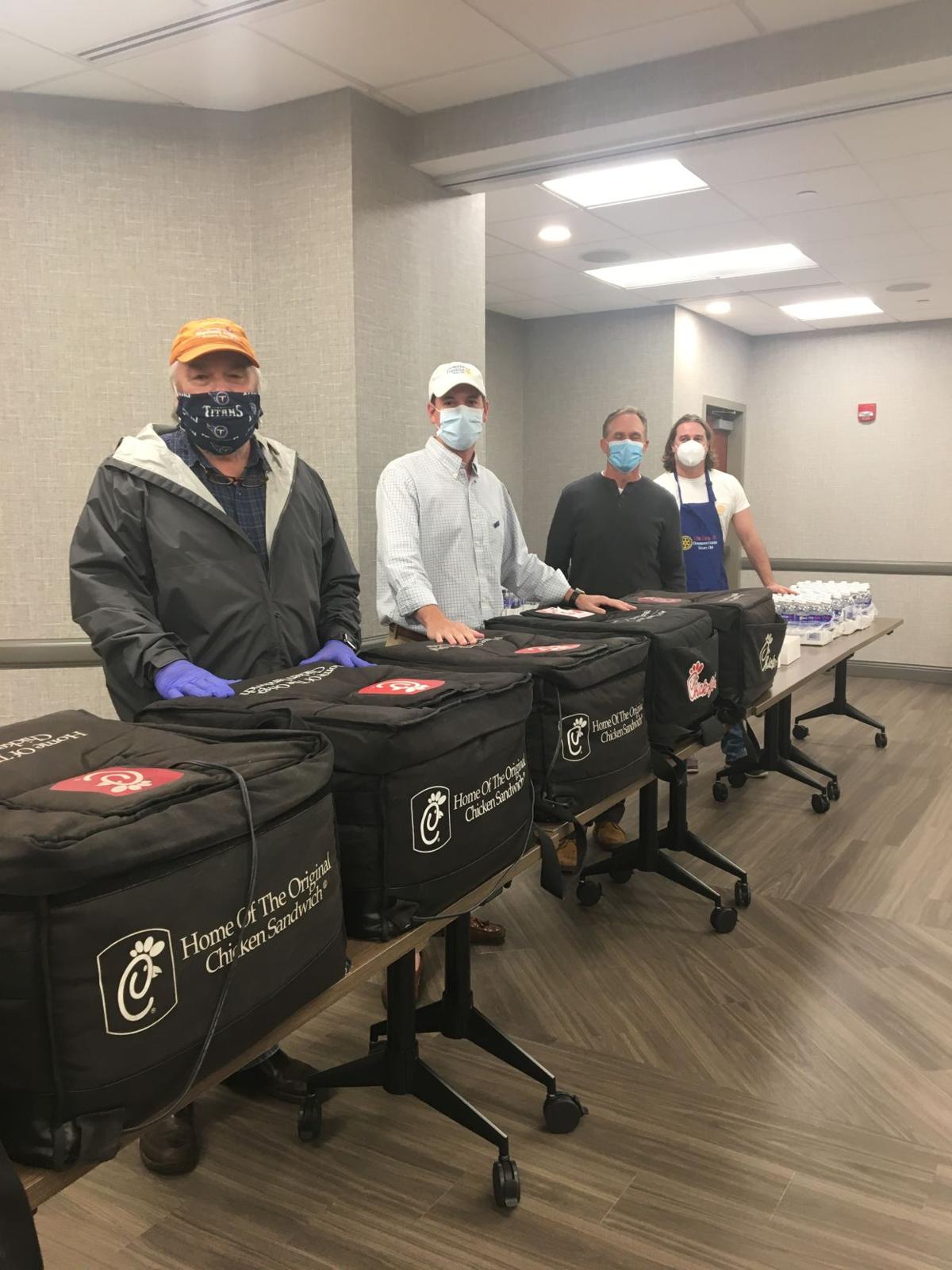 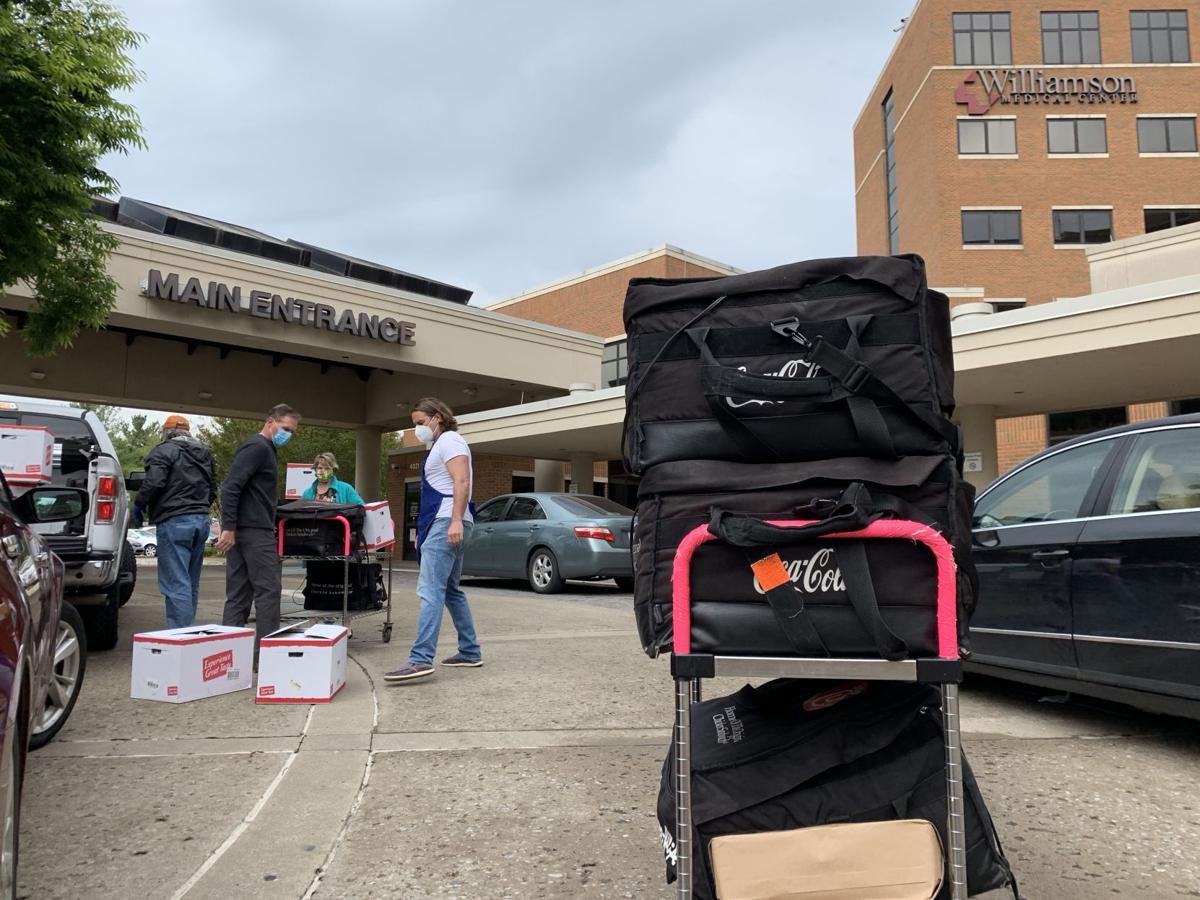 Five Rotary clubs in Williamson County collaborated to provide more than 700 meals to the staff at Williamson Medical Center and EMS teams.

Five Rotary clubs in Williamson County collaborated to provide more than 700 meals to the staff at Williamson Medical Center and EMS teams.

Rotary clubs based in Williamson County have continued to strive toward their motto of “service above self” amid the COVID-19 pandemic.

Cherie Hammond, president of the Brentwood Morning Rotary, said that local Rotarians this year wanted to make Leap Day an extra day of giving together. She said that plans never panned out for that day, but the five clubs were able to fulfill that collective goal on Wednesday of last week by providing meals for front-line workers.

“Our club had been looking for a way to thank the heroes on the front lines at Williamson Medical, and one of our members suggested providing a meal,” said John Reynolds, president of the Downtown Franklin Rotary Club. “To get full coverage of both the day and night shifts, as well as the EMS crews, we asked other clubs in our community if they wanted to help. As expected, every club stepped up.”

The clubs provided more than 500 lunches and 200 dinners from Chick-fil-A and water bottles donated by Twice Daily for hospital staff and EMS.

Throughout the pandemic, several clubs have been utilizing Zoom to conduct their meetings, and a couple of club presidents have said that it has ushered in a time of learning more about each other.

“It gave us this opportunity to really reconnect with each other, and I think that’s important when you have a group that’s made of individuals,” Hammond said. “We can never forget that, really, in order to go and do good, you’ve first got to be doing good within the club, so keeping your membership strong and connected (is important).”

Additionally, Doug Kidd, the president of the Rotary Club of Franklin at Breakfast, said that the club celebrated its 30th anniversary with a discussion about its history over Zoom.

“I joined the club in 2012 and thought I knew a decent amount about the history, and there was so much that I didn’t know in talking to some of the elders that are in the club,” he said.

While continuing to support their charities and encourage their members to serve individually, the clubs also have pursued other service opportunities. For instance, the Franklin Noon and Franklin Breakfast Rotaries each raised several thousand dollars for One Generation Away and GraceWorks Ministries, two organizations that provide food to those in need. The Downtown Franklin Rotary also is working with One Generation Away and Leadership Franklin to collect canned goods for families in need and hosted a barbecue fundraiser benefiting Franktown Open Hearts.

Sarah Johnson, the president of the Brentwood Noon Rotary, said that her Rotary club raised $35,000 for victims of Middle Tennessee’s March 3 tornadoes and will continue to raise money for Saddle Up! and for an inclusion playground in Brentwood.

“We’re very blessed to be in a giving club that truly wants to give to other organizations and do what we can,” Johnson said.

Members in Hammond’s club created cloth masks for people in the community. The Downtown Franklin Rotary continues to support My Friend’s House, has hosted a yard cleanup and posts videos with motivational messages on Facebook and Instagram.

The Franklin Breakfast Rotary also is planning a community kickball tournament for May of next year, the proceeds of which will benefit the club’s charities. Kidd said the goal of this event is to bring the community together and bring new members to the club.

“We are going to make some money from it, but it’s more to bring the community together,” he said. “Folks can get excited about our club, we’ll get more members, hopefully, and then more members (are) doing good in the community.”