The task force was formed in July by the county commission following a public controversy (and an online petition with over 11,000 signatures) over the depiction of a Confederate flag in the upper-left quadrant of the county seal. The task force was charged with determining whether there is “substantial need” to alter the seal, gathering public input and determining the impacts of such a change on business, tourism, social and public interest and finances — all of which is covered in a 30-page report the task force recently released.

In late July, the task force began to collect community feedback on the seal through an online form. According to the final report, the task force received 1,225 responses over three weeks — 52% (638) called for the removal of the flag from the seal, 43% (521) asked for the seal to stay the same, and 5% (66) mentioned some other issue, such as adding another flag to the seal or citing the expense of an alteration.

Some citizens said the Confederate flag is “negative, hurtful and extremely racist,” akin to “a Nazi logo;” glorifies “a time of history that would be very dark for a person of color;” and “references a time that was degrading and belittling to many African Americans.”

“Regardless of what the flag was intended to be, it has become a symbol of racism; a symbol to those of color that they’re not welcome, accepted, or equal. It is divisive and does not unite us as a community,” one citizen wrote.

Others, however, expressed that to remove the flag and “abandon our history” would be “counter-productive,” saying that the flag is a symbol of “heritage, not hate” and that Confederate soldiers fought for “state’s rights, not slavery.”

“Thousands died defending their homes,” a citizen wrote. “They deserve to be respected and remembered.”

Still others evaded both of these camps of thought, saying that “concerns about county debt should outweigh this as a priority.”

In addition to gaining feedback in this way, the task force welcomed two citizens — Dustin Koctar, who created the online petition for the removal of the flag, and Mike Plumley, a Vietnam veteran in favor of leaving the seal as is — to share their views publicly on Tuesday, Aug. 11.

Locally, a recent example of change is Franklin High School’s renaming of its former Rebels mascot to the Admirals. Beyond Williamson County, Mississippi recently changed its state flag, which contained the Confederate flag in its design, and even more broadly, NASCAR banned the Confederate flag from its races. U.S. Secretary of Defense Mark Esper also effectively banned the flag from all military installations in July.

In terms of business impacts, the report states that businesses value the welcoming and inclusive nature of a community, as such a culture influences a business’s ability to “attract and retain the best talent.”

“In working to create the kind of community where a talented workforce wants to live and work, it is important to ensure that anything that suggests that a community is not welcoming or inclusive is addressed,” the report reads.

The report again mentions the former flag of Mississippi, sharing the economic consequences of the state’s refusal to alter the flag for so many years — the NCAA did not allow championship events in the state until the flag was removed, Walmart refused to display the flag in its stores and the Mississippi Baptist Convention called for the alteration of the flag.

“As seen in Mississippi, when a community fails to create and cultivate an inclusive environment, citizens begin to relocate because they do not feel welcome,” the report states. “That exodus of talent creates major challenges for businesses and local economies.”

The report cites “government stability and pro-business posture” as reasons some businesses have chosen Williamson County as their home, but further states that those qualities, while important, are “not enough.” Though the county seal may not have been a deterrent for major companies like Nissan, Mitsubishi Motors and Mars Petcare when they decided to build their headquarters in Williamson County, all three of those companies, in addition to 13 other businesses and organizations with local ties, have endorsed a letter to the county calling for the flag’s removal from the seal.

“We do not believe this seal, created in 1968, represents who we are as a county today,” the letter reads. “This is a significant issue for our companies and employees who call Williamson County home. … We believe the seal is long overdue for an update, and now is the time to take swift action to redesign the seal and remove the flag.”

The seal doesn’t currently impact tourism, but it could now

From a tourism perspective, the report states that the seal has not previously been known to impact this sector.

In 2019, Williamson County welcomed over 1.8 million visitors, and survey data from that year shows that visiting a historic site or attraction was on the docket for about 46% of those visitors, listed as a more popular activity than live music but less popular than local dining, shopping and scenic drives. Additionally, the Carter House, drawing 20% of visitors, is the only Civil War attraction listed in the top five most popular Williamson County attractions in 2019 with a potential argument for Main Street due to the Confederate monument and Fuller Story markers in the Franklin Public Square. Finally, 8% of survey respondents listed historic sites as their most-liked aspect of Franklin and Williamson County.

The report states while the county seal “was not given as a reason for visiting and/or learning about the history of the county,” one concern is that news of this controversy could portray the county “in a negative light,” leading to economic loss on both tourism and business fronts.

“Now that the presence of the Confederate flag is a public issue in our community, keeping the flag on the county seal puts our ability to attract top talent, and to compete for existing company expansion and new company relocation, at risk,” the report reads.

Finally, the report estimates that an alteration of the seal could cost the county $125,000. For reference, this is less than 74% of the county mayor’s annual salary and less than 0.02% of the county’s total budget for this year.

The report itemizes this number, showing that $27,333 of that total would go towards the removal of the seal from county property — the tile floor of the judicial center, over 430 vehicles, various signs, podiums, buildings and more — and nearly $96,000 is associated with the replacement of the seal on county property — all previously listed properties plus uniforms, flags, letterhead and more.

The county commission will vote on a resolution to adopt the task force’s report, including its recommendation to remove the flag from the seal, during its Sept. 14 meeting.

Should the resolution pass, Williamson County Mayor Rogers Anderson would then submit a request to the Tennessee Historical Commission to modify the seal, a process deemed necessary by County Attorney Jeff Moseley, who has stated that the seal, due to its inclusion of Civil War symbols, constitutes a “memorial” and is under state jurisdiction.

In order for the county to modify the seal, the state commission would have to approve the request by a two-thirds majority vote, and the decision concerning the seal’s final design would again be in the hands of the county commission.

Read the full report below, or find more information at WilliamsonCounty-TN.gov. 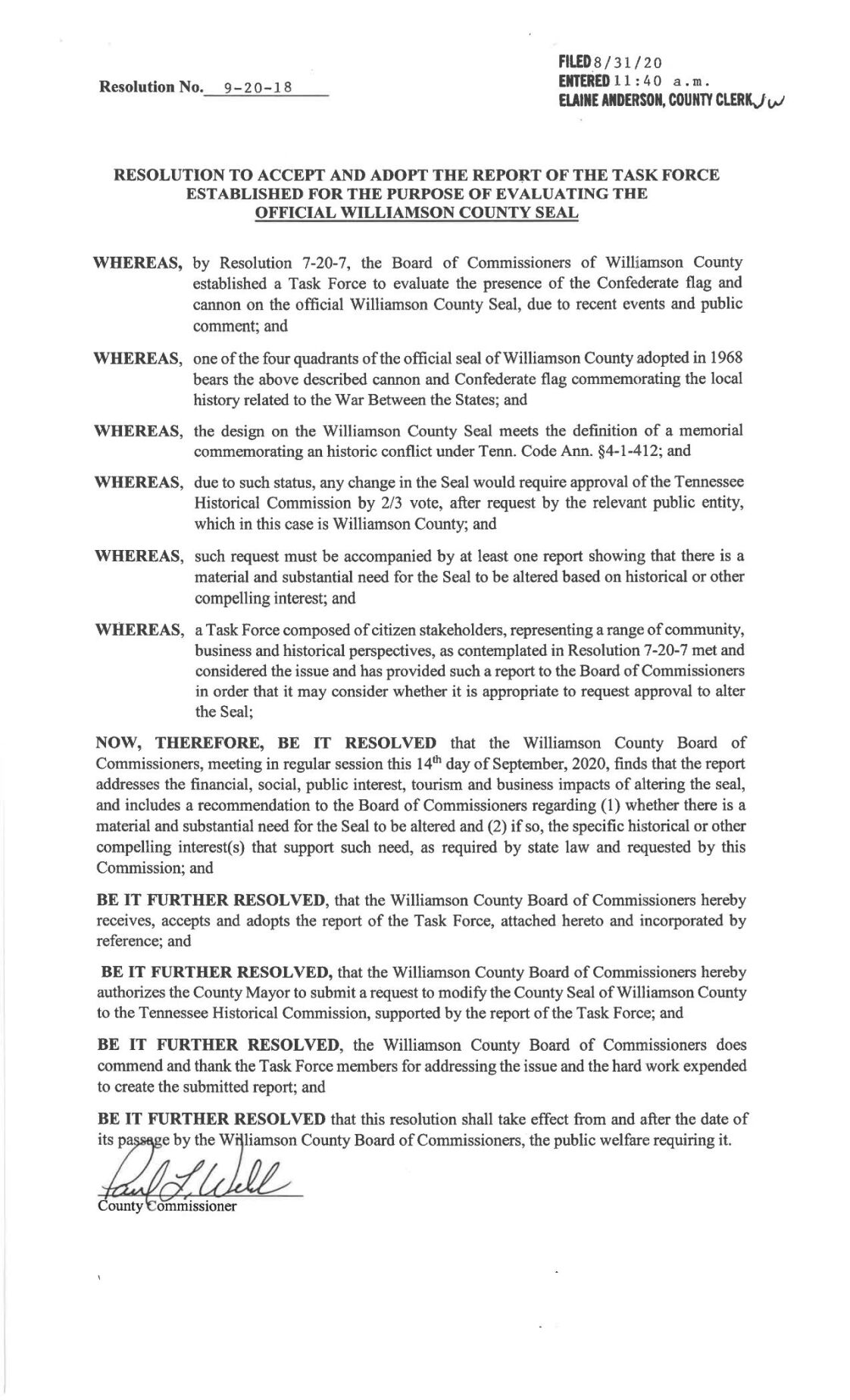 The outcome of this Task Force was determined at the time they were selected. Many of this group are very liberal with previous statements indicating their distain for the County Seal and also "Chip" on the Square. The ultimate goal is the removal of the Statue from the square. Mr. Koctar has made that clear.

An online petition is a farce. Who varies these names and where they live. Why keep mentioning it. It means nothing regardless of which side of the issue it is done.

Right on, CollegeGrover! Just like Shane Pantall at Franklin High School was hired specifically to change the Rebels mascot, this county committee was appointed to change the seal. No democracy or representative republic here - just another top down, power play. Wonder how many 'transplants' were on this committee? Again, no names! The county commissioners who vote to change the seal will only serve to give notice to the next 'offended' group of their 'rights' to change the bottom left portion of the seal..... a 'christian flag in a stained glass church window'! Nissan and Mars don't care about history, just about their bottom line! And, spineless politicians will melt like butter.