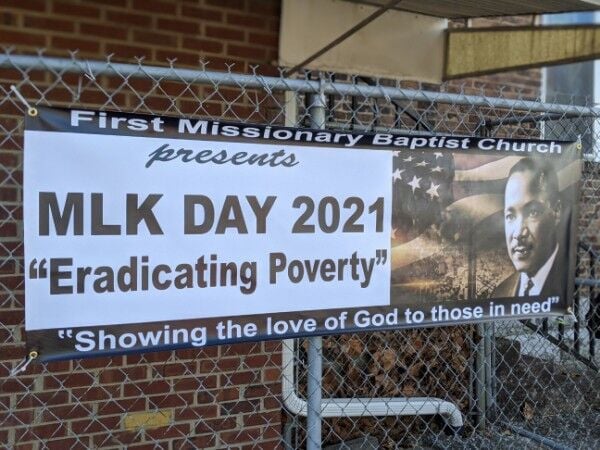 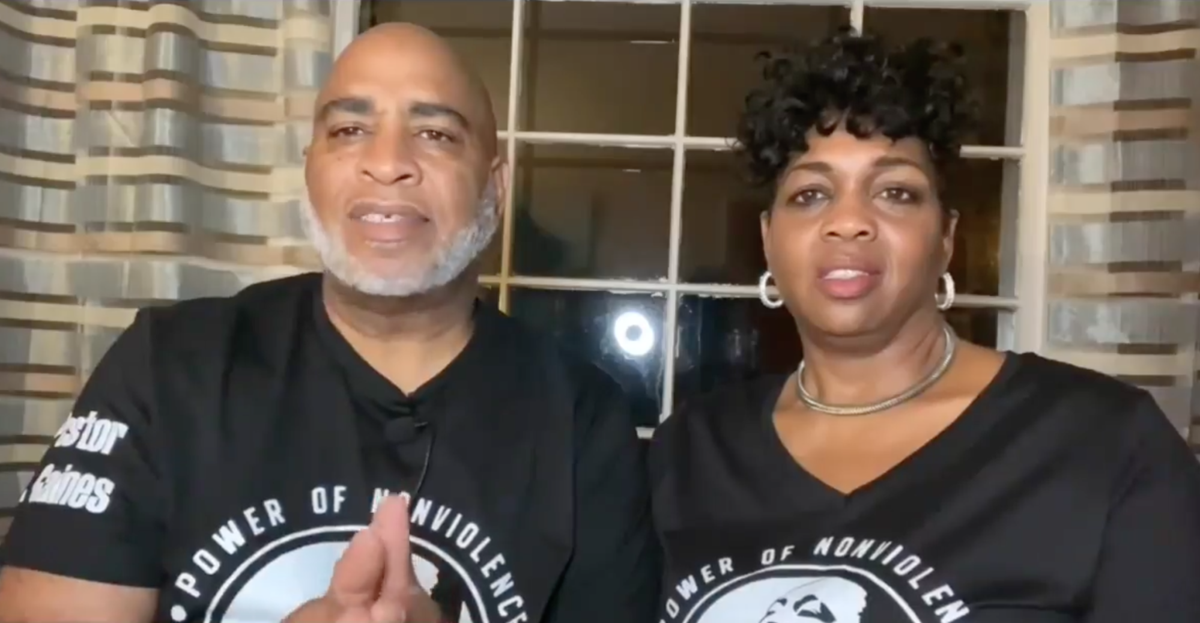 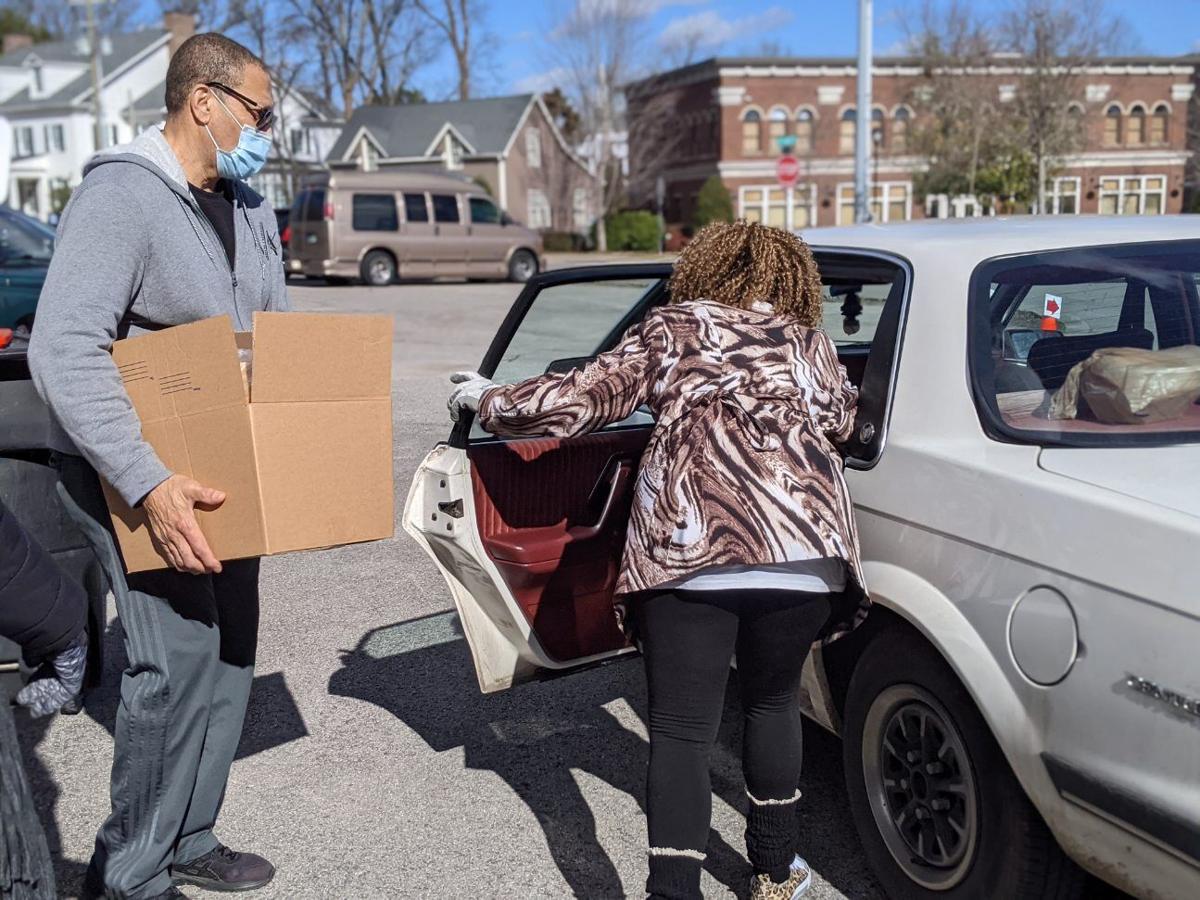 Volunteers at First Missionary Baptist Church in Franklin load food boxes into the cars of those in need. 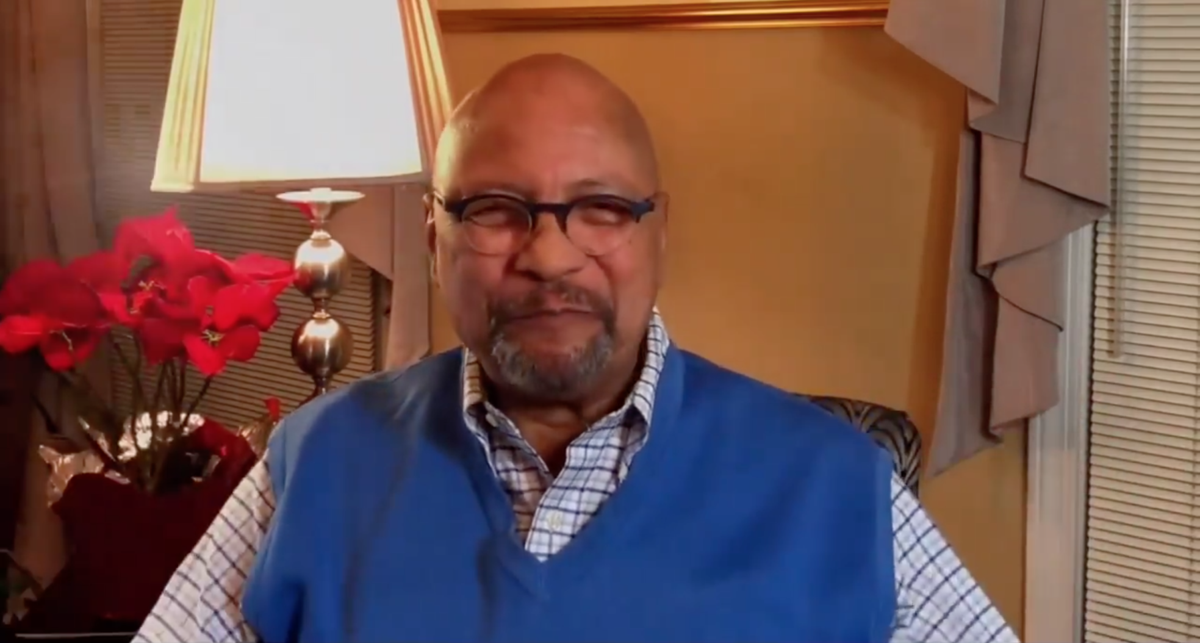 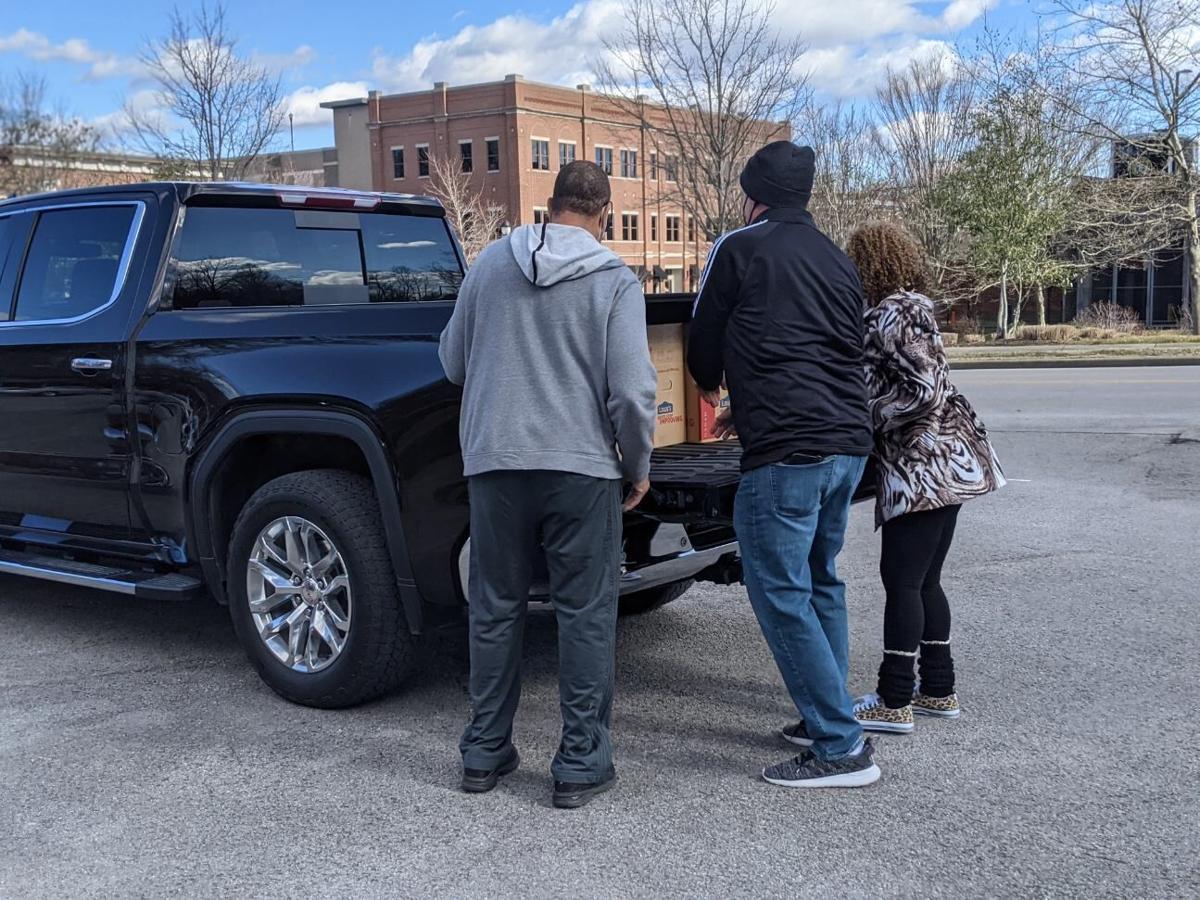 Some people who drove through the food distribution line just needed one box; others took several to feed their families. 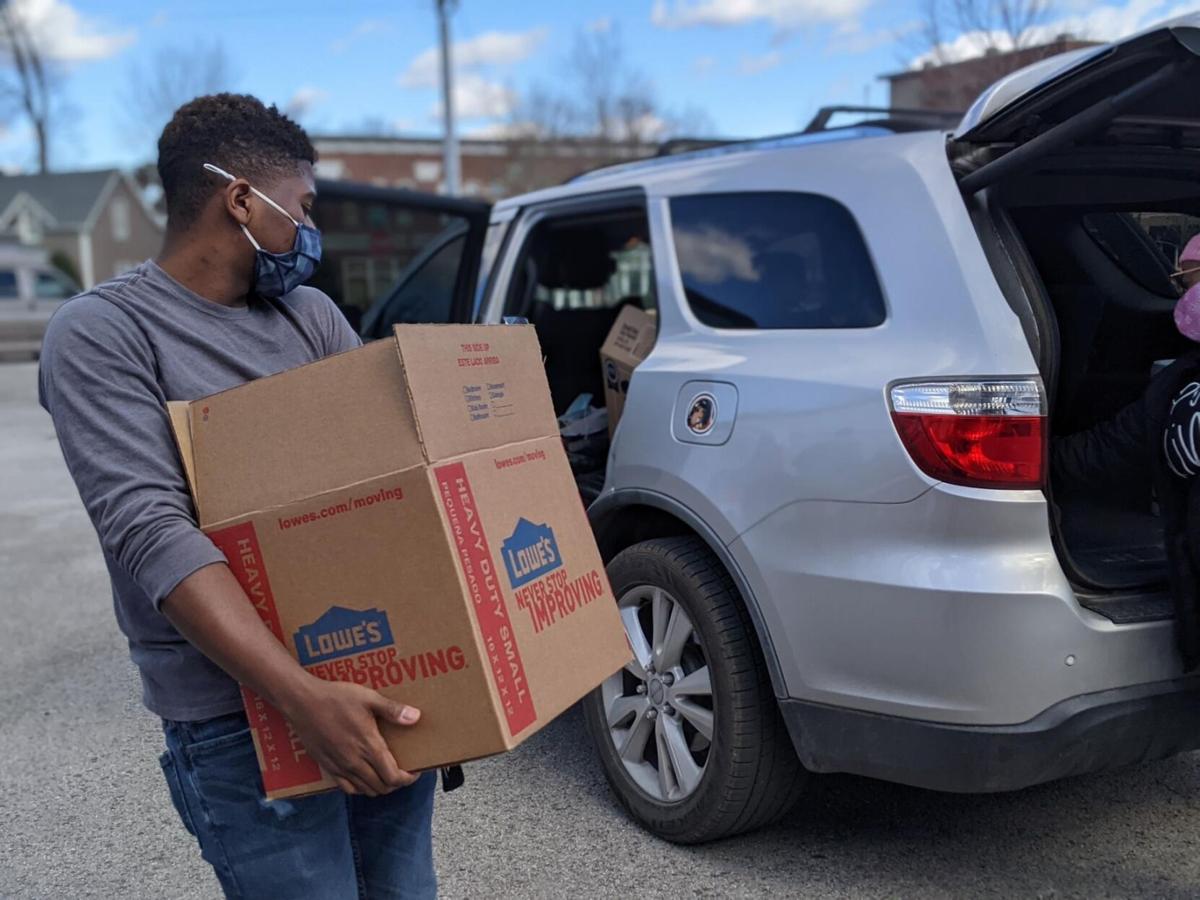 In all, First Missionary Baptist Church had 110 food boxes to give away.

Volunteers at First Missionary Baptist Church in Franklin load food boxes into the cars of those in need.

Some people who drove through the food distribution line just needed one box; others took several to feed their families.

In all, First Missionary Baptist Church had 110 food boxes to give away.

Normally, cheers and chants and choruses can be heard in the morning and early afternoon as the community marches from First Missionary Baptist Church to the Franklin Public Square to celebrate MLK’s legacy and his messages of unity and equity.

This year, all that could be heard at First Missionary on Monday was the quiet rumble of cars, occasional chatter and praise music singing through cell phone speakers, but the spirit of unity was alive all the same.

The MLK celebration took place virtually on the First Missionary Facebook page at 11 a.m. with a theme of eradicating poverty. Timothy Gaines, pastor of First Missionary, shared during the online program a quotation from King’s “American Dream” speech of 1961: “As long as there is poverty in this world, no man can be totally rich, even if he has a billion dollars.”

“During the past MLK celebrations here at FMBC, we have been intentional in order to promote unity — unity amongst the different races as well as unity amongst different denominations,” Gaines said. “But this year, although we are indeed still promoting unity, … we are promoting unity as a way to eradicate poverty, hunger, especially within the city of Franklin, Williamson County.”

Following the virtual event, First Missionary opened its parking lot at noon to the community to hold a drive-thru food distribution for those in need. Just over 20 volunteers from First Missionary and other local churches gathered to distribute 110 food boxes provided by One Generation Away to those driving through.

While some only needed a box or two for their households, the volunteers generously stuffed some cars with as many boxes as could fit, depending on the drivers’ requests.

This distribution followed a message from Kenneth Hill, pastor of Shorter Chapel AME Church in Franklin and guest speaker during the virtual MLK Day event, encouraging the community to “stay woke.”

“In recent years, the hashtag ‘#StayWoke’ has become an important cultural term,” Hill said. “As great words often do, it originated in poetry and music from singer-songwriter Erykah Badu and her 2008 song ‘Master Teacher,’ which uses the refrain ‘I stay woke, I stay woke’ over and over again, more recently sung by Childish Gambino.”

Hill referenced scripture passages about Jesus’ disciples falling asleep in the Garden of Gethsemane while he went off alone to pray, after which Jesus asked them: “Are you asleep? Could you not keep watch for one hour?”

“‘Stay woke’ as a phrase is a call to pay attention, to be aware of what is going on,” Hill said. “It implies being aware of systemic injustice. It implies engaging in critical thinking about our society. We sometimes call it being aware of sin or evil in our world and in ourselves. Stay woke. ‘Stay woke’ is an invocation that is not unlike the one that Dr. King and Jesus gave. It is an invocation to live with our eyes wide open.”

He referenced King’s 1968 speech “Remaining Awake Through a Great Revolution,” which tells the story of Rip Van Winkle sleeping through 20 years of societal changes. In the generations since King’s death in the same year of that speech, societal changes have occurred “while we were sleeping,” and Hill said it’s time to wake up.

“While we were sleeping, 51% of all children in American public schools became eligible for free and reduced lunch (nearly 53% nationwide and 59% in Tennessee as of 2018),” Hill said. “While we were sleeping, teenage suicide in Franklin, Tennessee, is the highest ever; … one in five children in America grew up in poverty (18% as of 2018); … militarized mass police violence included tear gas, rubber bullets and pepper spray.

Hill said some have been “asleep” to these realities, and some still are, but he encouraged the community to “stay woke” in 2021.

“Perhaps the time has gone for us to be able to sleep comfortably in our enclaves of implicit bias within our neighborhoods, where we need not see diversity,” he said. “Perhaps the day is done where we could sleep through this great and radical change in our society, where the best articulations of the American dream have become yet a nightmare for some. Perhaps it’s time for us to wake up and to face the day as it is.”

So disappointing to the Pastor trash our fine law enforcement officials.